It has been a difficult few weeks for Kieran Trippier. The right back, so widely praised for his performances both at club and international level last season, has come under criticism for questionable defending and a lack of impact in attack.

In recent games against Manchester City and Liverpool, and the Champions League defeat to Ajax, Trippier’s struggles were highlighted. And the general consensus is that he has been unable to maintain the high standards he set last season.

“He is not a good enough defender,” Graeme Souness said on Sky Sports last month, after Trippier had been tormented by Liverpool’s Andy Robertson in a 2-1 defeat at Anfield. Jermaine Jenas was equally critical of the Spurs right back, too, after their Champions League quarter-final at the Etihad.

“This season I have not done as well as I could have done,” Trippier told BBC Radio 5 Live Sport last month. “The first half [of the season] has been frustrating for me and I can do so much better. It's just one of those things that I take as a player and I can only learn from it.”

It seems strange, then, that Trippier has been so heavily linked with a move to Manchester United. And, according to Sky Italia, he is on the radar of both Juventus and Inter.

Clearly, Trippier is still performing with enough consistency to attract interest from some of Europe’s elite. He has, perhaps, been the victim of his own success. There was an inevitable dip in form after his impressive World Cup campaign – in which he helped England to the semi-finals – but he remains one of the best attacking full-backs in the Premier League.

In certain areas of his game, Trippier has actually been more productive this season than last. He has completed more than twice as many crosses per game, from 1.08 to 2.22 and has a higher expected goals assisted per 90 – 0.2 compared with 0.17 last season. 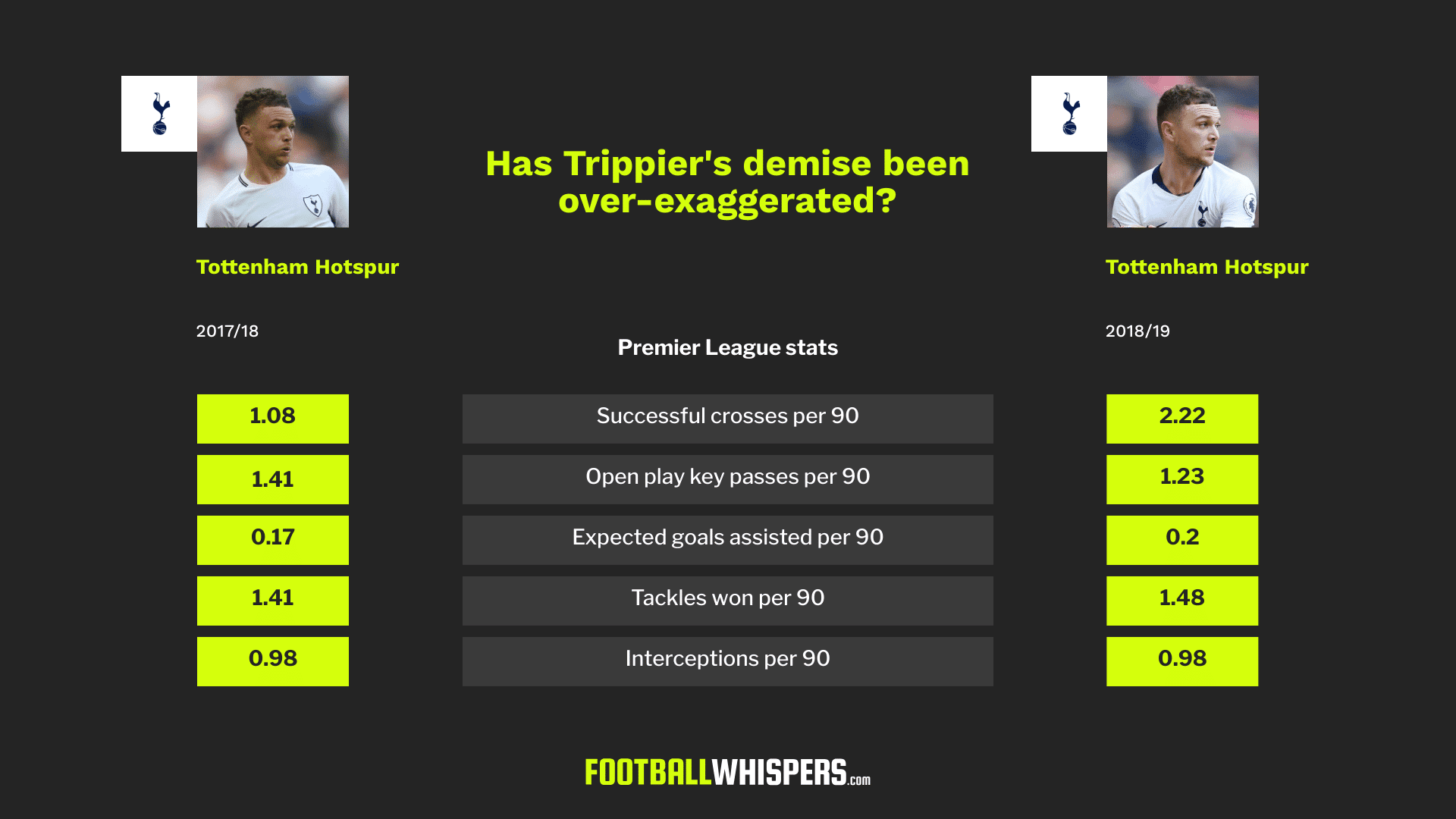 The creative side of Trippier’s game, then, has not been the big problem. He still provides Spurs with an outlet on the right flank and still occupies the opposition left back.

The more concerning aspect of the 28-year-old’s game this season has been his defensive vulnerabilities. Positionally, he has been caught out on numerous occasions, notably when he allowed Manchester City's Raheem Sterling to cut inside unchallenged and shoot into the bottom corner in the Champions League.

There has been a drop off in Trippier’s numbers defensively, too. He has won an average of 5.1 defensive duels per 90 minutes, down from 5.64 last season. He is attempting more tackles – 2.63 per 90 to 2.44 – and that suggests he is being forced into more defending because of poor positioning.

“It’s like no different full-back in the world,” Mauricio Pochettino said after Tottenham’s 3-2 win against Wolves in November. “When you are in possession and go forward, you need to be strong too when you are in a defensive situation. We always compensate.

“We provide him with the platform to go forward because we create the system and dynamic to put him in the best position to play. In a different situation, I think he is a full-back, not a winger. Kieran needs to improve in the defensive situation.”

Trippier, though, has always been an attack-minded full back. He has never been the most accomplished defender, never one to delay an attacking run in the fear that it might leave him exposed at the back.

During the World Cup, it was Trippier’s delivery from wide areas, his potency from set pieces, that caught the eye, not perfectly-timed tackles or last-ditch interceptions. His defensive work is a legitimate concern, of course, but perhaps too much emphasis has been placed on it of late.

Trippier, as an offensive full back, is still amongst the most consistent in the Premier League. That is why, despite recent criticism, he is a target for top clubs in England and Italy.

If he can cut out the mistakes, it won’t be long until the focus shifts, once again, to what he can offer in attack.