It's been a strange 12 months for Kieran Trippier, but even he must wonder how he's got here.

A year ago the Tottenham Hotspur full-back was the toast of the country after his Bend it like Beckham moment put England in front against Croatia in their World Cup semi-final in Russia.

Glorious failure, of course, greeted England. Trippier's season with Spurs followed a similar path as he struggled to build on his World Cup showings for the Champions League finalists.

By the end of the campaign, widespread reports claimed Juventus and Napoli were keen on the 28-year-old. Atlético Madrid entered the race before Bayern Munich completed a quartet of European giants surprisingly chasing the Spurs man.

Trippier has joined Atlético in a £20million deal. For a player who cost a meagre £3.5million from Burnley in June 2015, this will surely go down as another Daniel Levy masterstroke.

Spurs supporters are unlikely to feel Trippier's loss too badly, however. The full-back's form for the Three Lions was not mirrored once he returned to club football and it speaks volumes for how Serge Aurier is viewed in North London that Trippier largely held onto his spot on the side despite inconsistent displays.

All of which begs the question: Why do Atlético, arguably the most defensively organised and robust side in Europe, want Trippier so badly?

Only Valencia (0.92) conceded fewer big chances per game than Atléti (1.1) in LaLiga last season while no-one had a meaner defence – just 29 goals conceded at a rate of 0.76 per game; enough to win Jan Oblak the Zamora Trophy for the most clean sheets in Spain once more.

The simple answer to the question is that Juanfran, the dependable Spaniard who made 355 appearances for Los Colchoneros, is moving onto pastures new this summer. Šime Vrsaljko is back from his loan spell at Internazionale but is no more an option than when he left. There is a vacancy at right-back. 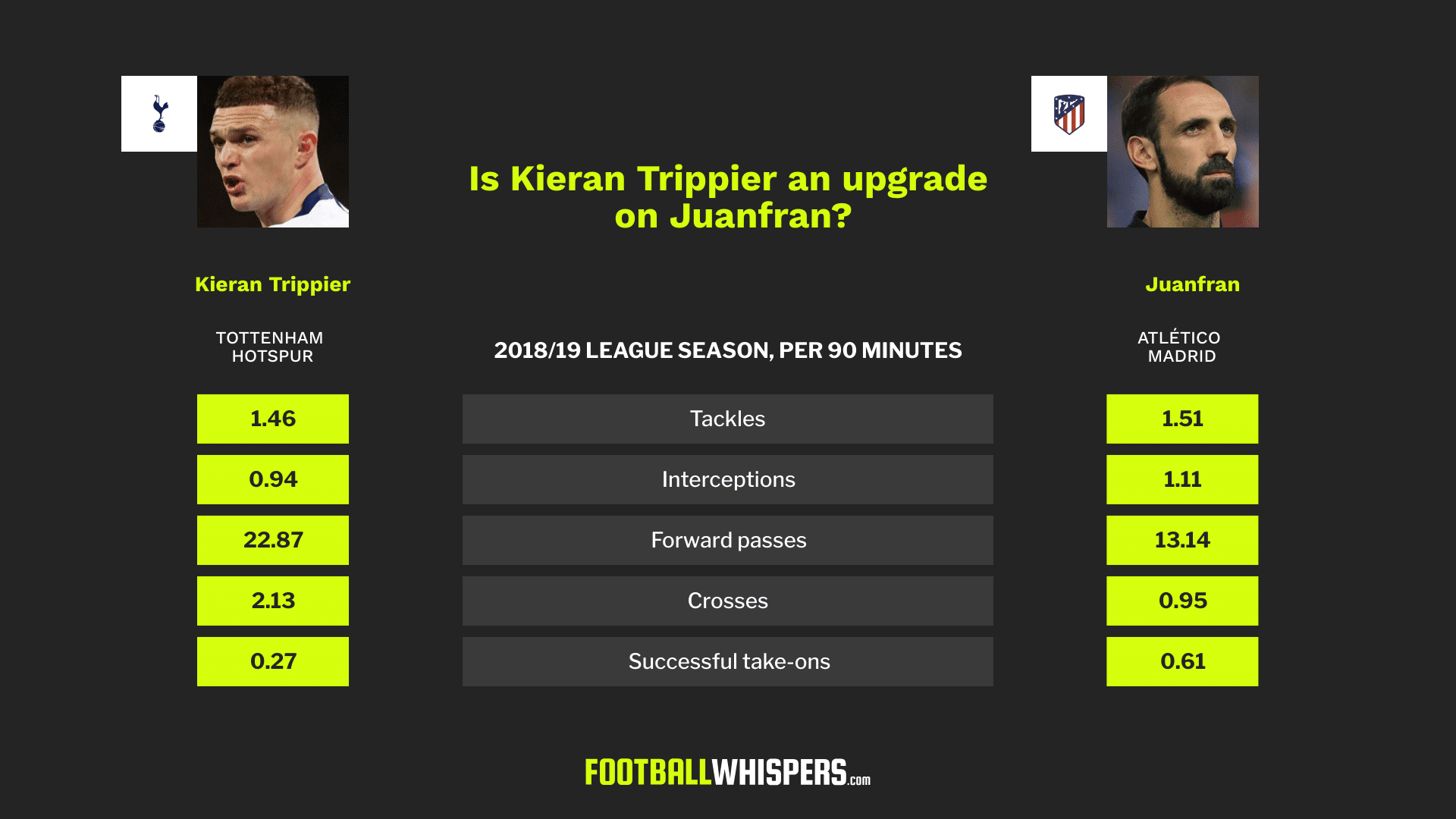 Comparing Trippier and Juanfran statistically doesn't throw up anything too surprising. The Atleti-bound defender is only just behind the veteran Spaniard for tackles and interceptions per 90, while he has the upper-hand for forward passes and crosses.

With Atlético coach Diego Simeone employing a very rigid, structured, safety-first approach when setting his side up, the full-backs were not permitted the same licence to get forward that Trippier was at Tottenham. Although Juanfran had a higher success rate with dribbles and attempted more (1.17 vs. 0.59) per 90.

Using Football Whispers' exclusive Player Persona tool, which groups actions into certain traits based on a player's statistical output, we can see how they compare – and there's a strong similarity.

Using the Team Persona tool we can compare the two teams' styles. This is where the stark difference between Spurs and Atleti comes to the fore.

The Premier League outfit are defined by high possession, fast attacking and conceding chances. Atlético, meanwhile, base their game around volume of chances, long balls and crosses. Crucially, that last trait could be why Trippier has been identified as the man to succeed Juanfran.

Trippier was second among Premier League full-backs for completed crosses per 90 last season with 2.13. Atlético, however, managed just 3.47 per 90, putting them an underwhelming 17th among their LaLiga counterparts.

Not that Trippier would be the panacea for Atlético's struggle to get the ball into good area. His reputation as a fine crosser now proceeds him but the reality can be somewhat different; too often he makes the wrong choice or gets closed down.

While the former Manchester City trainee's crossing his long been lauded – his 14 assists as Burnley won promotion in 2013/14 testament to that quality – he's not managed more than five in the Premier League since and last term recorded just three for Pochettino's side.

Assists do not paint the complete picture, though, as they're reliant on the recipient finishing the chance.

A more accurate reflection of his chance creating ability might be the 0.31 big chances he created per 90 last season (eighth in the Premier League) or 1.18 open-play shot assists he provided for team-mates. 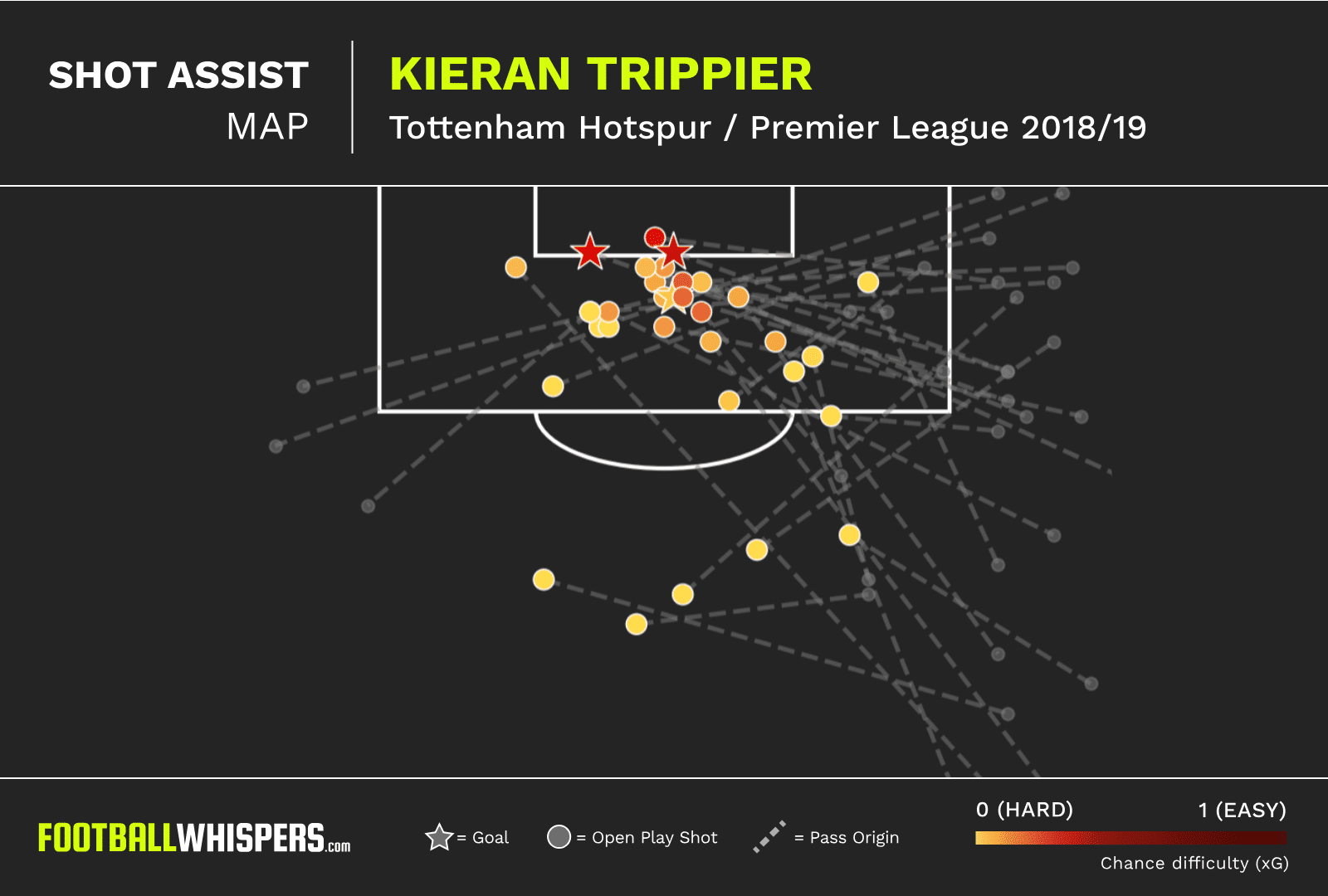 Both of which are ‘nice to haves'. But an essential of playing in Simeone's Atlético side is being reliable, resolute and defensively sound. Trippier is not all of those things consistently. His lack of pace means he struggles to get out to wingers in time to close them down while his defensive lapses have become increasingly noticeable.

Take his error for Ajax‘s second goal in the away leg of Tottenham's Champions League semi-final. He meekly surrendered possession to Donny van de Beek and allowed the Dutch outfit to break and double their lead through Hakim Ziyech. That sort of mistake would not be tolerated by Simeone.

With three members of their regular back four departing this summer – Diego Godín and Lucas Hernández are following Juanfran out the exit to Internazionale and Bayern Munich respectively– Atlético are at a crossroads and they cannot afford any missteps in their rebuild. Trippier could prove to be exactly that.