Kieran Tierney broke out at Celtic as a energetic, attack-minded full-back. He provided relief in a key position; with Emilio Izaguirre’s time at the club winding down, the youngster offered a long-term solution on the left-hand side of the back four.

His initial rise was exciting but ultimately straightforward – a sign of the times. The Scottish giants dominated the domestic scene almost by default at that time. Fierce rivals Rangers were in the second tier and had been outside of the top division for three years.

Without serious competition, the Bhoys romped to consecutive titles despite question marks over the true managerial nous of Ronny Deila.

And then came Brendan Rodgers.

Not only did he lead Celtic to an exceptional season undefeated domestically in 2016/17, but he also strengthened the team’s chances of progress in Europe.

Tierney has been one of the major individual benefactors of Rodgers’ ideas. The 20-year-old has, over the course of the last 18 months or so, become a more versatile operator.

No longer is he restricted to the left flank as a flying full-back; now it seems he can play almost anywhere.

His progress has led to renewed speculation about his future. The Daily Record recently reported that he is a Manchester United target.

José Mourinho has purportedly been keeping tabs on the player, having sent scouts to monitor his performances. The rumours make sense considering the Premier League side are in need of a left-back.

But, as Rodgers’ tactical experimentation and subsequent success has shown, Tierney isn’t just a left-back.

Every single one of Tierney’s appearances during his breakout campaign in 2015/16 came as a left-back. Last term he was utilised twice as both a centre-back and a left winger during 40 games for Celtic.

So far this season he has played four times in central defence and once in a more advanced role on the left wing in 17 outings.

Evidently, the rate at which the Scottish prospect is being deployed in different roles has increased. From his first to his third year of top-level football, his percentage of game time in positions other than left-back has gone from zero to ten to 29 per cent. His talents are increasingly being utilised in different ways.

To those who have only watched Tierney while playing on the left of a back four, his usage in other areas won’t make sense. He is a classic contemporary full-back, someone who loves to raid forward, overlap down the flank and supply dangerous crosses for the strikers.

His former team-mate Kolo Touré recently said that, “He defends, he goes forward, he is every inch the modern left back.”

He understands when to time his runs and has the technique to provide quality in the final third from a wider position. An example of this is illustrated in the below graphic, where he is seen overlapping down the outside of the opposition defence.

He goes on to play a perfectly weighted ball for his central advancing team-mate to finish. 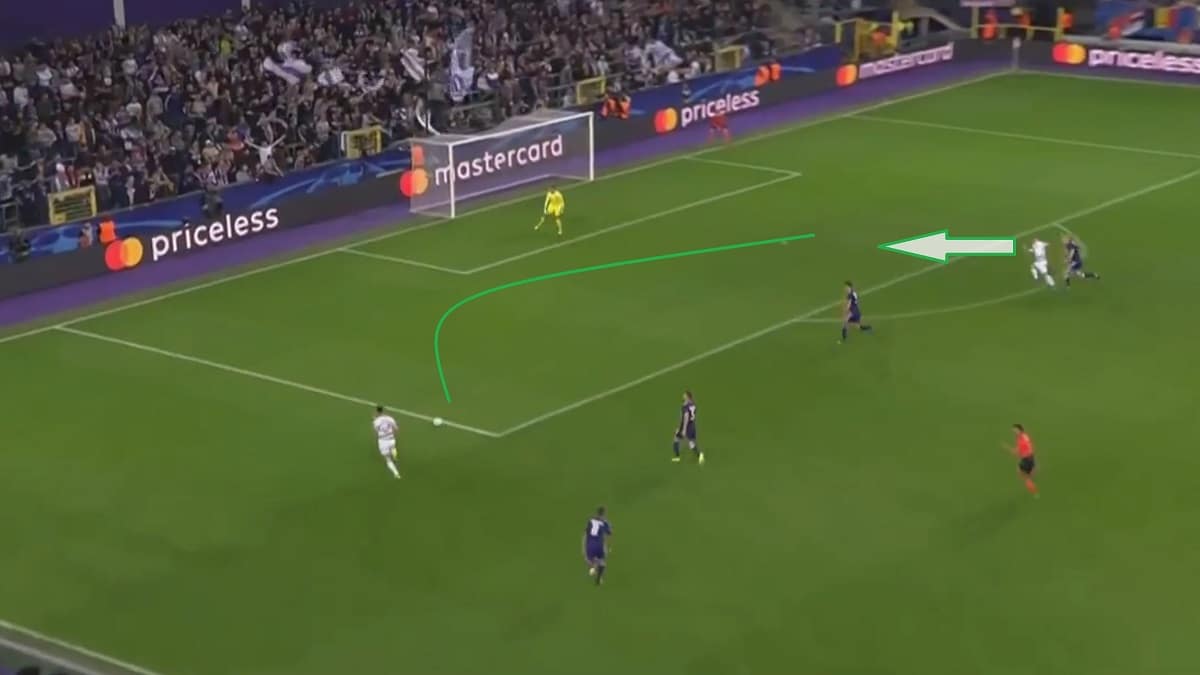 However, Tierney is a varied attacking full-back. He likes to underlap, driving forward in the channel, and he is also happy to adopt a more withdrawn role when appropriate.

Sometimes the 20-year-old will make positive runs on the blind side of the opposition midfield line to help Celtic play through pressure; at other times he comes infield to receive the ball and play passes of his own.

As shown below, he is an astute playmaker. Taking possession in a more central area, he opts against dribbling forward and instead plays an incisive pass between the opposition’s right-back and right-sided centre-back for Scott Sinclair to run onto. 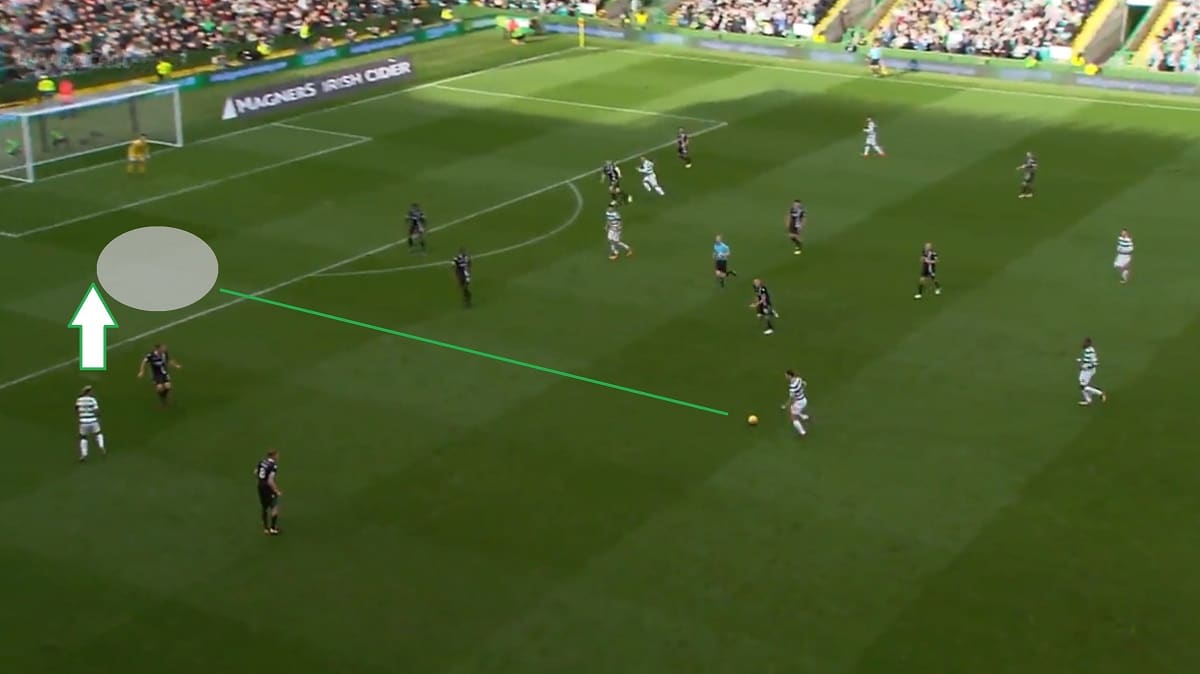 Tierney’s quality going forward has been cemented during his time at right-back, a position he has played several times for Scotland. In a national team pool loaded with quality left-backs, including Liverpool’s Andrew Robertson, he has performed aptly on the other side.

Playing on the right would be an issue for many natural left-sided full-backs, as they would feel as comfortable galloping down the wing on their weaker foot. However, the Celtic youngster finds other ways to attack, often cutting inside to combine with team-mates, dribble into more central areas or, if in the final third, shoot.

In the below still he is seen playing at right-back for Scotland against Malta. Here he cuts in from the right and, having distracted the opposition defence, looks to play a clever through ball for his striking team-mate to run onto.

In this case the move didn’t work out but the intent was laudable. 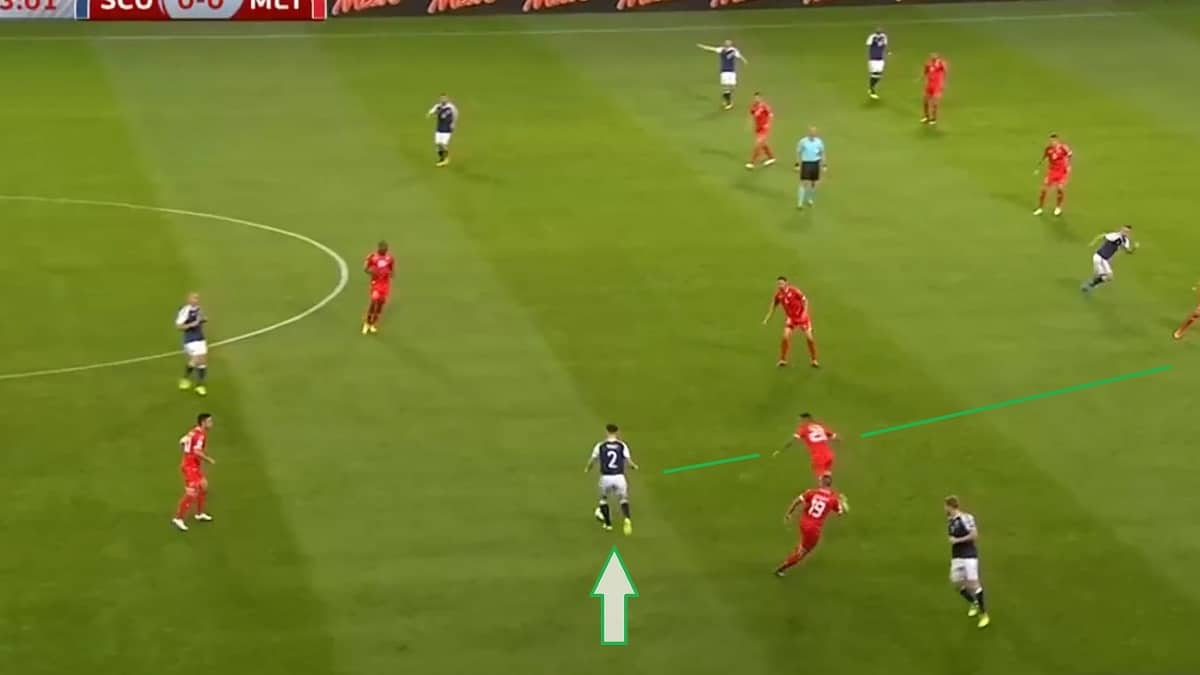 Tierney’s ability on the ball is suggestive of someone who could play as an attack-minded full-back or winger on either flank. He could also use those same playmaking gifts to operate effectively in an offensive central midfield role.

But his future may well lie in a more conservative central position.

WHERE WILL TIERNEY END UP?

Tierney has impressed during his time at centre-back, and his all-round abilities may indeed be best deployed on the left of a back three.

From this position, which he has already taken up for Celtic at times, he would be able to see the whole game in front of him. He could also drive forward to provoke pressure from the opposition and disrupt their defensive shape or simply to break the lines himself.

From a left-sided centre-back role, his penetrative dribbling and passing range would be maximised.

This is highlighted in the graphic below, where he receives the ball from Dedryck Boyata before breaking two lines with a penetrative forward pass into the channel for the Moussa Dembélé.

Tierney has also proven himself to be an attentive marker with the pace to recover quickly if necessary, traits that would help were he to occupy the role more consistently in future. 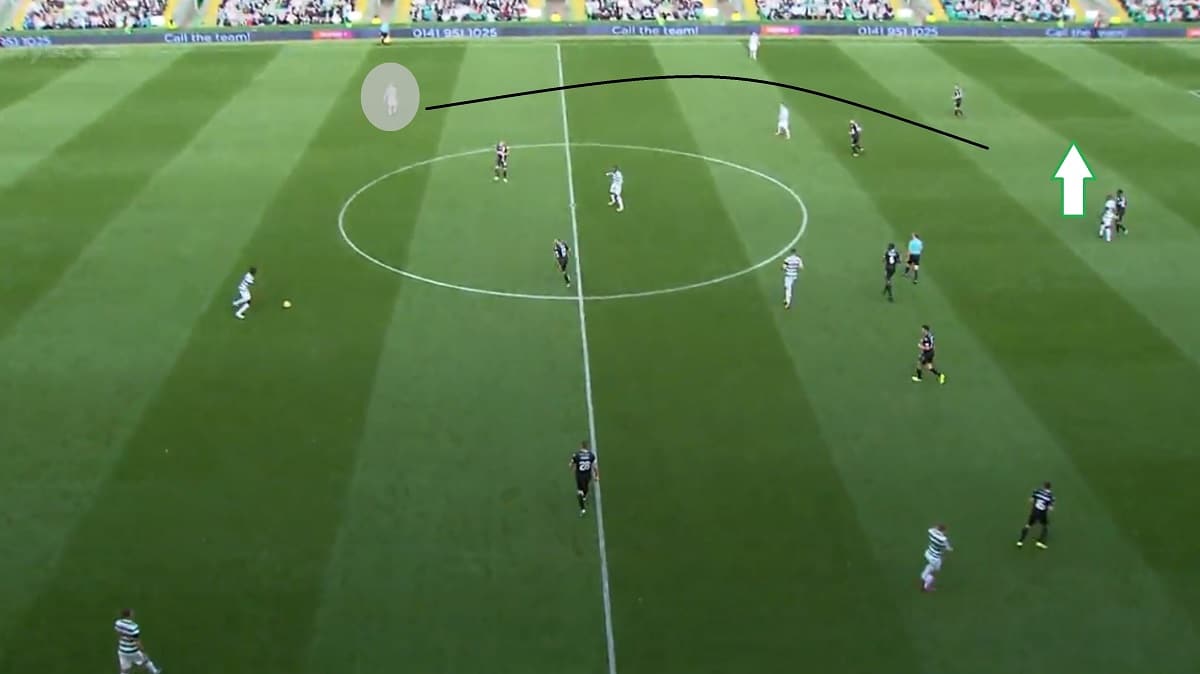 He played in the position for Scotland against England in their World Cup qualifier at Hampden and handled himself well defensively, stating after the game: “Being told you are playing centre-back and you have not done it too many times, it is obviously hard. But it is something I enjoy. It was a new challenge…I like new challenges so it was good.”

Tierney’s manager at club level also believes in the possibilities he offers at centre-back.

Following a friendly against Slavia Prague in July, Rodgers said: “He can play on the outside of a back three absolutely no problem. He can sit in there and serve, he wants the ball, he can play…He has good ideas and he is gaining confidence in passing and playing – he is a big talent.

“He is getting better under pressure. The other night there were a couple of times when he would just have got rid of it. Instead he had composure and made the pass. You need to have that when you are playing for a big club and you need to have it internationally. He is improving all the time in that aspect.”

Tierney is to Rodgers what David Alaba was to Pep Guardiola at Bayern Munich; he is multi-purpose, tactically intelligent and technically highly proficient.

For the time being, he is a left-back. But, in the long-term, those qualities should see him take up a more central role in defence or midfield.