He has already brought in four players on permanent deals this summer – Christian Atsu, Florian Lejeune, Jacob Murphy and Javier Manquillo – as he looks to build a squad ready of properly competing in the Premier League after promotion from the Championship.

And the latest name could be Arsenal left-back Kieran Gibbs, with the Newcastle Chronicle claiming the Magpies are interested in the 27-year-old.

Is Gibbs a realistic signing?

Normally, you would expect that a player who has been at a club that has been involved in Champions League football in every one of his professional seasons to date would not move to a newly-promoted Premier League side.

But Newcastle are not any newly-promoted side – their background, history and the sheer size of their support mean they are already an attractive option for many.

What’s more, they have a manager in Benítez who has a Champions League title and two La Liga wins behind him.

They have the potential to be a club plying their trade in Europe under the right guidance – and they will hope Benítez will bring that, he at least started in the right way by taking them back up after their relegation.

And what’s more, it looks like Gibbs is about to leave Arsenal after only starting eight Premier League games last season.

There is no place for him at the Emirates with the arrival of Sead Kolašinać, and he has been named in Arsenal’s Under-23 side tonight to face Boreham Wood, pretty much signalling the end of his first-team career.

With a player like Gibbs, someone with 10 England caps, and three FA Cup wins to his name, as well as regular Champions League experience, it’s no surprise that other clubs will be interested.

According to the Evening Standard, Stoke City are also interested, while the Daily Mail links him with Watford and Southampton, although it claims they are worried that Arsenal are overpricing him.

The Magpies won’t be facing off with West Bromwich Albion though.

“We have to look for players that fit what we want to do and the way we want to play.

“We have three or four other targets we are desperate for. We are juggling with two at the moment and that’s not Gibbs.”

How does Gibbs compare to Newcastle’s left-back options?

Ciaran Clark, Vurnon Anita, Jack Colback, Jesús Gámez and Achraf Lazaar also briefly featured in the role, but they were all fleeting appearances there, with Dummett the No.1 choice.

And you would assume Gibbs would be an upgrade on Dummett, given his higher profile – although the Newcastle man does have 66 Premier League experiences.

We have had a look at both of their statistics from last season, of course having to take into account that Gibbs was irregularly featuring for a team in the Premier League, while Dummett was a first-choice option at a second-division side.

If you’re looking for a more attacking left-back, the statistics imply that Gibbs is your man.

Perhaps unsurprisingly, given Gibbs’ increased attacking output, it is Dummett who is the busier in defence.

Increased defensive statistics don’t necessarily mean he is a better defender though, with tackles perhaps the cause of a mistake further up the pitch. 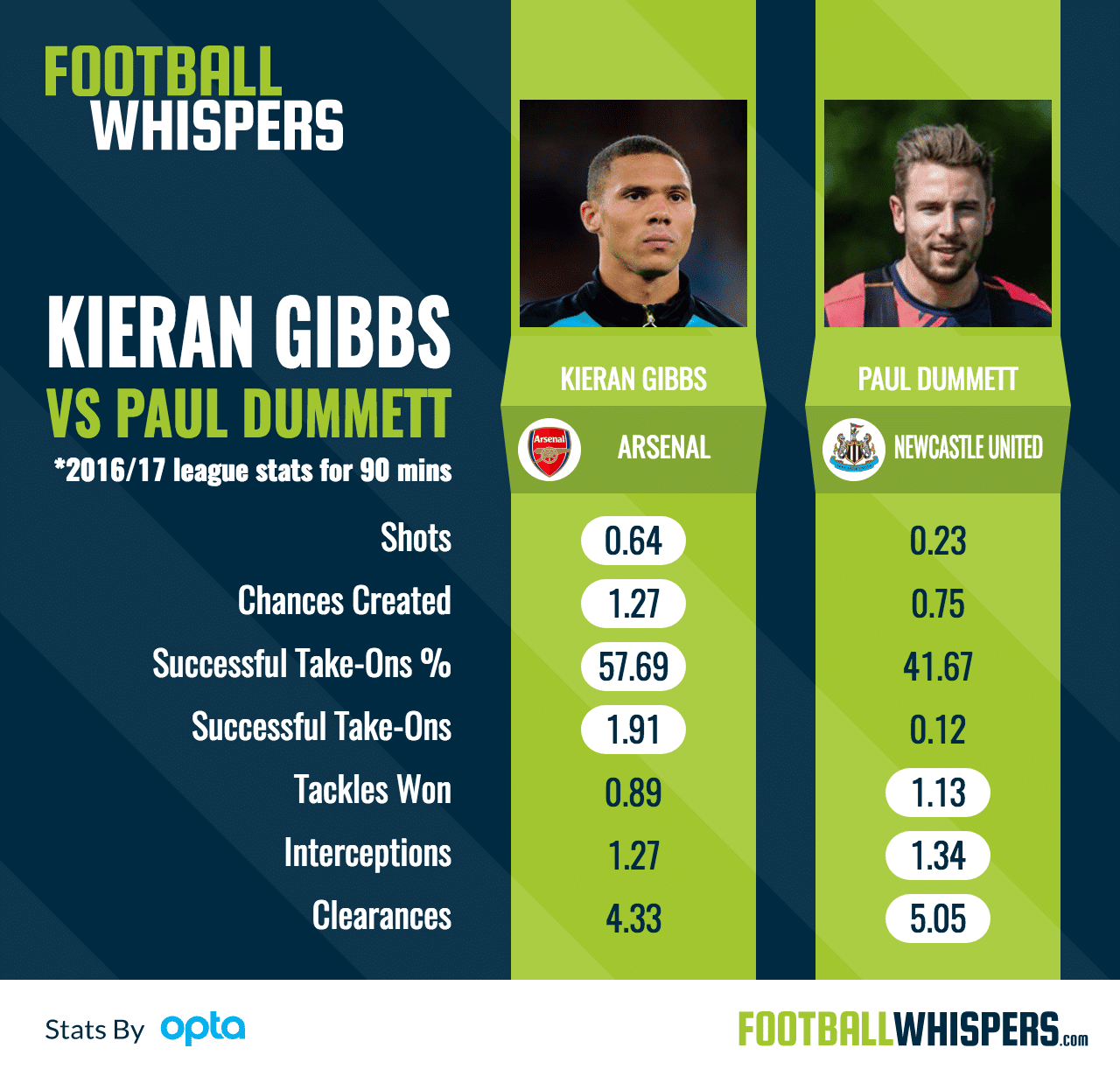 A statement of intent?

Signing Gibbs would show the other Premier League clubs that Newcastle are back for good.

He’s no Alex Sandro by any means, but he’s undoubtedly an option that most top-half Premier League sides would want in their squad, and that means he’s somewhat of a coup for the newly-promoted side.

Without him, Newcastle only have one real option in their squad at left-back too, whereas his arrival would mean they have two options who you would argue are top-flight level.

Competition is by no means a bad thing, and bringing in Gibbs could either see him usurp Dummett or make the current Magpies left-back up his game.