China’s quest for footballing success is well-known and has now been discussed for many years. However, despite an initial breakthrough in qualifying for the 2002 World Cup, very little has happened in the years since to suggest any major development has been made.

That a country of 1.4 billion cannot find 11 high level football players is a source of constant bemusement to many people worldwide. As a journalist covering the sport in China, it is the question you are most often asked—just when will China become a force in world football?

Logic suggests that China’s rise is surely inevitable and certainly recent investment in infrastructure, academies and school football programmes indicate that things are moving in the right direction.

However, the issues preventing China from moving to the upper echelons of world football are yet to be dealt with and will take some time to change in any meaningful way.

Footballing Culture and Attitudes to Sport

China is not a country where football culture is immediately visible in general life. But, it is a problem worsened by many of the country’s younger generations largely avoiding any activity which could cause harm.

With just one child per family in many cases, it has become commonplace for parents (and grandparents) across the country to prevent over-protected youngsters from participating in sport—especially if raining or smoggy.

As far as attempting to develop a national football team goes, it is a problematic situation.

In 2015, Mirzekim Rozi of the Xinjiang Education Institute told reporter Peter Davis of The Zuqiu Problem blog: “I think the one child policy does have an effect on football because Chinese students are pampered and football is a confrontational sport, kids get hurt and parents are afraid of their children’s participation.”

Now, though, there is little choice. Football has been rolled out as a compulsory participation sport in schools nationwide by central government, taking the decision out of the hands of parents.

The man now in charge of the country’s School Football Program is Tom Byer, a youth football expert with many years experience in neighbouring Japan in particular.

Byer recently told South China Morning Post: “The educators have viewed up until now sport and football in particular as a distraction – they’ve done their best to keep it out of schools.”

The American is now the man pushing for attitudes to be changed. Byer sees footballing development as a love affair between a player and a ball, starting from a very early age. Without the basic skills learned from early interactions with a ball, it is nigh on impossible to coach a player to an elite level at a later stage.

The truth is, for all that China’s football supporters are incredibly passionate, they are a noticeable minority within society. Outside of ‘football cities' where the sport has traditionally been more popular, football is not felt in daily life. The ‘love affair’ needed is a distant dream at the present time.

Quite simply, there are other priorities in life, while basketball remains a more popular participation sport with younger people. To really kick on, China has to develop a widespread football culture to rival the sport’s leading nations. 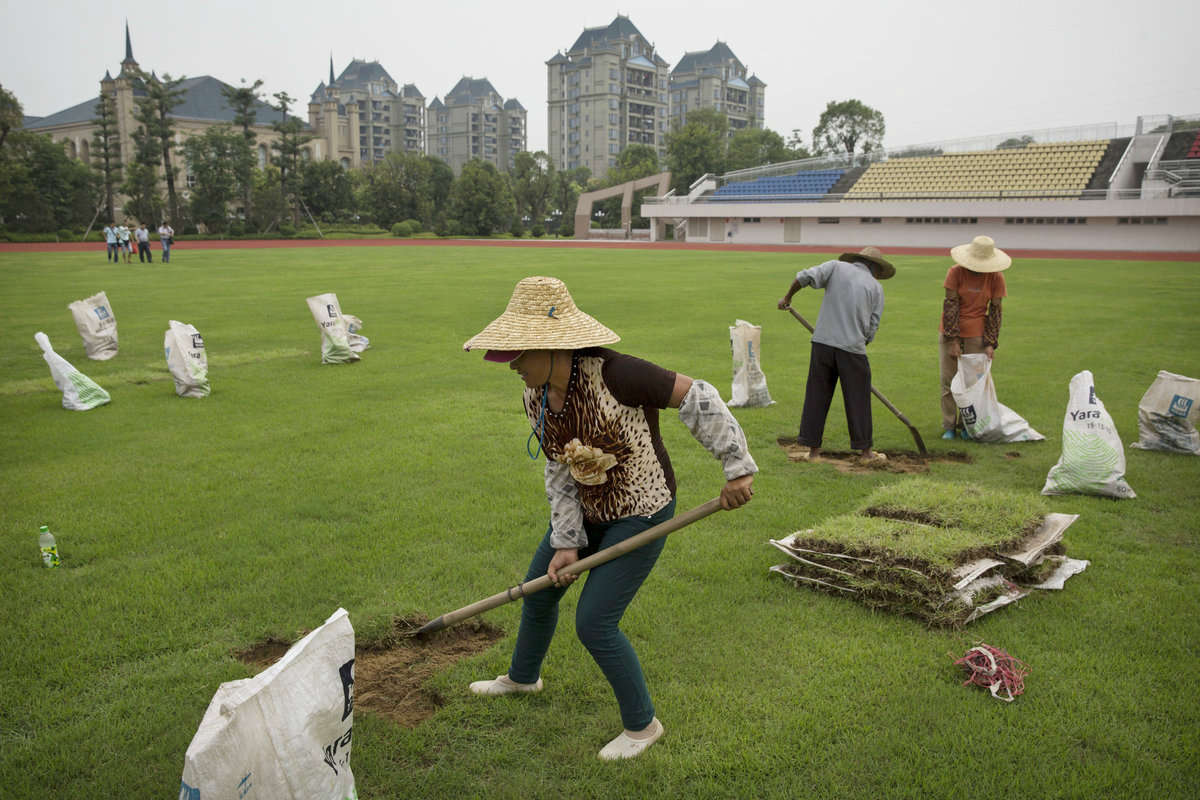 Chinese Super League games are regularly played on less than ideal surfaces. Few pitches are protected from winter frost, drainage is often a major issue and the use of stadia for mid-season concerts also presents a frequent point of concern.

At grassroots level, not only is there a shortage of available pitches (although this is being widely addressed), but the cost of renting a pitch is often prohibitive to young players being able to regularly go out and play with their friends.

To put the work that needs to be done into context: there are still teams in the professional system in China without their own fitness centre facilities, forcing players to use public gyms should they wish to do extra work. The end result is predictable.

Until recently, many clubs have been unsure of their financing from year to year and, indeed, have often been forced to move base or even city during off-seasons to secure sponsor or local government support.

Amid such an environment, long-term planning has not been a priority and expenditure has focused upon short-term fixes at first-team level. Club academies were, until recently, a real rarity.

Added to the fact that China’s three-tier national league system is not supported by local league systems, it is clear why there has been real issues developing talent.

There has been no pyramid of clubs supporting the top level, purely a system designed at picking off potentially elite players from sports-focused high schools.

While the country’s population may be large, China has worked with a system which greatly limits the number of players they can call upon.

Within the footballing ecosystem there are many issues preventing China from kicking on to become a leading football nation.

The game is controlled by regular edict from the Football Association, with new regulation and guidelines often imposed with little warning to the clubs.

The national team is not exempt from interference either, with regular suggestions of federation interference in technical matters. If not directly influencing decisions, there is always an inflated number of staff and officials surrounding the side when side when preparing for games.

“Chinese football is too complicated. It’s much simpler abroad. As a team, you need to be focused on-pitch matters,” defender Zhang Linpeng told a Hong Kong radio show in 2013.

“When you go to the national team camps, there is not much time together and you only have these few occasions each year. Yet, when you go the feeling isn’t great.

“We played an Asian Cup qualifier with Saudi Arabia and, on the day of the game, we had three hours of meetings. Nobody could quite understand why.

“From the officials to the coach, everyone wanted to speak. Some of it was about football, but some of it had no connection with football. After three hours, we needed to go and play. It was too unprofessional.”

An excess of bureaucracy undoubtedly has been a factor in China’s lack of footballing advancement and the recent ‘uncoupling’ of the football association from the government is not set to make much of an impact in that regard.

As the recent sudden changes to registration rules in the Chinese Super League show, government influence on football is still a daily part of life.

While so many non-footballing influences continue to have major input into the direction of the game it is difficult to see the light at the end of the tunnel.

An increasingly problematic issue which China must look to resolve is the lack of incentive for many of its players to improve themselves once they reach first-team level.

Chinese players in the top two divisions are now rewarded handsomely financially, earning salaries comparable with many of Europe’s top leagues. Indeed, European clubs looking to recruit Chinese players for marketing reasons have found they are unable to compete when it comes to salaries offered.

Over the past few years, Chinese talents have had opportunities to head to Europe but often in sponsor or agency-backed transfers. The two most high-profile cases saw attacking midfielder Zhang Xizhe join Wolfsburg and right-back Zhang Chengdong move to Rayo Vallecano.

However, both quickly returned home after difficult spells at clubs playing in top level competitions. Having been thrust on managers who would not otherwise have signed the player, they were on the back foot from the very start.

When leading light Wu Lei was given the opportunity to move to a league where he would realistically have been able to develop when FC Copenhagen made a substantial offer in 2013, the bid was rejected by Shanghai SIPG due to the status of the club. Only a top five league club would do.

For players it is a case of too much too soon, with a first-team contract now offering a life-changing amount of money. However, there is also little incentive to improve with no hope of continuing to a higher level of competition.

Similar arguments are often made about young English talent, but the situation is exaggerated yet further in China. Money is not always the answer.

The truth is that to properly analyse everything holding Chinese football back would require days to explain adequately. But there are several particularly obvious issues which much be resolved moving forward.

In time, with current resources continuing, China will succeed in its footballing ambitions but it will undoubtedly take longer than those in power would wish. Building infrastructure is simple, but there is no shortcut to building a football culture.\