January cannot have come soon enough for Diego Costa. The troublesome striker was heading back to Atlético Madrid, the club he'd wanted to re-join virtually since arriving at Chelsea three years prior. But for Kevin Gameiro, the Spaniard's arrival only increased the sense of inevitability that it would be him making way.

Luckily, the French forward is not short of suitors. Swansea City were among those chasing the 30-year-old but have ended their interest in the forward.

Newcastle United, Southampton and Crystal Palace – as desperate for a striker as Diego Costa was to re-join Atleti – are all on the hunt for a goal getter with the Magpies joining the race today, according to reports.

The Express claim Rafa Benítez is has made Gameiro his first-choice striking target this month with a permanent deal in the offing. Whether the notoriously frugal Mike Ashley will sanction a deal after seeing a takeover collapse is the big sticking point.

But if Newcastle can convince Gameiro to swap Madrid for Tyneside, what would they be getting? We've run the rule over the Atlético Madrid outcast.

“I'm a kid,” said Gameiro, referring to his 5ft 7ins frame. “So I have to be strong to fight defences.” That was before Sevilla‘s Europa League final win over Liverpool in Basel in 2016. He's been fighting ever since.

The 2015/16 season was the best of the forward's career. He plundered 28 goals in all competitions – including eight in just nine outings en-route to the final. That form earned the Senlis native his second crack with one of Europe's top sides, joining Atleti for a reported €32million (rising by a further €8million) in the summer of 2016.

Prior to that goal-laden spell in Andalusia – 67 strikes in 144 outings – Gameiro had tried his luck at Paris Saint-Germain – via Strasbourg and Lorient – and scored 23 times in 78 appearances for the Parisians in the pre-Qatari era.

With Guillaume Hoarau, Péguy Luyindula and Mateja Kežman as striking contemporaries, Gameiro managed 14 goals in all competitions during the 2010/11 season. But the following season Qatar Sports Investment (QSI) bought the club and everything changed at the Parc des Princes.

Gameiro was not immediately forced out by a spate of exotic arrivals – Zlatan Ibrahimović and Ezequiel Lavezzi came at the end of the first season of Qatari ownership – but the writing was on the wall and he was moved onto Sevilla for €10million.

The writing is on the wall once more.

What are Gameiro's main strengths?

A quick striker with good awareness, anticipation and reading of the game, Gameiro's excellent first touch means he can take the ball in tight areas, kill it in an instant and then motor away from defenders.

He is something of a poacher, sitting on the shoulder of the last defender, waiting to either break beyond or gobble up a chance made by those around him. In Diego Simeone‘s 4-4-2 system this season he has often played alongside Barcelona transfer target Antoine Griezmann.

Gameiro enjoys a fruitful partnership with his countryman who has supplied assists for three of his six goals this season, including the one below against Roma in the Champions League (below).

As soon as the ball is played to Griezmann (circled in blue), Gameiro (circled in green) is on the move. He positions himself between Roma's two centre-halves and neither pick him up. 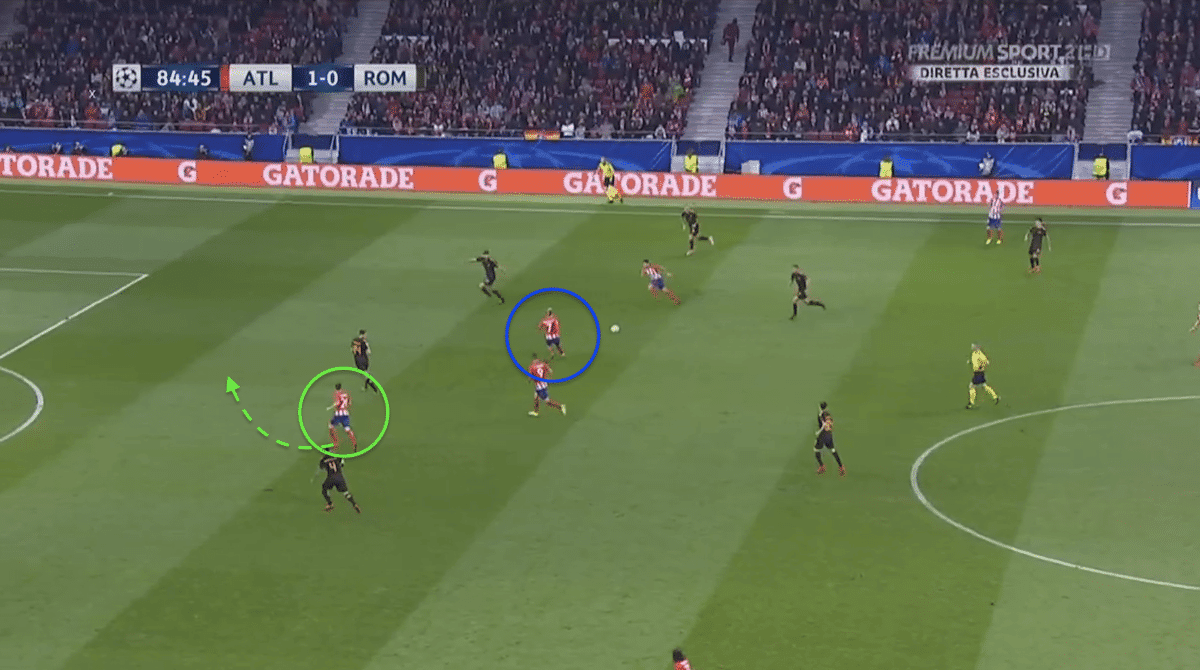 The ball from Griezmann is perfect, the kind of service Gameiro thrives on, and Kostas Manolas (44) cannot cut it out. Gameiro nips in, rounds Liverpool transfer target Alisson in the visitors' goal and cooly dispatches to give Atleti three vital points in the Champions League. 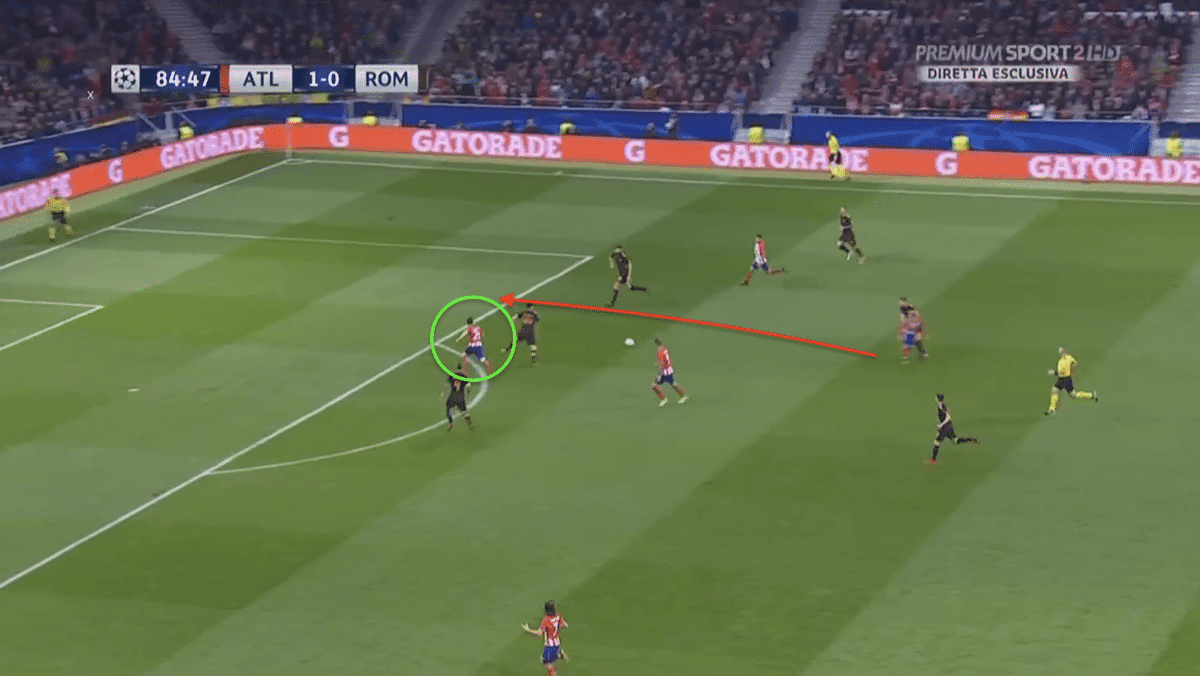 Half of Gameiro's four La Liga goals this season came in the 5-0 trouncing of Levante in November. The second outlined all his best traits perfectly. The move starts when Koke's pass into Gameiro flicks off the forward's heel into the path of Griezmann (red circle).

Atleti's No.7 could easily shift the ball to the left where Ángel Correa has gaping hole to drive into. Instead he spots his countryman through the middle and slips a perfectly-weighted pass in behind Levante's defence where Gameiro, having held his run immaculately, slots past Oier. 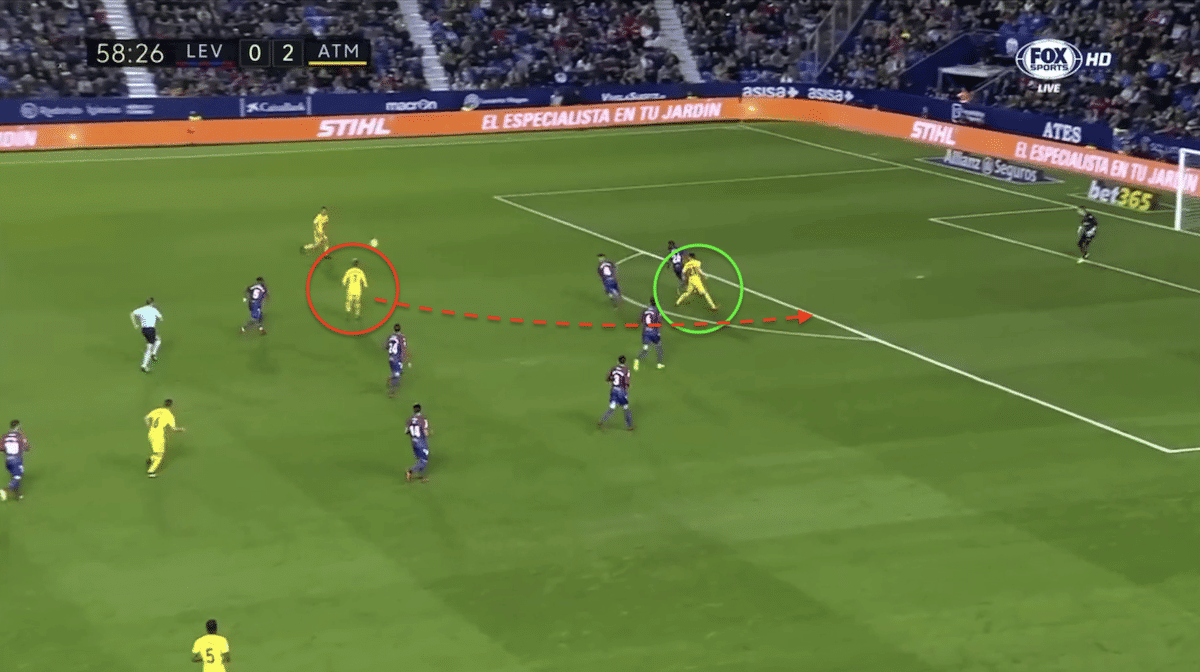 Gameiro and Griezmann both got two at the Ciutat de València with the Crystal Palace transfer target repaying his team-mates five minutes later by setting up the visitors' fourth goal.

What are Gameiro's main weaknesses?

Perhaps Gameiro's biggest weakness is responsible for his failure to assert himself on Simeone's Atlético side: he isn't physical enough. While he is quick, he is not strong, aggressive or good in the air.

All of that is pretty unsurprising given his slight frame. For that reason alone he was always a slightly strange purchase, given the attritional style of play favoured by El Cholo. It's little wonder Atlético have, therefore, just brought Diego Costa back to inject some tenacity into the forward line. 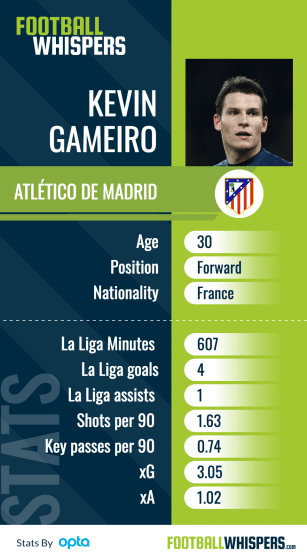 How much would Gameiro cost?

According to The Sun last Friday, Atleti would like to sell the striker for a fee in excess of the £25million that Swansea offered earlier this month. That is an asking price which could be problematic for the Premier League's interested parties.

Newcastle owner Ashley, having seen a £250million takeover collapse, is not likely to hand Benítez that kind of money – especially to sign a 30-year-old. The Magpies' need is greater than most as they are dependent on the less-than-prolific Joselu for goals. But Ashley will want a cheaper alternative.

For a back-up option Tottenham are unlikely to be willing to spend such a fee, which is why Spurs favour a six-month loan deal which would suit them but arguably not the player or Atlético.

At 30 Gameiro's next move is likely to be his last mega-money deal. He will want to maximise the final big contract of his career as he will never be sold for this much again and he will surely look to exploit that.

So while Tottenham and Newcastle are keen, they would face a fight to convince Gameiro. The tables have turned it seems for the Frenchman.