Wolves are quietly going about piecing together a squad capable of competing for a top-six position. Unlike rivals Everton and Leicester City, Nuno Espírito Santo and the recruitment team at Molineux haven't spent exorbitant fees to boost their squad.

Raúl Jiménez turned his loan move into a permanent one for around the £35million mark, the norm for Premier League clubs these days.

They've raided Serie A to add Patrick Cutrone, Jesús Vallejo, Pedro Neto and Bruno Jordão to their pool of players and this love affair with the Italian top-flight looks to continue with Wolves reportedly eager to sign Franck Kessié.

Links to the Milan midfielder emerged after the Midlands club failed to strike a deal with Southampton to bring Mario Lemina in on loan. It's clear Espírito Santo wanted to bulk up his middle third options and Kessié does that and then some.

The Ivory Coast international is an upgrade on Lemina and for £23million, he's potentially one of the bargains of the summer.

Milan are prepared to sell the 22-year-old and this comes as a surprise to many. It wasn't long ago that the former Atalanta man was one of the most in-demand players in world football. But Marco Giampaolo's appointment has coincided with a midfield reshuffle and the Rossoneri are no longer as reliant on their midfield powerhouse.

Wolves are the only club seemingly looking to capitalise on this. Kessié could be the perfect foil for Rúben Neves and João Moutinho in the middle third. Often mistaken for a destroyer, the Milan man is much more than that. 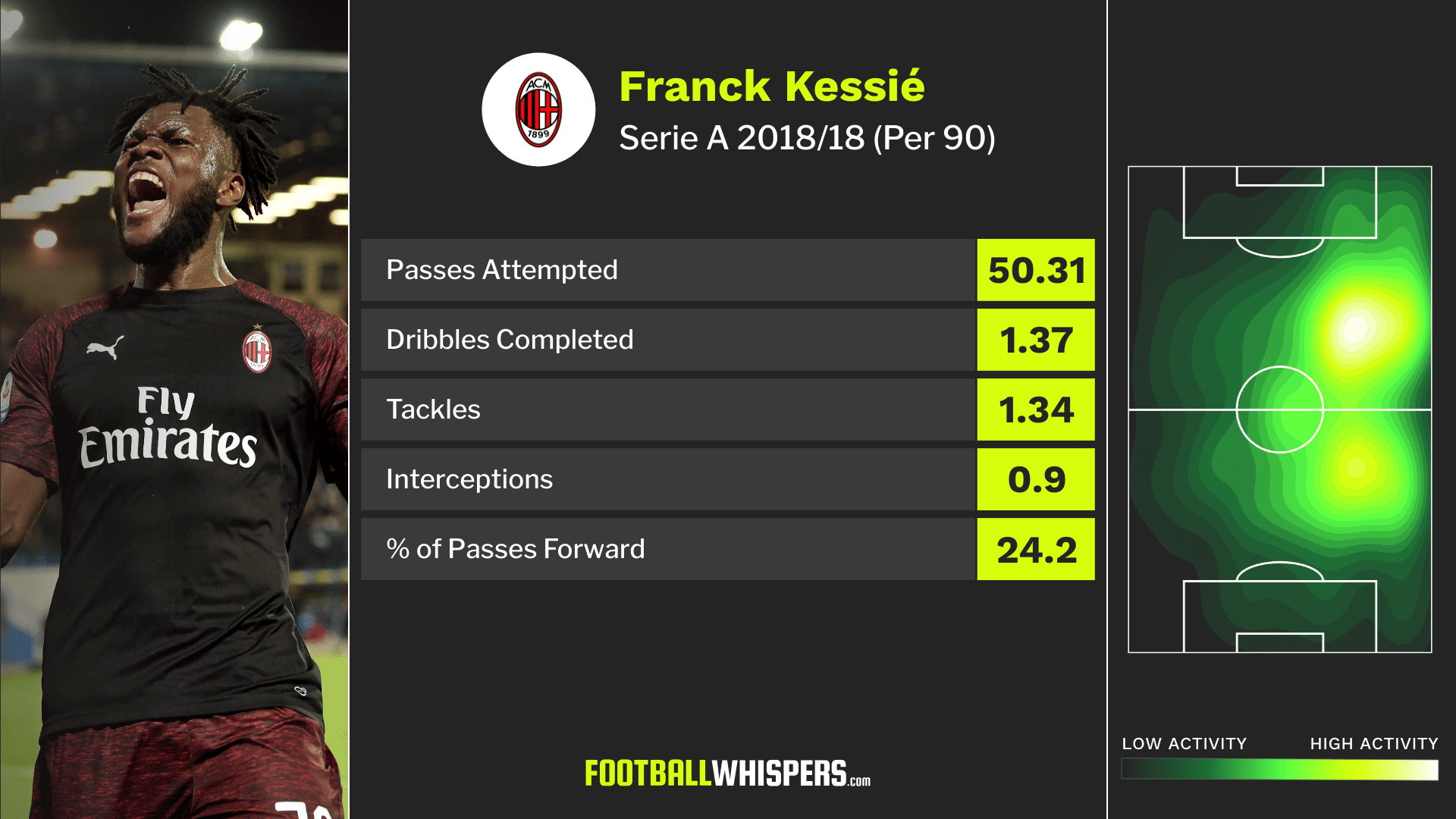 He has been directly involved in 17 goals (12 goals, five assists) during that period and has established himself as one of Serie A’s most accomplished ball-winners, having won possession 213 times throughout 2018/19 (more than any other Milan player).

His contributions extend far beyond goalscoring, though. An engine in midfield, Kessié covers a lot of ground, both in an attempt to break up the opponent’s play and join Milan’s attacks. His speed and aggression make him an effective presser, often charging towards the opponent after a pass from full-back into the centre.

Indeed, he is often the one mopping up midfield battles and sliding into 50:50 challenges. While he can sometimes be rash, his record of 28 tackles won from 45 attempted suggests he is, more often than not, an effective ball-winner.

The 22-year-old is heavily involved at the San Siro, attempting, on average, 50 passes per 90 with close to a quarter of those going forward. He's not as expressive as Neves or Moutinho but he doesn't have to be.

He is, however, press-resistant, an important trait to all modern-day midfielders. Kessié completes 1.37 dribbles per 90, often powering into space and getting clear of the opposition.

The 34-cap Ivory Coast international appears to be ideal for the Premier League. He could be another shrewd addition to this talented Wolves squad. If the deal gets done, he's comfortably the best signing Santo's men will have made this summer.