There's a potential Hollywood movie ending on the cards of Kerem Demirbay. The Hoffenheim midfielder is ruled out for the foreseeable future after scans revealed that the 24-year-old had ruptured the anterior ligament and partially torn the ligament in his right ankle during a recent match with Hertha Berlin.

But there's every chance he returns to the starting XI to help fire Hoffenheim into the Europa League before making a big money move to the Premier League. He'd leave a hero.

The former Borussia Dortmund youth academy player has the potential to be a game changer and a match winner. He could be the potential difference maker Julian Nagelsmann's men need when just the seven points separate nine teams in the Bundesliga.

Recent reports in Sport Bild have linked the versatile playmaker with a move to England and he's believed to be an Arsenal, Everton and Liverpool transfer target.

His contract, which expires in 2021, has a £28million release clause in it – a drop in the ocean for Premier League clubs.

He's represented by Arena11 meaning a switch to Liverpool looks more likely of the two. The same agency manage the affairs of Sadio Mané and Naby Keïta.

German publication Bild published quotes suggesting he wouldn't be against a move to one of Europe's elite:”Honestly, it would not be uninteresting. My advisors and the club should make that up among themselves.”

Who is Kerem Demirbay?

The 24-year-old's rise to prominence isn't a traditional one. He started out with Schalke 04 but after eight years with the club he moved to rivals Dortmund in 2007. He then spent time with the SG Wattenscheid 09. youth academy before returning to Dortmund – Jürgen Klopp was the manager at the time.

He made his debut for the club's second team in 2012 but after 18 months left for Hamburg on a free transfer. He got his first start for the senior team in April 2014.

Demirbay spent the 2014/15 season on loan with 1. FC Kaiserslautern and then joined Fortuna Dusseldorf for the 2015/16 season. It was his spell with the latter that really caught the attention of a number of clubs as he scored ten goals in 25 appearances as an attacking midfielder.

Hoffenhaim, with new boss Nagelsmann at the helm, signed him in the summer of 2016 for around the £1.5million mark. The move didn't make waves in the Bundesliga but by the end of the season, plenty of clubs were kicking themselves for not spotting his potential at a bargain fee.

At Hoffenheim Demirbay was deployed as a box-to-box midfielder in a 3-5-2 system as detailed in the club profile. It's similar to how Pep Guardiola uses David Silva and Kevin de Bruyne in a deeper role. Nagelsmann realised Demirbay had the ability to beat players in the middle third and influence the game as a creative force.

He wasn't shackled by defensive duties and could express himself. And he did just that. Although that's not to say Demirbay shirked his responsibilities – he averaged 3.6 tackles and interceptions per 90 last season and 3.2 this time around.

With top teams in England becoming more dominant they're now deploying attacking midfielders in centre-midfield roles. Liverpool have done it with Adam Lallana and Philippe Coutinho while Arsenal gave Mesut Özil a go in the middle third.

It allows managers to field more attack minded players in their starting XI and increases their chances of breaking those low block teams down. 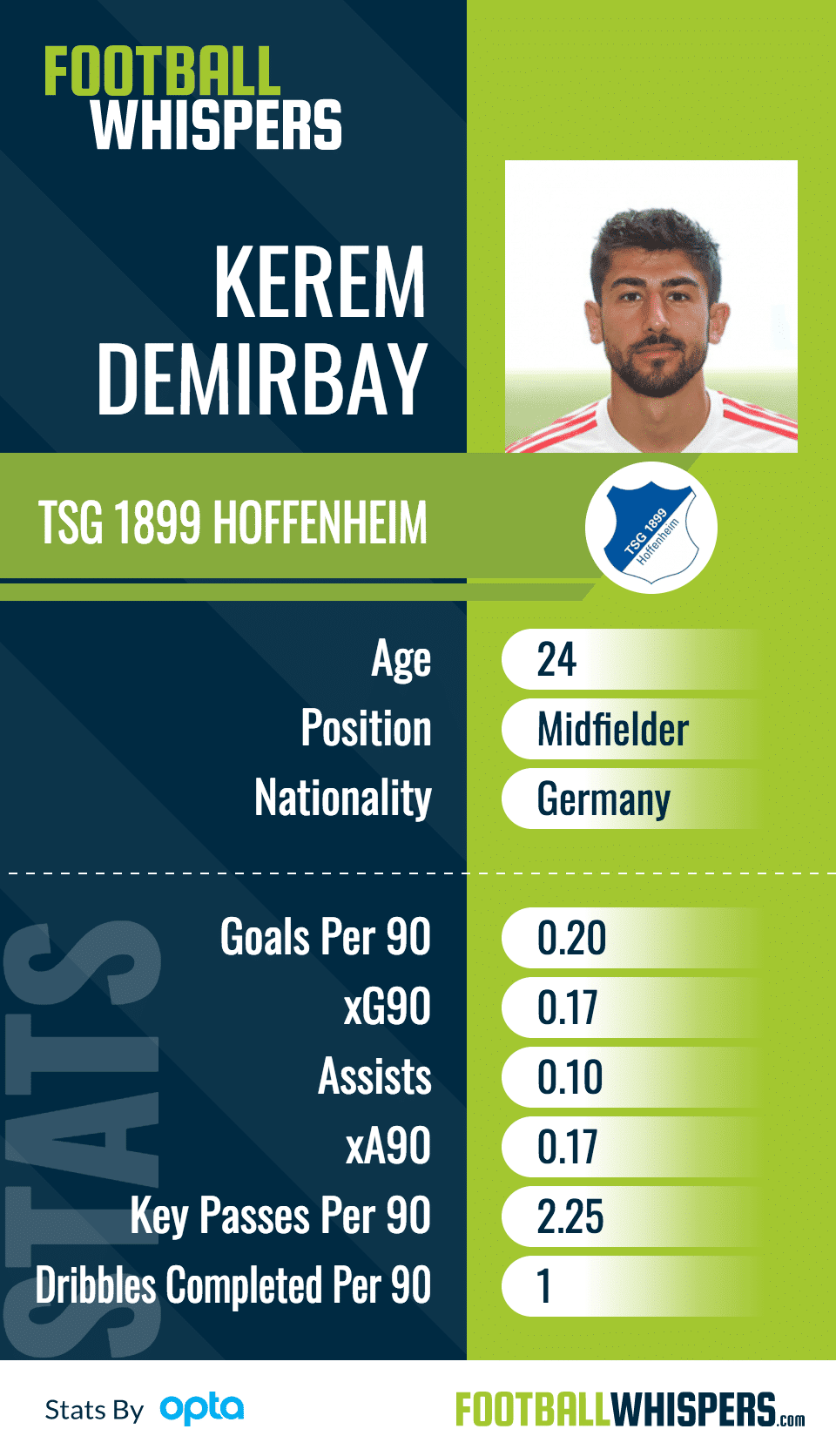 In the graphic above you see Demirbay's stats for the season. Aside from the key passes per 90, not much stands out. But like with all stats, context is necessary to fully appreciate them.

He's not been able to replicate last season's form but that's not all down to him. Hoffenheim are in transition; they lost Seb Rudy and Niklas Süle – two mainstays of their defensive unit last season – to Bayern Munich while there's been uncertainty surrounding the futures of Nagelsmann and Sandro Wagner, the focal point of the attack.

Wagner left to join Bayern Munich during the winter window and Nagelsmann continues to to be linked with a summer move to Dortmund. Combine all of that with injuries in September, October and January and it's easy to understand why Demirbay is yet to find his rhythm again.

Think of everything de Bruyne does for Man City and you have what Demirbay does for Hoffenheim. He's a creator from all parts of the pitch and a driving force when in possession. The 24-year-old knows how to take players out of the game and can break defensive lines with passes as well as by dribbling past opponents.

Demirbay has mastered the art of ball manipulation. He's deadly from set pieces but it's what he does in open play that makes him different. It's not often you come across a player who can pull the strings with either foot. If he's the one to set the tempo for the team then he's hard to stop. 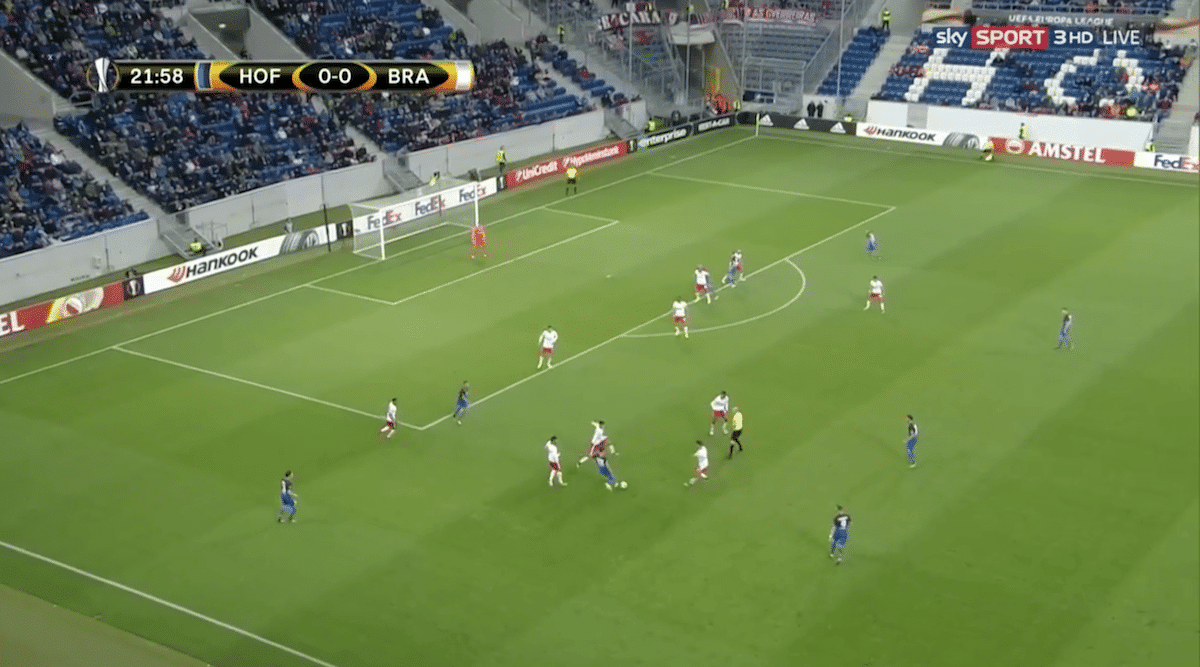 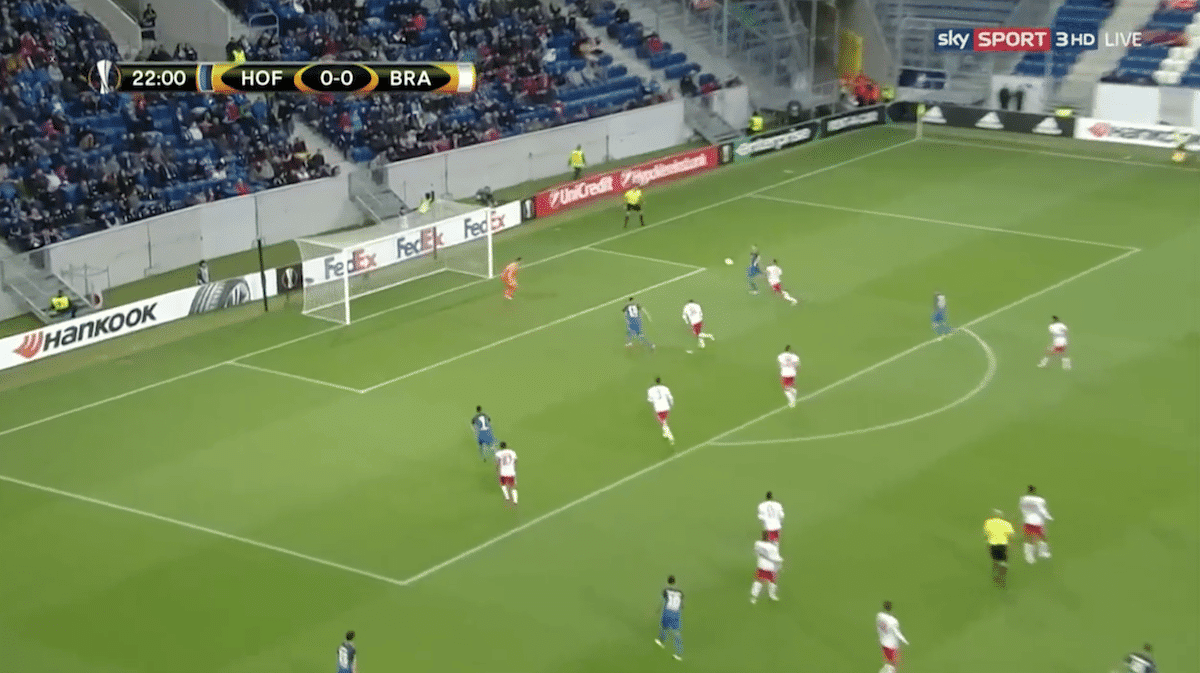 In the above two pictures you see Demirbay in possession. He spots that Hoffenheim have an overload on their right hand side and looks to work the ball out there. He has four men around him and he's on his weaker foot, but he's still able to delicately float a ball over the top.

As he lines up to play the pass Braga must feel confident even though the home side have a spare man on the right. They have nine players behind the ball and the only dangerous pass he could make is the one he executes perfectly.

How often do you see a pass like that attempted but it's either under or overhit? He makes it look effortless but it's far from easy.

So how much of a weapon would Demirbay be in a team with inside forwards who look to make runs outside to in? 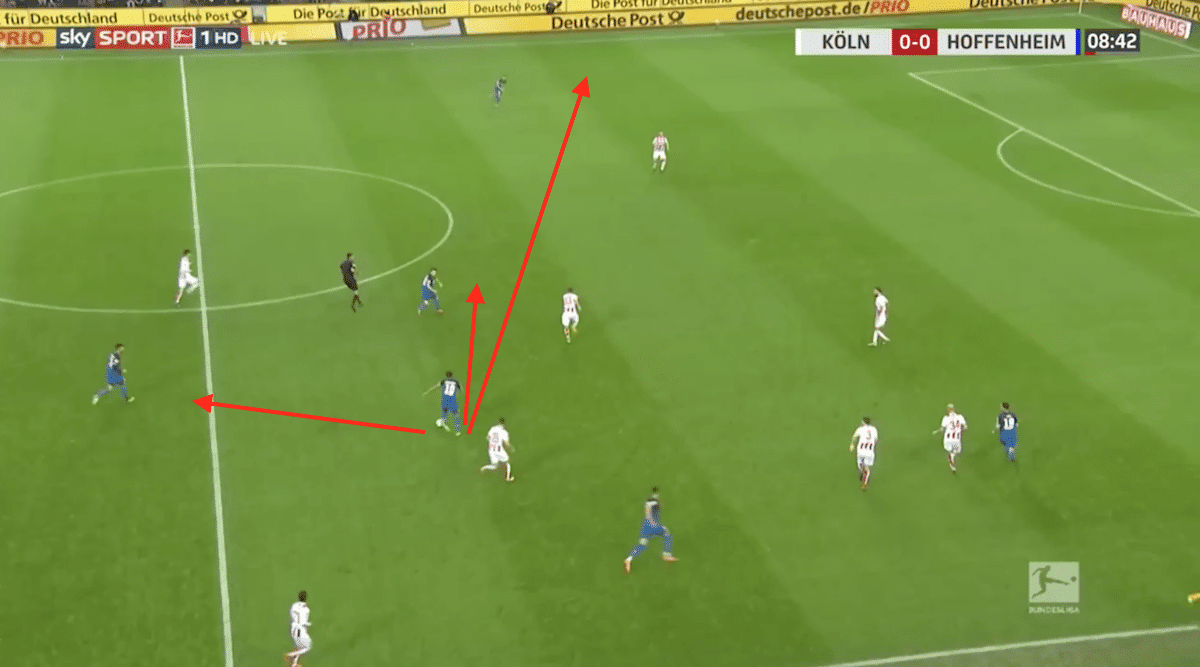 As previously mentioned, his dribbling ability is another strength. Last season he was completing 2.2 dribbles per 90 minutes and he was often the instigator of attacks for Hoffenheim. In the picture above you see Demirbay in possession and he has three passing options, highlighted by the red arrows, on.

The ball to the man out wide might be seen as progressive – he'd be isolated against the defender and could beat him – but it's not an easy one to execute.

Instead the Hoffenheim No.10 drives forward and engages the opposition. 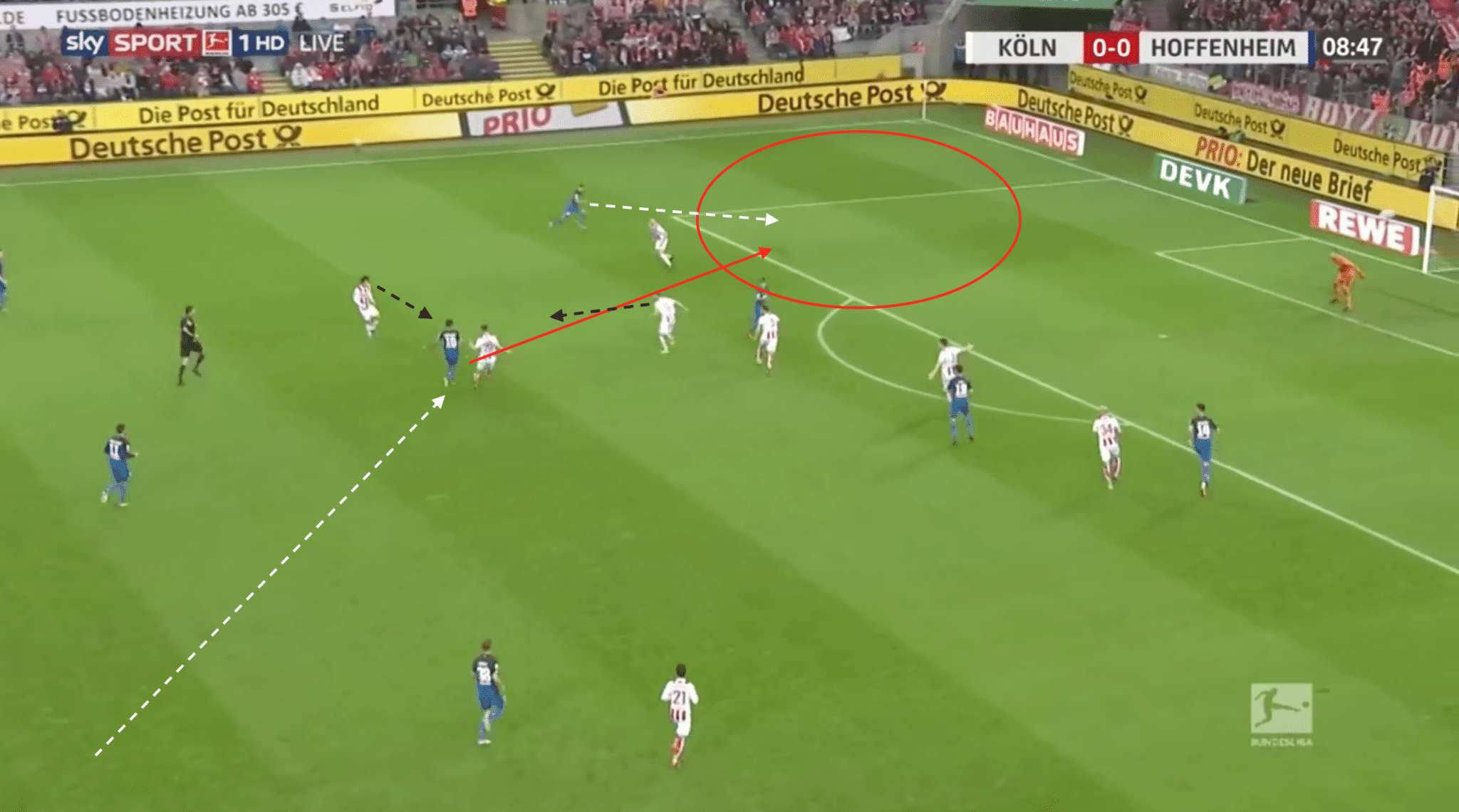 He carries the ball from right to left and only plays a pass when he's 30 yards away from goal. But look at the FC Koln defence as he's lining up the pass. One of them is chasing Demirbay and another two are looking at him.

He plays an incisive ball on the inside of the right-back and into the space for his teammate to attack.

Then it's three vs three in the middle and the man in possession has plenty of options.

By ignoring the big switch earlier on in the attack Demirbay orchestrates it so Hoffenheim have a greater chance of scoring. It shows that he is an intelligent player who, with better players around him, would be even more of a threat.

Would a move make sense?

The only issue would be playing time. He's a starter for Hoffenheim and he would be for a host of other clubs. Can he get the same assurances at Arsenal or Liverpool? Probably not. Even at Everton there would be no guarantees.

But the £28million  being touted would be a bargain fee for Demirbay. He's got all of the right tools to be an attacking weapon in the Premier League for one of the top teams.

The physicality of the English top flight shouldn't be a problem for him after he played as part of one of the most organised, all-action teams in the Bundesliga last season.

He has the potential to be one of the shrewdest signings of the summer. With Leon Goretzka's move to Bayern Munich confirmed, Demirbay may now be the Bundesliga's most wanted.