The Bundesliga has proven fertile ground for Arsenal in recent transfer windows.

And while former head of recruitment Sven Mislintat may have exited stage left, the Gunners are, according to BILD, targeting their next Bundesliga bargain.

The German newspaper claims the north Londoners have expressed an interest in Hoffenheim midfielder Kerem Demirbay. The 25-year-old reportedly has an appealingly low release clause of between €20-30million and has also attracted batting eyelids from Turkish duo Beşiktaş and Galatasaray.

At this stage, it'd be a bit weird if you didn't know that, this summer, Arsenal will be shopping for players who can fill the void (and it will be a void) when Aaron Ramsey joins Juventus.

Demirbay isn't Ramsey but he is a highly effective, forward-thinking central midfielder.

A two-time Germany international, he joined Hoffenheim from Hamburg in 2016 and made a considerable impact during Julian Nagelsmann's first full season in charge, scoring six goals and notching eight assists as Die Kraichgauer secured a top-four finish.

Something of a nomad during his early years – including his youth career and loans, Hoffenheim are his seventh club – Demirbay found a new home in Baden-Württemberg.

He performed a demanding role in Nagelsmann's 3-5-2, helping to break defences down as well as effectively becoming a ball-winning No.6 when Hoffenheim didn't have possession.

Mostly protected by anchorman Sebastian Rudy, though, Demirbay was free to blossom creatively. During the 2016/17 season, he created 12 big chances, or 0.49 per 90 minutes, and managed 35 shot assists in open play. His overall open-play xContribution (expected goals assisted + expected goals) of 8.03 was enough to rank him in the top ten for Bundesliga midfielders. 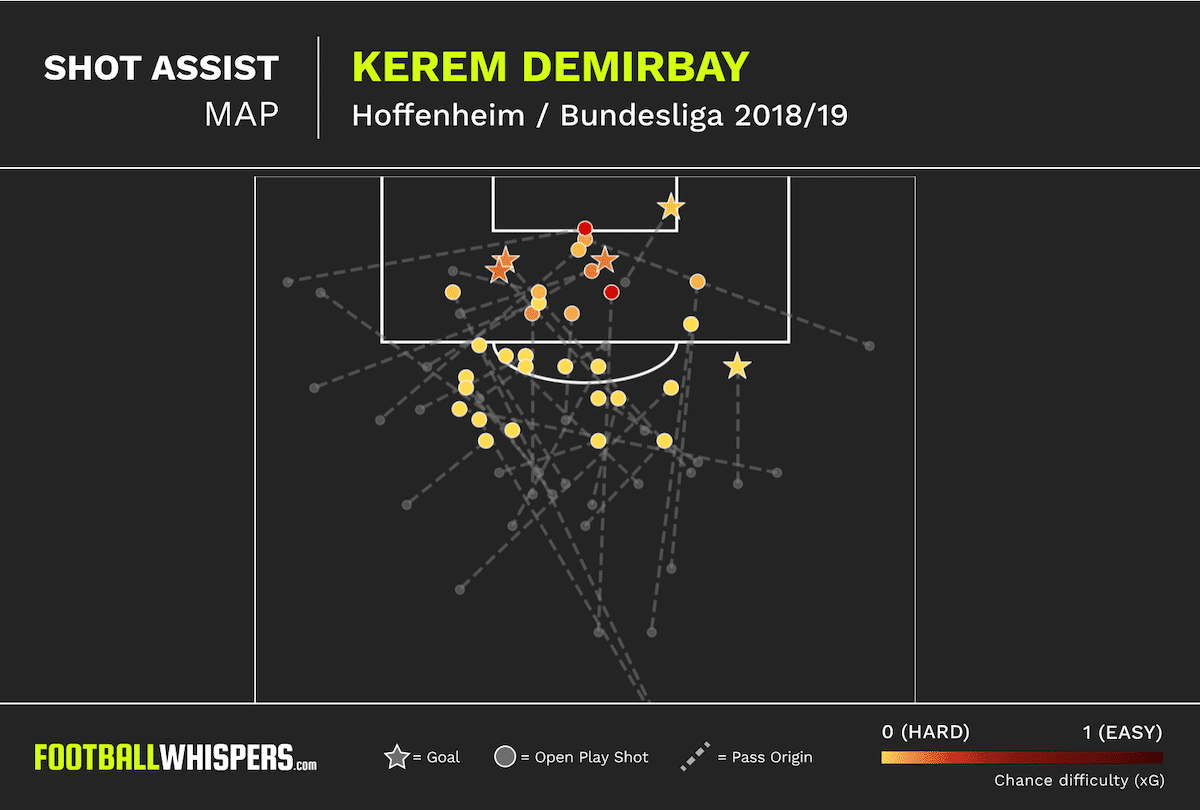 His second year at Hoffenheim was interrupted by injury, which perhaps explains why Liverpool's interest in him cooled. However, despite Hoffenheim's somewhat underwhelming campaign (they're set to miss out on the top four), he has re-emerged as reasonably hot property on the transfer market.

This year – Nagelsmann's last as Hoffenheim boss – Demirbay has been deployed in a variety of midfield roles. Often paired with Florian Grillitsch, he has sometimes been unleashed in a more advanced role.

Although not a traditional No.10, he is adept at finding space and unlocking defences. An educated passer, the former Turkey underage international has attempted more through balls than any other midfielder in Germany this season.

Confident in his abilities, he has also attempted more shots from outside the box (39) than anyone else, scoring twice from distance.

Although he loves a shot, one of Demirbay's best attributes is his delivery from wide areas. Nagelsmann's system often allows the midfielder to find space on the wings, from where he has produced four assists this term.

It's no surprise, then, given the pace and whip he generates with his delivery, that he has managed more shot assists from set pieces (30) than anyone else this season. 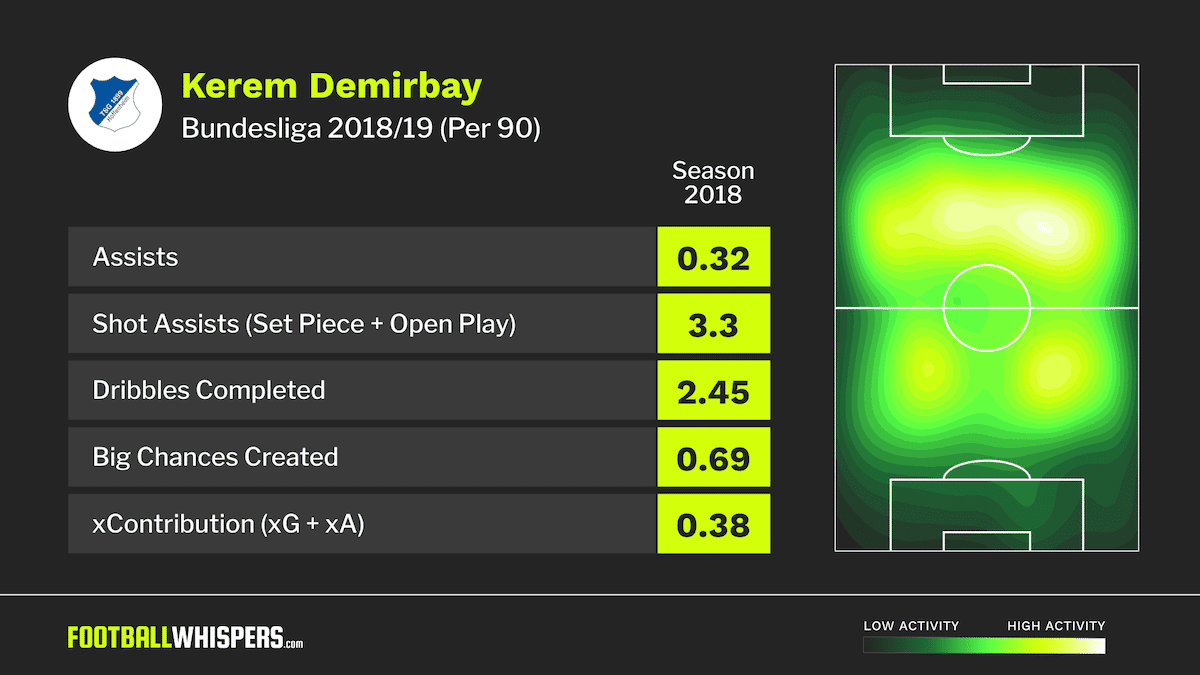 Demirbay is not some fanciful ‘Manchester City are set to sign Lionel Messi for £500million' rumour; there appears to be genuine substance to it.

Mislintat possibly laid the foundations before his departure in February, and it seems as though the Gunners have stepped up their interest, perhaps accelerated by the player notching assists in his two most recent outings.

Emery ideally wants to add high energy, hard-working midfielders in the Lucas Torreira mould. Demirbay, who covers a lot of ground, can spot a defence-splitting pass and is capable of gritty defensive shifts, ticks a lot of boxes.

There are also a couple of tidbits which may give Arsenal leverage. Demirbay is under contract until 2022 but, with Nagelsmann set to join RB Leipzig, the futures of several Hoffenheim players have been plunged into doubt. Nico Schulz seems destined for Borussia Dortmund while there has been interest in Andrej Kramarić.

If the Gunners are to make a move, this summer seems like the right time. They also sent Reiss Nelson on loan to Hoffenheim last summer so have the advantage of having conducted recent business with the Bundesliga side.

As an affordable, talented and versatile midfielder still with his peak years ahead of him, Demirbay could potentially be another excellent Bundesliga import at the Emirates Stadium.