Maurizio Sarri famously isn't fussed about the transfer window. When he was unveiled as Antonio Conte's successor at Chelsea, he admitted to being ‘bored' by it.

In a footballing world that increasingly sees managers wrestling for complete control when it comes to transfers, Sarri's indifference is refreshing.

However, even he will have been excited by the latest developments at Stamford Bridge as Chelsea look set to complete deals for Athletic Bilbao's Kepa Arrizabalaga and wantaway Real Madrid midfielder Mateo Kovačić.

It's a frantic and exciting denouement to this summer's curtailed transfer window for Chelsea fans.

Thibaut Courtois may be on his way out – with the Belgian finally set to seal his dream move to Real Madrid – but the club have moved decisively to cushion the blow of his departure with the arrival of one of the world's most promising young goalkeepers.

On top of that, the Blues may significantly strengthen their midfield with Kovačić, a player who, at 24, still has the time to become one of the finest in his position.

Should Chelsea land Nabil Fekir, too, suddenly the landscape will be looking a whole lot rosier ahead of Saturday's opening Premier League fixture away to Huddersfield Town.

Kepa the keeper to replace Courtois

Courtois' potential departure has loomed over Chelsea throughout the summer. The 26-year-old has been a remarkably consistent presence between the sticks for the Blues over the past four seasons but the blow felt by his imminent exit will be more than cushioned by Kepa's arrival.

The 23-year-old's £71million fee is eye-watering. In fact, it's a world record for a goalkeeper, eclipsing the £66.9million Liverpool paid Roma for Alisson.

However, the reason for the Blues parting with such a substantial sum is simple: Kepa is fast becoming one of the world's finest stoppers. Considering his age and ability level, the Basque keeper can become a stalwart in this Chelsea team.

He made a considerable impression as he rose through the club's youth ranks before eventually making his La Liga debut in September 2016. After just a handful of first-team appearances, it became clear that the club had a rising star on its hands.

Kepa cemented his place as the first-choice at San Mamés and it wasn't long before he was heavily linked to Real Madrid. In January, having already passed a medical, Kepa's proposed move to Los Blancos fell through when Zinedine Zidane vetoed the transfer, with the Frenchman not interested in signing a new goalkeeper halfway through the season.

Madrid were set to sign Kepa for £18m and, just seven months later, he arrives at Chelsea with his value having increased by 300 per cent.

However, Kepa is a terrific modern goalkeeper, one who offers impressive physical and mental attributes. His relatively tender age may mean a period of adjustment is forthcoming but luckily Sarri has Willy Caballero and Rob Green, two goalkeepers of immense experience, to call upon while Kepa gets acclimatised to life in England.

Once he settles in, though, expect plenty of comparisons to David De Gea. Kepa's stats for the 2017/18 season certainly reflect his abilities. He saved two out of the three penalties he faced and averaged 14.2 launched balls per 90, placing him third in that category.

That second statistic is a telling one. Kepa has forged a reputation as one of Spanish football's most astute distributors, with an accuracy of 67 per cent from an average length of 43 metres.

Crucially for a modern goalkeeper, Kepa is adept with the ball at his feet, like Manchester City's Ederson for example. Sarri monitored the youngster's progress while he was in charge of Napoli as a potential replacement for Pepe Reina.

In fact, according to reports in the Spanish press, the former Liverpool stopper encouraged Sarri to sign Kepa and played a part in the goalkeeper's decision to move.

What Chelsea are getting is the complete package; a young goalkeeper whose maturity and composure belies his age and a fine shot-stopper with sharp distribution skills. He is expensive, for sure, but not unlike De Gea, in time he will grow to become one of the Premier League's most reliable goalkeepers.

If Chelsea fans find it difficult to get excited over a goalkeeper, Kovačić's mooted arrival should do the trick.

The Croatian, whose desire to leave Real Madrid in search of regular starting football is well-established, is expected to arrive at Chelsea on loan as part of the deal that will see Courtois sign for the Champions League winners.

It's an excellent piece of business. Although Kovačić has not managed to fully cement his place in the starting line-up at the Bernabéu, he remains a supremely talented midfielder. It appears that Sarri is a fan of the 24-year-old and, over time, the coach's teaching may well bring out the best in the former Inter Milan man.

Kovačić essentially completes Sarri's midfield puzzle. In bringing Jorginho with him from Napoli, the coach retained the services of one of his favourite players, a deep-lying metronome to work in tandem with N'Golo Kanté in Chelsea's engine room.

Of course, Sarri's high-pressing 4-3-3 required the third cog in midfield. Cesc Fàbregas is now 31 and, while the Spaniard still offers craft through the centre of the park, he cannot satisfy Sarri's desire for a hard-pressing robust presence at the head of the midfield. Ross Barkley, meanwhile, has done little to suggest that he can fulfill such a role on a weekly basis.

Kovačić can perform the ‘Marek Hamšík' role in Sarri's Chelsea. For Napoli, the mohawked Slovakian playmaker slotted in behind the front three and that's precisely where Sarri will deploy Kovačić. Having the Croatian ahead of Jorginho and Kanté and behind an attacking trident of Álvaro Morata, Eden Hazard and Willian certainly has the potential to be devastating.

But Kovačić is not Hamšík. Whereas the Napoli captain is renowned for his inventive passing and goalscoring prowess, Kovačić is more of a dynamic, enterprising presence. Last season in La Liga, Adnan Januzaj was the only midfielder to complete more take-ons per 90.

Yes, Kovačić relishes taking opponents on but he is still a fine passer of the ball, one who can break the lines with a show-stopping through ball, like the one illustrated in the screenshots below, in which he found Marco Asensio with a defence-slicing pass on the counter. 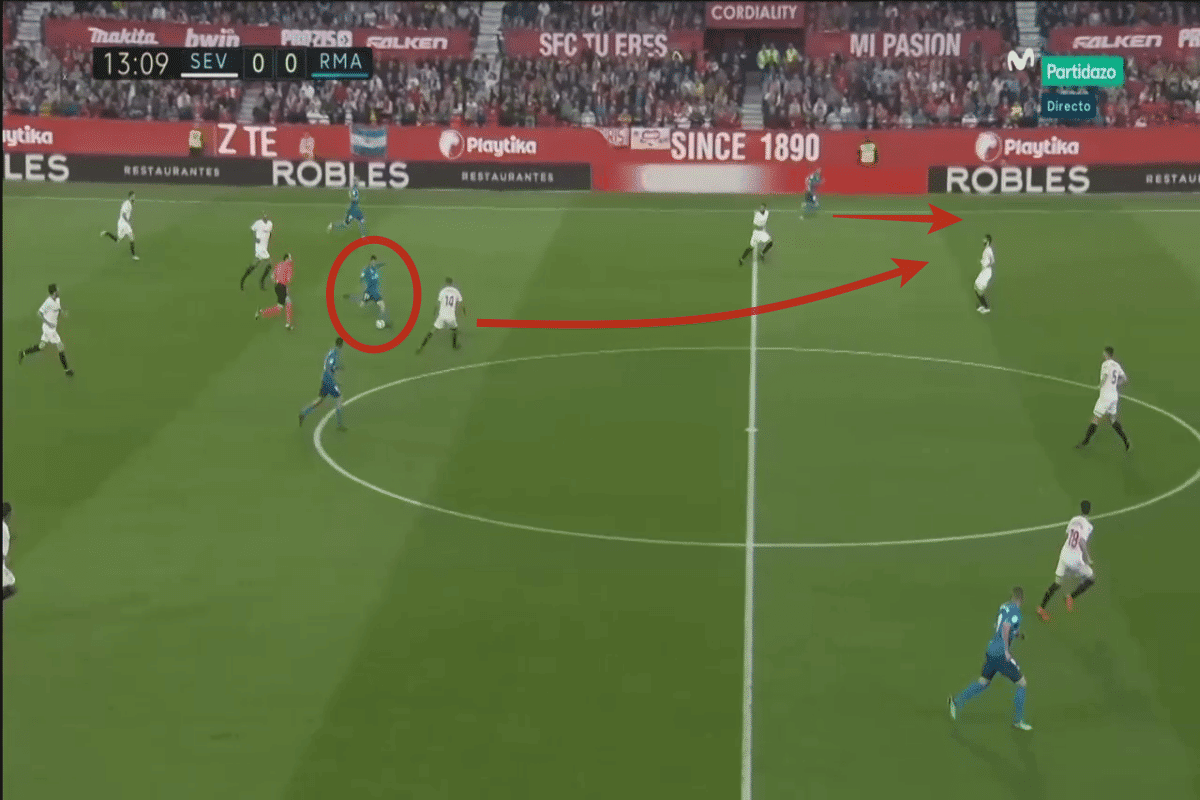 Chelsea will expect much better than the three goals in 109 appearances he managed for Real but eight goals in his final season at Inter suggests a healthy scoring output is not beyond his capabilities.

Chelsea's summer may have started inauspiciously. However, having rid themselves of Conte – who by all accounts had completely lost the dressing room – things have panned out as well as they could have hoped. Sarri has arrived and they have signed three excellent players while keeping Eden Hazard. It adds up to a satisfactory summer for the Blues.

Now, with Kepa and Kovačić in tow, they're ready to play Sarri-ball and extinguish the memory of Conte's second season in charge.