It was inevitable that it was going to happen. Goalkeeper transfer fees were always going to catch up with the rest of the market. But it's fair to say very few envisaged the transfer record for a shot-stopper doubling inside the space of 12 months.

And Kepa Arrizabalaga‘s move to Chelsea has done just that.

The 2016/17 Premier League champions parted with £71million to sign the Spain international. It makes the £35million Manchester City spent on Ederson last summer look like a bargain and means Alisson's tag as the world's most expensive goalkeeper lasted just three weeks following his move from Roma to Liverpool.

Even so the £66million fee will weigh heavy on the Brazilian's broad shoulders this season, and it will mean both Alisson and Kepa will be under intense scrutiny from fans and the media throughout the 2018/19 campaign.

Every misplaced pass will be analysed and there will be an autopsy every single time a goal is conceded. It comes with the territory.

And just like with Romelu Lukaku last season, the two goalkeepers will regularly be compared even though they're turning out for teams playing different styles.

So who got the better deal? It's what everyone is already talking about. And here at Football Whispers we try to put aside popular opinion and look what the stats say. 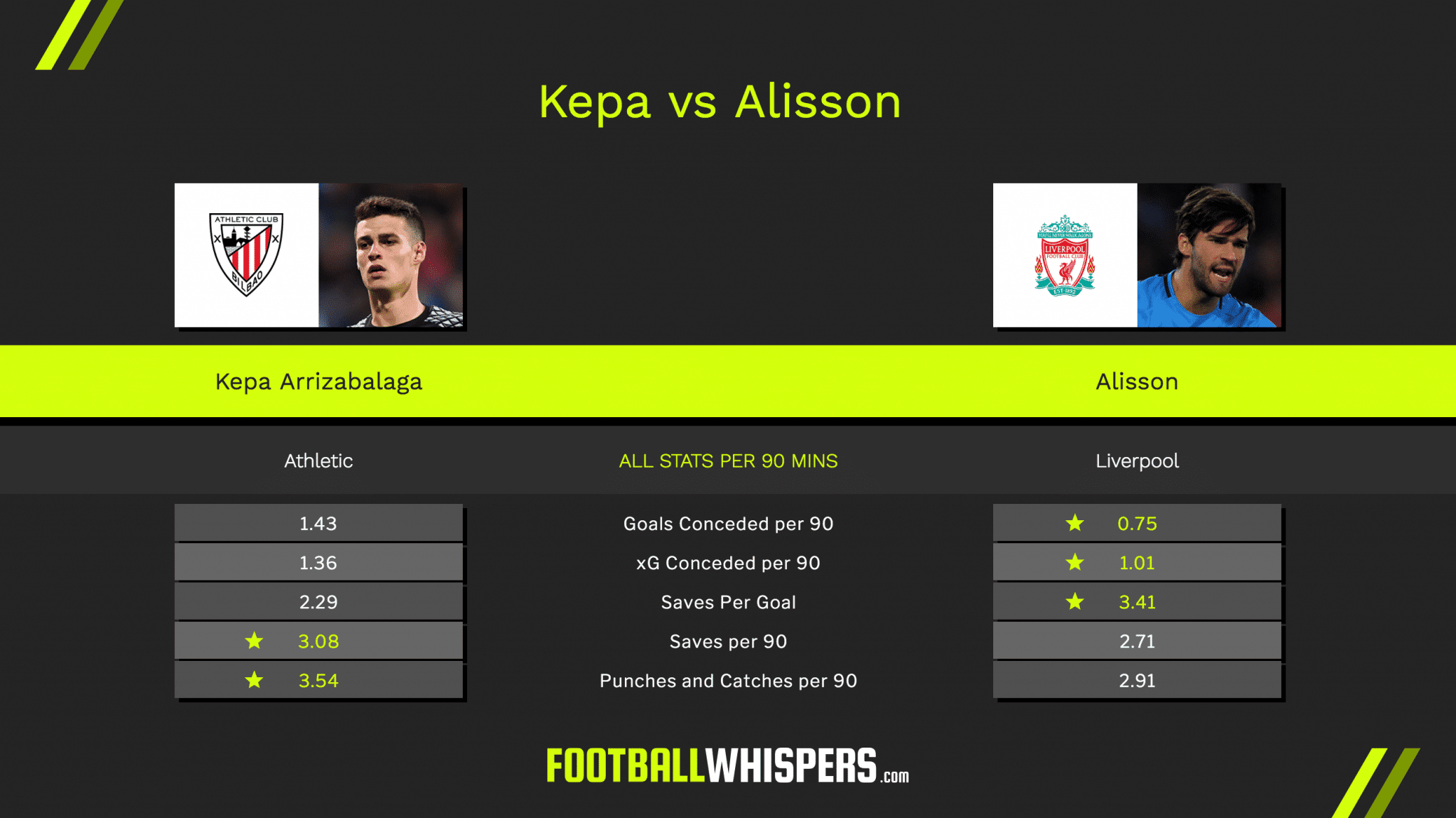 It's not the wisest move to use goalkeeper stats to compare players due to the fact a lot of them hinge on a team's style as well as the league they're plying their trade in.

For example, Kepa averaged more punches and catches per 90 minutes last season but with context it makes sense. After all, Athletic Bilbao faced more crosses.

The key stats to look at when judging keepers are the expected goals conceded vs actual goals conceded. The xG total gives a score to shots a team faced. The better shot-stoppers outperform this total and Alisson did just that.

It's not a huge difference, just 0.07, but over a 38 game season that equates to close to three goals over the expected numbers while Alisson essentially kept out ten extra goals for Roma.

When looking at that metric it makes Chelsea's decision to go big on Kepa look peculiar. If reports are to be believed the Blues baulked at the the price-tag Roma slapped on their No.1. But they ended up paying more for a stopper with less experience and one even further away from the finished product.

Whether it was the right decision won't be clear for a number of years but, in the short-term at least, it's Alisson who is the better of the two.