Thomas Lemar, Naby Keïta and Riyad Mahrez are just three of the players linked with a move to Liverpool since the Merseyside club confirmed the sale of Philippe Coutinho to Barcelona. However, a number journalists with links to the club have suggested that Jürgen Klopp and the recruitment team at Anfield might sit on the £106million they officially banked on Monday until the summer.

It wouldn’t come as a surprise if the club did that. Klopp was vocal during the 2017 winter window, claiming it was a seller’s market with clubs adding a premium to players.

When asked why the Reds hadn’t brought in any reinforcements in a month they crashed out of two cup competitions, the former Borussia Dortmund manager was, as you’d expect, pretty open with his response: “It is not that we don’t want to bring players in. We do. But the thing is, the players we want because we think they help us, the clubs don’t sell. It is not about money in this situation, it is the winter transfer market.

“Clubs are saying ‘no we have half a year to go, we can not find another player like this, we prefer to take money in the summer, than a few pound more in the winter than whatever’. So it is pretty easy.

“You see the situation, it’s tight, it’s close, we know that, but if the right decision is not possible in signing the right player, then you cannot make the wrong transfer.”

Liverpool fans may be hearing their manager say similar in February. But, unlike last season, the club shouldn't be content with what they already have. Furthermore, you also have to take into account the fact Klopp didn't see his side weakened last January, at least not on a permanent basis. Yes, Sadio Mané went away to the African Cup of Nations but he returned in February.

Paul Joyce of The Times suggested in a recent podcast with The Anfield Wrap that the Liverpool manager might see Adam Lallana's return to the first team – he's missed the majority of the season after picking up an injury in pre-season – will fill the void left by Coutinho.

The ex-Southampton playmaker divides opinion at Anfield and it's easy to understand why. His output for an attacking midfielder isn't the most consistent. You could argue that he was part of a midfield three last season but he was given license to roam and at times linked up with Coutinho, Mané and Roberto Firmino to make it an attacking four.

He's also played as part of the attacking trio, and Coutinho, on occasion, started in centre-midfield.

For context, last season he went the best part of five months without a goal in the league and he failed to register a single assist in the second half of the season.

There are some who believe that what Lallana brings to the team can't be quantified, and, to an extent, they have a point. You can't put a number on what he does off of the ball, the space he creates for others and the pressure he puts on the opposition during the counter-press. 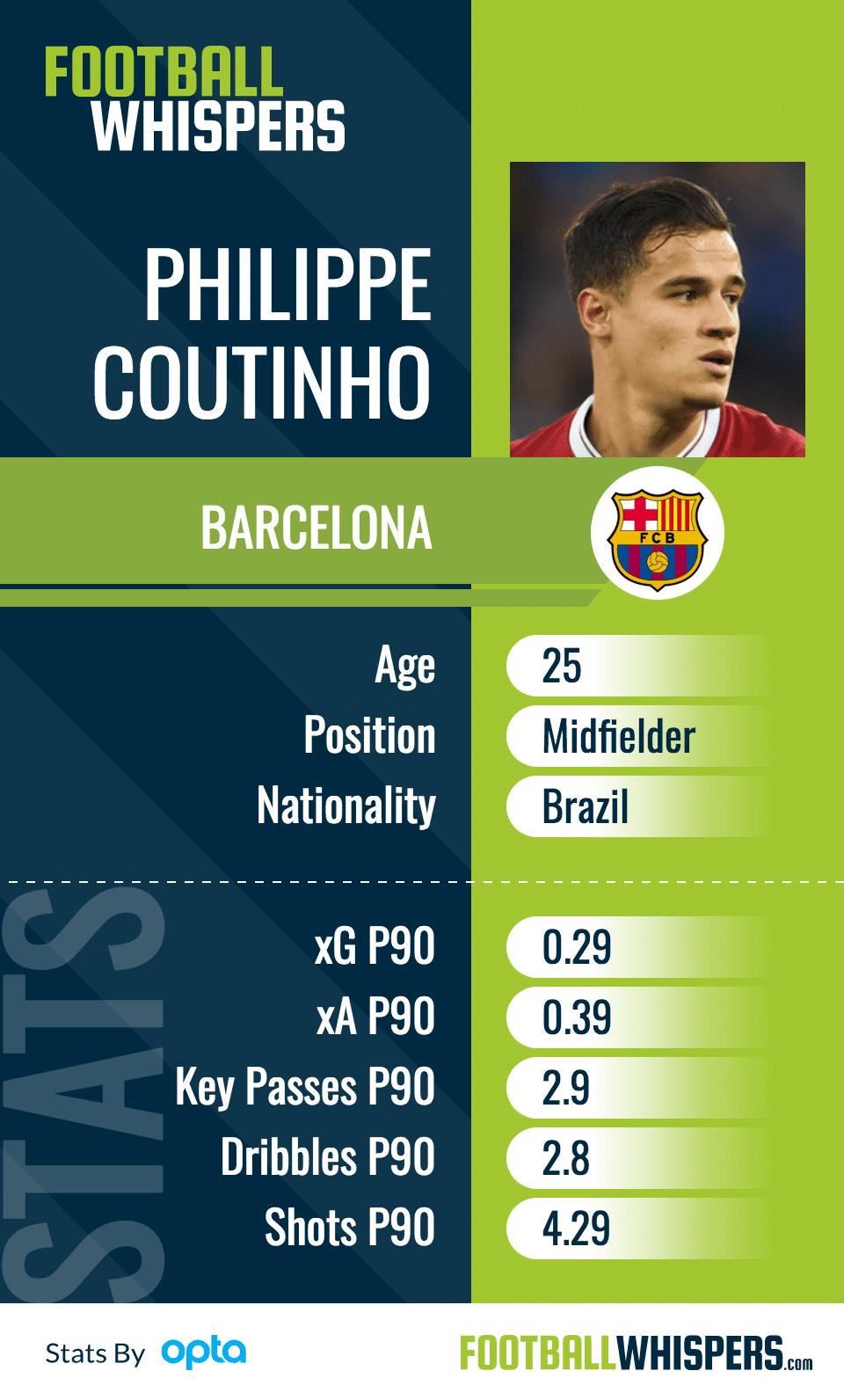 While it may have been difficult to put a number on what Lallana brings to starting XI, the same can't be said for Coutinho. And if the 29-year-old is the man to effectively replace the Brazilian then he's going to have to step it up, otherwise the drop-off is monumental.

Liverpool not only lose a goal threat, they're losing a player with the ability to dribble past the opposition. The graphic above shows Coutinho's stats so far this season. To really emphasise the difference the Brazilian made to the Liverpool team, we've looked at certain stats for the midfielders at Anfield over the past 18 months. We also included Thomas Lemar and Keïta for context.

We combined key passes and dribbles completed per 90 minutes because both are creative stats. 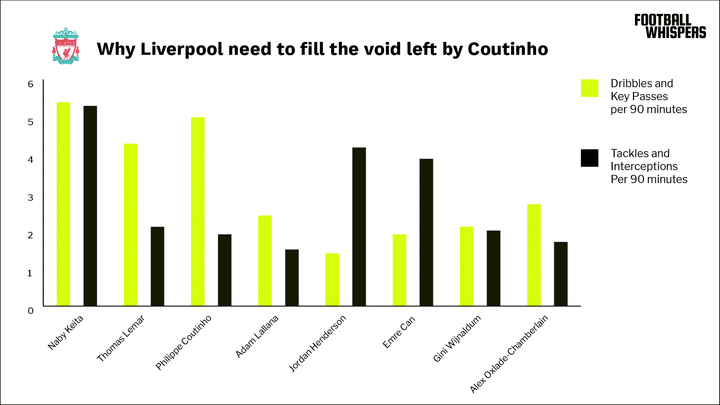 The current crop of Liverpool midfielders fall way short on Coutinho's figure of five, with Alex Oxlade-Chamberlain coming second with 2.7 – however, it's worth noting his stats are slightly skewed after playing wing-back for Arsenal. Lallana is next on the list (2.4), but his total is less than 50 per cent of Coutinho's.

Keïta (5.4) and Lemar (4.3) show why their arrival would fill the void, at least creatively, left by the Brazilian.

Tackles and interceptions aren't the best way to judge how players perform defensively, especially not in a team famed for pressing – pressing is not an individual action, with Liverpool often hunting as a pack; players will drive the opposition into traps but there's no way of quantifying this properly and they're not numerically rewarded for it; it's all very much dependent on their role in the press.

Having said that, Coutinho averaged 1.9 tackles and interceptions, and Lallana is just shy of that total with 1.5. Both Keïta and Lemar average more, and you would imagine Liverpool would benefit defensively from having either of them in their XI.

This season questions were raised over Coutinho's defensive contribution when in the midfield three. Hard to imagine the same questions being asked if Keïta was playing that role. 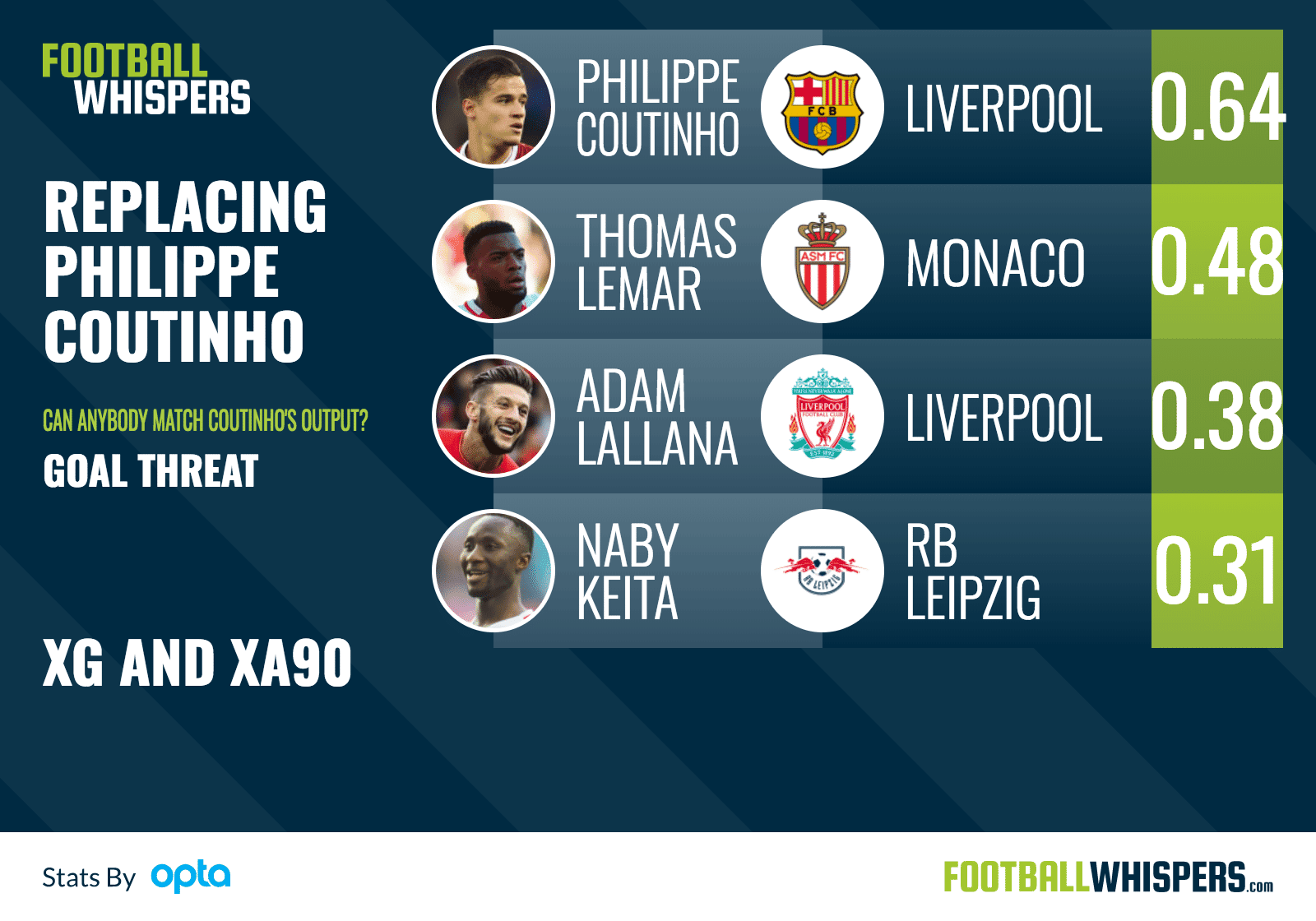 Finally, we took a look at their expected goals (xG) and expected assists (xA). Coutinho's average over the past season and a half has him down to be involved in 0.64 goals per game. The next best on the list for Liverpool is Lallana (0.38). It might not seem like much but over the entirety of a Premier League season but that's a difference of ten goals.

Lemar's average is 0.48, while Keïta's is 0.31, which puts him fourth on the list behind Oxlade-Chamberlain (0.34). When you weigh everything up, it's clear that Lallana on his own isn't enough to replace Coutinho's impact on the Liverpool team. It would need to be the Liverpool No.20 along with one of Keïta or Lemar.

Coutinho's sale presents Liverpool with an opportunity they rarely have. They're the only big hitters with money in the bank this month, so much so that they could, if they wanted, put the squeeze on selling clubs. They could effectively bully teams into selling players, and the lure of a big upfront payday will be too much for many to resist.

Monaco are believed to have softened their stance and will sell Lemar during January. Rumours in France claim a bid of €70million will be considered and, while Liverpool have the money, they may be best served throwing a large chunk of it at RB Leipzig to get Keïta to Anfield six months ahead of schedule.

Liverpool may have statistically performed better without Coutinho this term – they've averaged more points per game and scored more goals per 90 – but his loss is a huge one and Liverpool can't afford not to replace his output.