In August last year, after a lengthy pursuit, Liverpool agreed a deal with RB Leipzig to take Naby Keïta to Anfield next season, with the fee a club record until the Reds' £75million January purchase of Virgil van Dijk from Southampton.

Guinean midfielder Keïta was outstanding in the Red Bull-owned club's charge to a second-placed Bundesliga finish last season, attracting interest from across Europe, with Liverpool and Jürgen Klopp's strongest.

The 22-year-old former Red Bull Salzburg player made no secret of his desire to join the Premier League side, while the Merseysiders attempted to push the deal through ahead of schedule following the sale of Philippe Coutinho to Barcelona last month.

Some observers have suggested, with his mind already on his future club, Keïta has not been entirely focussed this season, failing to replicate the form that made him so coveted in the first place.

That assessment, however, is unfair. Liverpool can rest assured that their investment in the Leipzig star is every bit as well-placed now as it was when the deal was first struck last summer.

If anything, the way Keïta's role at the Red Bull Arena has changed this term will actually equip him better for his eventual Anfield arrival. It is precisely because of these small tweaks in his remit, though, that some have come to question his output, which fails to examine the broader picture. 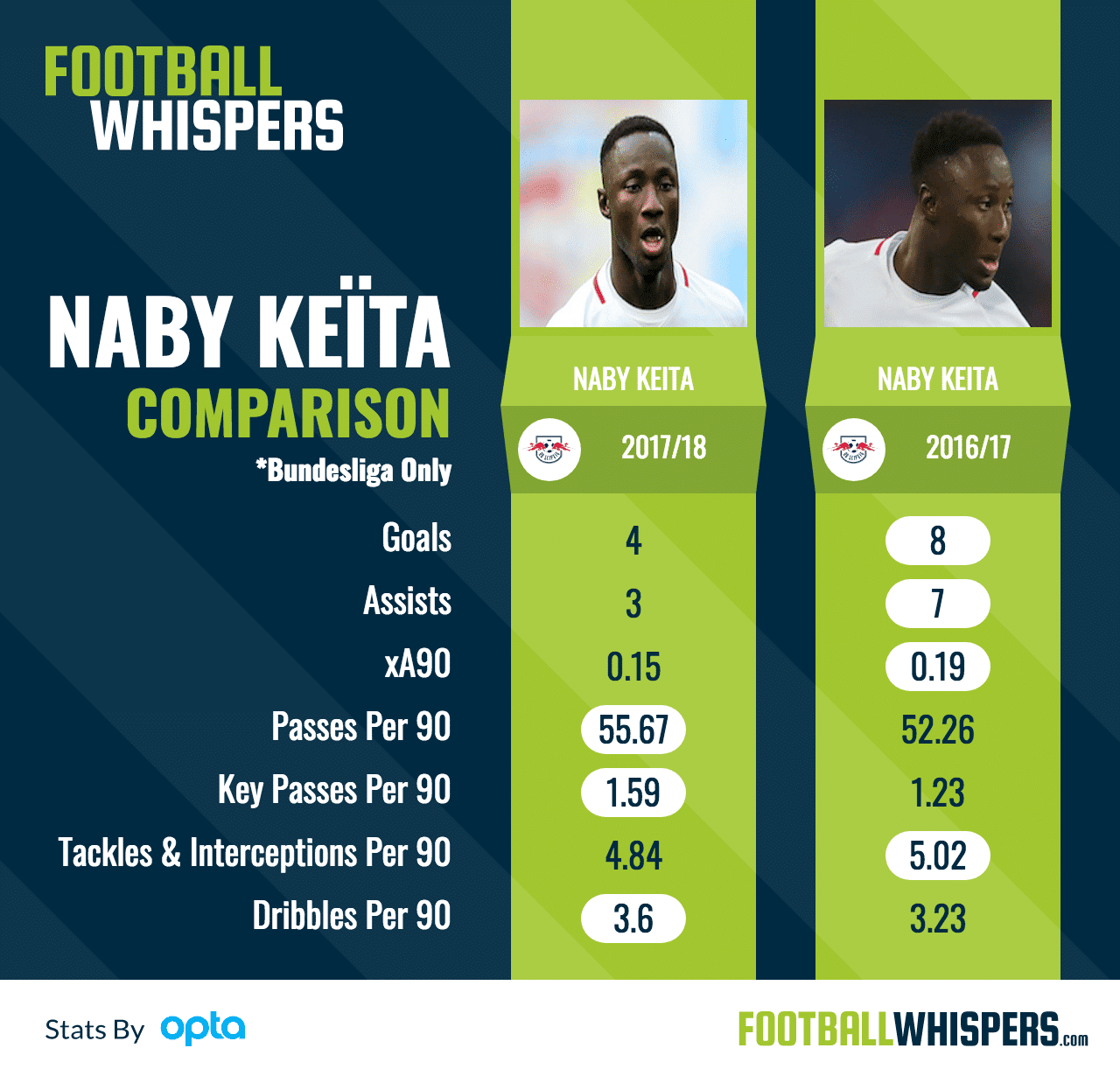 Whereas last season the diminutive midfield dynamo was unusually productive in attack for a player whose starting position is so deep, the summer additions of Jean-Kévin Augustin and, in particular, Bruma, the Portuguese winger brought in from Galatasaray, have meant the attacking side of Keïta's game has been de-emphasised.

As the above graphic shows, this season Keïta is unlikely to match his returns for goals and assists from last term, but his adaptation to a more controlling remit has been equally as impressive as his final-third production from last year.

Maintaining his exceptional ball-recovery numbers, making a combined 4.84 tackles and assists per 90 minutes on average in the Bundesliga, Keïta is also seeing more of the ball, conducting play from deep with 55.67 passes per 90, improving his pass accuracy from 81.8 per cent to 84.7 per cent.

In addition, as one of Europe's finest middle-third dribblers, Keïta is completing even more take-ons than his already outrageous average from last season, in which only Borussia Dortmund winger, Ousmane Dembélé, now a Barcelona team-mate of Coutinho, was a more prolific Bundesliga dribbler.

Keïta's dribbling, control, spatial awareness and strength is key to evasiveness when pressed. When the Guinean wins the ball, the opposition's counter-pressing efforts are often rendered self-destructive as he snakes away from pressure, taking multiple opponents out of the game and exploiting the space they vacate. And this aspect of Keïta's game is sharper than ever. 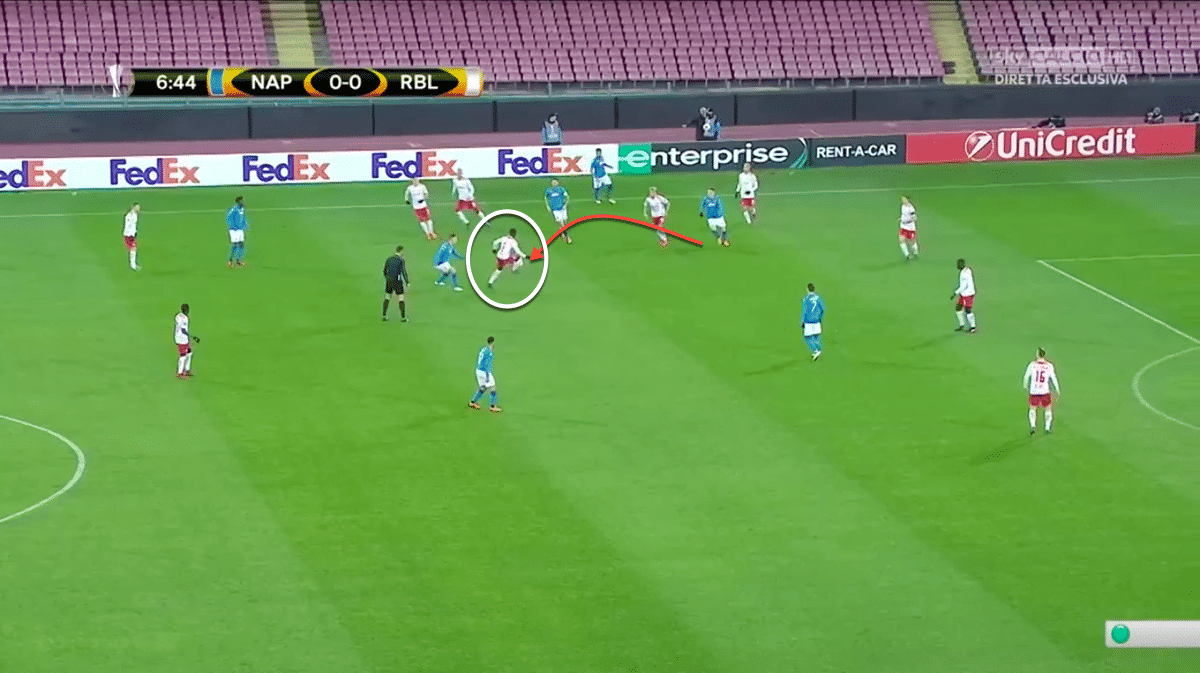 Above, we see these skills in full effect in Leipzig's recent Europa League victory over Serie A leaders Napoli at the San Paolo. Having intercepted a loose ball, Keïta is immediately put under pressure. 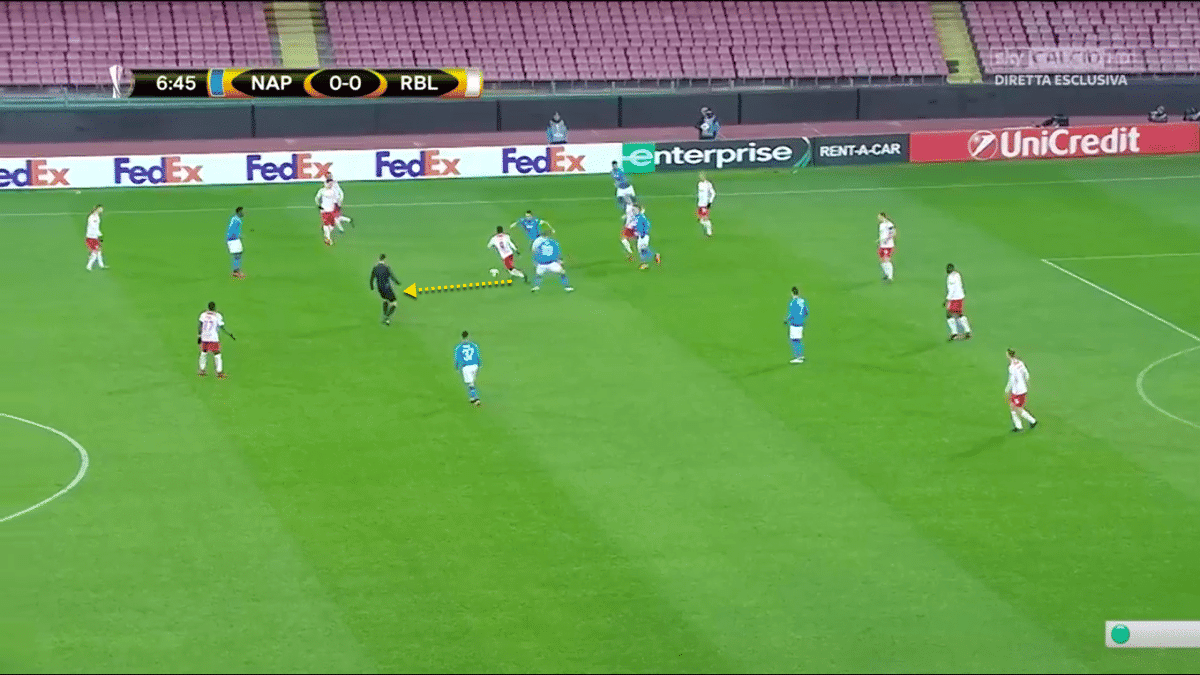 But his immaculate touch ensures the ball is shielded, and he turns away from the challenge, moving his team forward. The simpler option would have been to play a short pass back to one of the Leipzig centre-backs, but this would have led to the defender's coming under intense pressure close to their own goal.

Instead, Keïta backs his ability to protect the ball, turn and move forward. 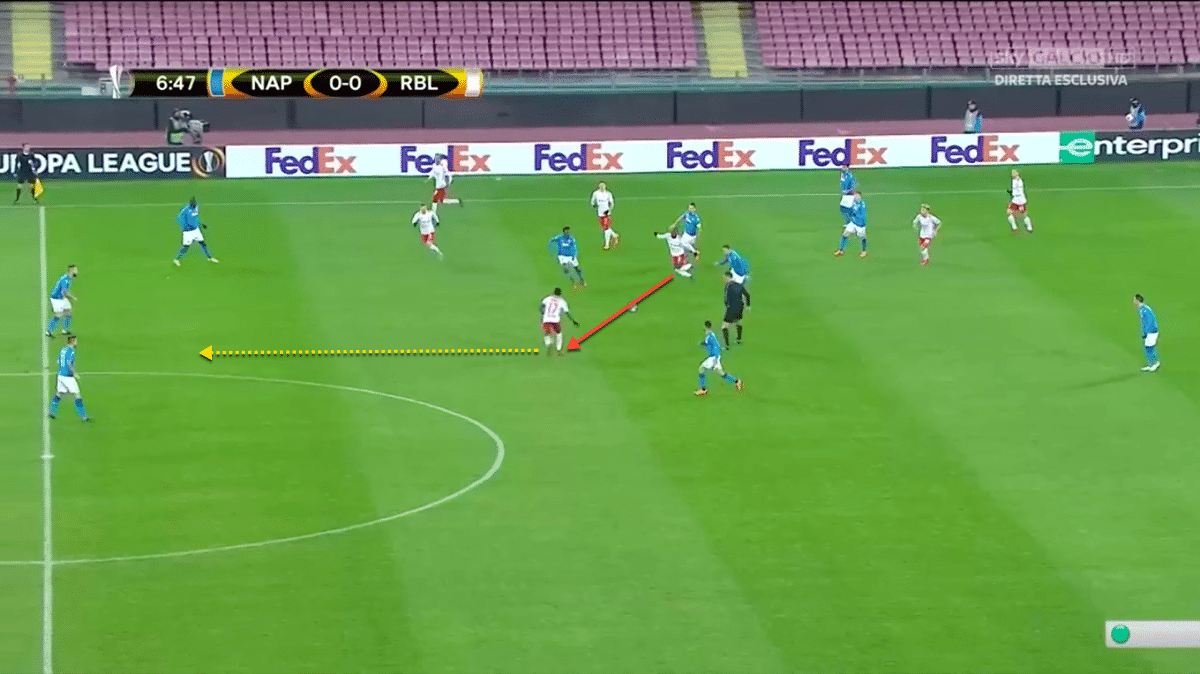 In doing so, Keïta draws the attention of Napoli's defensive midfielder, Amadou Diawara, drawing the former Bologna man toward the ball, thus creating space centrally for Bruma, which he then releases the Portuguese attacker into with a simple pass.

This ability to transition from defence to attack will be invaluable for Liverpool, where, in Klopp's thrilling, counter-attacking system, he will feed the likes of Mohamed Salah and Sadio Mané as they stream forward at speed. 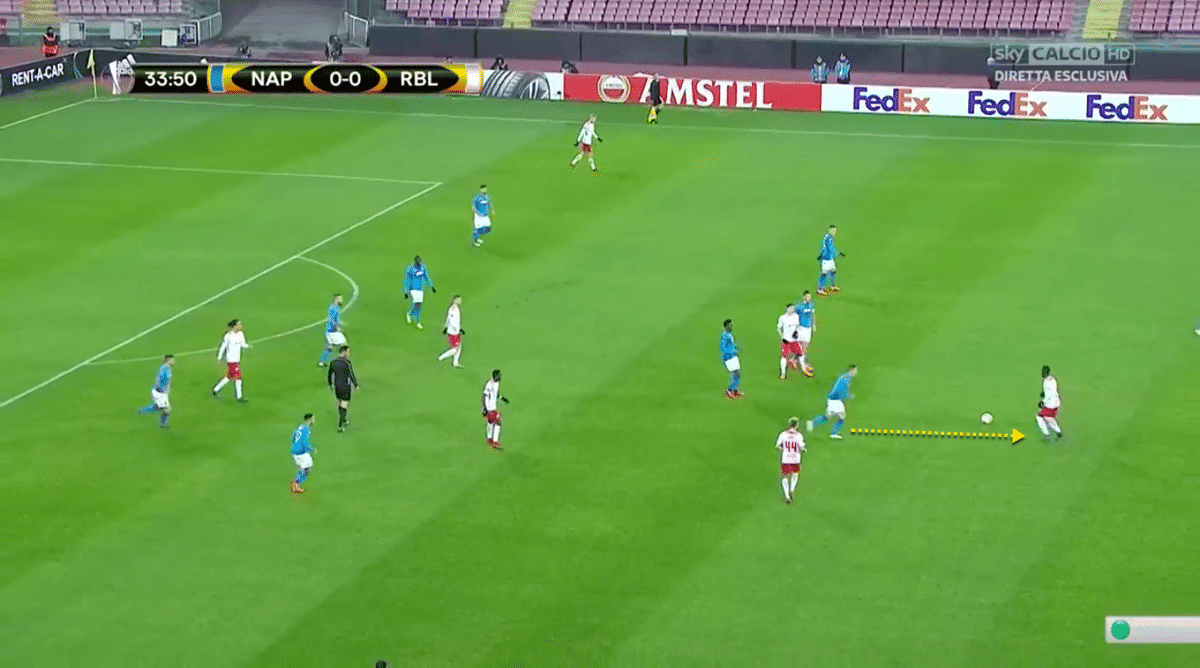 This time, from the same game, we see how Keïta's evasiveness is valuable in attacking situations, even when not directly leading to a shot or killer pass. Positioning himself on the edge of the Partenopei‘s defensive shape, he tasks himself with ensuring Leipzig remain camped in the attacking third.

When receiving the ball, he is once again immediately closed down. With few viable options ahead of the ball, a backward pass is again the ‘safe' move. 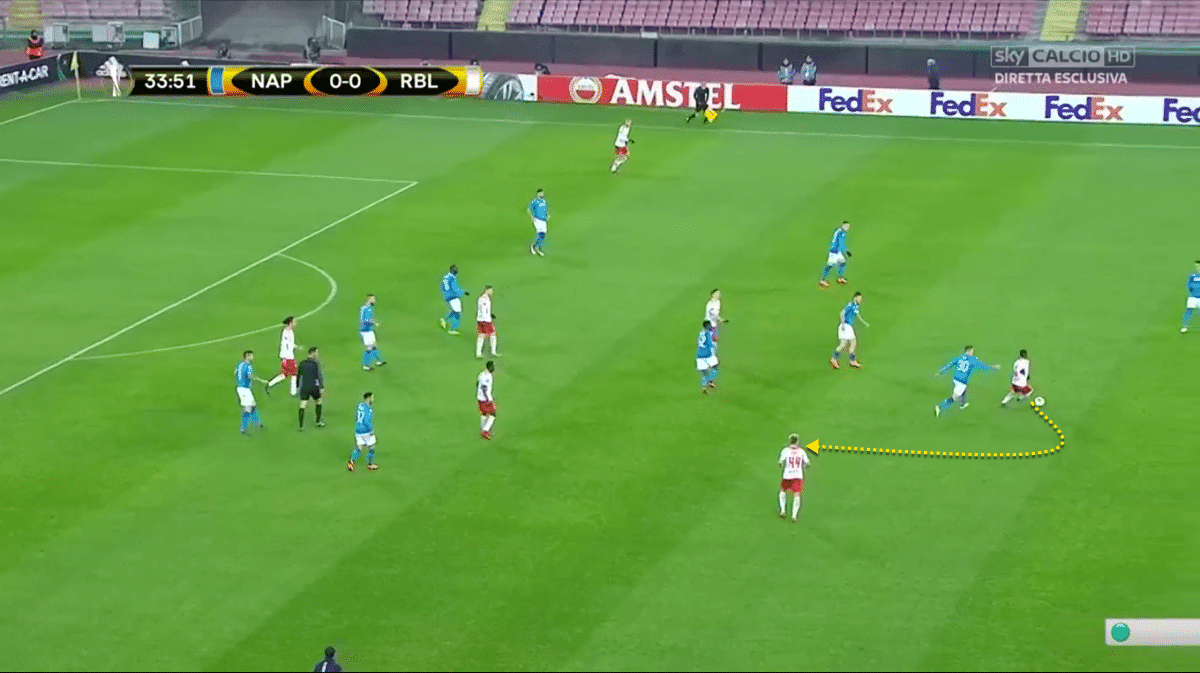 But Keïta shows faith in his ability to navigate through pressure and keep his side moving forward, pirouetting free before breaking into the space his spin has created. 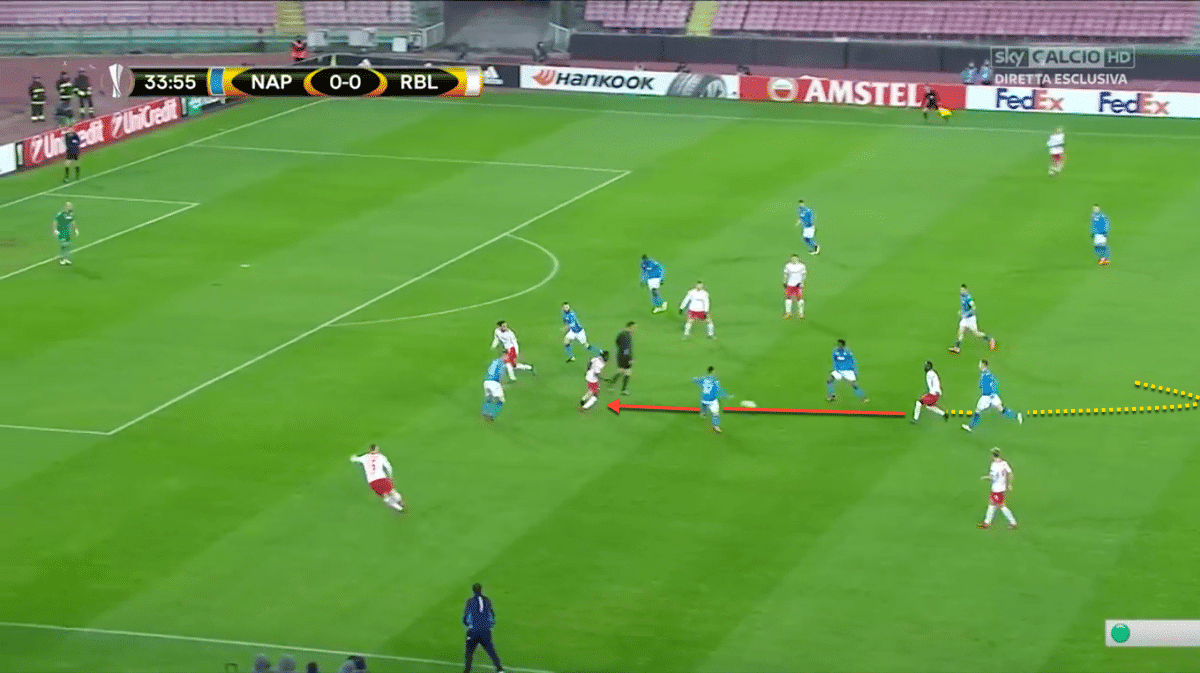 One of Keïta's most unique and eye-catching attributes is his ability to play accurate, defence-splitting passes while on the run, never breaking stride and catching opposition defences off guard.

Here, as he draws pressure once more, he slips the ball between two Napoli players, picking out Bruma between the lines.

This sequence demonstrates how Keïta is not only adept and springing attacks from deep, but also in maintaining offensive pressure, sweeping up behind the attack and recycling the ball forward.

As a central midfielder, Keïta can do it all and more; he is a Swiss Army knife equipped with a tool to make any task seem effortless. The Van Dijk signing might be Liverpool‘s biggest and the one that grabs most headlines, but Keïta is their game changer.