At some point in every player’s career, there is a moment, a spell of games and a realisation that they are no longer the force they once were. There is a feeling that Petr Cech may be reaching that stage at Arsenal.

Now, 34 years old, there have been a few moments like against West Bromwich Albion and Liverpool, where you would want your goalkeeper to do better.

Injury against the Baggies will rule him out for a month with a calf injury and it has sparked rumours that Arsène Wenger sees a new goalkeeper as one of his priorities this summer.

Reported by the Sunday Mirror, Leicester City’s Kasper Schmeichel has emerged as a somewhat surprise target for the Gunners.

The Danish shot-stopper was crucial in the Foxes unexpectedly winning the Premier League title last season and he was rewarded with a contract extension in August, tying him down at the King Power stadium until 2021.

At 30 years old, he should still have at least three or four years at his prime, but as Football Whispers exclusively revealed when he was linked with Liverpool in January, it would take a bid of around £20million to convince Leicester to do business. Once they confirm their survival in the Premier League, they will want to assess the pieces they have in their squad.

Son of the great Manchester United shot-stopper, Peter, Kasper has been a hero for the Foxes, both last season and this season. He has also proved his worth in the UEFA Champions League, stunning Spanish side Sevilla with two penalty saves. Now he will have the chance to go up against Atletico Madrid’s Jan Oblak for a place in the semi-finals.

Schmeichel has already achieved something that many of this current Arsenal team haven’t, reaching the quarter-finals the Europe’s elite competition. And that could be a huge attraction for Wenger. the Danish ‘keeper now has experience in winning the league and taking on the best players.

If he can play at this level until he reaches 34, then Arsenal would be picking up a very good option that could command their defence for the next four years.

What Schmeichel would bring to Arsenal 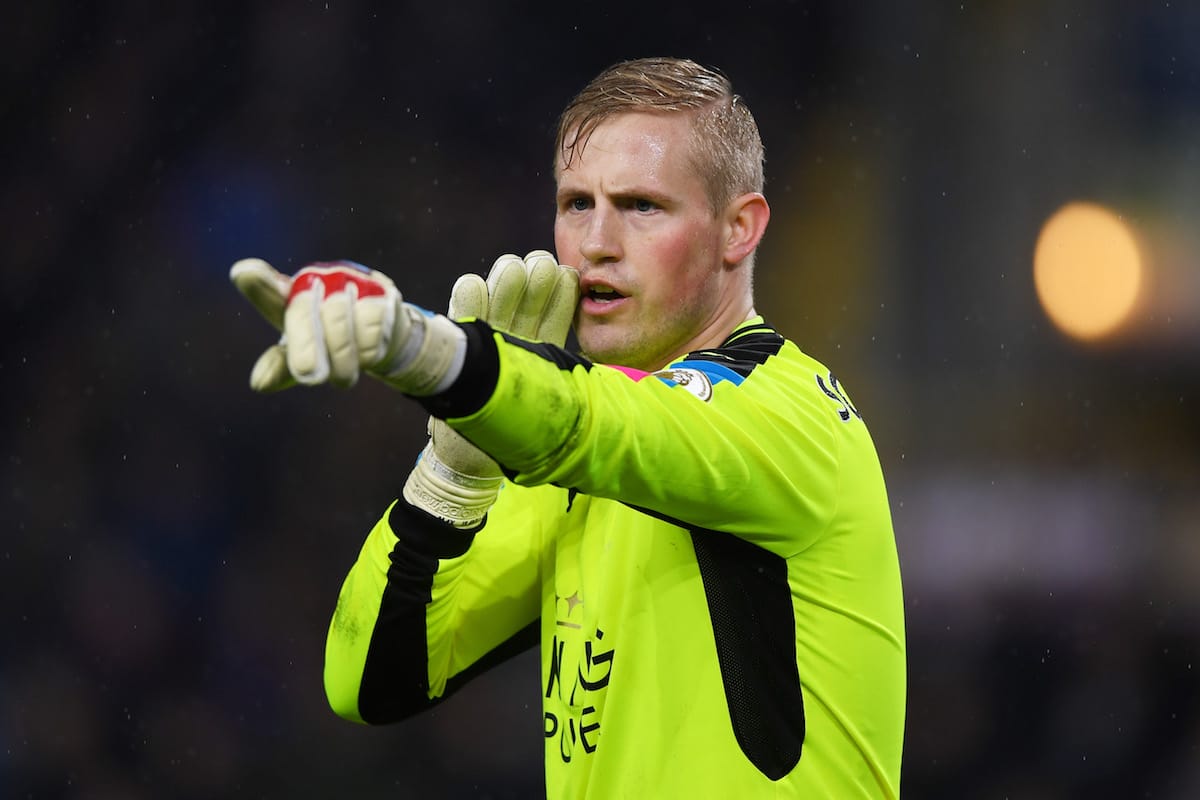 Schmeichel is regarded as an excellent shot-stopper and is relatively comfortable with the ball at his feet, however, he has played very well in a counter-attacking team and tends to look long with his kicking distribution – not something that would instantly Arsenal and Wenger, but that’s not to say he’s not capable.

Only Cech made more clean sheets than Schmeichel last term, with the Arsenal man picking up 16 to the Dane’s 15. That wasn’t just a case of a strong defence, with the 30-year-old making 80 saves last season, that ranked him fifth amongst Premier League goalkeepers. Heurelho Gomes came top with 103.

What he would bring is leadership and good communication, which the defence could perhaps benefit from. Although Laurent Koscielny is regarded as one of the best in the Premier League, Shkodran Mustafi needs some leadership to bring his qualities through and someone who can shape and guide the back four would be a welcome addition. He has, on occasion, skippered the Midlands team, so you know he is a voice that carries some weight.

Is he the best option though, and how do the other players that Wenger could call upon measure up? 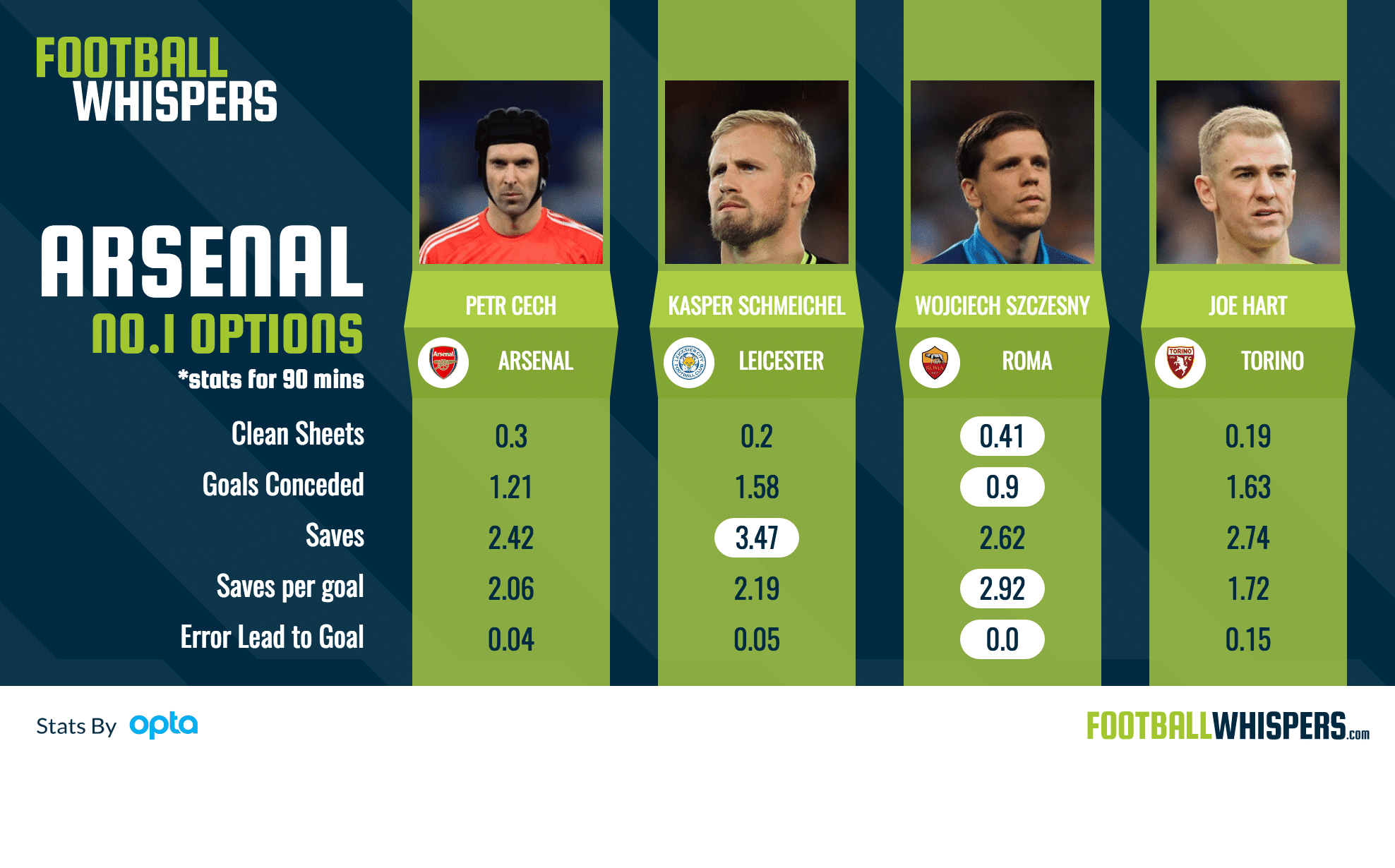 Wojciech Szczesny is enjoying an excellent campaign for Roma in Serie A and makes the most clean sheets per 90 minutes than the four goalkeepers we have picked out.

He has also conceded the fewest goals, with 0.90 per 90, Cech is against second in this regard with 1.21, but you must consider the level of performances from the men in front of Schmeichel this season. Arsenal fans may moan about their defence, but they wouldn’t swap it for the way the Foxes were playing for large spells of this season.

You could make the same argument for Hart, as only four clubs have conceded more goals than the Turin club this term.

Out of the four, Hart has made the most errors leading to a goal (0.15), so you can’t blame the defence for everything. Amazingly Szczesny’s tally stands at 0 for the season. The Pole also leads the way in the amount of saves he makes between goals.

Schmeichel is second, with 2.19, and without his ability to keep the ball out of the net, there is no way that Leicester would be out of danger in the league.

Statistically, the 26-year-old playing for Roma would be the ideal option. He was always regarded as the long-term solution to the goalkeeping issues at the Emirates, but Polish legend Zbigniew Boniek told Italian radio that it would be a case of Wenger or Szczesny this summer.

“I had dinner with Szczesny and he told me that he would like to stay at Rome.”

“If Wenger stays, I don’t think he will go back to London, while his contract expires in 2019 anyway.”

“I can therefore see two possibilities. Either Arsenal recall him, or they name their price.”

Wenger looks set to stay at the club as rebuilding plans have already begun behind the scenes, so the Gunners would have to set their sights elsewhere for a new goalkeeping option.

Would Schmeichel be a good move?

Schmeichel is as excellent an option they will find in the Premier League. He has the experience and the commanding presence to upgrade the defence, something that has always been a doubt over Hart’s game. The former Manchester City goalie shouts a lot, but that doesn’t make him a calming influence on a back-line that needs authority.

Arsenal could do a lot worse than the Leicester City keeper and if they manage to finish in the top four this season, another stab at the Champions League could be enough to convince him to move to North London.