Barcelona are at a crossroads in more than one sense. Boss Luis Enrique is set to clear his desk and depart after three extremely successful years in charge at the Camp Nou, while a number of their stars, who have helped the club achieve historic feats for the best part of a decade, are reaching an age where a contingency plan is needed.

Xavi Hernández, now 37, left the club after their 2015 treble success, while his long-time midfield partner Andrés Iniesta, 33, has just a year to run on his contract. Lionel Messi, arguably the best player of all time, is in a similar situation while turning 30 in June, the same age as his fellow striker Luis Suárez.

Finding replacements for these players could be an impossible task, but one potential option for the latter is emerging. According to the Daily Express, Ajax striker Kasper Dolberg has admitted having a soft spot for the Blaugrana in the past, and he could be a transfer target in the future.

It is hard to admit, and individually speaking may not be true, but the team may well be past its best. Comprehensively beaten by Juventus in the Champions League quarterfinals, following the most remarkable comeback in the competition’s history in the previous round, they have now fallen at that hurdle three times in four years. Real Madrid also won La Liga, despite late pressure from the Catalans, so changes are definitely needed.

Kasper Dolberg has scored more goals (6) in the Europa League this season than any other U21 player.

Dolberg is a 19-year-old Danish international striker who has shot to the very top of the European game this season. Football purists will be glad to see the return of Ajax in this form, with a team full of young players bringing back memories of the side that won the 1995 Champions League under Louis van Gaal.

Everybody knows the story connecting Ajax and Barcelona and the impact the late Johan Cruyff had on both clubs, and that is part of the reason why Dolberg would suit Barcelona as an heir to Suárez, who also enjoyed a spell in Amsterdam before joining Liverpool in 2011.

The Dutch side lost to Manchester United in Wednesday’s Europa League final, with Dolberg coming off in the second half after an ineffectual performance. But for such a young player, in such a young team, he has shown maturity and quality beyond his years, scoring 16 goals in just 28 Eredivisie games, and a further six in 13 in Europe. 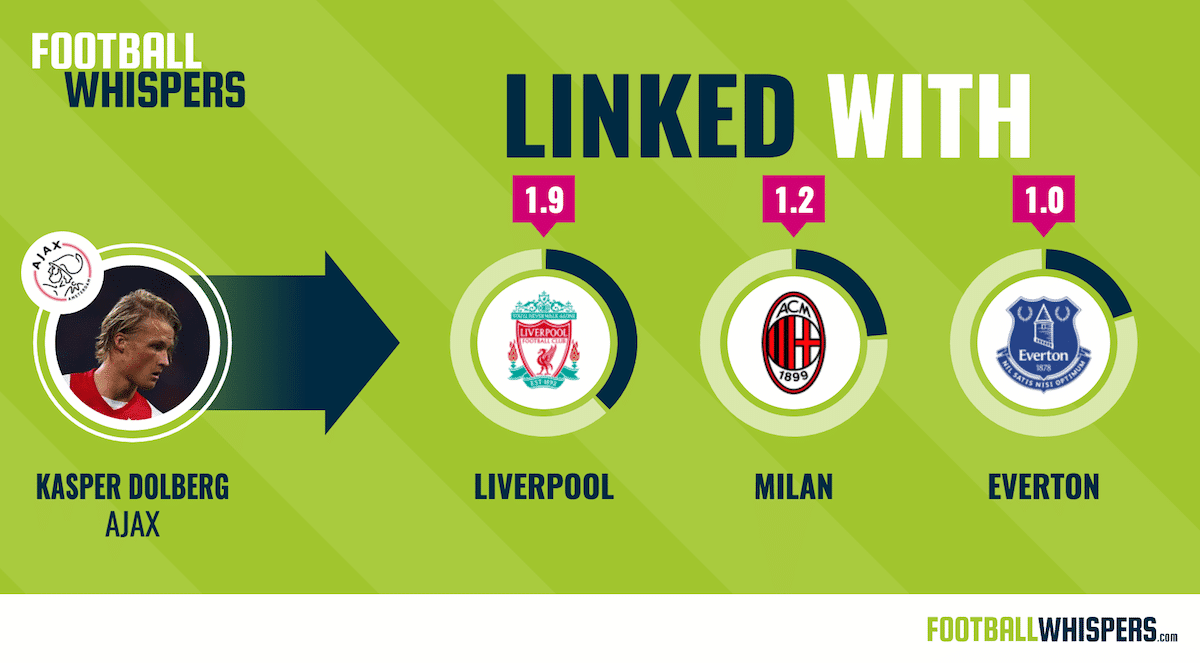 Ajax boss Peter Bosz took the club back to basics after Frank de Boer departed in 2016. Now, more than at any time in the past two decades, they religiously stick to the 4-3-3 Cruyff ideology which brought them and Barça so much success, with an average age of around 22 facing the Red Devils in Stockholm.

Statistics do not tell the full tale; there are a number of reasons why Dolberg could be a darling of the Barcelona fans in a few years. His aerial presence, standing at 6ft 11⁄2ins tall, may be a threat and he will definitely lead the line, but he is nimble enough to create space for others by making intelligent runs, without slowing the highly intense play down.

This is not to say he will step into Suárez’s boots immediately, because the Uruguayan has a lot more goals to score alongside Messi and Brazilian superstar Neymar.

As they all get older, though, the shape of Barça’s attack will become more conventional. Messi has made the false nine position his own since 2009, and while he starts on the right-hand side under Enrique, he and Suárez often swap places to get the Argentine closer to goal.

By the time Dolberg would be taking over the mantle, he would be required to make direct forward runs, rather than into the channel, more like the way Samuel Eto’o did under Frank Rijkaard – another man with both Barcelona and Ajax links – did between 2004 and 2006 particularly.

Because Barça are heading into transition, it is unknown how they will proceed. Ernesto Valverde could well be their new coach, according to the BBC, after leaving Athletic Bilbao. And while he loosely shares the philosophy on ball possession and high pressure, he does not go to the extent that Cruyff-inspired Ajax and Barça to in his time at each club.

It is an opportunity for evolution, and by new means, too. For a long time, there has been a conveyor belt of quality coming up through the ranks at La Masia, the youth academy. Iniesta and Messi, along with other current players Gerard Piqué and Sergio Busquets, have all come through, but there doesn’t seem to be the same level of quality on the horizon, forcing the club to turn to the transfer market.

By signing the likes of Neymar and Suárez, they have followed Real Madrid’s heavy spending model, but Dolberg would combine their financial muscle and ability to develop talent themselves, maintaining the identity they are in danger of losing.

However religiously they are stuck to, the shared principles of Barcelona and Ajax will be etched into their play forever. The Spanish side must now decide how they move forward, but in Kasper Dolberg, Ajax have perhaps the perfect striker waiting to write the next shared chapter in the history of two European heavyweights.