Loris Karius’ acrobatic save to keep Liverpool's lead intact was described as a “save of the cameras” by Graeme Souness, but it was much more than that. It was one of the key moments during the Reds’ win over Southampton and perhaps an even bigger moment in the German shot-stopper’s career at Anfield.

A good passage of play, which saw the home side overload the back post, resulted in Dušan Tadić whipping a cross in from the left. The ball eluded Andrew Robertson at the back post and James Ward-Prowse headed a looped effort towards goal.

Karius, who initially started to come for the cross before retreating, managed to tip the effort over the bar. At first glance it was a routine save with the ball being straight at him. But when you see a replay from behind the goal you appreciate just how good it was. The 24-year-old sets himself for an effort at his near post but adjusts quickly to prevent it looping over him.

But the biggest positive to be taken from the save? Just how proactive Karius was. He reacted quickly to get back onto his line and in a position to make a save. If he didn’t then Ward-Prowse’s header would’ve been the equaliser.

How often do you see a goalkeeper standing in no-man’s land after coming for a cross and not getting anywhere near it?

Liverpool fans are finally starting to see the goalkeeper they thought they signed back in the summer of 2016. He’s aggressive, assertive and confident and now his upturn in form has reportedly done enough for Liverpool to end their pursuit of Roma's Alisson.

Paul Joyce of The Times revealed on Friday that Klopp has turned his attention away from the Brazil No.1 in the hopes of helping Karius grow into Liverpool's long-term option between the the sticks.

Originally Alisson was given a price tag of around €60million, but the Italian side are hoping to tie him down to a new contract, with an increased release clause of €90million.

Now they are out of the race for the Brazilian, the German coach has flung his weight fully behind the German keeper.

The saves he's made are all ones he's expected to make but that doesn't necessarily mean they're guarantees. Furthermore, Karius has been instrumental in orchestrating these situations.

Against Tottenham Hotspur his save against Heung-Min Son only came about after the German keeper came off his line to narrow the angle. He rushed the Tottenham Hotspur No.7, who was in a good position, into taking the shot early.

Karius did exactly the same thing against Southampton. When Pierre-Emile Højbjerg was able to bring down a cross on the edge of the six-yard area, the Liverpool No.1 was once again quick off his line, spread himself and the angle for the Denmark international disappeared.

It's not a difficult save and it's one you'd expect to see from a Premier League goalkeeper but the way he reacts to situations is the equaliser. He's turning potential high quality opportunities into half chances.

Liverpool are better with Karius

The Reds are benefitting from his inclusion in Klopp’s starting XI, and not just defensively. He's played a part in a number of goals over recent weeks.

His quick release of the ball was instrumental in the opener against the Saints. Virgil van Dijk nodded a pass back to Karius and Emre Can instructed the No.1 to slow the game down. He ignored his captain and threw the ball to Alex Oxlade-Chamberlain.

The ex-Arsenal man drove into the space and clipped the ball forward to Mohamed Salah. Wesley Hoedt should have cleared, but made a mess of situation and Salah slotted the ball to Firmino who stroked it past Alex McCarthy.  There's just ten seconds between Karius releasing the ball and the Southampton net rippling.

The speed at which Karius looks to get Liverpool going helps break down teams who press high as well as those who sit deep. The 24-year-old was criticised for speeding things up against Spurs last weekend and the example used was when he rolled the ball out to James Milner. The 32-year-old dawdled in possession and the chance to counter was wasted.

But against Manchester City, during the epic 4-3 victory, you saw the impact it has when executed properly, and it's why Klopp will encourage Karius to keep on doing it. 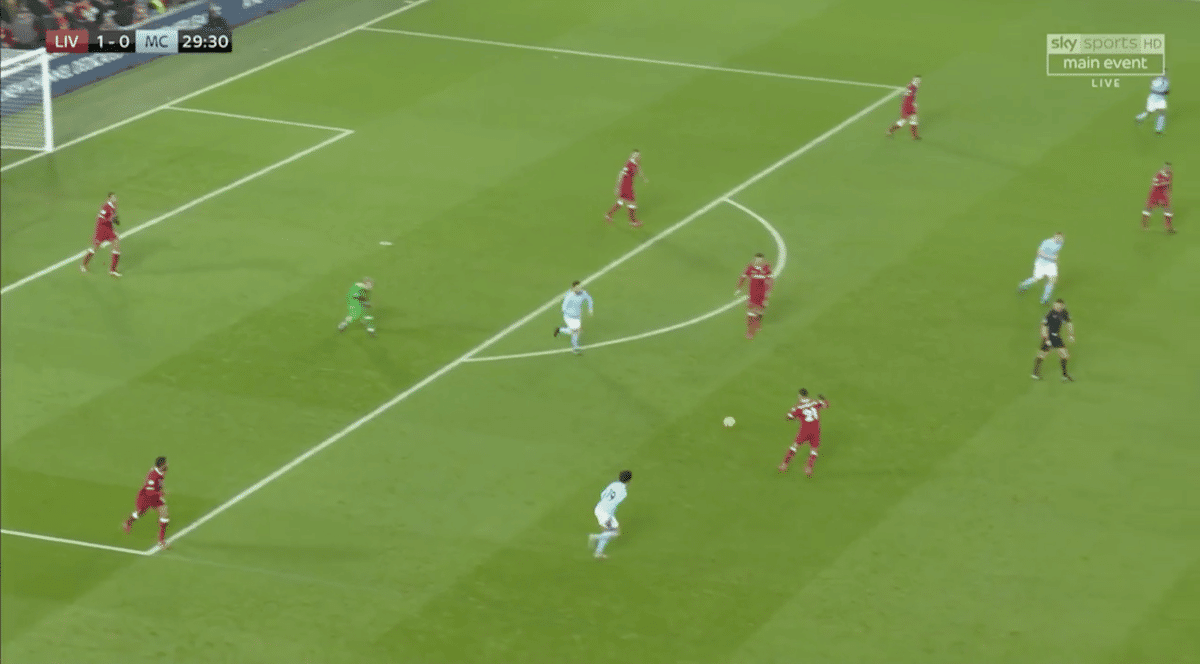 In the picture above the ball is rolled to Oxlade-Chamberlain. He's up against arguably one of the best pressing sides in Europe and this situation is a prime pressing trigger.

The Liverpool No.21 is facing his own goal and City have players in good areas. He's immediately under pressure. 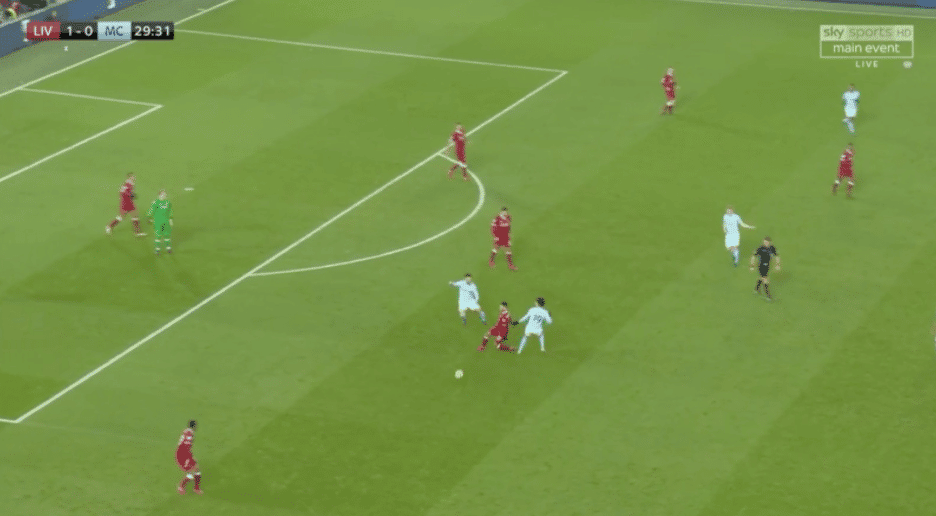 Oxlade-Chamberlain, to his credit, doesn't rush. He's composed enough to take it past Leroy Sané before playing it wide to Joe Gomez. It's high risk but, if it works, it's worth it. 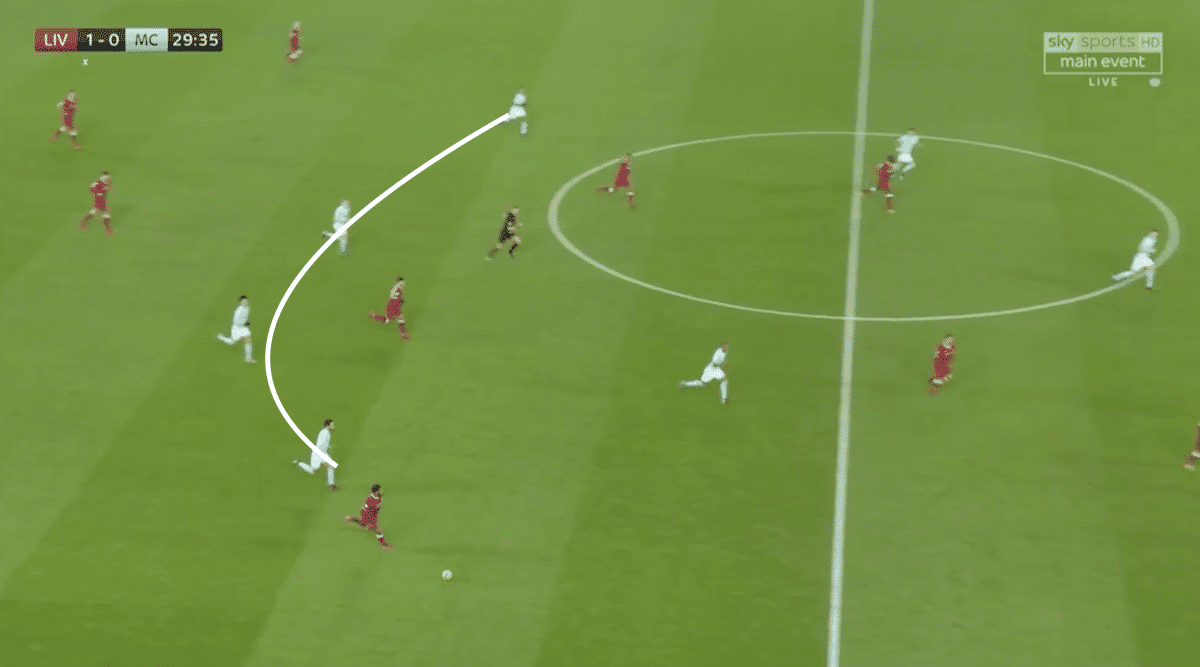 Gomez has acres of space to drive into and the City midfield, the majority of it, has been taken out of the game. The ball is now behind them and Liverpool are charging towards their defence. In the above picture you can see six players in red behind the City line while the away side have just the three on screen and one tracking Salah.

A lot was reliant on Oxlade-Chamberlain's composure but this opportunity doesn't materialise without Karius' quick release of the ball. Against Spurs it backfired because Milner wasn't as quick at getting the ball to the right-back.

His kicking is also a positive. No, he's not as accurate with his passes as Ederson, but Karius has played a part in goals against Spurs and Man City. His technique allows him to almost float the ball to his team-mates, which gives them more of a chance to control and attack.

Against Pep Guardiola's side, a long ball forward from Karius was unintentionally flicked on by Nicolas Otamendi. That forced Fabian Delph to come inside and cover which in turn gave Oxlade-Chamberlain space to power forward and rifle a shot home.

Meanwhile, against Tottenham, Karius' clearance reacheed Jordan Henderson in midfielder. The captain headed it forward onto Sadio Mané who nodded the ball towards Firmino. Mauricio Pochettino's men have bodies in defence and win the ball back, but Eric Dier played a pass towards his own goal which was met by Salah who scored.

At first glance Karius' clearances may just seem like aimlessly lofted balls forward. It's because he's not as pinpoint as his Man City counterpart, however it's just as effective. The chipped technique tempts the opposition into going for the ball and creates space to exploit – perfect for how Liverpool play.

The Reds have already drawn up a shortlist of goalkeepers to make a move for in the summer according to reports. Karius' recent performances won't change this but if he's able to sustain this form, so it's no longer seen as a purple patch and is considered to be the norm, then Klopp might shelve plans to bring in the £50million rated Alisson.

For now, at least, Liverpool need to make the most of having a confident keeper and build an understanding between Karius and a first choice centre-back pairing.