From the moment Karim Benzema arrived at Real Madrid from Lyon in 2009, he was stuck in the all-consuming shadow of Cristiano Ronaldo.

The two players were unveiled at the Bernabéu in the same week and while the Portuguese drew a crowd of around 90,000, a more modest 20,000 came to the French star's presentation.

And over the next eight seasons, Benzema became Ronaldo's faithful sidekick. He sacrificed his own game to aid the one-man brand that is CR7 and ensure Los Blancos collected trophy after trophy.

“Cristiano and I get on well and I like playing with him,” the striker told Canal Football Club in 2017. “He is more egotistical than me but that's normal, it doesn't bother me. In the end, it's good for the team.”

Ronaldo's goal tally swelled and topped out at 61 in 2015/16. Benzema, meanwhile, only struck more than 20 LaLiga goals in two seasons while alongside the Portuguese.

“I'm at a big club and a lot is expected of me,” he admitted in an interview with AS in 2014. “I'm a Real Madrid striker and that means I must score in every game. That's how it is.”

Yet it wasn't. Not truly. Benzema was a facilitator; a man who made those around him better. It was a selfless role and one that wasn't always appreciated by the Real Madrid fans – he was whistled and jeered in 2013, 2014 and 2017.

But when Ronaldo departed for Juventus in the summer of 2018, Benzema was thrust into the spotlight. Real opted against spending big to replace their all-time top scorer. Instead, they trusted those in situ could pick up the slack.

Gareth Bale – partly down to injury – was unable to. Neither could the likes of Marco Asensio and Isco. Young Brazilian Vinícius Júnior dazzled when given an opportunity, but he wasn't expected to be prolific in his debut campaign.

The goalscoring burden, almost ten years after he arrived, finally fell at Benzema's feet. And he responded. He ended the 2018/19 campaign with his second-best return in a Real Madrid shirt: 30 goals in all competitions of which 21 came in LaLiga.

And this term, at the age of 32 years old, he has become the elite goalscorer many expected when he starred for Lyon all those years ago. 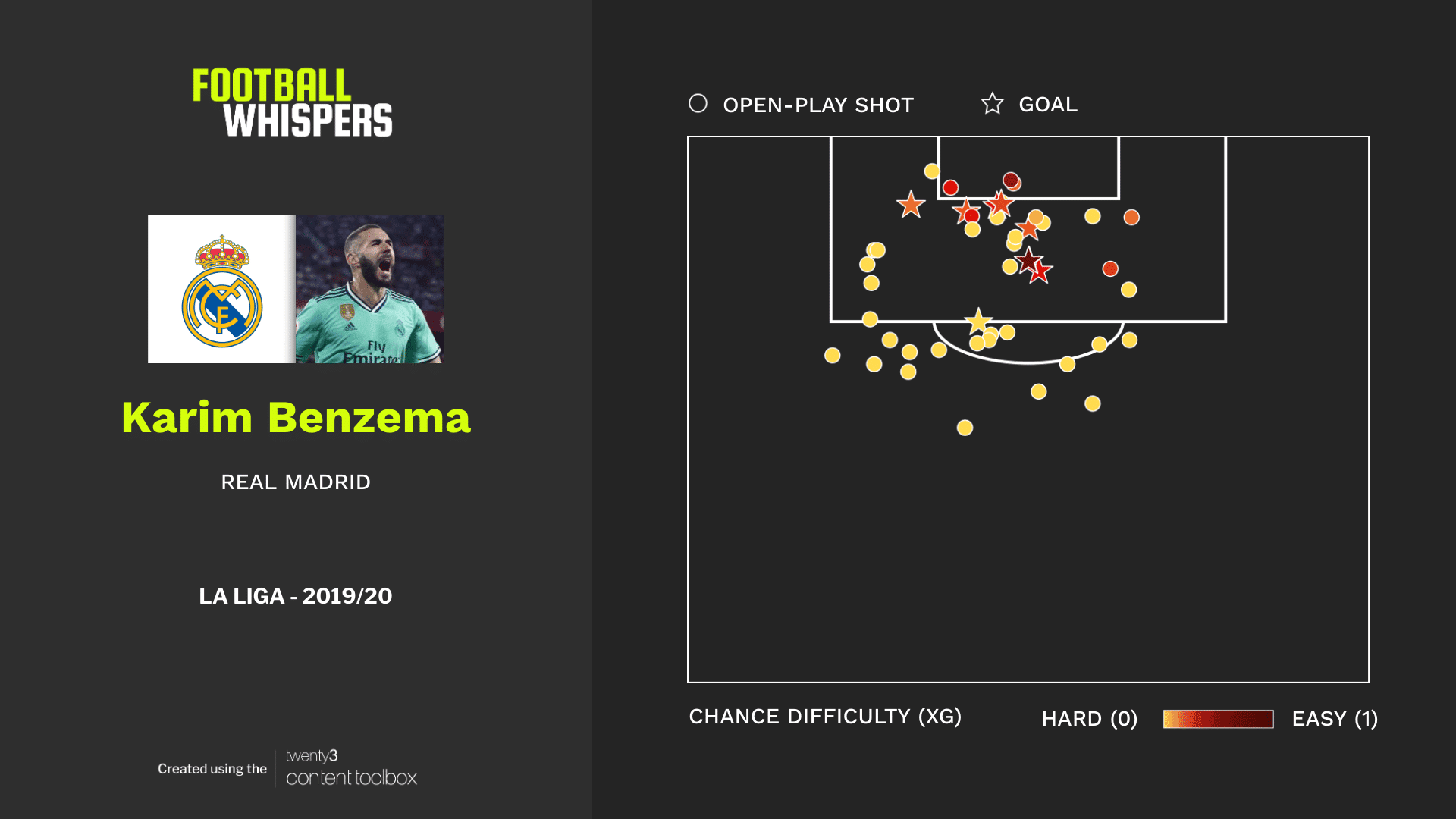 He has struck ten goals in LaLiga – nobody has more – in 12 matches. And these are not mere window dressing; they are openers or winners. Benzema is the difference-maker.

That is reflected in the record books, too. This season he has become only the second player to score in 15 consecutive Champions League campaigns, the first was Lionel Messi. And he also overtook legendary striker Alfredo di Stefano in the all-time list of goalscorers in Europe for Los Blancos.

So how as Benzema's game changed in the post-Ronaldo era? Well, quite simply, he is doing the things a striker should.

He was, as we know, a creator first and goalscorer second.

This term, however, those numbers have flipped. Benzema is now taking 4.44 shots per 90, the second-most of any LaLiga attacker. He is scoring 0.78 Big Chances per 90, again the second-most. He's playing fewer passes in the final third per 90 (17.67) and his open-play assists per 90 have dipped to 0.35.

It's hard to shake the sense that Benzema was always capable of this. That he was an elite-level striker caged in favour of CR7 and team unity.

Of course, his partnership with Ronaldo paid off – together they won four Champions Leagues, two LaLiga titles, two Copa del Reys, three UEFA Super Cups, and four FIFA Club World Cups – but he wasn't and could never be the star alongside the Portuguese.

That has now changed. Finally in the Bernabéu spotlight, Benzema has proven himself a leading man.