As the ball trickled out of play, César Azpilicueta turned and shook his head. Chelsea had worked possession neatly against Crystal Palace and the Spaniard was free down the right flank. All that was needed was the right pass.

Unfortunately, N'Golo Kanté wasn't able to deliver. In an instant, discussion about his suitability in a more attacking role began between the Sky Sports commentary team of Martin Tyler and Alan Smith.

And it's a fair debate.

Kanté's talent isn't in question. In the previous three seasons, he has won the Premier League with two different clubs – Leicester City and Chelsea – and the World Cup with France.

Yet each of those triumphs came with the Frenchman playing a more defensive role. Kanté would chase and harass, tackle and intercept. He was the ultimate midfield destroyer. 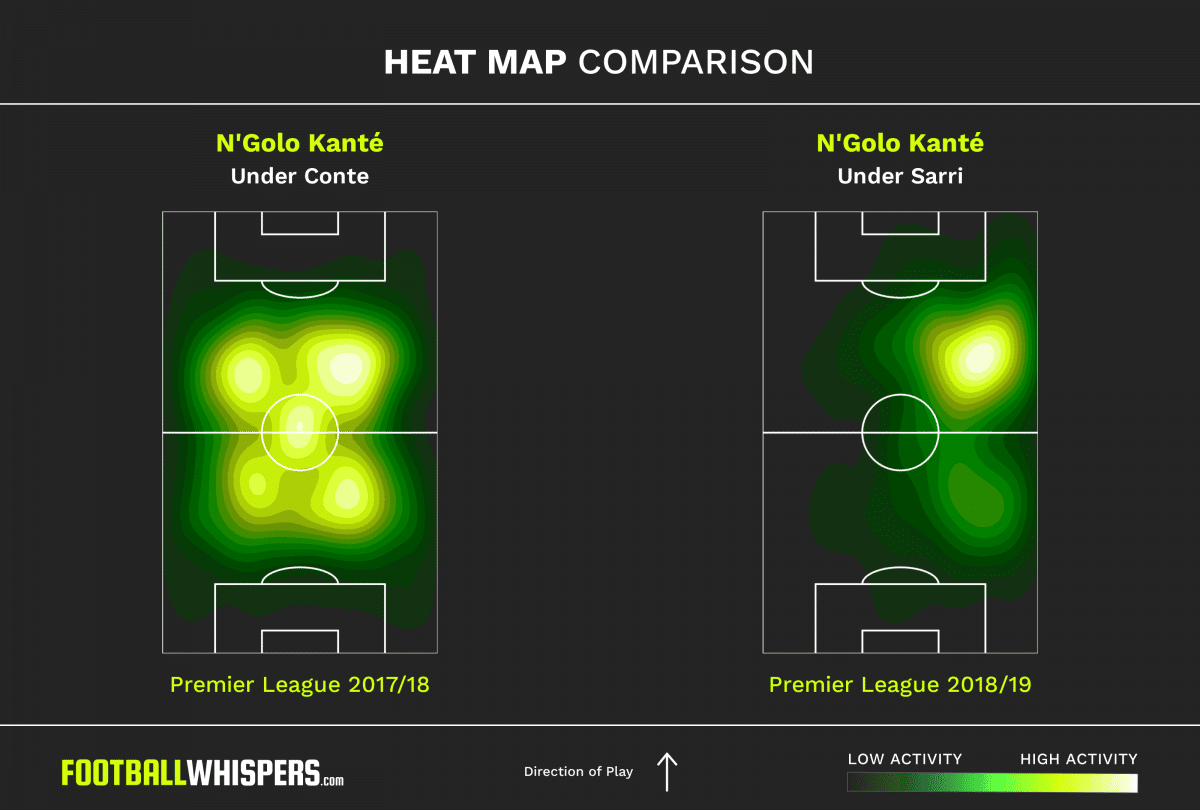 But Maurizio Sarri has utilised the 27-year-old very differently since his arrival in the summer. No longer deployed in an energetic midfield two, Kanté has been played on the right of a three and has been given increased attacking responsibility.

“I am enjoying the role,” the France star said at the end of September. “It is a new challenge for me. I try to understand the moves and the right combinations.”

Kanté is a willing worker. He won't grumble about his change of role and will strive to improve. However, the difference between the 27-year-old and his other midfield colleagues – namely Jorginho, Mateo Kovačić and Ross Barkley – when Chelsea have the ball is stark. 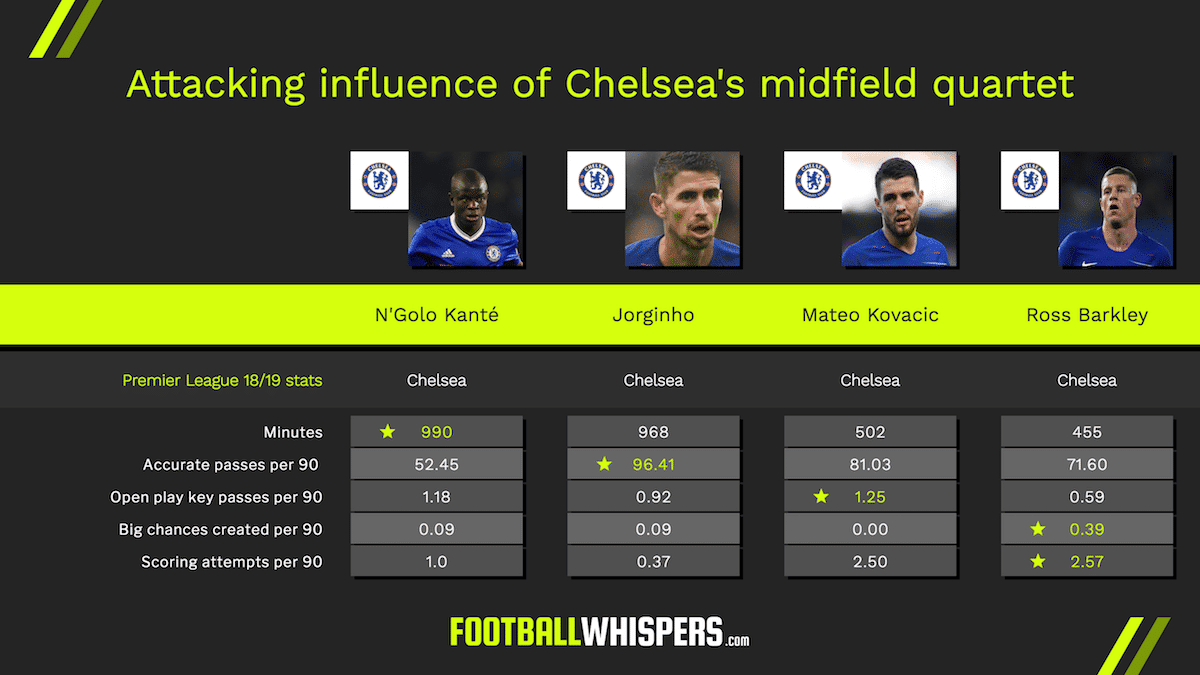 The above graphic looks at the quartet's influence in attack and what immediately stands out is that when Chelsea are in possession, Kanté's influence is far less than that of his teammates.

That is reflected by not only the accurate passes per 90 but by the fact that of Chelsea's passages of possession this term in the Premier League, Kanté is involved in just 8.1 per cent of them compared to Jorginho (11.4 per cent), Kovačić (9.8 per cent) and Barkley (9.2 per cent).

And while his open play key passes are higher than that of Jorginho and Barkley – which shows he can threaten an opposition defence – the former's role is to conduct rather than create while the England international has fashioned more big chances.

So it's fairly clear Kanté isn't as effective when Chelsea have the ball as his midfield peers at Stamford Bridge. So why does he continue to feature in the starting XI under Sarri?

Quite simply, because he is Kanté.

Even in his more advanced role, Kanté still has a telling impact when Chelsea don't have the ball.

Chelsea have conceded a sizeable number of big chances this term (16), far more than their title rivals Liverpool (9) and Manchester City (5). And the vulnerability in front of their defence was exposed by Crystal Palace last time out, with Jorginho outmanoeuvred in midfield for Andros Townsend's equaliser.

Without Kanté plugging gaps, the Blues backline would come under even greater pressure. And that is perhaps the crux of the issue.

When it comes to breaking up opposition attacks, there isn't another player in world football as good as Kanté. And if you don't take our word on that, perhaps listen to Barcelona and Spain legend Andrés Iniesta.

“He's a player I'd like to have had in my team for many years,” Iniesta told RMC Sport.

“He's a player I love because of the work he does on the field and the confidence he has in his game. His mastery makes him the centrepiece of Chelsea and the France national team.”

Yet this season that hasn't been the case. Jorginho is now the centrepiece of the Chelsea side as the Italian is able to control the Blues' possession and, as a result, the tempo of the game. It's what Sarri wants from his midfield pivot and he isn't going to change that belief.

However, the Chelsea boss isn't blind to the problems that affect his team and admitted prior the victory over Palace the defensive issues within his side are “dangerous”.

He added: “The defensive line is only a result of the defensive phase of the team, so it's important to improve as a team defensively.”

One solution to that could be to allow Kanté to do what he does best; be a midfield destroyer. It would be a bold step from Sarri and could even perhaps mean a change in shape. Yet the Italian tactician is smart enough to make it work.

If the Italian is wedded to his 4-3-3 system – and he has plenty of reason to be given the Blue are unbeaten in all competitions – then he has a difficult decision to make about the France star.

Perhaps the compromise could be this; against elite level opposition Kanté, because of the defensive work he'll get through, starts every time; against perceived weaker opponents, those who'll camp on the edge of their area and defence, he's on the bench until a victory needs seeing out.