It’s easy to forget Harry Kane is just 24 years old. In the space of four seasons at Tottenham Hotspur, the Englishman has gone from being a relative unknown to being actively desired by Real Madrid supporters.

Along the way, he scored 100 Premier League goals faster than anyone except Alan Shearer, in a footballing context that is – in all likelihood – much harder. And the scariest part is that he’s still improving.

Last season crystallised Kane’s position as an elite goalscorer. He netted 29 times in the league – four of which were penalties – and claimed the Golden Boot in the process for the second year running as Tottenham finished in second place.

He was also the top goalscorer in Europe for the calendar year of 2017, beating out the likes of Lionel Messi and Cristiano Ronaldo.

Kane’s goal-scoring last season was fuelled at the margins by exceptional finishing: from chances worth roughly 13 expected goals (only the 7th highest in the league according to our model) based on the location of the shot and match context, he generated 18 post-shot expected goals through the placement of his shots on the goal-mouth.

In effect, while Tottenham were not as proficient an attacking side as, say, Leo Messi’s Barcelona or Cristiano Ronaldo’s Real Madrid, Kane was keeping up with their scoring feats largely through excellent finishing.

Generally, elite players will naturally overachieve what expected goals models might expect, but even they are prone to the whims of finishing streakiness, as Ronaldo’s contrasting halves of this season can attest.

To keep up with the elite sustainably, Kane needed to increase the volume of the chances he was getting. Although finishing is important, especially in terms of the fine margins between the Golden Boot and second place, chance-getting is a much more important determinant of goalscoring over the long-run.

This campaign, he has done exactly that. Kane is taking shots worth 0.77 expected goals every 90 minutes, a sizeable increase from 0.45 last season, and a higher rate than anyone else in the Premier League.

In short, he has gone from being very good at getting shots to being a straight-up monster. Although he is playing slightly less passes, and so may seem to be less involved, he is getting 1.37 more touches in the opposition box per 90. 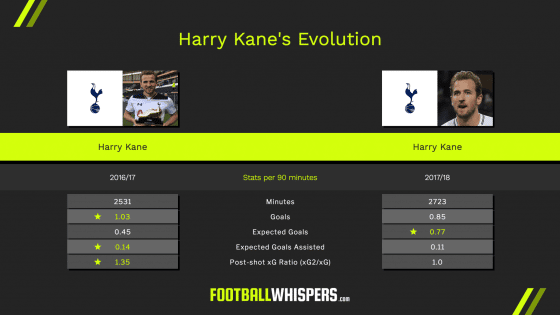 Kane’s finishing has actually been slightly worse than last season, with this effect largely being offset by the improvement in the amount of chances he is getting.

Where he was adding 35 per cent to the chance of a shot going in with the placement of his shot last season, this time around he is bang on expectation.

We can reasonably expect this to climb back to his higher historical rate over time, and so Spurs fans shouldn’t be worried. If he manages to hold onto this level of chance-getting and start finishing ruthlessly again, he may well find himself in Ballon d’Or territory.

Of course, Kane’s improved underlying output is also down to his team-mates. His shooting is near-impossible to separate from Tottenham’s creating. In volume terms, they are performing almost identically to last season, generating 1.66 expected goals per game versus 1.64 last season, third best in the league in both.

However, they do seem to be more concentrated on creating opportunities for Kane specifically.

For example, while Dele Alli’s expected goal contribution (xG + xG assisted) per 90 minutes is almost exactly the same overall as last season, he is creating more and shooting less. In general, it’s the same players assisting Kane’s shots, but they’re all doing it more. 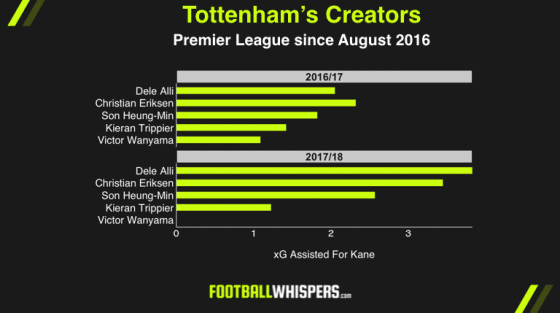 It seems logical that Spurs have focused on facilitating Kane as much as possible given that Tottenham’s attack is markedly more focused on him than other Premier League teams are on their star forward.

Of all players in the competition, he is the most involved in the chances that his team has. 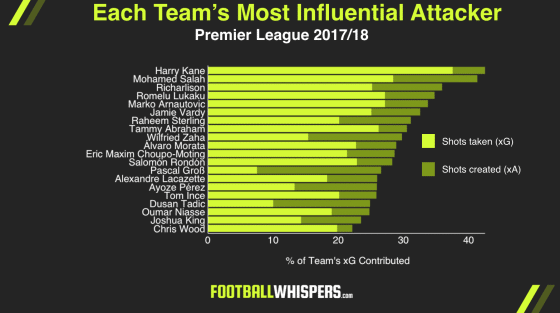 Kane is continuing to develop, improving his knack for getting chances to go with his demonstrable ability to take them, and it is difficult to gauge quite where his ceiling is.

According to age-curve research from Michael Caley, “a player’s skill at getting quality shots peaks around 26-27 years old”. Strikers often end up actually taking less shots as they age, but get more selective in the shots that they take.

Indeed, although Kane is shooting more than last season in volume terms, he is also getting better chances generally: his average xG per shot is 0.15 this season versus 0.13 last time around.

There will be new challenges to traverse across his career, such as an ageing body or injuries, but the terrifying truth is that neither of those possibilities seem to be on the immediate horizon for Tottenham’s talismanic striker.

As Russia steadfastly approaches, England find themselves with a frontman with a genuine claim to being the best striker in the world. By the time Qatar rolls around, he may very well be the best player in the world full-stop.