This weekend could prove hugely significant in Serie A, with a fixture at the Stadio Olimpico potentially having huge ramifications on the remainder of the campaign. Over the past few weeks, Juventus have strengthened their grip on top spot, but behind them AS Roma and Napoli have both delivered eye-catching performances as their respective front lines have torn through defences.

Forced to find a solution after Gonzalo Higuain defected, Partenopei boss Maurizio Sarri thought he had the answer as new signing Arkadiusz Milik plundered seven goals in his first nine appearances. After the Polish striker suffered a cruciate ligament injury, Manolo Gabbiadini struggled so badly that he was shipped off to Southampton as Dries Mertens proved to be an incredible solution.

The Belgian international stepped up and has 20 goals in all competitions, his speed and timing making him a fantastic weapon as the focal point of Sarri’s 4-3-3 formation. Thanks to his impact in that role, Napoli boast Italy’s most prolific attack and have found the back of the net on 60 occasions after 26 rounds of action.

Meanwhile, the capital club – whose attack ranks second with 57 goals thus far – have dominated their last four league games, winning them all and outscoring opponents by a 13-2 margin. With the likes of Edin Džeko, Mohamed Salah and Radja Nainggolan in devastating form, Luciano Spalletti’s side have proven to be a match for anyone swept Napoli aside 3-1 when the two sides met back in October. 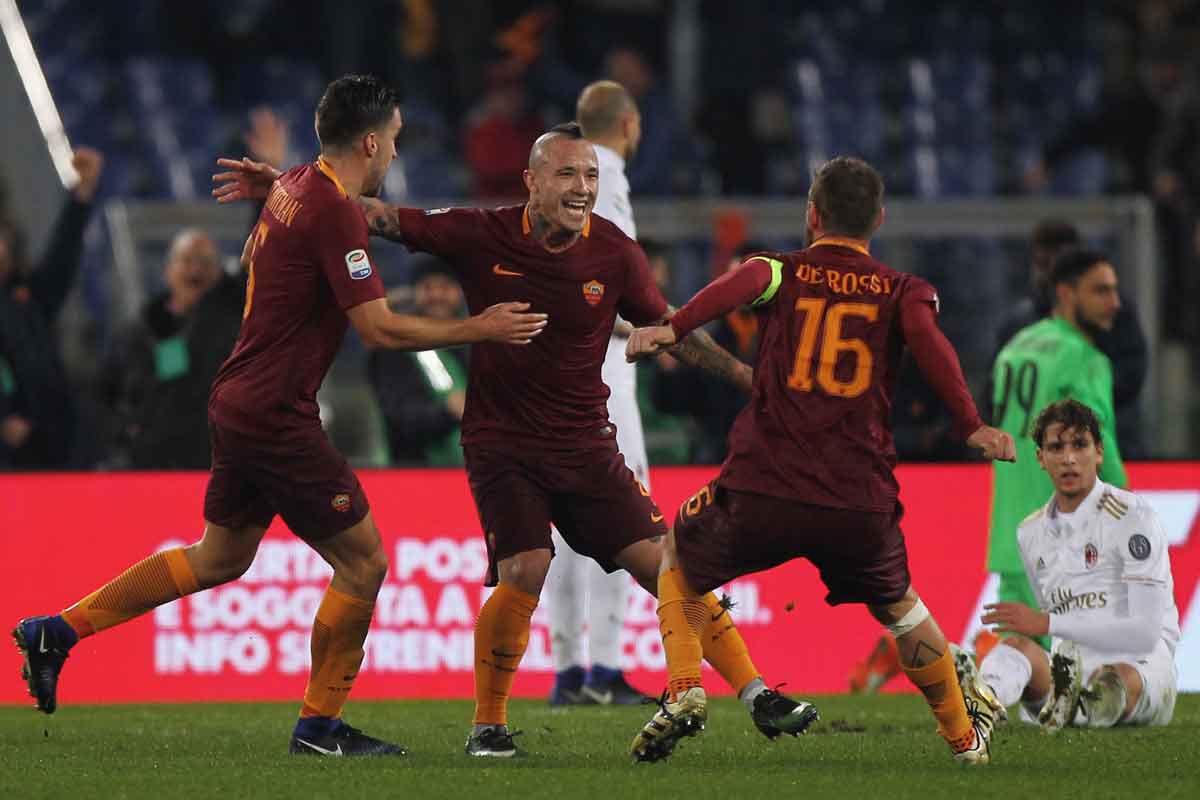 If the visitors in this rematch are to have any hope of success, it is not their forwards who will need to shine, but instead their chances of victory will rest largely on the shoulders of Kalidou Koulibaly. No player has benefited more from the Tuscan Coach’s arrival, a far cry from when he initially joined the club back in May 2014. A £5.1 million signing from Racing Genk, he failed to convince anyone that could be the answer to Napoli’s defensive woes. 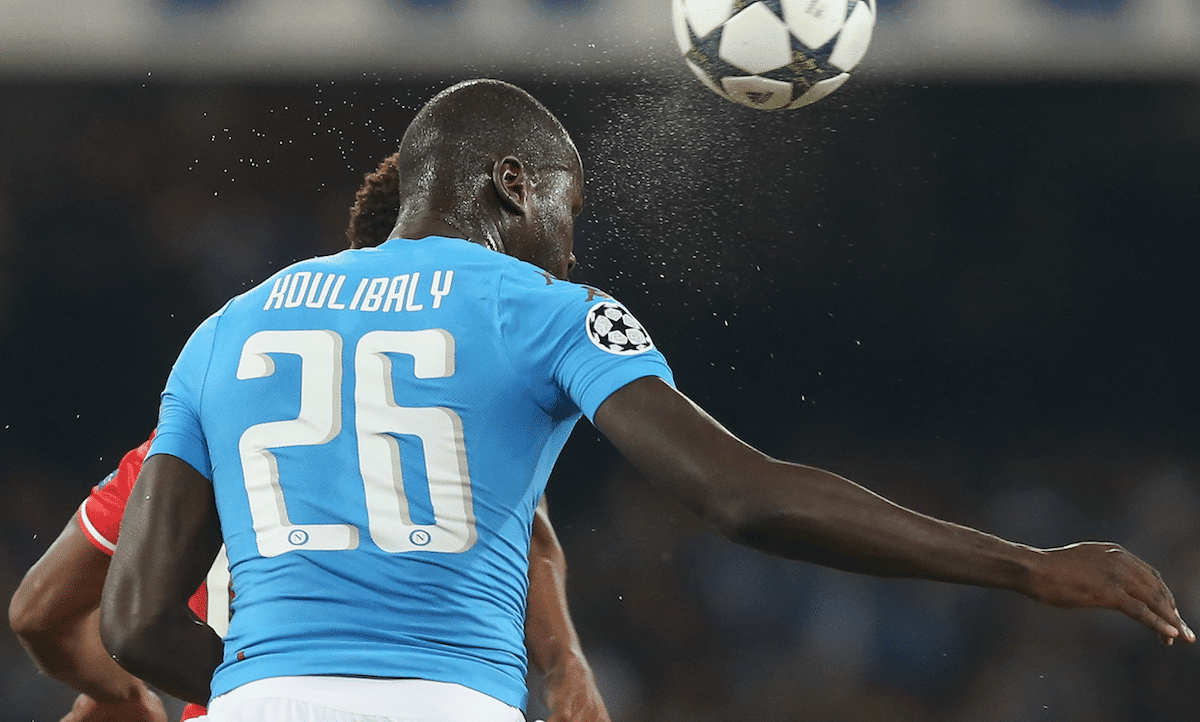 In Rafael Benitez’s final season he looked awkward and ungainly, often caught out of position and seemingly lacking both the focus and tactical awareness that has always been essential for defenders in Serie A. It looked likely that he would be sold before the 2015/16 campaign began, but Sarri believed in him, insisting that he could forge a solid backline from the players already at the club.

Pictures from his summer training camp showed the 58-year-old on the pitch, physically dragging defenders into the right positions during drills and using drones to track their movements. His mixture of old school drill-sergeant scoldings and modern technology seemed to work as every facet of Koulibaly’s game improved dramatically. He suddenly transformed from a player who looked like Bambi on Ice into a towering rock upon which opposition attacks now floundered.

Known as ‘K2', his 6ft 5in frame always lent him an air of physicality, but over the past 18 months he has learned to channel that in the correct manner, blossoming into a well-rounded player that has attracted admiring glances from Europe’s biggest clubs.

He even grabbed the attention of France boss Didier Deschamps, who told Canal+ last year that he’d “been following Kouilibaly,” the Coach seemingly unaware that the defender had already been capped five times by Senegal. Given that the player was born in the Lorraine region to African parents but opted to represent the Lions, it was an honest mistake from Deschamps, but it seems Koulibaly could yet wear blue in the future.

Just last week, reports in Italy suggested that should they fail to qualify for the Champions League next term, Napoli could accept a €60 million bid from Chelsea for the 25-year-old. He signed a new contract back in September and the deal – which runs until June 2021 – contains no buyout clause but pays him just €1.6 million per season, a figure the Premier League side would at least double if they were to enter negotiations.

On the field, he has averaged two tackles, 2.1 interceptions and 3.7 clearances per game this term according to WhoScored.com, with Sky Italia pundit Zvonimir Boban among those to be impressed by his performances. “Koulibaly’s improvement isn't notable, it’s extreme,” the former AC Milan midfielder noted last year. “For me, he's among the best in the world and he can still improve. He's matured in everything; character, technique… he now comes out with the ball in such an impeccable way and is always physically dominant. I think Napoli have uncovered a champion.”

There is little doubt that his distribution skills have take a drastic leap forward. Having averaged just under 55 attempts per game in 2014/15, he has been successful with an impressive 89.7% of his 67.2 passes this season. That latter figure sees him rank fifth in Serie A this term, team-mates Jorginho, Marek Hamsik and Raul Albiol ahead of him, while Juve’s Leonardo Bonucci – a defender rightly lauded for his passing – ranks two places lower.

Napoli have struggled much more this term, looking less robust at the back and now sit just three points ahead of fourth-place. A loss to Roma could place their hopes of Champions League qualification in doubt, but may also lead to their star defender moving on, because Kalidou Koulibaly has undoubtedly proven he is worthy of the very best competition.