It wasn’t too long ago that Kalidou Koulibaly was acknowledged by many as Virgil van Dijk’s peer.

When Napoli met Liverpool the Champions League it was the 28-year-old who played a big part in the hosts managing to shackle the reigning European champions on their way to a 2-0 success.

But a lot can change in a short space of time in football.

In the 12 matches since the victory over Jürgen Klopp’s side, Napoli have won just four times. Genk helped themselves to a 0-0 draw in the Champions League while Red Bull Salzburg claimed a point in Naples. With a trip to Anfield still on the horizon, the four-point advantage over the Austrian side doesn’t look quite as secure as it once did.

Domestically, things haven’t been much better for Carlo Ancelotti’s men. Viewed as genuine contenders to Juventus’ crown ahead of the new campaign after strengthening this summer, Napoli currently have 19 points to their name from a possible 36 on offer.

On their way to a second-place finish last term, I Partenopei conceded, on average, 0.94 goals per 90. So far this term, that average has spiked to 1.25. Their poor form means they trail leaders Juventus by 13 points already.

And reports have emerged to suggest Napoli president Aurelio De Laurentiis wants to gut his squad when the transfer window opens. Jose Callejon, Dries Mertens, Allan and Koulibaly are all players named on the hit list.

Tensions are at an all-time high and De Laurentiis, usually a tough negotiator in the transfer market, is prepared to let players leave in cut-price deals.

The Neopolitan club rejected a £91million offer for Koulibaly in the summer from Manchester United, who eventually settled on Harry Maguire. Yet supposedly Napoli now want just £69million for the Senegalese centre-back.

In the current market, that would make the former Genk man a genuine bargain. 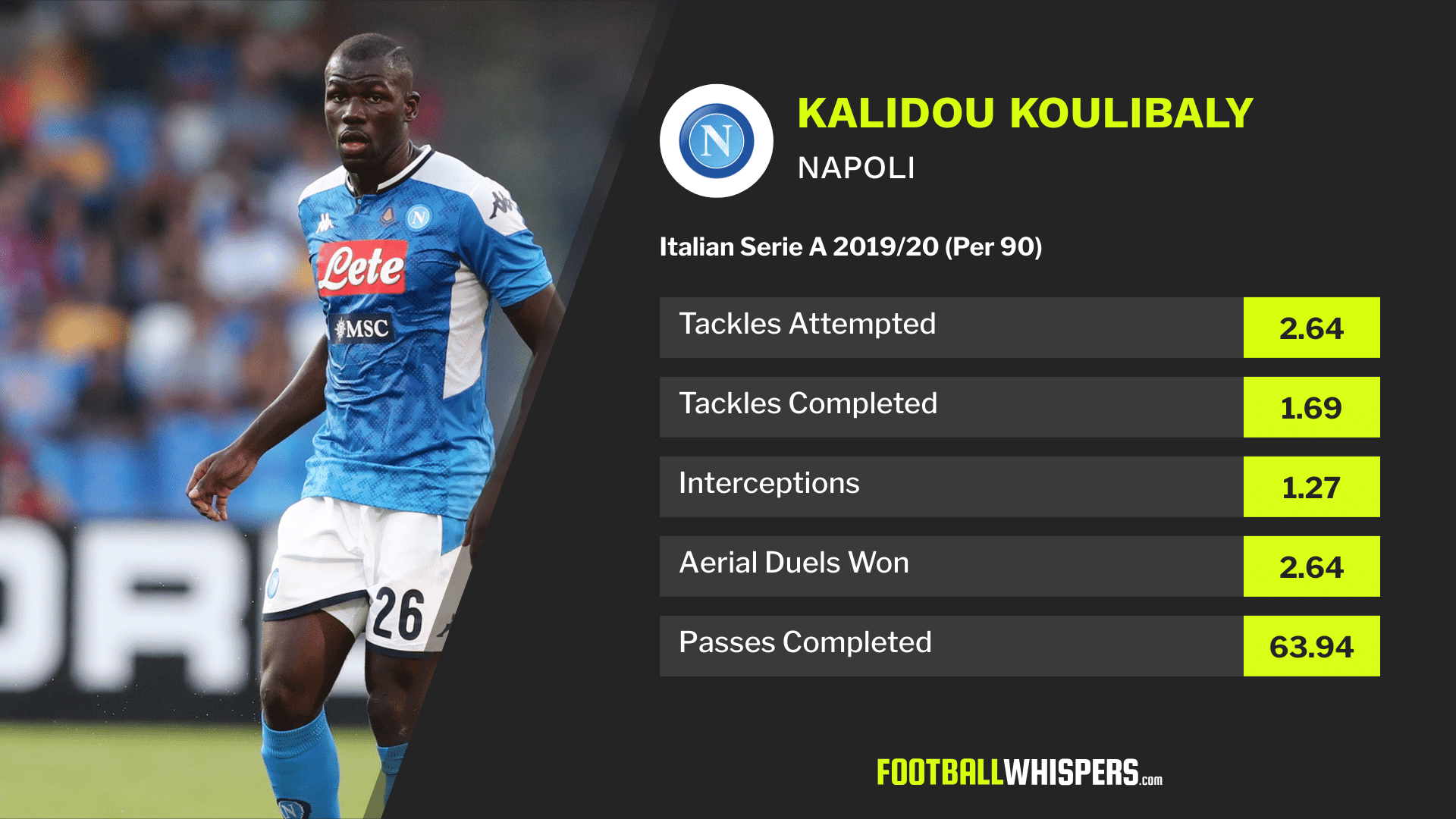 The Red Devils are believed to be still interested in the Napoli No.26 with the idea being to partner him alongside Maguire. It may seem pricey, close to £70million for a player who turns 29 at the end of the current season, but Koulibaly still has four or five years left at the top.

He doesn't rely on pace. Instead, Koulibaly uses his tactical intelligence to read the game well. It helps he's a physical presence and is difficult to beat.

He's dominant in the air, comfortable on the ball and a leader. The latter should be viewed as the biggest selling point. United's defence has been quietly impressive this season, with Ole Gunnar Solskjær's side having the lowest expected goals against total in the Premier League, but Koulibaly would elevate that backline in a similar way to how van Dijk influenced the Liverpool backline.

But United aren't the only club in the market for a defender. Neighbours Manchester City are reportedly eyeing up reinforcements in January as they look to claw back the nine-point lead Liverpool have on them.

They failed to bring in a replacement for Vincent Kompany during the summer and Aymeric Laporte‘s injury highlighted just how threadbare City are in the defensive third. Fernandinho has had to fill in with John Stones and Nicolas Otamendi also struggling for fitness and form.

City have previously been linked with Koulibaly but reports claimed the Premier League champions baulked at his £100million price-tag. The £70million figure represents much better value for money, something City are all about despite their finances.

Unlike United, City won't just throw cash at a problem. They don't just look for names and reputations, either. It's all about the playing profile for Pep Guardiola, and Koulibaly fits the bill.

The Napoli man sees a lot of possession, averaging 85 touches and 63 passes. He isn't in Laporte's league, the Frenchman is averaging over 100 touches and close to 90 passes, but the fact remains, Koulibaly can hold his own in a possession-based team.

The Senegal international seems ideal for City. He's very proactive both in and out of possession and as soon as he regains the ball he's looking to get Napoli on the move. He suffocates opponents almost single-handedly and that fits in with how City smother the opposition.

City may have been trumped to the signings of Fred and Alexis Sánchez – though it did work out well for them in the long run – but this could be their best opportunity to get one back on their neighbours.