Kazakhstan's Kairat have the home advantage in this Champions League 2nd Qualifying Round against Serbia's Crvena Zvezda, better known as Red Star Belgrade. These two sides have met one another on a couple of occasions before and we're expecting a tight and tense 90-minutes in Almaty.

Under 2.5 goals have been produced in two of the four previous meetings between these two clubs and we're backing another low-scoring 90-minutes on Wednesday. Each of Kairat's last four outings have featured fewer than three goals as have three of Red Star Belgrade's last six matches, so you can see just why we're not backing a goal-fest in this Champions League qualifier.

Both teams have scored in just one of the four previous encounters between Kairat and Red Star and we're expecting Wednesday's clash to follow suit. Only two of the host's last six fixtures have ended with both teams getting on the scoreboard and the same can be said for two of Red Star's last six outings as well.

Both of Red Star's two wins against Kairat have been accompanied by clean sheets and we're predicting another win-to-nil for the visitors this Wednesday. Kairat lost their last home game 2-0 against Kasply while Red Star have kept clean sheets in four of their last six matches, winning three of their last five games.

A close and competitive 90-minutes expected at the Ortalıq Stadion

Kairat knocked out Israel's Maccabi Haifa in the last round thanks to a strong performance in their own backyard, so confidence is bound to be high. Wednesday's hosts have won their last two games against Red Star Belgrade but in fairness, that was back in 2015. Kairat head into the 1st leg of this Champions League qualifier as the underdogs but we don't think there is much between these two clubs. However, losing their last home game in the Kazakhstan Cup to Kasply does suggest that the hosts might not be able to handle Red Star's quality.

The visitors enter the qualifiers at this stage and have so far only played friendlies this season. However, Red Star remain unbeaten in their last six matches, picking up three wins and three draws and look very strong at the back. Red Star have kept four clean sheets in their last six attempts and this is one aspect that could prove key to the Serbian club progressing through to the next qualifying round. 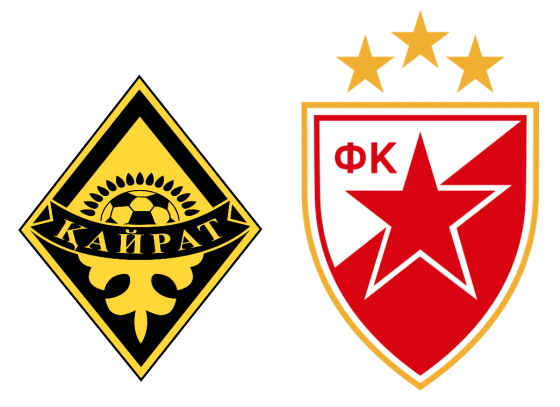