Kairat take on Maccabi Haifa in the second leg of the UEFA Champions League qualifier between the two clubs. The first leg finished as a 1-1 draw with Kairat cancelling out an early goal from Maccabi Haifa.

Kairat picked up a 1-0 victory over Zhetysu during the weekend. Andrey Ulshin came up with the only goal in the first half to keep Kirill Keker's team in a confident run. Maccabi Haifa did not have any action since the first leg. The top tips for this match would be:

Maccabi Haifa have had two weeks to prepare for this encounter. They have greater experience coming into the game. Even though Kairat are quite strong in the home matches with four consecutive victories, the level of competition in the Champions League is on a different scale. In the first leg, Maccabi Haifa were able to dominate the stats with more than 60% possession. They might be playing away from home, but Barak Bakhar’s men are in a good spot.

Kairat do have a threat when it comes to home matches with the team unbeaten on this ground in 2021. This record covers every competitive match for the team. A major part of this positive record is down to the team scoring with ease. Maccabi Haifa were able to dominate the first leg without scoring too many goals and there is not much change expected in this trend for the return leg.

A high-scoring game with more than 2.5 goals

Maccabi Haifa are preparing to travel in the Champions League for the first time since 2011, but the team’s scoring record in recent weeks has been quite good. Kairat have been able to get over 3.5 goals in three out of the last four games at home.

Top Betting Odds and Stats for Kairat vs Maccabi Haifa

Kairat did well to sneak out a draw against Maccabi Haifa in the first leg, but the Kazakhstan outfit may struggle in the return leg even when playing at home. The team should have some level of nervousness, as they do not have great experience in this stage of the Champions League. Despite positive domestic results, manager Keker is likely to feel the absence of players like Jacek Goralski, who is injured.

Maccabi Haifa have been Israeli champions for a while and the team possess a ton of experience when it comes to the Champions League or European competitions. Bakhar has transformed the Israeli outfit into a winning machine with the team losing just one of the last 16 matches. Ofri Afad is ruled out of the game, while Neta Lavi is doubtful.

Questions about Kairat vs Maccabi Haifa 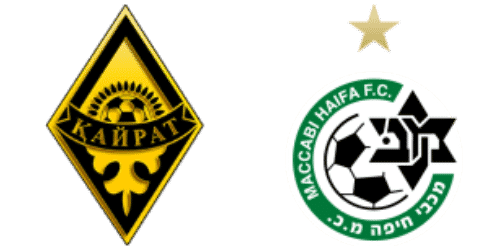 Where is the match scheduled? Ortalıq Stadion

Which team is the favourite to win? Kairat