Goalscoring midfielders used to be all the rage. Liverpool had Steven Gerrard, Chelsea had Frank Lampard, Bayern Munich had Michael Ballack and Bolton Wanderers had Kevin Nolan.

Then they went out of fashion. Replaced by playmakers in the final third, the wide forwards were now tasked with finding the back of the net. The shift coincided with more managers adopting more of a 4-3-3 shape as opposed to the 4-2-3-1 system that was very much en vogue.

But, like with all cycles in football, the goalscoring midfielder is making a return.

Aaron Ramsey's exploits in front of goal for Arsenal kickstarted it. Dele Alli soon joined him, plundering 28 Premier League goals over the space of two seasons for Spurs. Others got in on the act of being a goalscoring attacking midfielder with James Maddison all joining in.

Joining the club is Bayer Leverkusen's Kai Havertz. And he might just be the best of the bunch.

The 19-year-old had an incredible 2018/19 campaign, netting 17 goals in the Bundesliga. He added a further three goals in the Europa League, too. His total of 20 meant he'd quintupled what the Germany international managed during the 2017/18 season.

It's even more impressive when you consider his role has been tweaked this season. Instead of operating in a wide area, he's been used centrally and at times almost as a centre-midfielder alongside Julian Brant.

His seven goals in the final seven matches of the season helped Die Werkself sneak into the Champions League. Despite his young age, he's an invaluable part of Peter Bosz's team. 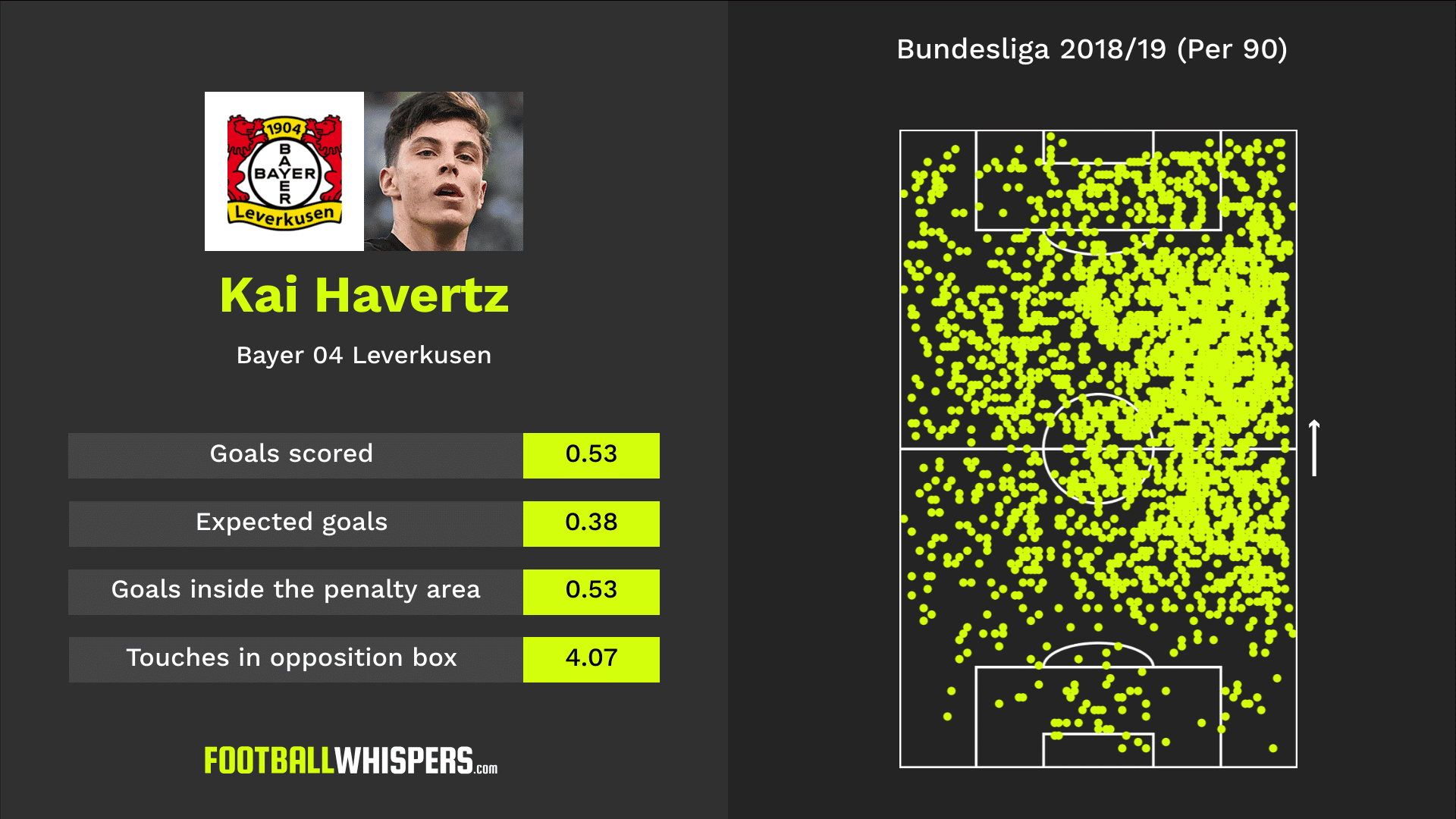 Of players with over 1,500 minutes in the Bundesliga last season, Havertz's return of 0.53 goals per 90 can only be bettered by ten players.

His expected goals tally of 0.38 puts him in the top three when looking at midfielders in Germany showing his goalscoring form is sustainable, perhaps just not to the extent he managed this season.

The 4.07 touches in the opposition's box isn't anything remarkable, ranking him 13th of midfielders in the Bundesliga, but it does help to highlight just how lethal he is.

He's not even in the top 10 for this metric yet he's first for goals inside the penalty area. In fact, all of his strikes in the league this season have come inside the box.

It highlights his mentality as a player, he's ruthless and has the desire to put the ball into the back of the net, and this goes a long way to explain why he's been so productive for Bayer Leverkusen this term.

Most of his finishes are instinctive and he simply takes the opportunities that come his way. He runs beyond the strikers. He times his runs into the box to perfection. He finds space. He creates space.

Havertz just seems to be able to do it all. 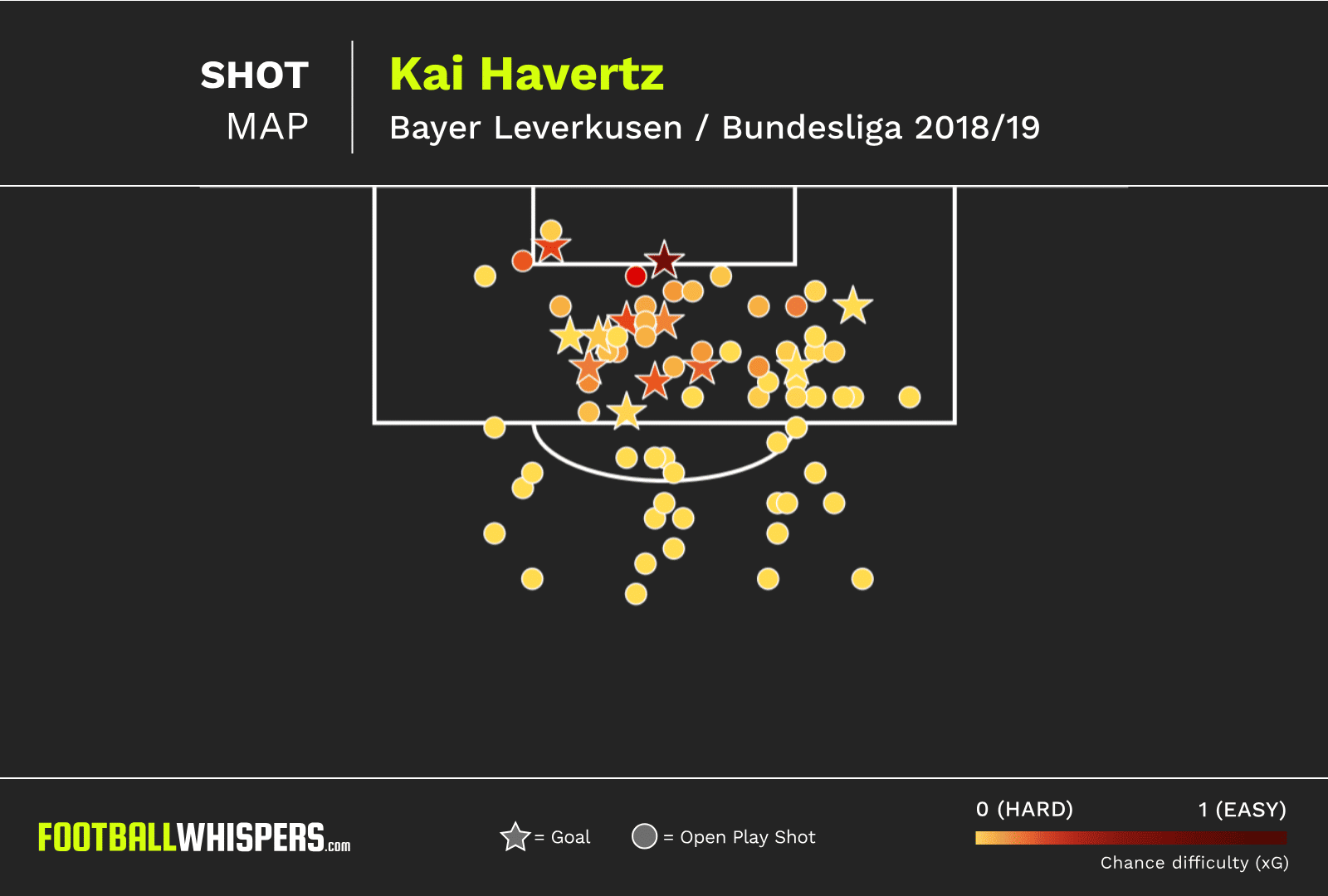 His shot map suggests his output is sustainable, too.

He takes very few shots from outside of the area, showing he's an intelligent player and, as basic as it sounds, he knows getting the ball into the area increases the likelihood of a goal.

He isn't taking pot-shots from 30-yards like other, more experienced players perhaps are. He's lethal. He's clinical. He's a stone cold goalscorer. And Bayer Leverkusen are going to have a task on their hands keeping hold of him.