Álvaro Morata hasn’t had the most enjoyable debut season with Chelsea.

The Spaniard, who cost a club record £60million, has struggled to impose himself and has lost his place in Antonio Conte’s starting XI since the January arrival of Olivier Giroud.

Despite the lukewarm performances, Juventus are keen to bring the striker back to Turin and, according to reports, are prepared to put together package worth £55million to tempt the 2016/17 Premier League champions into parting with their No.9.

Morata thrived for the Serie A giants between 2014-16, playing a pivotal role as the Italian side made it all the way to the 2015 Champions League final. His spell in Turin yielded 27 goals in 93 appearances and his form convinced Real Madrid to activate the €30million buy-back clause in his deal.

According to Tuttosport, Roman Abramovich is prepared to make a loss on the Spain international and reports in England suggest Juventus want to loan the forward, paying £15million for his services now, before making it a permanent move in a deal worth £40million during the summer of 2019.

While the Chelsea forward might feel at home in the Juventus stadium, Serie A's dominant force doesn't have to go out and spend over £50million on him.

They already have a striker on their books who, with a little bit of refining, could do everything Morata does and then some.

Is it time to give Moise Kean a chance?

In terms of quality, it's hard to compare the two forwards. One is a two-time La Liga, Serie A and Champions League winner while the other is an 18-year-old with a little over 1,100 minutes of senior first team football to his name.

But there are a few things to consider. One of which being the fact Juventus aren't in desperate need for a world class striker. Allegri has Gonzalo Higuain and Paulo Dybala at his disposal and the Argentine duo have 38 Serie A goals between them this season.

Higuain still has years left in the tank and Dybala is still just 24. The latter has been named as a Real Madrid and Barcelona transfer target in the past but those reports have disappeared. On the surface it appears as though Juventus are in no danger of losing either of their prolific front men, so is a striker, who wouldn't be content with a place on the bench, really necessary?

Especially when, in Kean, Juventus already have a striker who is, stylistically at least, similar to the Chelsea hit man? 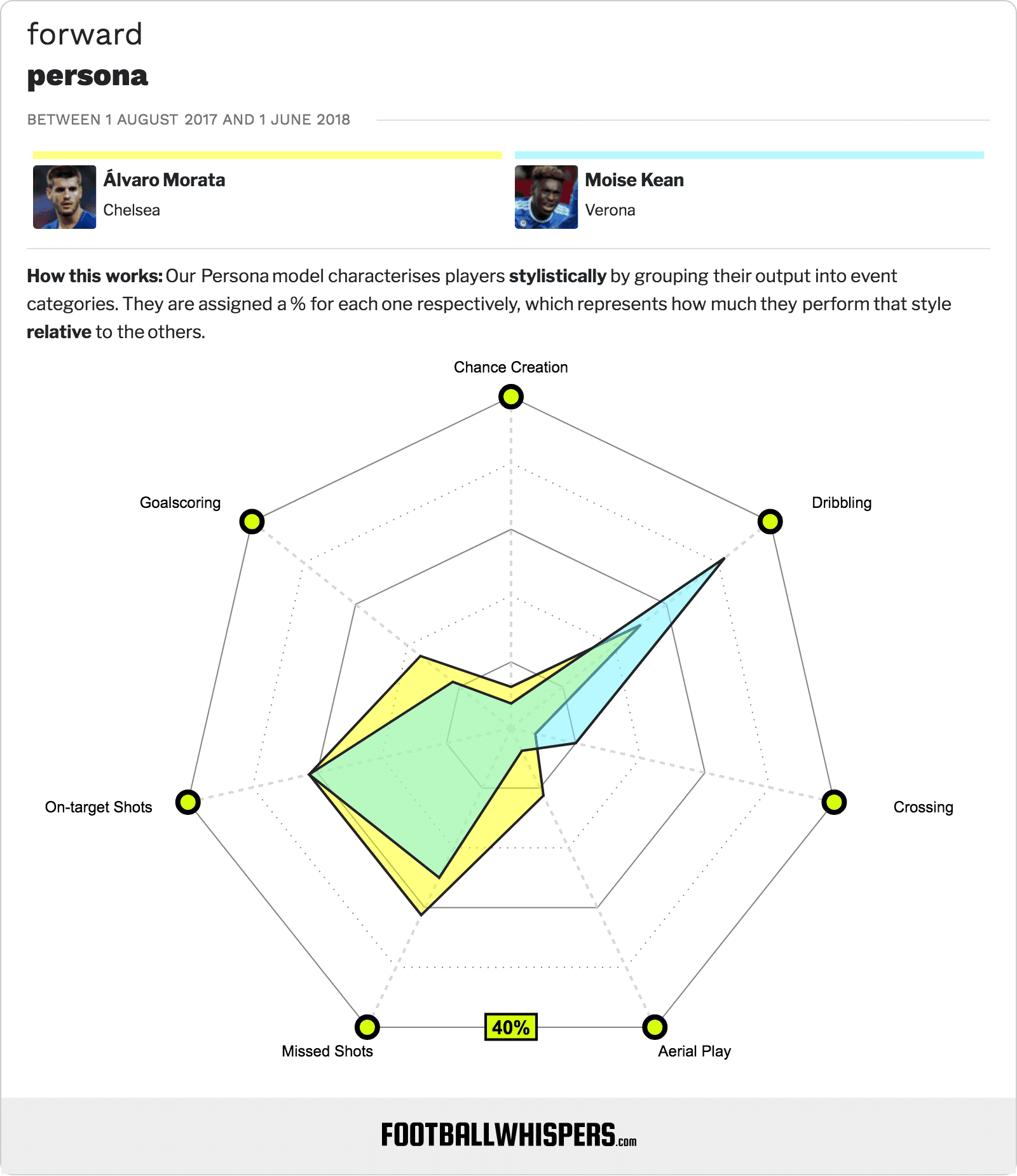 The persona radar above, exclusive to Football Whispers, looks at the style of players by grouping data into event categories. As shown in the graphic, Morata and Kean aren't too dissimilar.

The latter is more of a dribbler and looks to put crosses into the area on a more regular basis, while the former is aerially dominant, but, aside from those three areas of play, there isn't much in it.

Morata is a threat in the air but Kean's movement in the penalty area makes up for his lack of height – he's 5ft 10ins. A team would still be able to play a crossing game with the 19-year-old spearheading the attack.

What's even more interesting is how similar the stats for the two forwards are, despite the fact Kean is playing for Verona who sit in 19th position in Serie A. 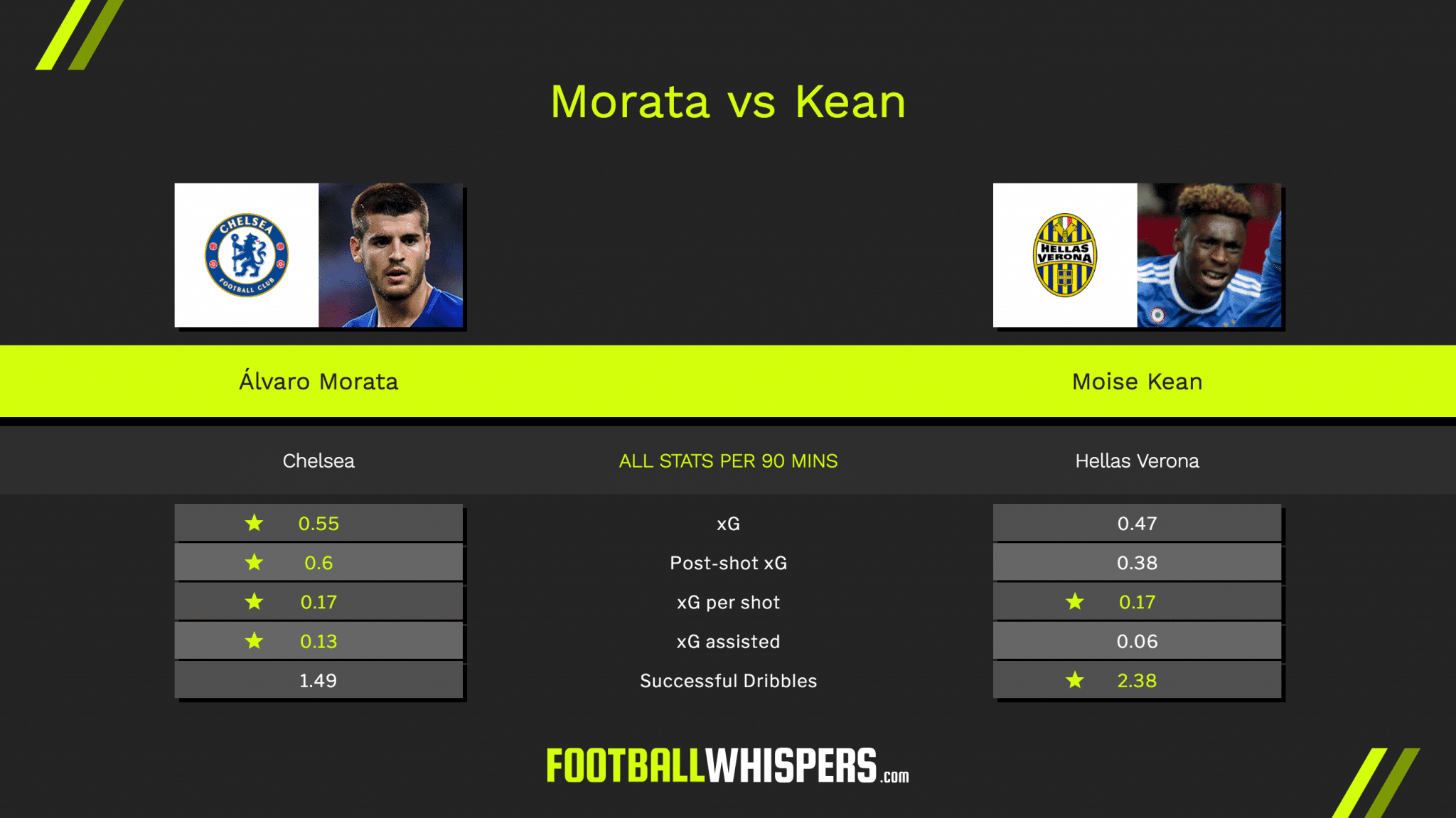 The graphic above looks at goalscoring data. Expected goals (xG) gives a value to the shots being taken by looking at where the player is when they have an effort. It's a way to show which players are regularly getting into high quality positions – and there's only a 0.08 difference between the two. It's safe to assume Kean's number would rise if he was playing in a better team.

Post-shot xG looks at where the shots land on the target and gives a value to it. It helps identity which players are adding quality to their shots with their placement and which players aren't. The fact Morata's post-shot number is higher than his xG90 shows he's adding value whereas Kean finishing ability needs work, but that's expected at the age he's at.

The next stat, xG per shot, gives a number to each shot the player has. Interestingly enough, both Kean and Morata are, on average, needing close to six shots to get to one xG. It implies both of them are poachers – they only take high quality shots rather than shooting from range.

Morata creates more opportunities for his team-mates, as highlighted by the xG assisted stat while Kean completes more dribbles, showing he's more of an all-round forward as opposed to a target man.

The on-loan Verona man is nowhere near the finished article just yet but everything points towards him being a good fit for Juventus and, if no forwards are being sold, makes more sense than Morata. It could be the smartest thing the transfer savvy club have ever done in the market.