Perhaps one of the most impressive aspects of Juventus’ recent history has been their transfer business. The Bianconeri have maintained their supremacy in Italian football thanks to a succession of productive transfer windows that have brought the likes of Andrea Pirlo, Dani Alves and Gonzalo Higuaín to the club.

A clear, focused transfer policy has once again elevated them above the rest in Serie A this season. After winning the Scudetto last season, Massimiliano Allegri bolstered his squad with a raft of exciting acquisitions – Higuaín and Alves chief among them – to tighten their grip at the Serie A summit.

Next season will be no different. The Turin giants will be expected to fend off Roma and Napoli’s challenge and extend their reign to seven years (assuming they don’t fall to a late-season catastrophe and surrender the crown this season).

In order to do that, Juventus will need to add further quality to their first-team, and recent reports have linked them to Barcelona’s Rafinha Alcântara.

Why is he being linked with Juve?

Despite his burgeoning talent, Rafinga has struggled to establish himself in Barcelona's first-team. That’s not necessarily an unflattering reflection of his lack of quality or progress, though, more a reminder that usurping icons like Andrés Iniesta is a near-impossible task.

The 24-year-old, who rose through Barça’s fabled La Masia academy, is at an interesting point in his career. Thiago, his elder brother by two years, had already impressed enough at the Camp Nou by this stage to earn a move to Bayern Munich and link up with Pep Guardiola, who rated him as one of the finest attacking midfielders in Europe.

Rafinha’s trajectory has been less stratospheric. After graduating from Barça’s B team in 2013, the Brazilian failed to make a league appearance for the senior side in the next two seasons.

For the 2013/14 campaign, he was sent on loan to Celta Vigo. It proved to be fruitful for the budding playmaker, who got plenty of first-team minutes under his belt and was voted LaLiga’s Breakthrough Player of the Season.

He has shown flickers of true promise since then under Luis Enrique without ever nailing down a regular starting place. Now, with Rafinha determined to make Brazil’s 2018 World Cup squad, a move to Juventus – which has reinvigorated the career of his former teammate Alves – could stand him in good stead come next summer. 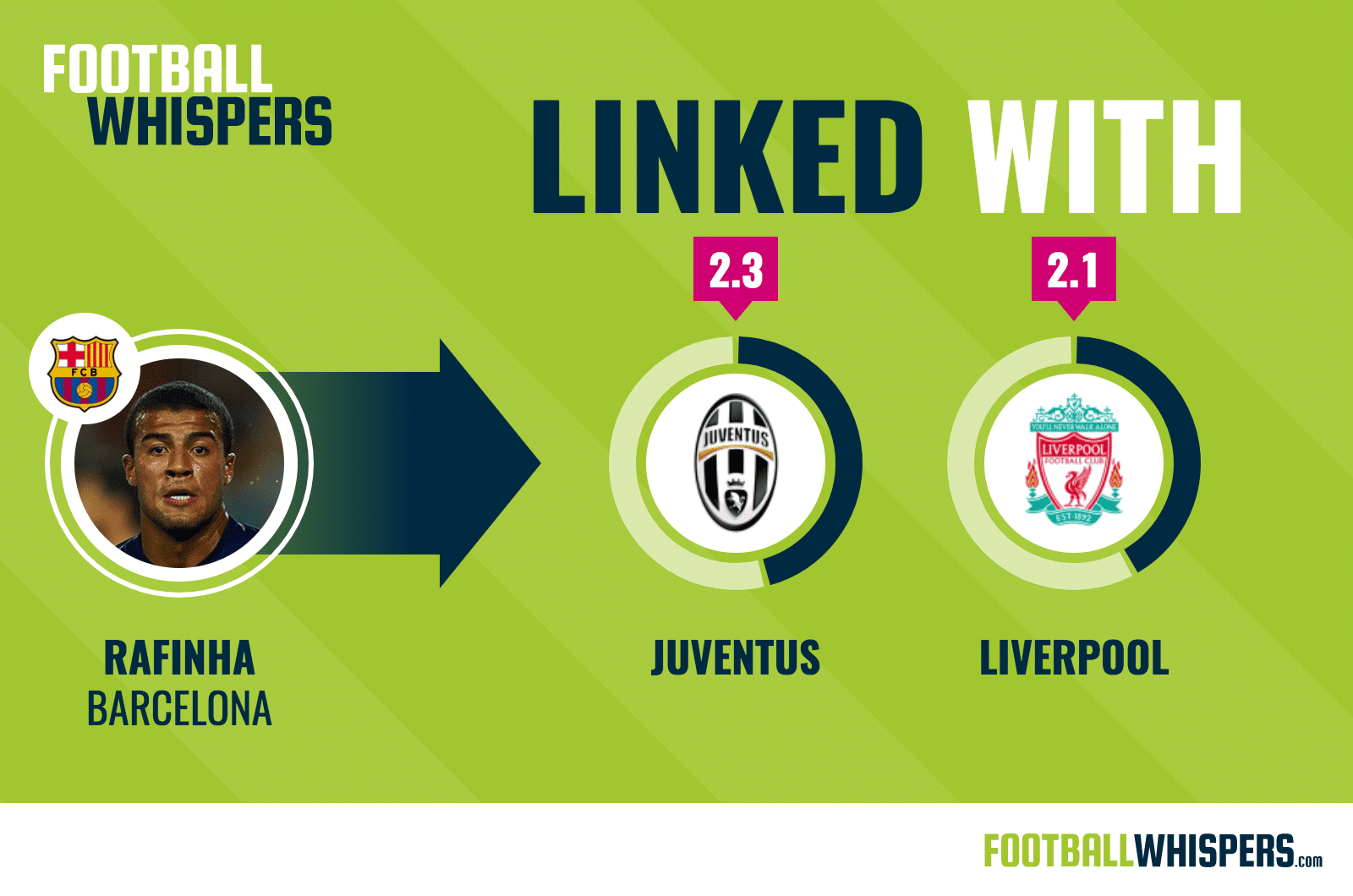 His father Mazinho, a former World Cup winner with Brazil who also serves as his agent, has vehemently refuted reports that the player is set for a move to Turin but things can change instantly during the transfer window.

How would he fit in at Juventus?

Rafinha’s versatility makes him an attractive proposition for Allegri, who has shown a sense of tactical flexibility this season in using an experimental 4-2-3-1, a 3-4-2-1 and Juve’s signature 3-5-2.

The Brazilian’s natural position is as an attacking midfielder, meaning Allegri could deploy him alongside Paulo Dybala, Juve’s attacking jewel with seemingly endless potential, in a 3-4-2-1 as the creative partnership to feed Higuain.

Operating in such a role would suit Rafinha’s craft and invention, which he has shown several times this season. On top of two assists and 14 chances created, he’s notched seven goals, proving himself as a fine finisher benefitting from a willingness to run beyond defenders and sense scoring opportunities.

This was evident during Barcelona’s 1-0 win over Granada in September when Rafinha followed in when Neymar struck the post from close-range to acrobatically convert a bicycle kick.

As a snapshot, it was telling: Rafinha had the presence of mind to take up a central position, six yards out, in case his compatriot missed. Not only that, but he showed exquisite technique to hook the ball over the goalkeeper and past the defender on the goal-line. 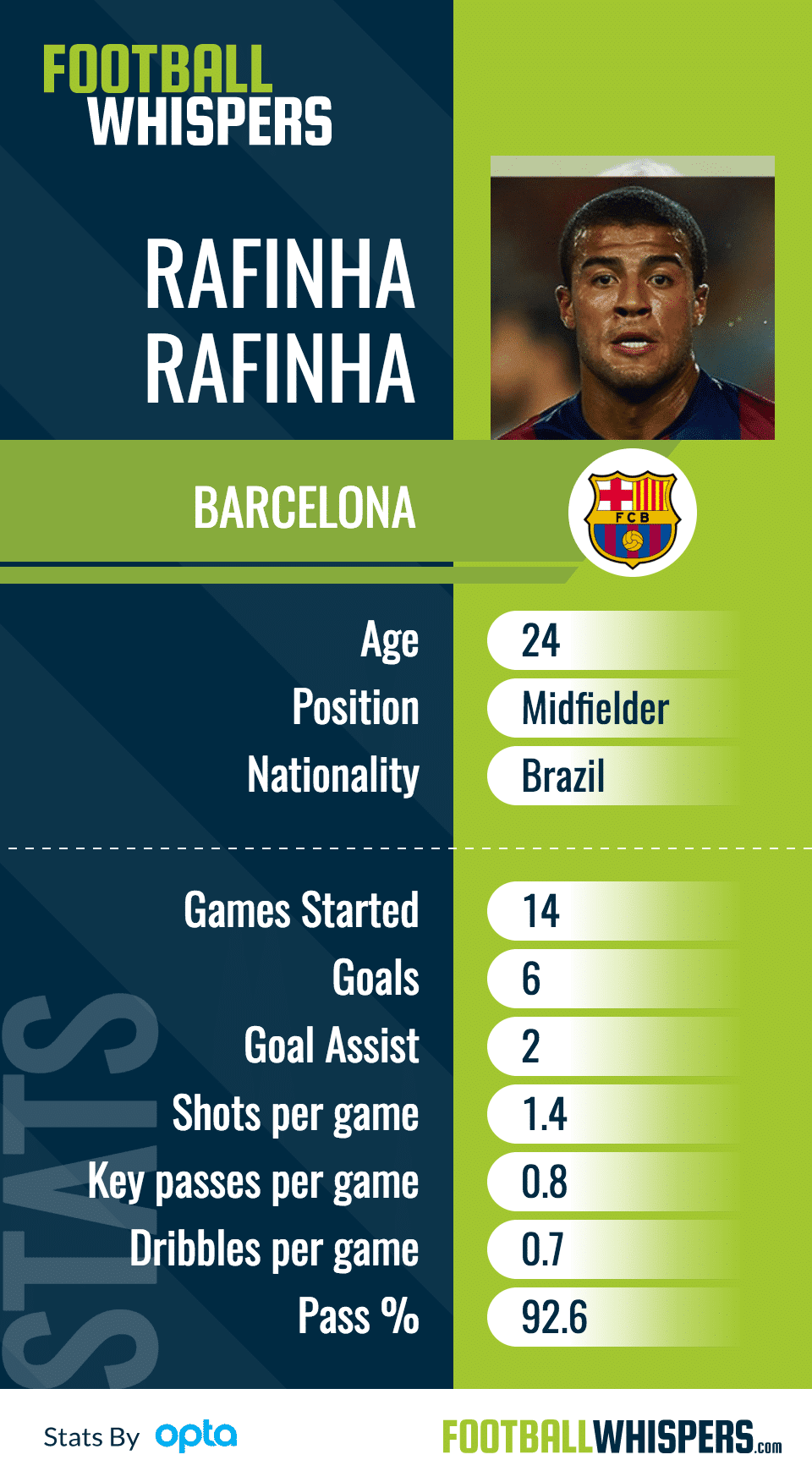 Read more: How would Coutinho fit in at Barcelona?

Rafinha has proven himself as a player who relishes the biggest matches, too. He broke the deadlock in a typically tense battle with Atlético Madrid in February, escaping his man in the middle before slotting expertly past Jan Oblak.

As mentioned earlier, Rafinha’s versatility may be particularly appealing to Juventus. Although he has often looked comfortably operating in the middle of the park, Enrique has used him as a right winger this season, too, a position he could take up at Juventus in a 4-2-3-1.

Signing Rafinha would offer a speedy, creative outlet on the right to provide stiff competition for Juan Cuadrado, who will sign permanently at the end of his three-year loan deal from Chelsea.

With nimble footwork, an eye-catching change of pace and an educated left foot, Rafinha would add another exciting dimension to Juve’s impressive attack.

What are the potential drawbacks?

Quick, versatile and technically adroit, on the surface Rafinha seems like a perfect fit for Juventus. But it would be remiss not to mention some of the potential drawbacks.

Firstly, Juventus would have to part with an enormous sum to land him.  He has a £64million clause in his contract and Barça are unlikely to sell him for much less than that.

If that proved to be the case, Rafinha would play his first season in Turin trying to live up to his astronomical price-tag. He certainly has the skillset and temperament to overcome it but, as we’ve seen with the likes of Paul Pogba, life as a marquee signing at a big club can be a burden.

With rocketing expectation levels, a period of adjustment may be required for Rafinha to fully blossom at Juventus. With the Old Lady trying to stay ahead of their closest rivals, having to be patient with him would be far from ideal.

The other problem, and one Juventus will certainly have assessed closely at this stage, is his injury woes. Rafinha has missed 20 games for the Blaugrana this season due to a series of setbacks, a worrying sign for a club preparing a sizeable bid to acquire his services.

His most recent injury, a meniscus problem in his right knee, has seen him ruled out since the start of April – so it remains to be seen if he can fully shake his problems

Even with the potential pitfalls, Rafinha represents a tantalising – albeit pricey – option for Juventus this summer. His father may have controverted recent speculation but it’s worth noting what the player himself said earlier this season.

“I want to continue at Barcelona but if I'm not given many minutes I'll consider leaving because what I want is to play. But we will see,” Rafinha told Catalunya Radio.

It sounds like he may seek assurances from his current employers this summer and, if he they fail to make the necessary guarantees, that could pave the way for him becoming the next high-profile addition to Allegri’s Juventus.