Juventus do not make many mistakes in the transfer market. Selling Riccardo Orsolini to Bologna in June might be one.

The 23-year-old joined I Rossoblù last summer after spending 18 months on loan at the Stadio Renato Dall'Ara. Since then he has scored seven times and assisted a further four goals in Serie A – form the Old Lady have taken notice of.

Kings of the free transfer in recent years – think Paul Pogba, Dani Alves and Aaron Ramsey for starters – Juventus will have to pay handsomely to rectify their error in letting Orsolini leave.

According to Bologna sporting director Walter Sabatini, there is no written buyback clause and I Rossoblù are determined to keep their star man in Emilia-Romagna.

“At the moment, it is unthinkable that he could be sold for the figures that have been mentioned in the media,” Sabatini said. “We would discuss it with Juventus to ensure that everyone was happy with the situation.

“We are a strong club and, if the player were to leave, we would require compensation. In any case, we're not thinking about his departure at the moment and he is not on the market.

“I give Orsolini a value of not less than €70 million. I repeat that he will not leave. He is followed by the national team like so many others, and I think good news is coming to Coverciano [Italy's headquarters]. I hope he can go to the European Championship, but [Italy coach Roberto] Mancini doesn't need my advice.”

What makes Orsolini a particularly interesting case is his size relative to his position. At 6ft he is by no means a giant. But he is big for a winger and this gives him an edge over his opponents. He is physically strong and yet retains the pace you would normally associate with a wide player.

In Serie A this season, Orsolini ranks ninth for dribbles attempted (per 90) with 4.06. However, he only succeeds with 1.67 which puts him way down the rankings in that particular metric.

That success rate, or lack of, is down to his decision-making which – as with most young players – is erratic. The image below, taken from Bologna's 3-2 in over Roma last week in which Orsolini netted, shows just that. 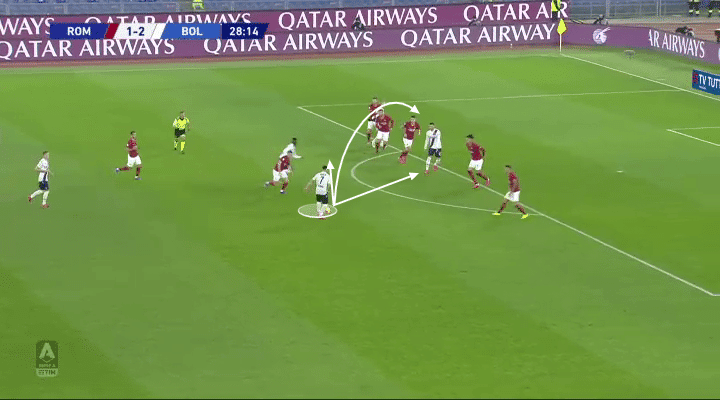 Having received Musa Barrow‘s pass, Orsolini decides the best option is to try and beat the Roma defence single-handedly, rather than returning the ball to Barrow or passing into either of the players ahead of him. Unsurprisingly, Orsolini loses possession and the move breaks down.

However, in the same game, he demonstrated his ability to make a nuisance of himself in one-on-one situations. Having received Radja Nainggolan‘s pass, Orsolini drives down the line and stands up Chris Smalling before clipping in a cross to win a corner. 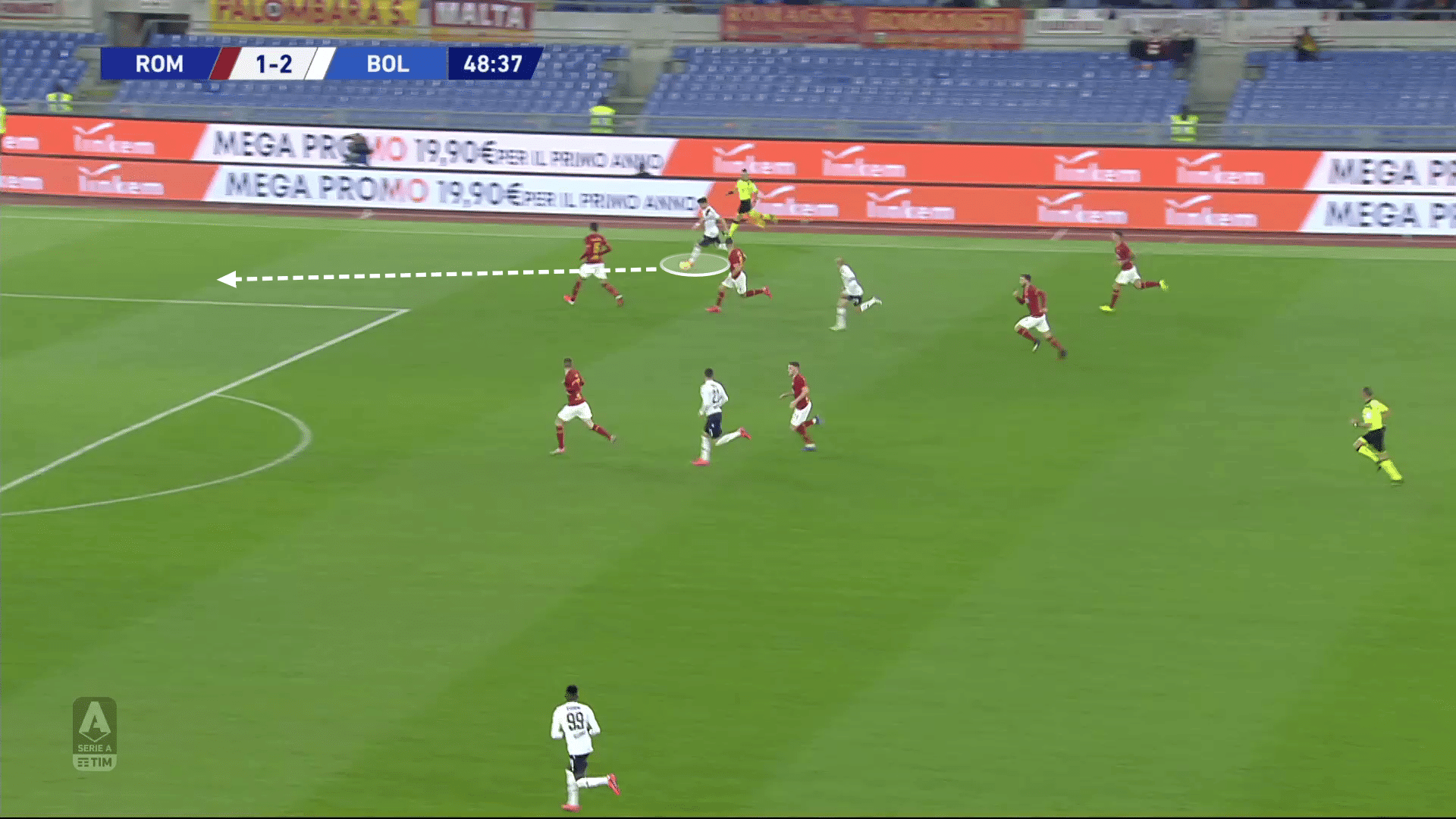 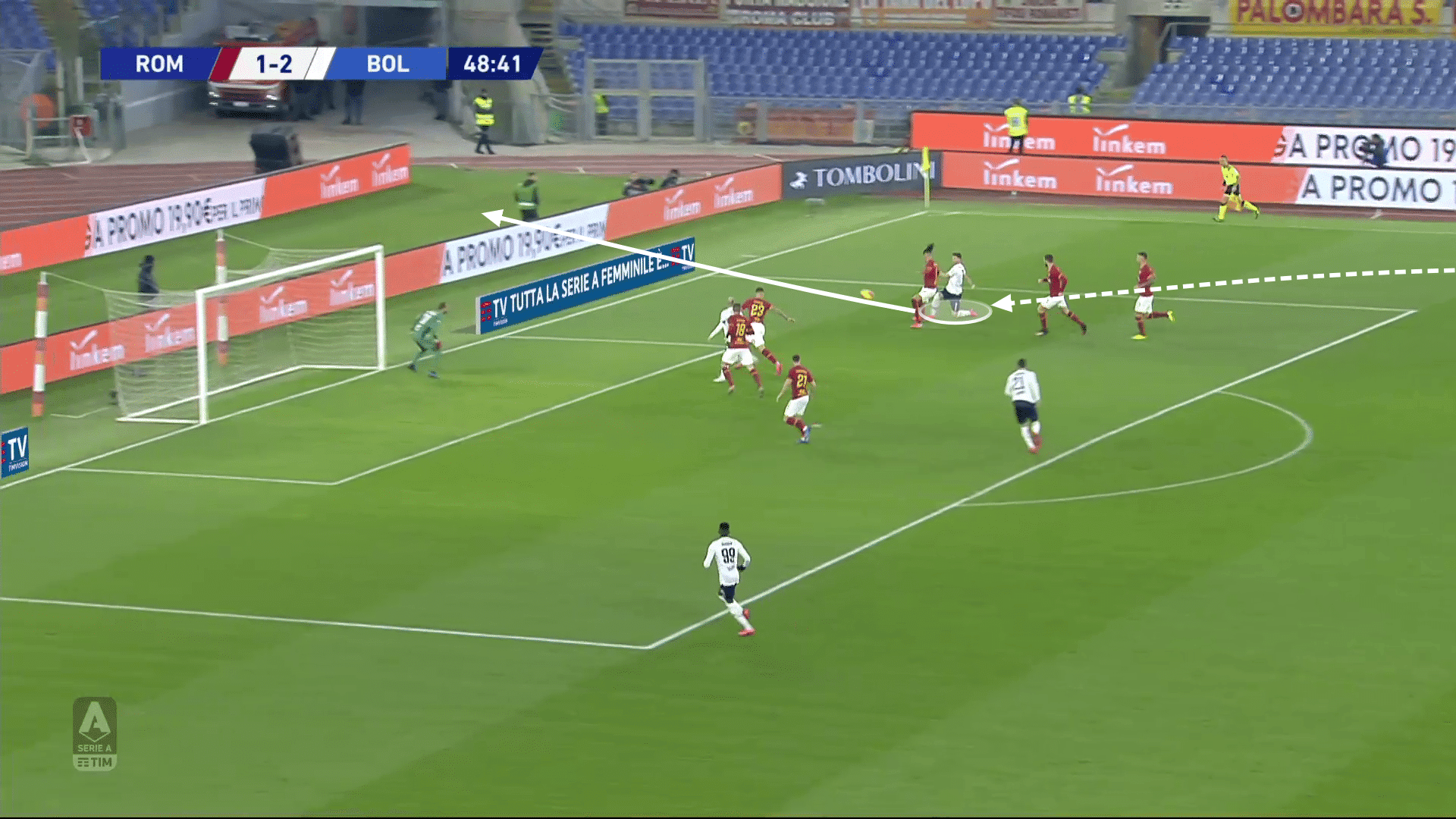 This situation is typical of Orsolini who, although left-footed, predominantly plays on the right-hand side of the three behind veteran striker Rodrigo Palacio in Siniša Mihajlović's 4-2-3-1 system. Comfortable going down the line or cutting inside, the variety in Orsolini's dribbling makes him an unpredictable threat.

His highlight reels display a range to his goals from the well-taken one-on-one effort against Roma to his thunderous free-kick from an impossible angle to secure a stoppage-time draw against Fiorentina (below).

With 4.42 touches in the opposition box (per 90), Orsolini gets into dangerous positions with regularity. Looking at his shot map for 2019/20, there is a clear pattern to his efforts on goal, the vast majority of which come from the right-hand side of the box.

Despite taking plenty of shots from outside the penalty area, he is yet to score from that range. Much like with his propensity to bite off more than he can chew when dribbling, a little more refinement in terms of his decision-making when shooting would serve him well. 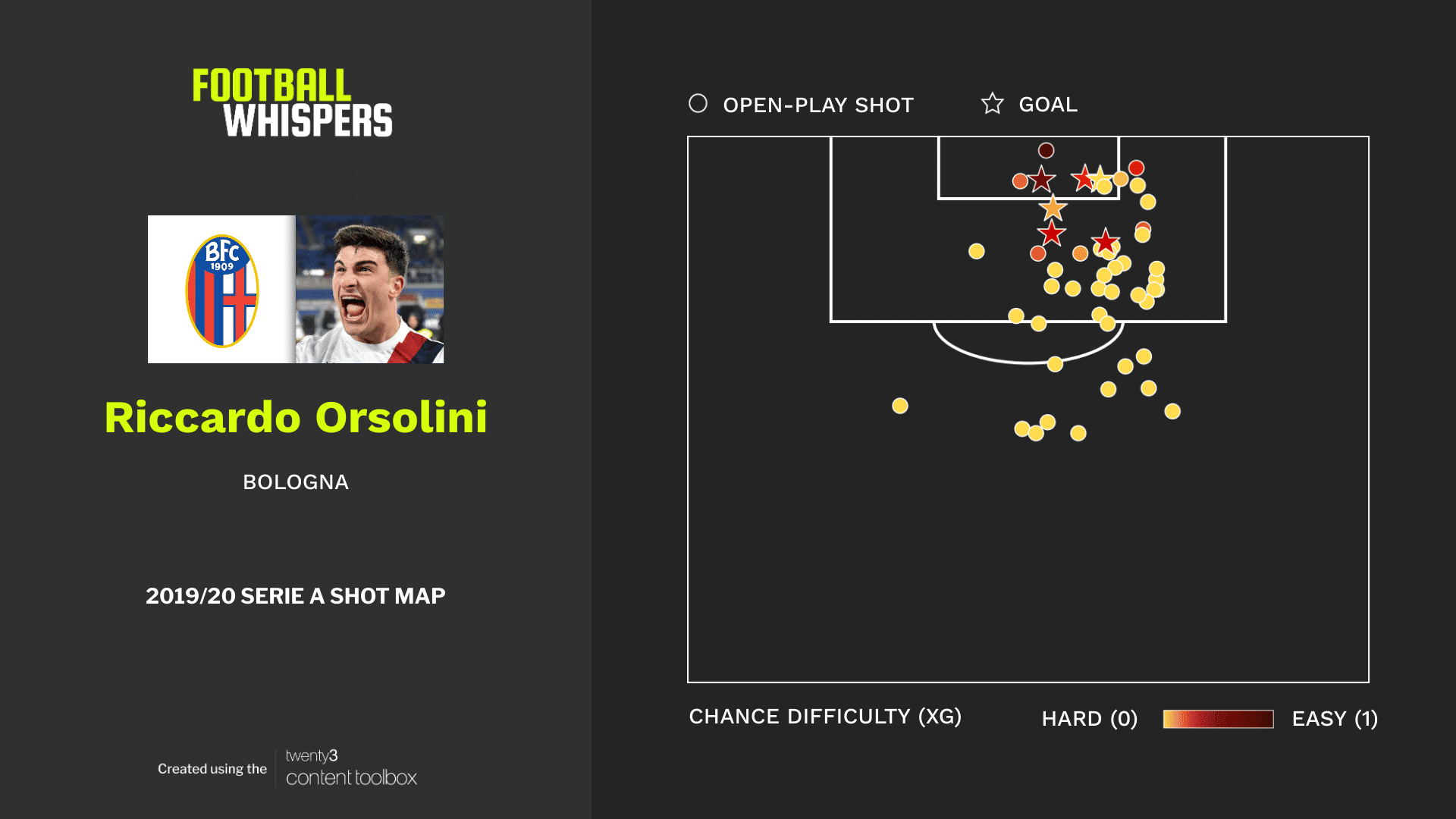 There is no doubting his ability and, as Sabatini alluded to, Italy have already come calling. Orsolini made his Azzurri debut in the 9-1 demolition of Armenia in Euro 2020 qualifying in November and marked the occasion with a goal, stooping to nod home Federico Chiesa‘s cross.

There's no little irony in the fact it was the Fiorentina winger who made the goal. Juventus are long-term admirers of the 22-year-old and were heavily linked with a big-money move last summer.

Their attacking arsenal is already well-stocked with Federico Bernardeschi, Douglas Costa and Paulo Dybala all vying for starts behind Cristiano Ronaldo.

The Bianconeri have not been afraid to swallow their pride in the past and bring players back. Gonzalo Higuaín is enjoying something of a renaissance at the Allianz Stadium after a season away on loan while Leonardo Bonucci and Gianluigi Buffon are both in their second spells with La Vecchia Signora.

It could be time to repeat the trick with Orsolini.