For several years Juventus were viewed as the perfect example of how a top European club should be run.

They monopolised Serie A talent, ensuring they positioned themselves to have first dibs on any potential stars. They also dominated the free agency market.

It was a sustainable project and one many tried to replicate. While it delivered Serie A title after Serie A title, the Champions League eluded them. And that quest to win Europe’s biggest club competition has become an obsession.

Aspiring to be the very best isn’t a bad thing. But the longer a club waits, the more desperate they become. Logic goes out of the window, uncharacteristic decisions are made and the project begins to eat itself from the inside.

Cracks began to appear in Turin last summer. Cristiano Ronaldo arrived in a deal worth in excess of £100million, if reports are to be believed, an eye-watering sum for a 33-year-old. Juventus went from long-term planning to short-term thinking in the blink of an eye in their pursuit for a first Champions League crown since 1996.

Ronaldo wasn’t the only big-name star to arrive at the Allianz Stadium in the summer of 2018. The club decided to bring 31-year-old Leonardo Bonucci back just 12 months after he forced a move to AC Milan.

Still a world-class defender, it came as a surprise to many when Juventus decided to trade Mattia Caldara to the Rossoneri to secure the services of the Italian international.

Caldara has had no luck since the switch to the San Siro, making just two appearances during the 2018/19 campaign.

It may appear as though it was a lucky escape for Juventus, with the Serie A champions ridding themselves of an injury-prone player. But pre-injury, the former Atalanta defender was tipped by many to be the future of the Italy backline alongside Alessio Romagnoli.

The 25-year-old had the ability to be a star for Juventus, and he was at the right age to play a part for the Bianconeri for the next decade. Success in Turin has always been built around continuity.

It’s perhaps why this summer Juve spent north of £60million on Matthijs de Ligt to shore up their defence for the foreseeable future. But the Dutchman is far from the finished article and he’s going to be learning on the job.

Juventus could’ve saved themselves a fortune had they either kept Caldara, trusted Daniele Rugani a little more or just gone all-in on new signing Merih Demiral.

The club also spent heavily on João Cancelo twelve months ago. The right-back turned out to be a shrewd signing and even outshone his compatriot Ronaldo at times.

Yet the 25-year-old appears to be heading to Manchester City for a €30million fee and Danilo heading in the opposite direction. The former Real Madrid full-back isn’t a bad player but he’s not in the same league as the one-time Valencia man.

Juventus are downgrading a key area in a Maurizio Sarri system all because they’re trying to bring in as much money as possible to reportedly finance a move for Paul Pogba.

The Manchester United star thrived in Turin before he returned to Manchester and could flourish again in the same environment. But the Serie A juggernaut have already invested heavily in their middle third over recent seasons. There’s no real need for Pogba but there’s a desire to add him to their ranks, even at the expense of the balance to the team.

Juventus have already signed Aaron Ramsey and Adrien Rabiot, both on hefty salaries due to their free transfer status, to their ranks this summer to bolster their midfield options which already included Miralem Pjanic, Sami Khedira, Emre Can, Blaise Matuidi and Rodrigo Bentancur.

The Serie A champions are also looking to add Romelu Lukaku to their attack and were prepared to offer Paulo Dybala in exchange.

The Argentine maestro arrived at Juventus in 2015 and slowly lived up to the hype. Pre-Ronaldo, he’d scored 68 goals in three season. Last term he managed just ten in all competitions. 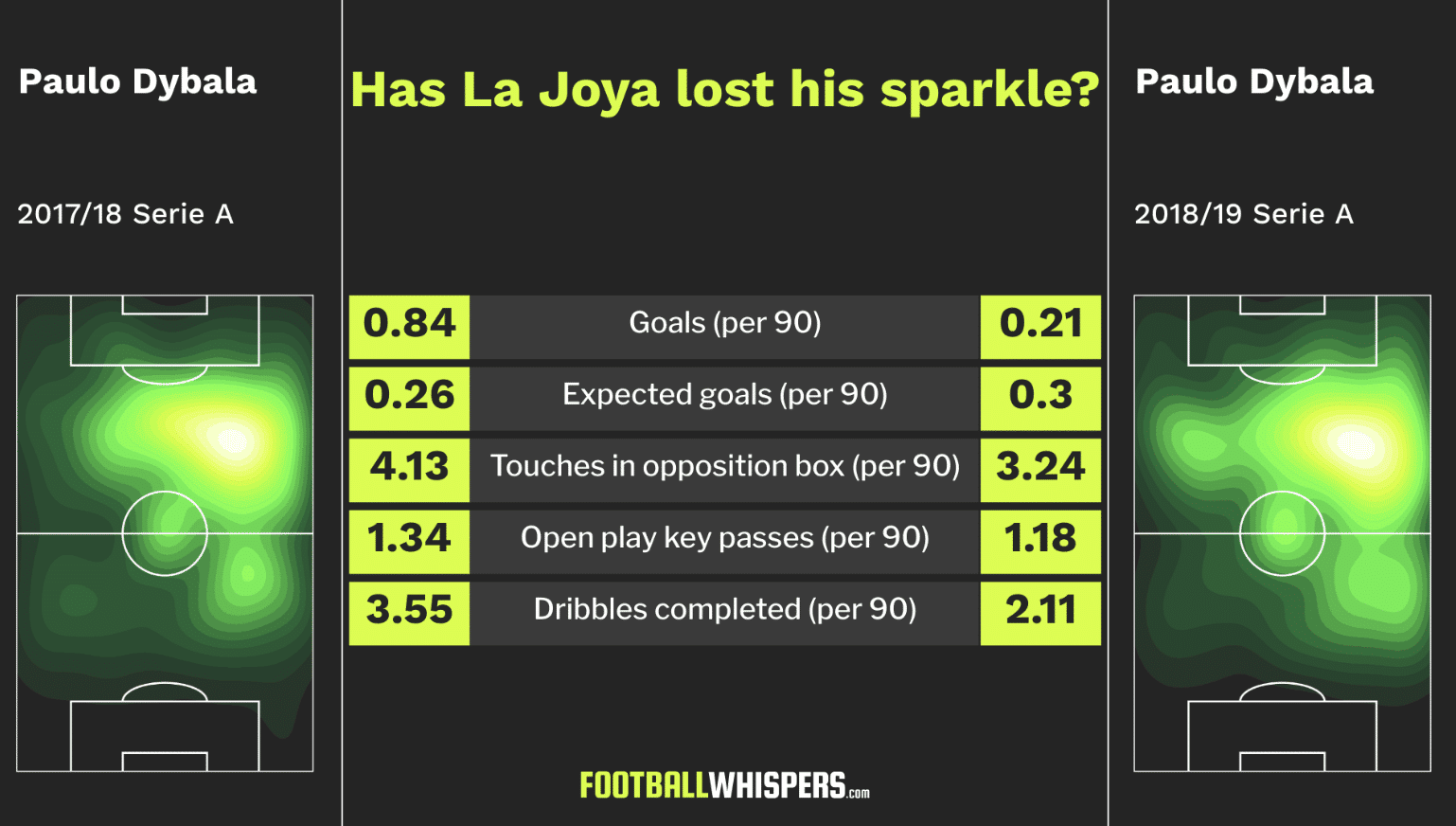 The former Palermo man went from being the future of the Juventus attack to an afterthought; sacrificed in order to enable Ronaldo to score the goals he’s expected to. It happened to Karim Benzema at Real Madrid and it will likely happen to Lukaku if the Belgian does get his move this summer.

Dybala isn’t the only one to be kicked to the curb, either. Juventus have cashed in on Moise Kean, one of the most exciting talents in Italian football, and the only real reason is to generate money to be spent elsewhere.

Everton parted with just £25million to secure the services of the 19-year-old wonderkid. With him gone, Sarri’s attacking options are made up of 34-year-old Ronaldo, 33-year-old Mario Mandžukić and 31-year-old Gonzalo Higuaín.

It won’t be long before the Bianconeri are once again forced to invest in their attacking third options when Kean had everything needed to go on and become a club legend.

Unless Juventus are able to deliver a Champions League trophy during Ronaldo’s time there, this experiment will have been an expensive disaster and it will take years to fix the damage caused.

Not only will they suffer in Europe, their status domestically will be challenged as they look to restart a project that was almost perfect up until the point they started to tinker in an attempt to ensure short-term success.