Johan Cruyff said his Holland team of the 70s were immortalised by their failure to win the World Cup; but could the same be said about a Denmark side which won-over the world with their infectious style and attacking nature – not to mention one of the finest attacking players of his generation?

It might seem odd to wax lyrical about a side that were only ever really also-rans; but it was a combination of swashbuckling attacking and do-or-die defending which lead Michael Laudrup himself to modestly dub the Danish team of the mid-1980s, “Europe's answer to Brazil.”

In reality the comparison with Holland is probably more accurate than that of Brazil, a team who promised so much, yet delivered so little while still entertaining by the bucket load. However, the appeal of that Denmark side wasn’t the fact that they won, it was the fact that they were a refreshing change, a joy to watch and also contained one of the finest dribblers in the game.

Born in Frederiksberg, Denmark, in 1964, Michael Laudrup was was already catching the eye as a promising talent at the age of just 17. He signed his first professional football contract in 1981 for Kjobenhavns Boldklub and a year later moved onto Brondby, a respected team in the top flight of Danish football.

That same year Laudrup made his international debut at the tender age of just 18 – he was already playing without fear in an era rife with majestic midfielders, not to mention tough tackling defenders intent on stopping them in their tracks.

At the start of the 1983/84 season Laudrup had attracted the attention of Liverpool, who were looking for a long term replacement for Kenny Dalglish. A lifelong Reds fan, the deal looked to be the dream move, but at the last minute a contractual issue saw the transfer fall-through and Laudrup moved to Juventus.

But it wasn’t just at club level that Laudrup was showing off his talent; on a national stage he and his teammates were about to cause something of a stir on a global scale too. 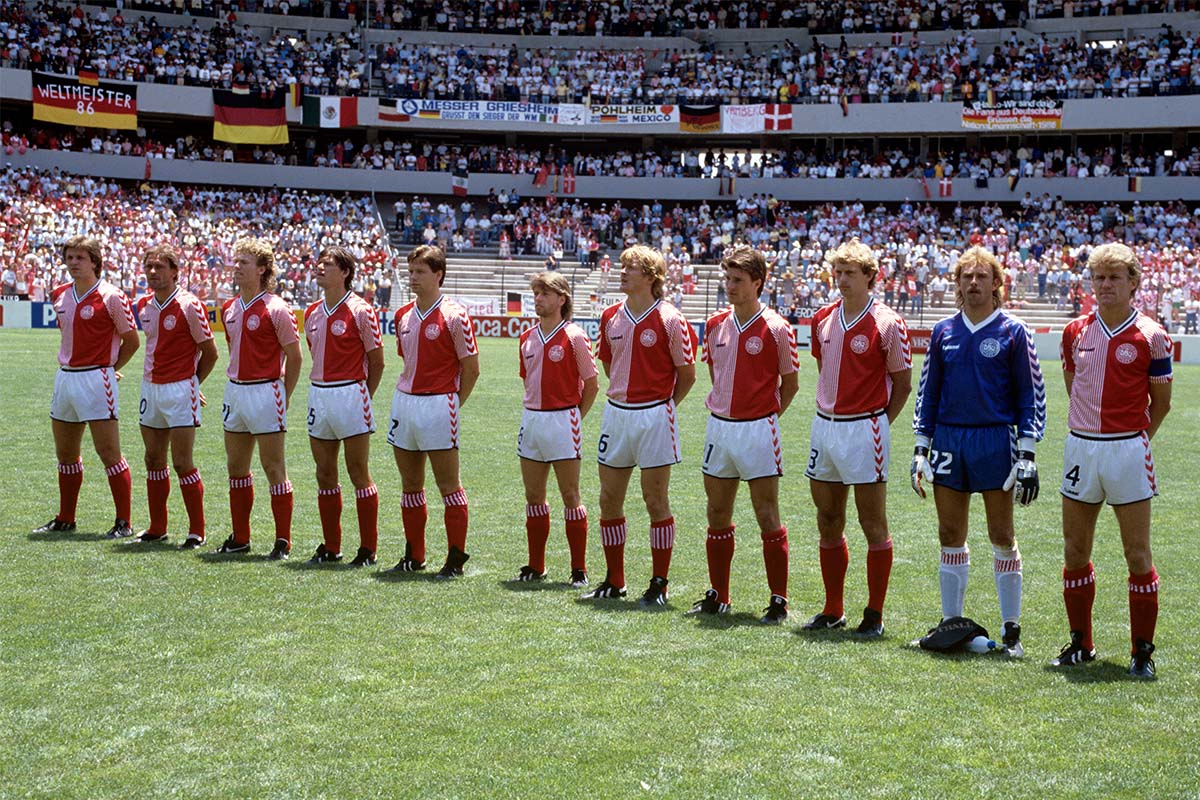 They may have been fortunate to have some of the most exciting players from across Europe who attacked at pace and at will at their disposal; but to be honest, the real attraction of Denmark in the 1980s was the fact that they looked like something of a glamorous Sunday-league side.

A collection of mop-topped, dishevelled and in some cases, barrel chested, individuals who were going toe-to-toe with the likes of Platini, Rossi and Zico and making a real fist of it. This was a bunch of normal guys playing football and they were pretty good at it too.

They played like angels, but still lived like the rest of us off the field. Everyone’s second team, they oozed confidence, though self-deprecation was never far away, making them likable to almost everyone, but probably preventing them from being the winners they could so easily have been.

Denmark’s arrival on the international stage in the 1980s was heralded in the build-up to Euro ’84, as they qualified for the finals at the expense of England; not bad for a country whose only major export was bacon and beer and where football had only been a professional sport since 1978.

In the finals that year they lost a cagey opening match to France 1-0 after a late goal from Platini, in a game best remembered for a horrendous leg-break for their midfield man Allan Simonsen, not to mention Manuel Amoro's headbutt on Jesper Olsen.

They then thrashed Yugoslavia 5-0 four days later in a game that they could easily have won 12-7; either way, it meant Sepp Piontek's team only needed a draw against Belgium, who needed a win in order to reach the semi-finals.

In a classic, end-to-end and incredibly ill-tempered encounter – due to the fact that many of the Denmark side played for Anderlecht – Belgium found themselves 2-0 up just before half-time, only for an Arnesen penalty and a Brylle header to haul Denmark level, before Elkjær scored a superb solo goal to take Denmark into the European Championship semi-final against Spain.

If it was possible, this game was even more exciting than the last. Lerby gave Denmark an early lead, and, in a dramatic second half, Arnesen and Elkjær hit the post either side of Antonio Maceda's equaliser. Spain had plenty of chances too as Bergreen was sent off in extra time for a second bookable, but Denmark held on for penalties.

In the shoot-out that followed Laudrup had the unenviable honour of being the first to miss and with the score at 4-4 Elkjær stepped up and skied his effort over the bar, meaning Denmark would be heading home having impressed millions and making plenty of friends.

It wasn’t just the team who had proved popular either. Around 16,000 Danes went to Euro 84 and there was a party on the streets for every game. Much of this was due to the “Roligans”, the Denmark fans renowned for their peaceful good cheer (Rolig being the Danish word for mild-mannered) who were described by locals as “the nicest drunks in the world.”

Going into the World Cup two years later in Mexico manager Piontek promised, “In Mexico we shall attack, like we always do,” and he didn’t disappoint. The Danes again impressed with a style of playing the game that was a joy to watch. Laudrup was far from the only attraction as alongside him were the likes of Jesper Olsen, Soren Lerby, Preben Elkjaer, Jan Molby and Frank Arnesen.

Denmark found themselves in what was to be known as the “Group of Death” with West Germany, the South American champions Uruguay and Scotland and were bottom seeds because it was their first World Cup. Even so they breezed through with three wins out of three, destroying Uruguay 6-1 for good measure.

But in a twist of fate that worked against them, by doing so well and topping their group this would mean that Sepp Piontek’s side would play Spain in the last-16, who were seen as underachievers at the time. Those who had seen their previous performances and positive brand of football predicted a Danish victory and after taking the lead all seemed to be going to plan, but everything changed when Madrid star Emilio Butragueno intervened with four goals and Spain romped to a comfortable 5-1 win.

Despite the disappointment many of that Denmark side had used the tournament either as a springboard to further success or as a shop window to attract the attention of other clubs. Jan Molby continued to be the magician in the centre of Liverpool’s midfield, while Jesper Olsen would add plenty to the Manchester United side of the late 1980s.

As for Laudrup, he remained in Italy as part of a Juventus side that battled with Milan for supremacy of the Italian domestic game, but as the decade came to a close he decided to cut his losses and join Johan Cruyff's Barcelona. 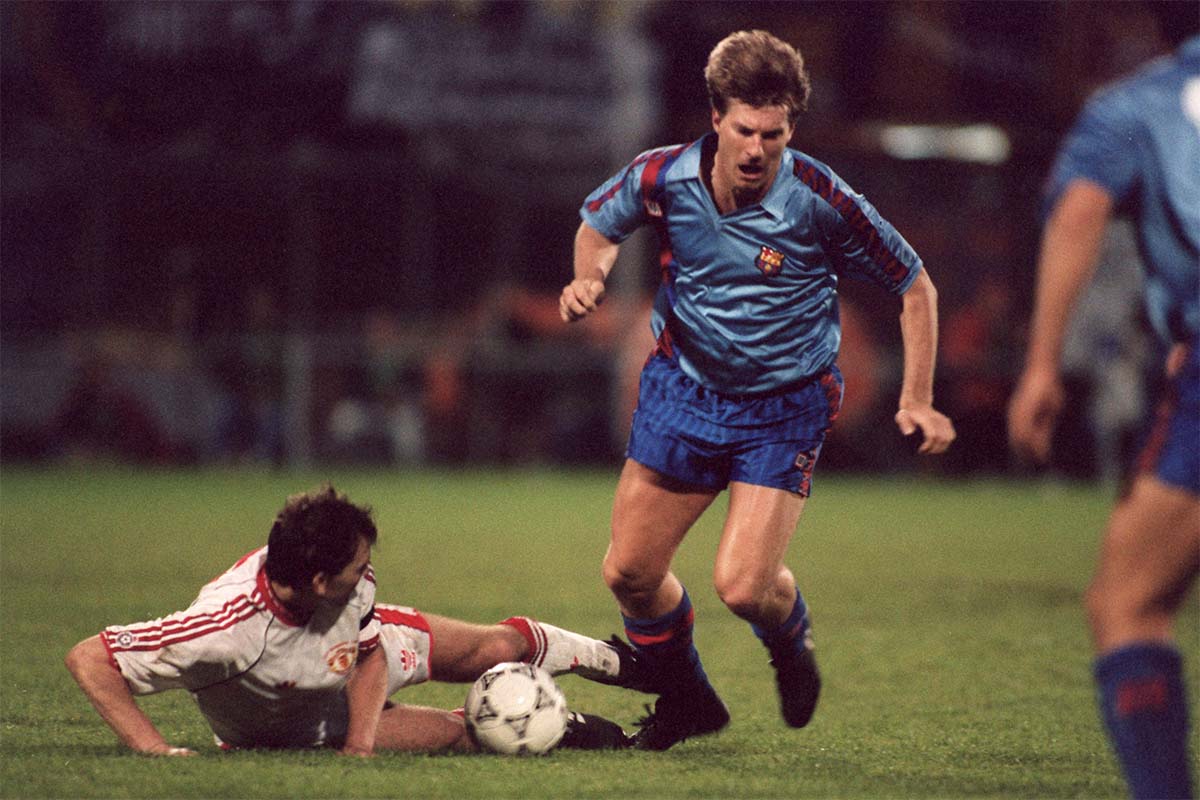 At the Nou Camp he was able to learn from the Dutch master himslef, a player he had been compared to many times thanks to quick acceleration, fantastic dribbling ability and perpetual movement. His style also fitted in well with the way Cruyff wanted to play the game.

He was part of the so called Barca ‘dream team’ that would win four league titles on the bounce and a European Cup, while twice Laudrup won League player of the year during his time with the Catalan club; but things came to something of an abrupt end when Laudrup was not selected for the 1994 European Cup Final versus AC Milan.

Following this high-profile spat with Cruyff, Laudrup shocked the footballing world when he decided to join arch rivals Real Madrid, a move that many believed was a result of the high-profile spat.  In fairness to Laudrup, Madrid were looking to rebuild and the player obviously saw potential and was right in his assumption.

Real Madrid soon regained the league title from their arch-enemy almost immediately, meaning, Laudrup became the first man to win four consecutive league titles with two different clubs in what was to be something of a swan-song for one of the world’s greatest players.

Those who witnessed his performances for both club and country will speak of a player who illuminated the game with his blend of natural skill, ability, talent and a ferocious will to win. As for that Denmark team for whom he was so pivotal in the mid-80s, it might not have been the most successful in the country’s history, but for many it was definitely the most entertaining.