When you think of the German tactician you think of him losing his cool in the Champions League match when he was the manager of Borussia Dortmund.

You think of him giving Sadio Mané a piggyback after his new signing curled home that left-footed effort against Arsenal on the opening day of the 2016/17 season.

You might even think of him running onto the pitch to embrace Alisson after Divock Origi’s 96th-minute winner in the derby.

Yet over recent weeks, Klopp’s shown the cold, calculated side to his game.

It may not have become apparent until after the Everton at the beginning of March but with the season entering the endgame, everything fell into place, and the picture became clearer.

At times during the 2018/19 campaign, people have accused him of being conservative. Certain games were there to be won but instead, much to the frustration of fans, he settled for a draw.

The games against Leicester City and West Ham United undoubtedly spring to mind. The Reds took the lead in both games but ultimately failed to make possession count as the matches fizzled out into score draws. Manchester United were there for the taking when Liverpool made the trip to Old Trafford but they managed to thwart the visitors and claim a 0-0 draw.

The derby was another you could file in the missed opportunities cabinet. But it was after that match that the switch was flipped.

Klopp had navigated the games he deemed tricky and came out of them unscathed. Yes, the Reds dropped points along the way but they’d incurred no losses since the defeat to Manchester City.

And since that draw at Goodison, Liverpool have been relentless.

Perfect in both the Premier League and the Champions League. What is to say this would have been possible had the Reds been throwing everything they had into earlier games. Exerting more energy, risking more injuries and racking up more miles on the clock in games they didn’t have to win, they just didn’t have to lose.

Klopp ensured his team were in a position he felt they needed to be in. A platform they could use to go on and win everything.

Against Burnley, Klopp went with Adam Lallana in midfield. At the time, it went under the radar. But that decision signalled the end of the conservative approach. In its place, Klopp 3.0.

It wasn’t a flat midfield three. It wasn't a midfield unwilling to take risks and influence play in the middle third. Lallana, though a midfielder when looking at starting positions, was playing as a roaming No.10 most of the time. It turned the trio in the attack into a quartet. And Liverpool responded with four goals.

Against Fulham, Klopp did the same again. The outcome wasn’t as effective but the intention was there. Lallana started in midfield. Liverpool sacrificed a holding midfielder to get him in there.

Spurs at Anfield represented a much trickier task. Though the Liverpool boss went with his tried and tested midfield three, it was his substitutes which revealed a change in mindset. He subbed off James Milner and Jordan Henderson and replaced them with Fabinho and Origi.

Yes, the Reds could’ve lost the game. But they didn’t. Klopp’s bravery was rewarded when Salah’s header trickled over the line after a little help from Hugo Lloris and Toby Alderwereled. 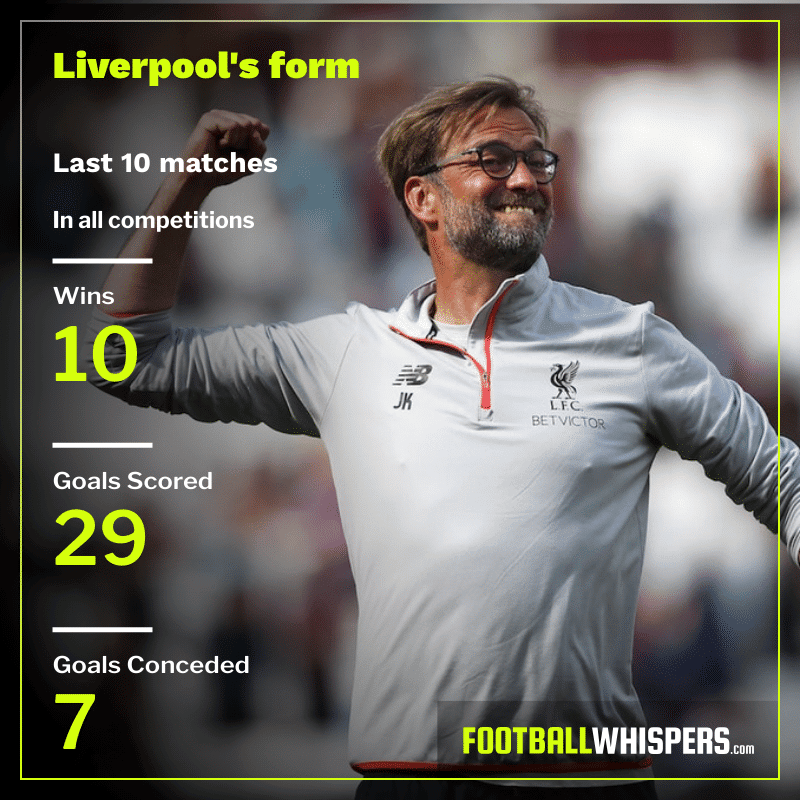 Naby Keïta returned to the XI against Southampton and finally found the back of the net. But it wasn’t the Liverpool No.8 who stole the show. It was Jordan Henderson. The captain was deployed in a box-to-box role and he ran the show after coming on, grabbing an assist and a goal in an advanced role.

Against Chelsea, the manager resisted the urge to go with the safer option in midfield and instead went with Fabinho, Henderson and Keita. Just like in the match against Spurs, it was more open in midfield but the Reds, especially Keita, thrived in such surroundings.

It’s been a similar story in the games since with Liverpool taking maximum points off of Cardiff City and Huddersfield Town. Klopp could’ve opted for control in those games, plumped for the Henderson, Milner and Wijnaldum trio, but hasn’t.

Instead, he’s allowed Keïta to able to do Keïta things. Henderson has at his best again as a box-to-box midfielder, and the two have responded in the form of goals and assists.

During this ten game winning streak, Keïta has struck three times while Henderson has one goal and four assists.

Klopp has played this season almost perfectly. He went toe to toe with Guardiola last season and while he won a few battles, during the three victories over Manchester City, he lost the war by finishing 25 points behind the champions.

The Liverpool boss played the long game this season. He managed his player’s minutes and the style the side used. In nearly every other Premier League campaign it would have been enough to deliver the title. It still might be. It all depends on how Manchester City navigate their final three matches.

Whatever happens, Klopp the schemer deserves a lot more credit than he’s getting.