Liverpool find themselves in a strange position this summer. In years gone by there have been clear areas to improve. This time around, it’s all about tweaks here and there.

It’s perhaps the greatest challenge they’ve ever faced in the transfer market.

Last season the Reds amassed 97 points in the Premier League and lifted the European Cup for the sixth time. Improving on that will be nigh-on impossible. Yet you risk going backwards if you stand still in football.

It’s all about marginal gains at this level. Marginal gains such as unearthing players who can play multiple roles meaning in-game changes are seamless. Or identifying individuals with the ability to potentially oust a key member of Jürgen Klopp’s core group.

At first glance, links with Real Betis full-back Júnior Firpo don't make much sense. The 22-year-old has a €50million release clause and reports in Spain claim the Reds see him as a replacement for Alberto Moreno as Andrew Robertson's understudy.

It's a fair chunk of change and as a back-up full-back only he's not worth it.

But there's reason to believe the Barcelona transfer target wouldn't be arriving on Merseyside solely as Moreno's replacement. Firpo has played at wing-back for Betis, he can play as a wide midfielder and, if necessary, perhaps even as a winger. There's also a belief he can do a job at centre-back, too.

He offers options down the left flank which, in turn, gives Klopp a number of possibilities.

Furthermore, the Spain Under-21 international is one of the few full-backs in the world right now who could fill in for Robertson without a noticeable difference in output or stylistically. 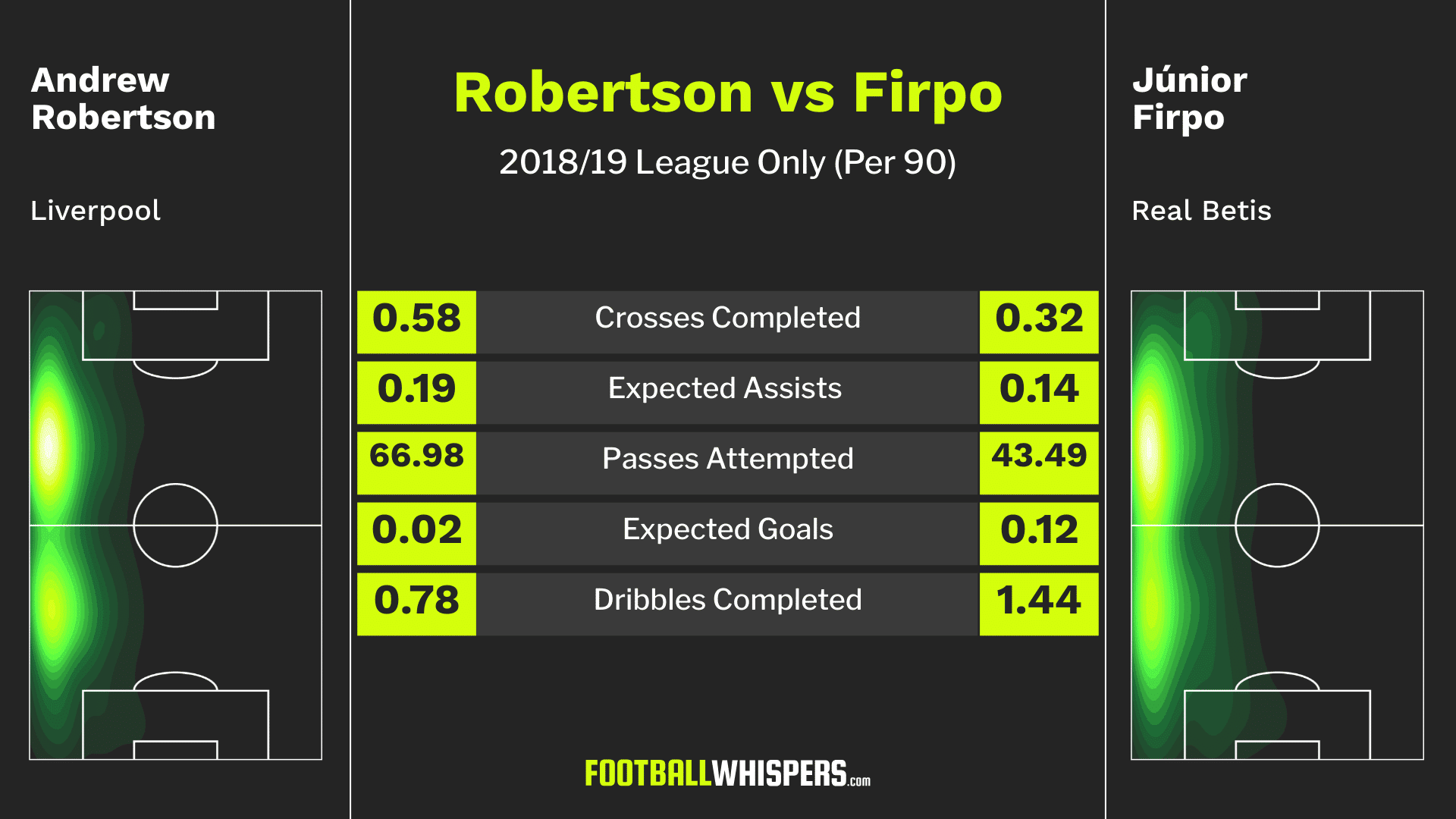 Both dominate the left-hand side. Unlike other full-backs who drift in, Firpo and Robertson act as wingers hugging the touchline for the most part. The Real Betis man doesn't complete as many crosses but he's just as creative. Robertson's expected assists average for the season was 0.19 per 90, just 0.05 more than Firpo.

The 22-year-old comes out on top when looking at expected goals, averaging an impressive average of 0.12, significantly up on Robertson's 0.02. He also completes close to double the number of dribbles the Liverpool left-back averages. Now, that isn't necessarily a required trait, with neither full-back in Klopp's team needing to beat men to carve out their crossing opportunities.

But it's a handy trait to have, especially when Firpo's dribble completion was close to 75 per cent during the 2018/19 season. 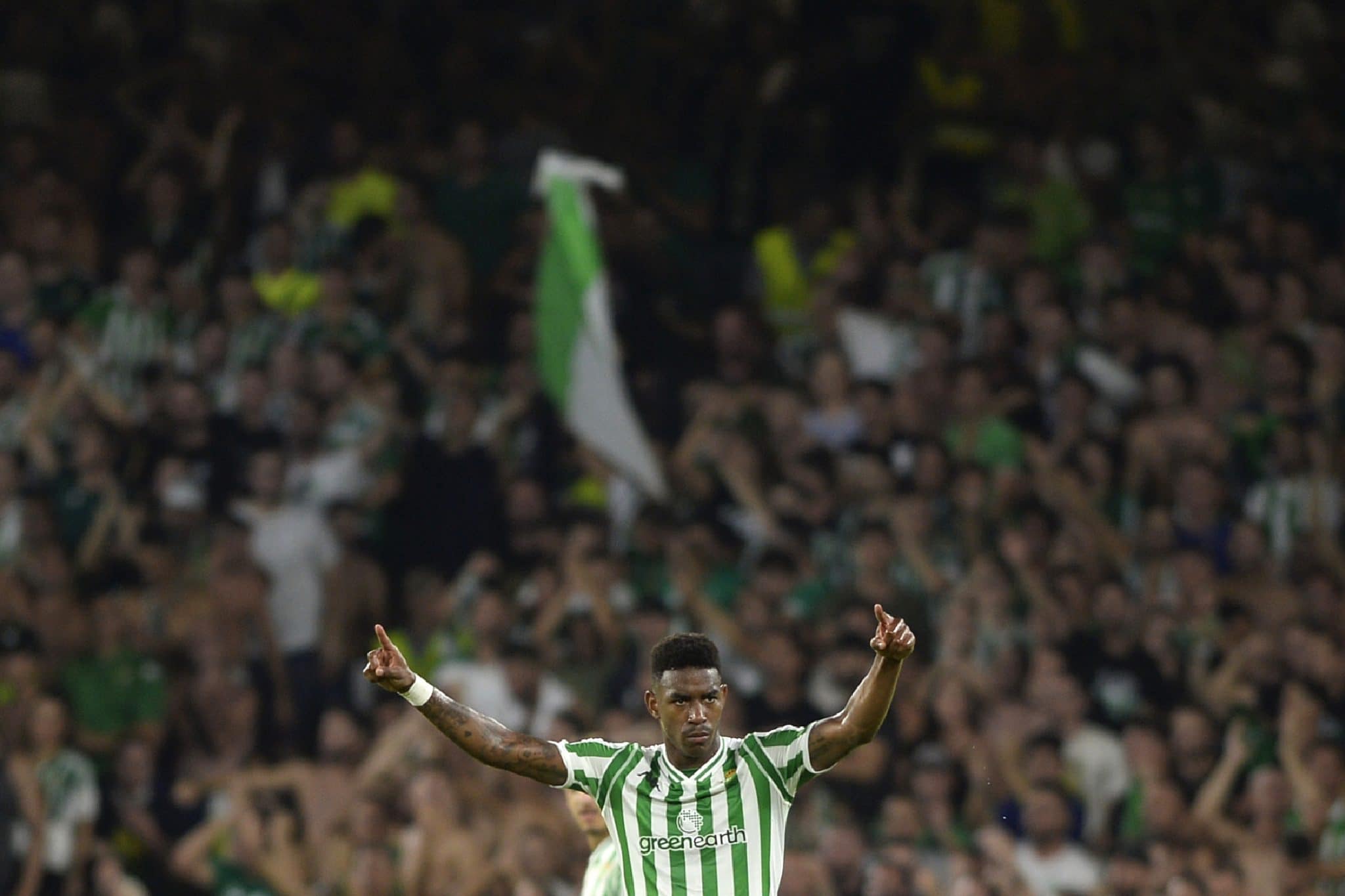 The only real question mark over the versatile defender is how he'd adapt to seeing a lot more of the ball. For Betis last season, he averaged just over 43 per 90. Robertson, on the other hand, racked up just shy of 67 passes – a difference of 24.

Of course, team style directly impacts those figures. Liverpool look to dominate possession with the full-backs being a key part in this. The Reds sustain their attacks largely because of how involved Robertson and Trent Alexander-Arnold are. Both will get on the ball, keep the width and show patience, enabling Klopp's men to pick the perfect moment to move the ball into central areas.

Betis, too, like to dominate the ball and averaged close to 60 per cent possession in LaLiga. However, they build their play a little differently. They look to piece together attacks centrally. The centre-backs and the centre-midfielders average the most passes on a per 90 basis with the wide players only really getting involved during the final stages of attacks. 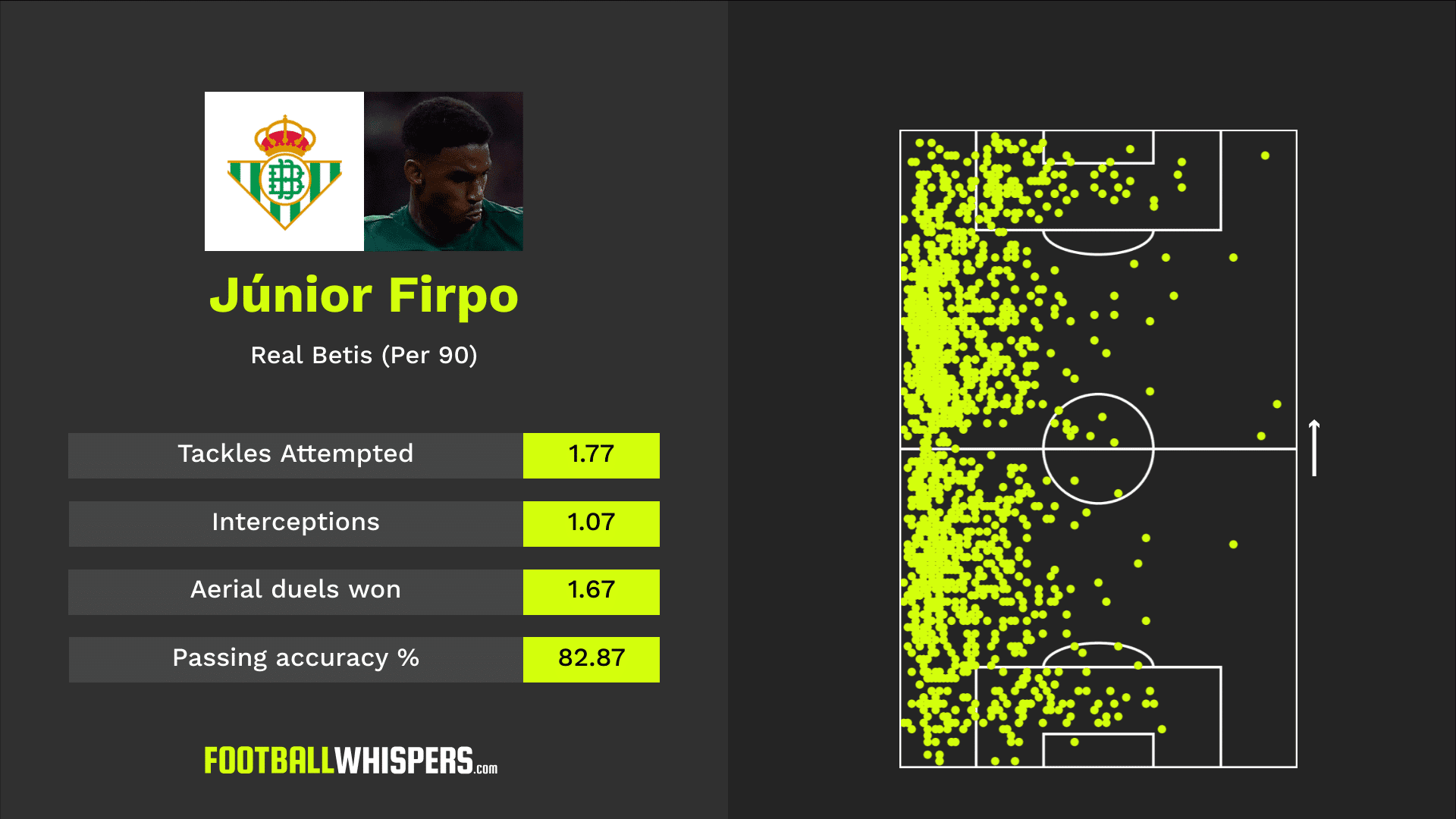 The fact he's so involved in the attacking phases is highlighted in his touch map above. He has more touches in the offensive half, with a cluster of those just outside the area, the space Robertson often finds himself in when looking to get the ball into the area.

Firpo also likes to get into the penalty area, averaging four touches in the box per 90 compared to Robertson's 2.51. That was playing primarily as a wing-back last season. Given greater license to get forward that average would likely increase and he'd be even more of a goal threat.

Betis are in no rush to sell Firpo. The 22-year-old has a contract until 2023 with the club and are likely going to cash in on Giovani Lo Celso this summer meaning they aren't in dire need of cash. Liverpool would more than likely have to pay his release clause to land him.

While €50million seems steep, the Reds would be signing a player who can fill five roles and cover multiple positions. When you break it down like that, it's a fair price and he'd be a shrewd addition to Klopp's squad.