The Bundesliga has played host to several surprise stories this season.

From the rise of RB Leipzig to Wolfsburg’s rapid fall from grace and even Anthony Modeste’s impressive scoring streak, but nothing quite matches up to the Julian Naglesmann's story.

You may be expecting the fairytale story of a guy in his mid-20s who mastered the ins and outs of Football Manager before landing his first real gig, but his story is one of despair, hard work, wit and tactical brilliance.

Having had his playing career cut short after joining Augsburg aged 20, Nagelsmann went on to study business administration at university before eventually moving into the field of sports science. It helped shape his tactical acumen.

“At first, I didn’t want anything more to do with football,” Nagelsmann said. “It was very sad for me that I had to end my career so young, from one day to another my career was over faster than I imagined.”

But after putting in the work at university, the ex-defender set himself on the path to becoming a manager. 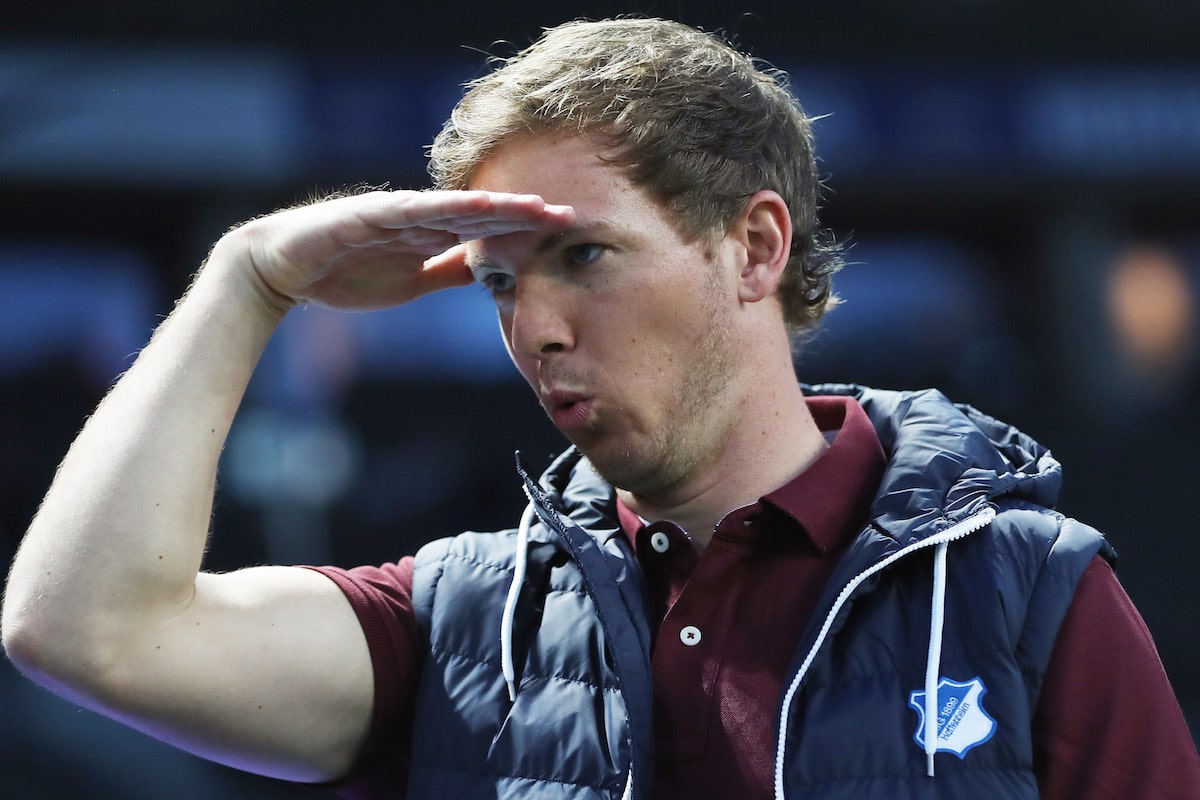 Bayern Munich tried to snap him up a few years ago, not as the first-team manager but as coach of their Under-23s. Chairman Karl-Heinz Rummenigge didn't want the chance of recruiting a managerial prodigy to elude the Bavarian giants.

Yet Nagelsmann wasn't interested and opted to manage Hoffenheim’s Under–19s instead.

It didn't take long for the club’s hierarchy to take notice of his ability and, in the middle of last season, they offered him the role of first-team manager following Huub Stevens’ resignation.

Nagelsmann was finally in the big leagues, although probably not how he would have wanted given the Kraichgau outfit were 17th in the Bundesliga and in real danger of suffering relegation.

With nothing to lose and everything to prove, Baby-Mourinho managed to lead his side to seven wins in their last 14 games. Hoffenheim completed a great escape and the entire Bundesliga sat up and took notice of the 28-year-old.

Yet it wasn’t until this season that Nagelsmann became a big name in Europe’s managerial scene.

Whilst Leipzig were mounting a title challenge at the start of the season, Hoffenheim were building a steady foundation from which to launch themselves into the top four.

Seventeen games into the Bundesliga campaign and Hoffenheim were the only unbeaten side in the Europe’s top five leagues.

Their first defeat came after the winter break. Nagelsmann's side succumbed to a 2-1 defeat at the Red Bull Arena. Would the bubble burst?

For many clubs, perhaps. But for Hoffenheim, it highlighted the foibles in the Naglesmann’s tactical approach and allowed him to address them vehemently.

Hoffenheim currently sit third in the Bundesliga standings having lost just three games this season. They are showing no signs of dropping off anytime soon.

Great example of Hoffenheim's vertical build up passing under Nagelsmann. Up, back and through to attract press and open up space to attack pic.twitter.com/BBBpAvF3BM

The now 29-year-old's advocacy is based on “30 per cent tactics and 70 per cent social competence”.

He knows when to put his arm around players, when to be feisty and, most importantly, how to rally his troops.

But don’t be fooled by his emphasis on personal relations.  His tactical acuity has played a significant role in Die Kraichgauer’s rise to prominence.

Most modern managers draw inspiration from Marcelo Bielsa 3-3-3-1’s system but Nagelsmann drew his inspiration from Ralf Rangnick, one of the pioneers of the pressing game in Germany, and the rationalist Thomas Tuchel, who he served under at Augsburg.

Nagelsmann’s philosophy is centred on tactical flexibility. The fluidity of his system sees Hoffenheim divide the pitch into defence and attack. There is little time spent in the middle of the park when they’re on the front foot.

Hoffenheim utilise a system that often resembles a 3-5-2 with six defensive minded players and four attacking players, two of whom are central midfielders.

Most of Hoffenheim’s attacking moves go through the centre as the team uses layoffs from the strikers to the midfielders in a bid to draw out the opposition’s defenders and create space between the lines.

Oliver Baumann sits strongly in goal and serves as somewhat of a sweeper keeper who starts the team’s build–up play.

Bayern-bound Niklas Sule, Benjamin Hubner and Kevin Vogt play specific roles in defence which involve pressing hard defensively, dribbling into space and laying the ball on for the midfielders who reside further forward.

Jeremy Toljan and the currently injured Pavel Kaderabek feature as wing-backs who allow the team to switch to a flank-based system when the midfield gets congested.

The system’s flexibility also allows them to push higher up the pitch in a bid to defend from the front whilst also possessing the freedom to cut inside.

Kerem Demirbay and Sebastian Rudy, another player bound for Bayern, usually feature as the playmakers in midfield.

They move intelligently into different channels with pace before releasing the ball for Andrej Kramaric, Sandro Wagner and on occasion, Adam Szalai. 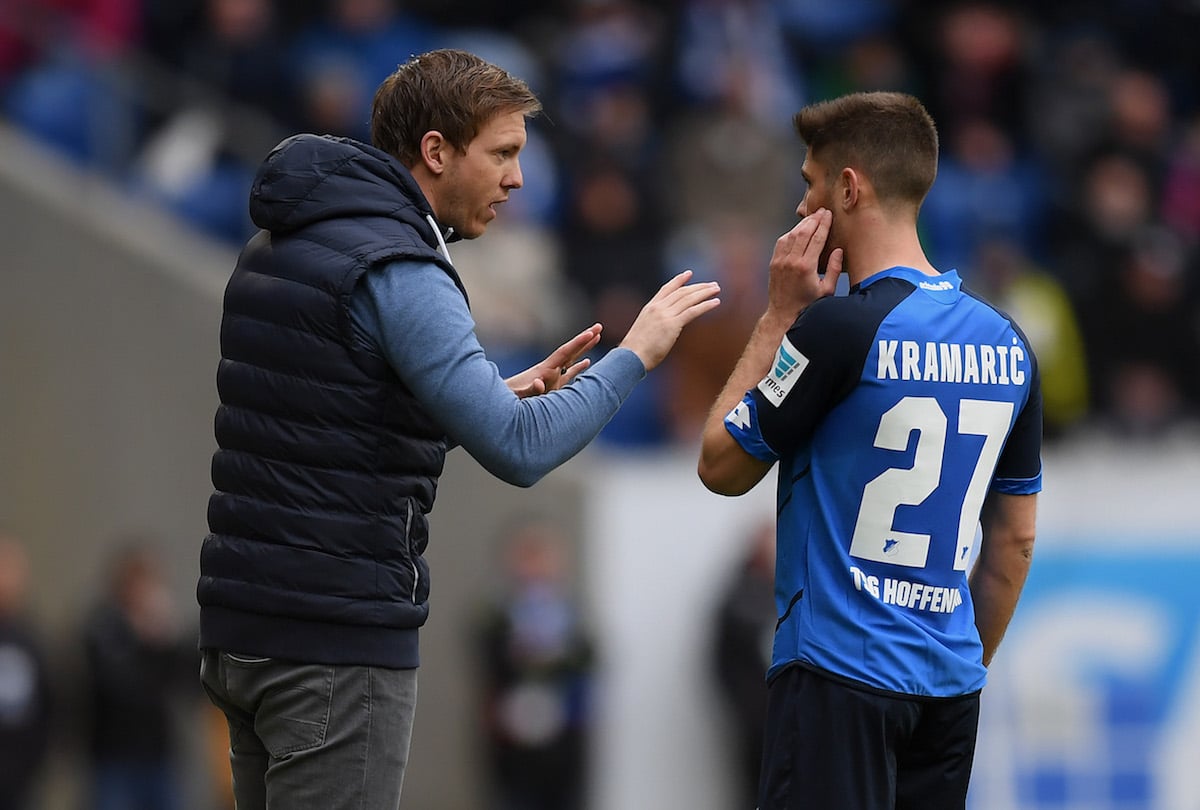 Kramaric, who most would remember from his barren spell at Leicester, has been firing on all cylinders in the German top flight.

He uses his pace and movement to run into goalscoring positions and also to drop deep in a bid to collect the ball and create goals up for his teammates.

Hoffenheim are difficult to play against because of their unpredictability.

Nagelsmann has made it so that his side, more often than not, have an answer for whatever question the opposition may throw at them.

Nagelsmann doesn’t adhere to conventional tactics – his unorthodox style of play is quintessential of his irregular standing in German football.

And this is just the beginning for the young manager and Die Kraichgauer who look capable of challenging for the Bundesliga title in the coming seasons.