Jürgen Klopp recently claimed Liverpool don’t have to invest heavily this summer. The Reds boss believes the players he currently has at his disposal can still improve.

With that in mind, it’s safe to assume the Premier League leaders won’t be battling it out to sign the £100million-rated Jadon Sancho or £70million defender Matthijs de Ligt. However, it does mean Michael Edwards can put his laptop to good use and add to the list of bargains he’s found in recent seasons.

The name that should be top of that summer wishlist is Julian Brandt. Firstly, reports in Germany suggest there’s a £22million release clause in his deal. Rumoured to be a Real Madrid transfer target, the Bayer Leverkusen man was on Liverpool’s radar after Klopp’s appointment.

However, a lot has changed in the past two years. Salah is now one of the best forwards in world football while Brandt is thriving in a Leverkusen side as the number eight, far cry from the winger he was when the Reds first scouted him.

But one thing is for sure, Klopp will have been keeping tabs on a player he’s reportedly a ‘big fan’ of. And with Liverpool in the market for the type of midfielder Brandt now is, it seems like the ideal time to make that move.

The Reds lack a creative player in the middle third. That may sound dramatic given Liverpool have scored 70 Premier League goals this season, with a per 90-minute average of 2.25, and only Manchester City can boast a better record.

But during Klopp's tenure at the club, his side have always had a player who can play that free eight role in midfield. Every season apart from this one.

The sort of player who can feature in a midfield three but can also push on when the team have possession to make an attacking four.

Adam Lallana did it during the 2016/17 season. Alex Oxlade-Chamberlain was the man for the job last season after Philippe Coutinho's departure. Not only do they add goals but, perhaps even more importantly, they also add guile to an otherwise fairly safe middle third combination.

The sort of thing that helps turn draws into victories. Draws have allowed Manchester City to catch up in the title race.

Nobody expects a team to win every single match but only Wolves in the top ten have drawn more matches than Liverpool this season. Some draws are a good result, like the ones away to Arsenal and Chelsea, while a point against Manchester City is never a bad thing.

However, it's when Leicester City, West Ham United, an out of form Everton and an injury-hit Manchester United side are able to take points off Liverpool that the Coutinho shaped void in the squad becomes apparent.

With Naby Keïta having a stop-start, injury-ravaged campaign and Lallana missing chunks of the season again, there's no unpredictability in the middle third. 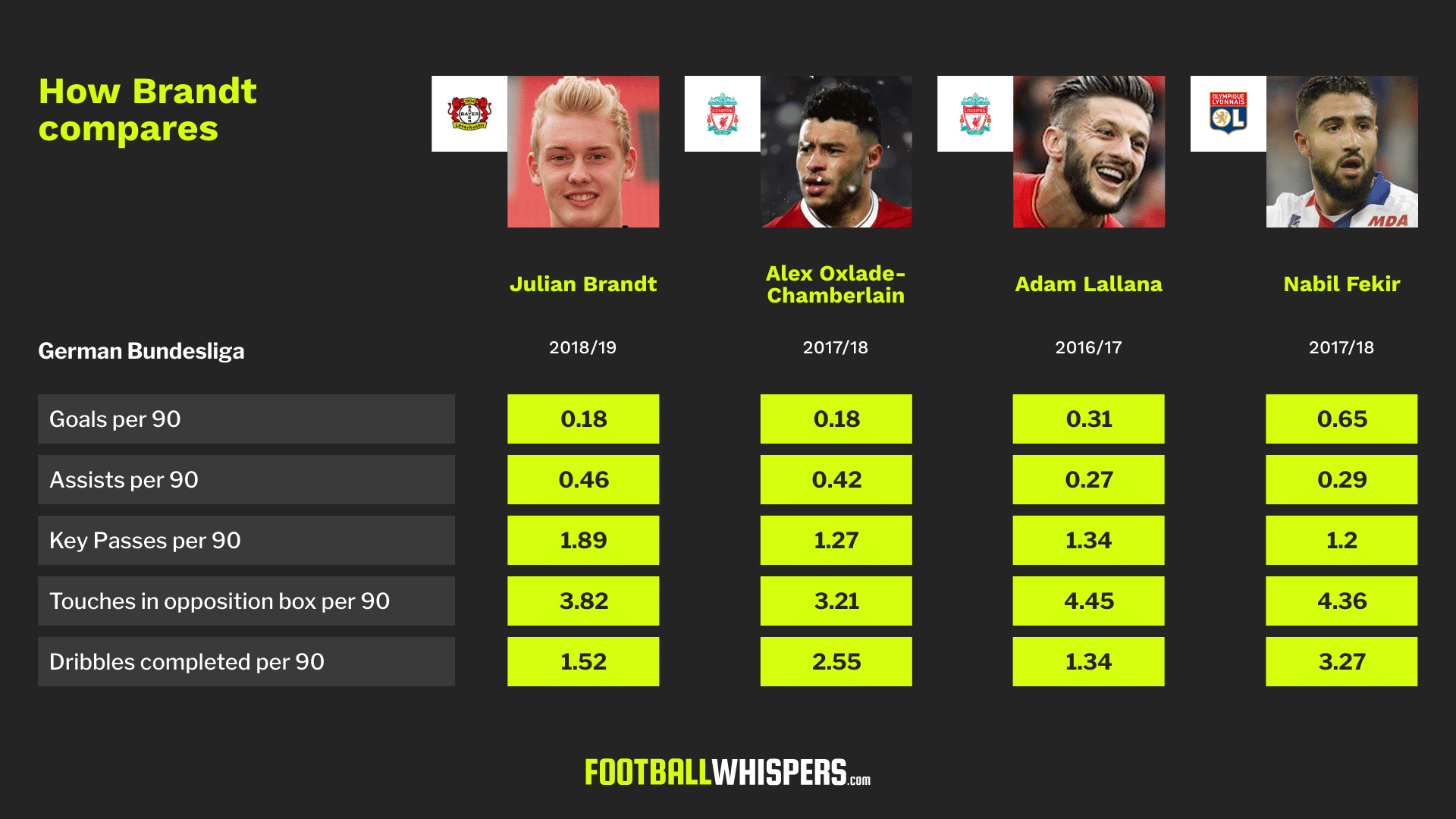 Brandt addresses that issue. As shown in the graphic above, he's not the most prolific goalscorer, just 0.18 goals per 90 this season, but that is exactly the same as what Oxlade-Chamberlain averaged last term.

It's well shy of the 0.31 Lallana averaged during the 2016/17 campaign and pales in comparison to the 0.65 former Liverpool transfer target Nabil Fekir managed during the 2017/18 season. But Brandt wouldn't be arriving primarily for his goals, however, he did score nine in the Bundesliga last term so does offer that threat. 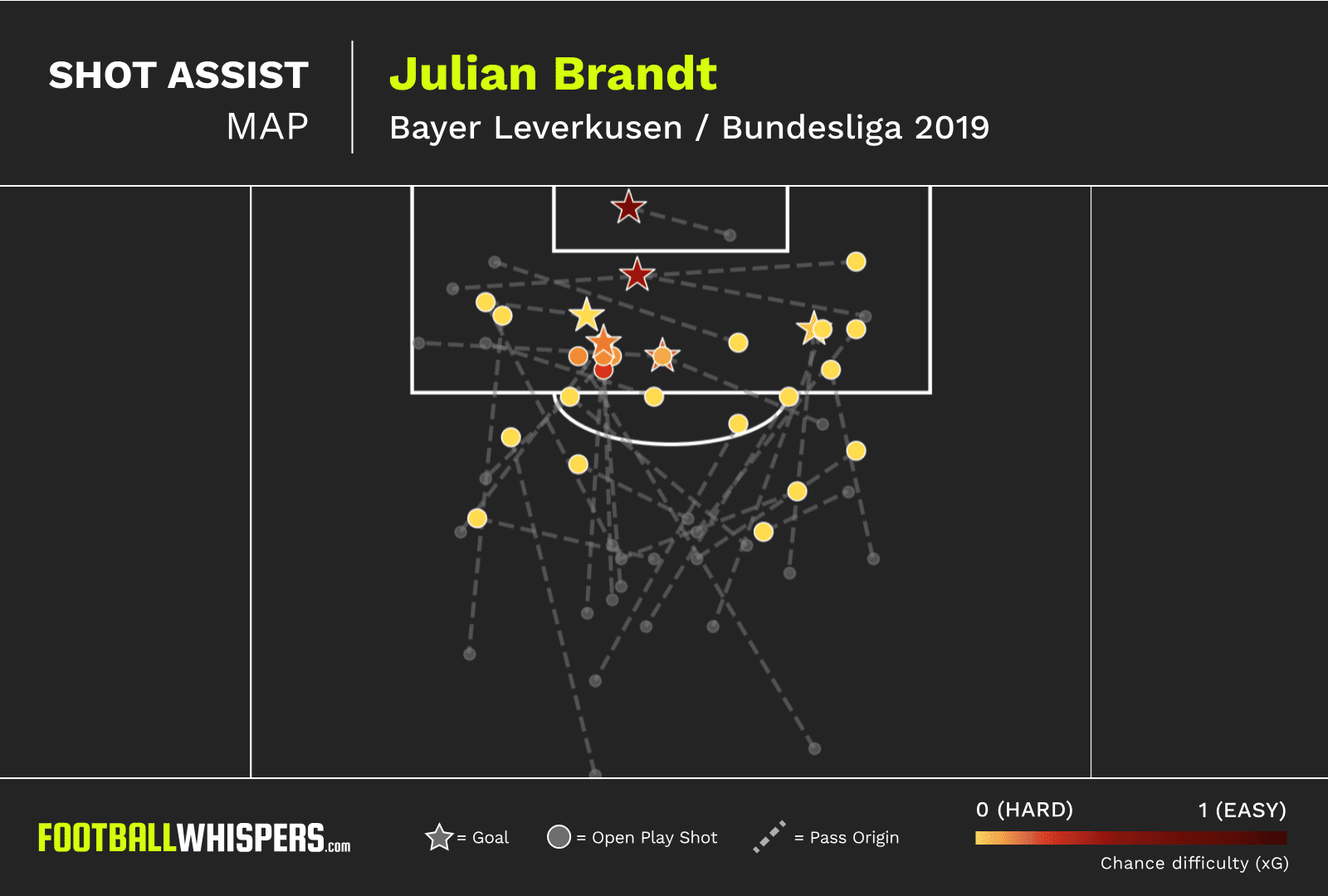 His real value would be in terms of assists and key passes. He's averaging an assist almost every other game this season in the Bundesliga and only Oxlade-Chamberlain gets close to that.

Furthermore, Brandt's expected goals assisted average is 0.34, meaning the output is sustainable. For added context, his xA90 is higher than that of Lallana and Xherdan Shaqiri's combined (0.22).

As you can see in the graphic above, which shows all of his shot assists in 2019, he's creating high-quality chances on a regular basis. 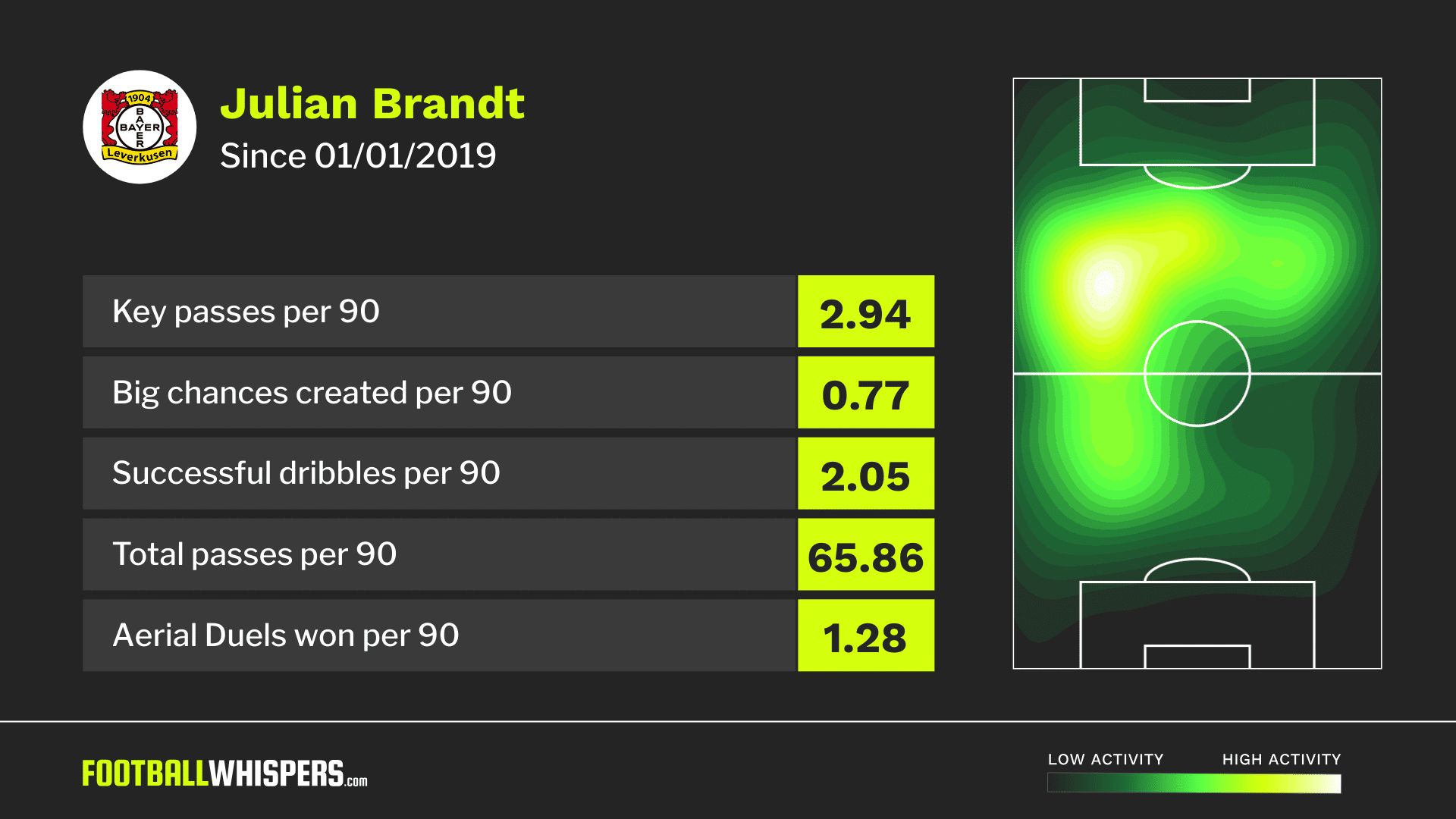 Since the turn of the year, when manager Peter Bosz made the switch, he's increased all of the above stats.

Key passes have risen from 2.16, big chances created have more than doubled from 0.33, successful dribbles are up from 1.38, he's averaging 20 more passes on a per 90 basis and he's putting his 1.83m frame to good use by winning 1.28 aerial duels, 0.38 more than he managed in the first half of the season.

Brandt ticks far too many boxes not to be on Liverpool's wanted list this summer. With over 200 appearances for Bayer Leverkusen and 23 caps for Germany, the 22-year-old has the experience to go along with his potential and ability.

While there's an argument the Reds would then have too many midfielders if the Bayer No.10 called Anfield his home, a number of them are versatile enough to play elsewhere. It would give Klopp countless options and make Liverpool more dangerous than ever. Brandt could be this summer's biggest bargain.