Bayer Leverkusen flyer Julian Brandt is being strongly linked with a move to Liverpool, as Jurgen Klopp looks set to raid the Bundesliga once more.

On the latest episode of Football Whispers TV, journalist Patrick Barclay was in the studio to give his thoughts on the Reds' recent form and their potential swoop for the 20-year-old winger.

“This is the problem with the high-energy teams,” Barclay said. “When the energy level drops then results get worse. We saw it with Tottenham Hotspur in the last three to four weeks of last season and we’re seeing it a little bit with Liverpool now

“It’s not so much that they don’t run anymore, I think it’s mental: you find it harder to unlock a defence, to find ways of getting through.

“That’s certainly what’s happened to Liverpool. They’ve had plenty of possession in the last two home games but they haven’t been able to break the teams down.

“That’s why it’s so important that Coutinho’s staying but they do still need somebody to come in, and that’s why I think Brandt is so highly rated as a target.”

What's Up At Liverpool? | S01 E08 | FWTV by FootballWhispers

According to the Liverpool Echo, the Reds appear to have settled on the 20-year-old German attacker having reportedly seen bids turned down for Borussia Dortmund's Christian Pulisic, as well as being warned off a move for RB Leipzig’s Emil Forsberg.

Brandt's potential move to Liverpool could have legs, as it's currently rated at 3.1 out of five on the Football Whipsers Index.

Sadio Mane, who signed for a reported £33million in the summer, hit the ground running and is the club's top scorer with nine goals. He’s added a layer to the Liverpool attack that they had lacked in recent years but now there’s a chance they are too reliant on the Senegalese speedster.

In his absence Liverpool don’t have that explosive pace, they don’t have a player with comparable movement and the alternatives don’t offer as much protection to the right-back as the former Southampton man. The replacements used – Daniel Sturridge, Adam Lallana, Sheyi Ojo – don’t share enough similarities with the 24-year-old for him not to be missed.

Klopp can’t sign a like-for-like replacement because that limits him. It shouldn’t be one or the other. Whoever the German opts to sign in attack will have to be able to play alongside Mane as well as in place of him.

Brandt could do just that.

Liverpool would have no problem paying the £20million it would cost to pry the player away from Germany. But with his current deal expiring in 2019 they may start negotiations off a little lower. He currently earns a reported £19,000-per-week and could see his wages trebled if he linked up with the Merseyside outfit.

Emre Can moved from Bayer Leverkusen to Liverpool in 2014 and started off on a salary of £55,000-per-week and there’s no reason the same couldn’t happen with Brandt. 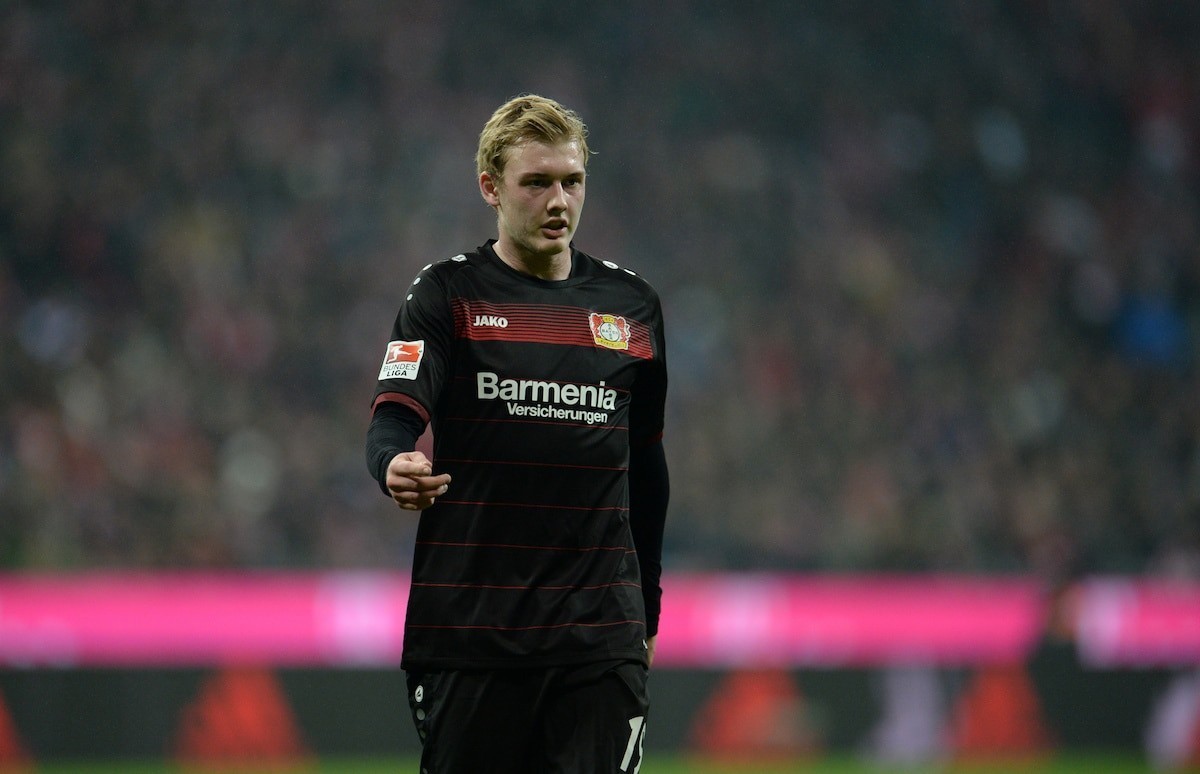 Despite the fact he won’t be turning 21 years old until May, the Germany international has already featured in over 80 Bundesliga matches and has 17 goals and 13 assists to his name. If he was English the media over here would be calling for him to captain the national side at the 2018 World Cup. But in Germany these talented youngsters are afforded much more time to develop and it’s exactly what he’s needed.

There are periods in which he has a poor run of form and looks off the pace. Consistency comes with age though and he’s not criticised for it. He then hits a run of form which sees him become a major influence in the Bayer Leverkusen side.

Last season he scored in six consecutive Bundesliga matches, becoming the youngest player since German legend Gerd Muller to do so. In the nine matches prior to the winter break in the Bundesliga he had three goals and five assists.

When he plays himself into form he’s a joy to watch, he’s frighteningly good and he’s only 20 years old.

Stylistically, there are hints of Mario Gotze and Marco Reus. The thought of him being coached, developed and nurtured by Klopp should make opposition fans uneasy. 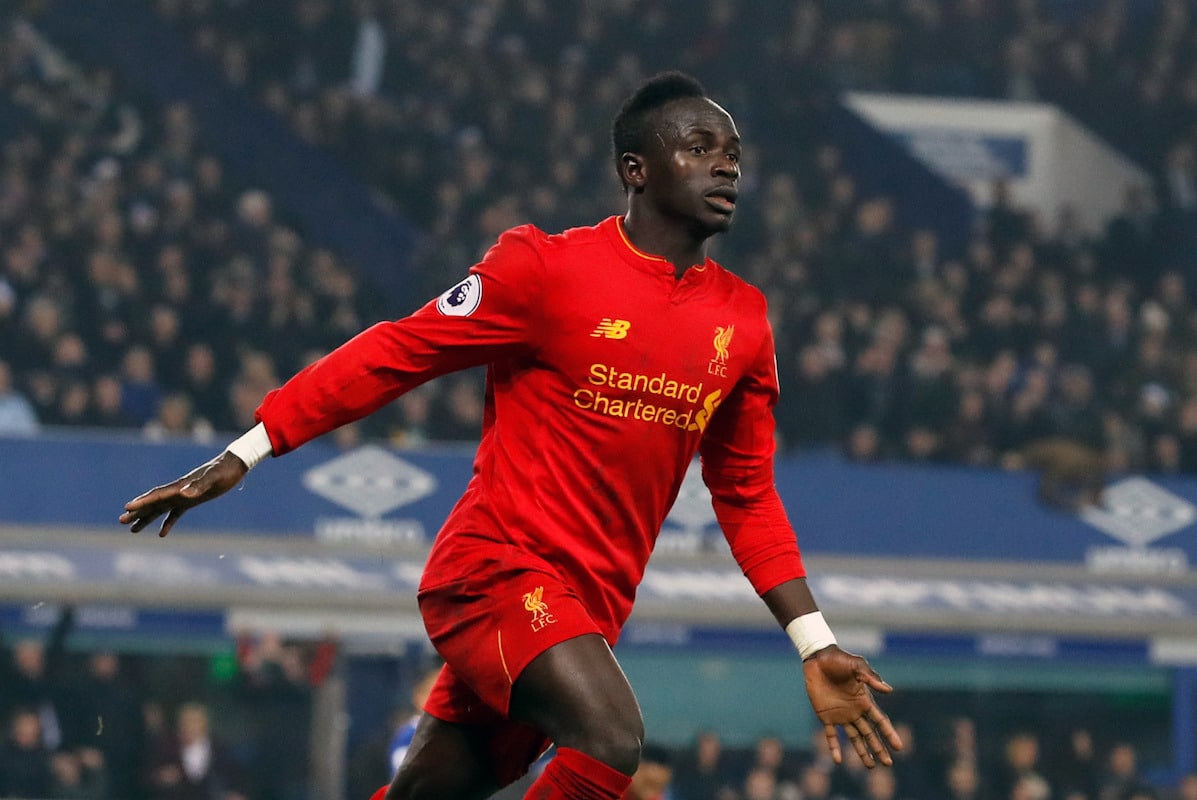 In terms of playing in place of Mane, he may not be as quick as the current Liverpool player but he’s no slouch. Only Philippe Coutinho (2.5) and Mane (2.5) complete more dribbles than Brandt (2.4) per 90 minutes. He’s a goal threat from a wide area, he’s comfortable playing anywhere behind the striker and more importantly he looks to get beyond the striker.

In the past people accused the Reds of having too many creators and not enough finishers. Too many of those players who want the assist instead of the goal. Adding Brandt to the squad would further dismiss this notion. 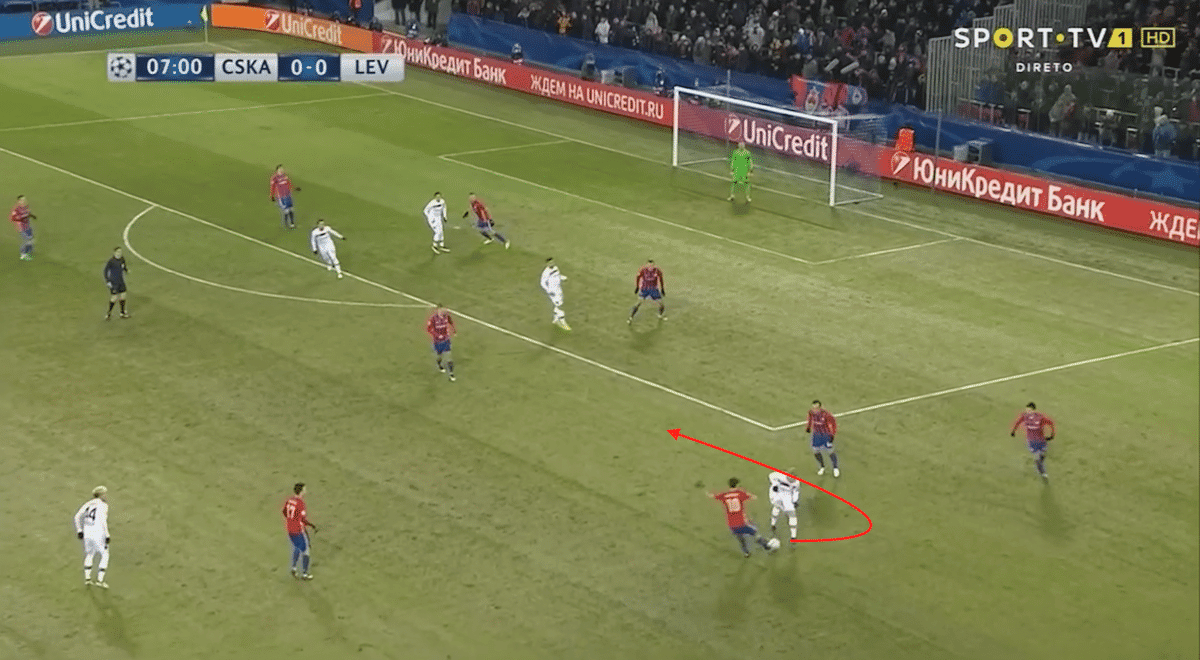 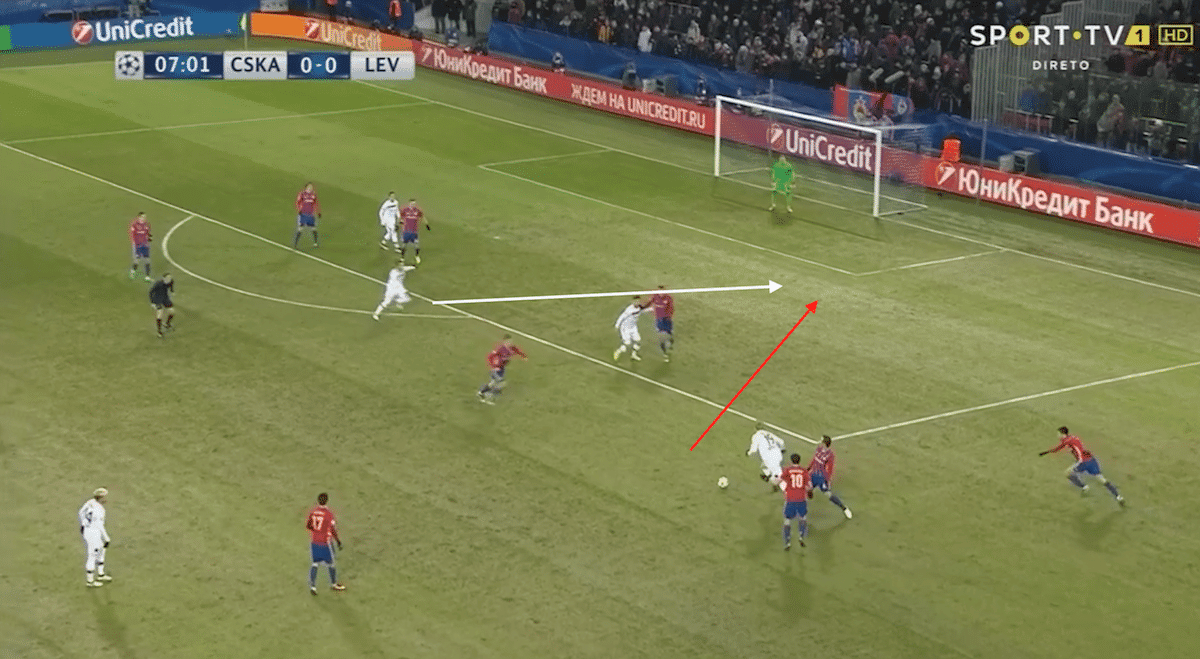 In the pictures above, taken during Bayer Leverkusen's Champions League match in Russia, you see just how well Brandt does when in enclosed space. Having avoided two CSKA Moscow players initially, who seem to have repelled him back towards his own goal, he’s faced by a retreating CSKA player who looks to swipe the ball away. However, Brandt rolls the ball and the man, avoids being closed down, and then plays a nonchalant pass into the path of Javier Hernandez.

It’s ridiculous how calm and composed he is after skipping past three players to be able to thread through a perfectly weighted pass like that. 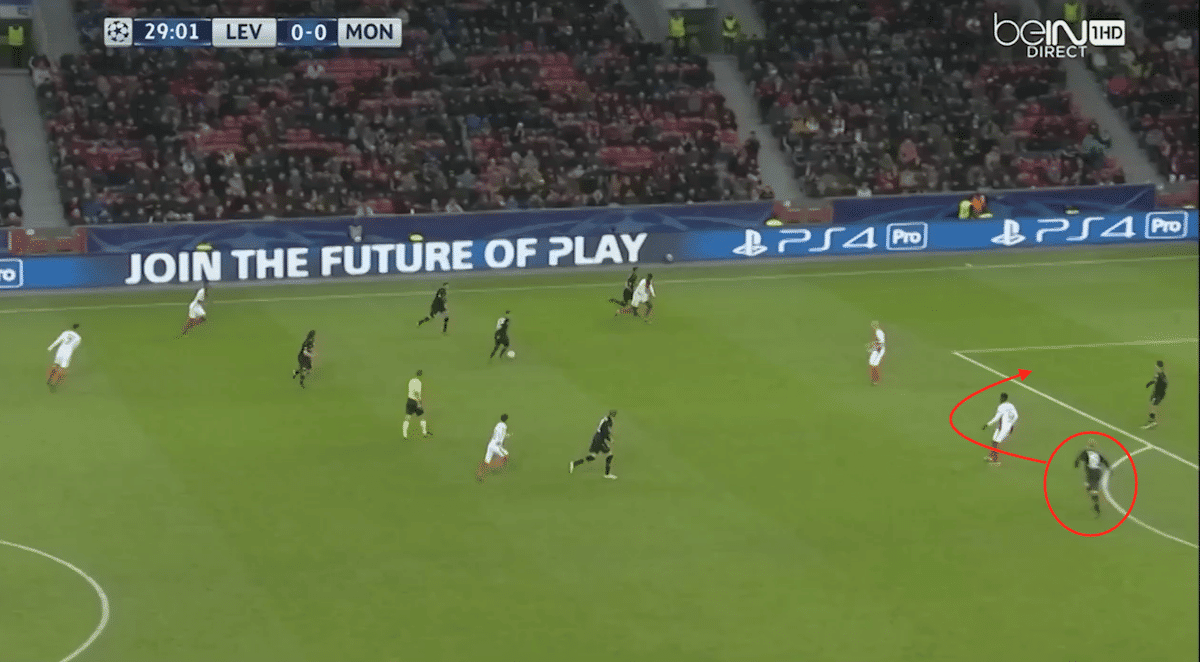 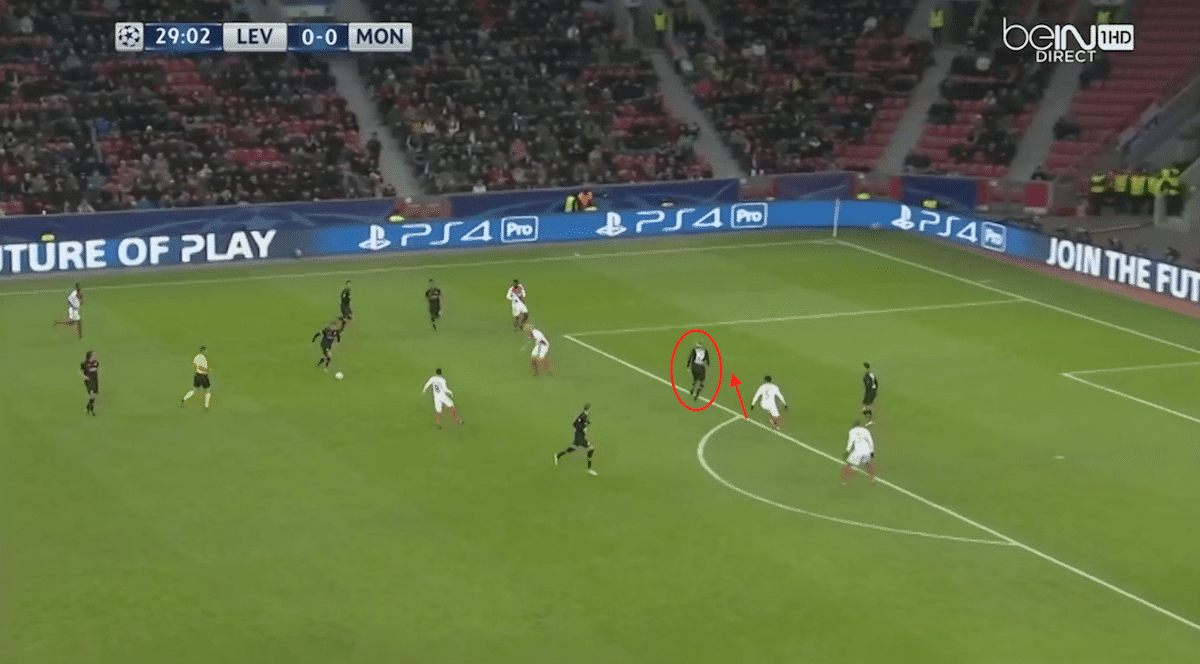 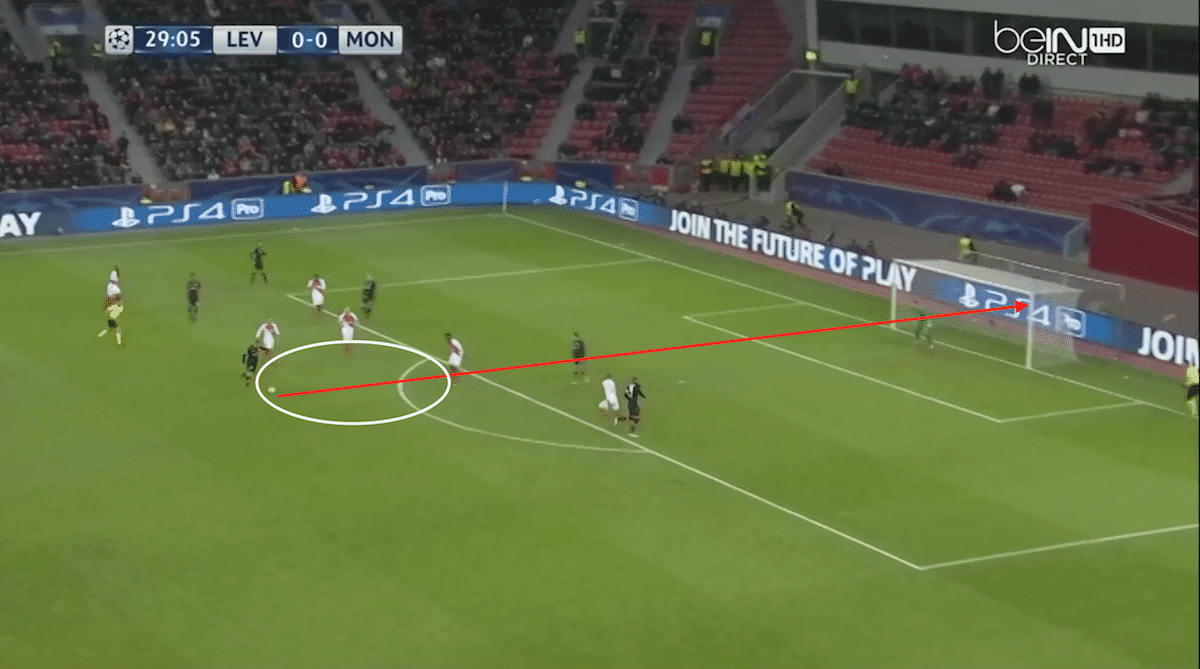 It’s the sort of thing that goes unnoticed but Brandt’s involvement in this wonder strike to open the scoring against Monaco is something the Liverpool attack have been doing all season. Off the ball running. It’s simple but as shown it’s so effective.

Brandt is circled in the first picture. He arcs his run across the path of the defender to ensure he stays onside. It’s this movement which drags the Monaco man because he knows if the ball is released to Brandt that he would be onside, despite their best efforts at playing a high line.

In the second picture you see play progressing centrally but the defender following Brandt has taken a step back and is going towards his own goal. As the man in possession lines up a shot the defender, who is now trying to get out to block the shot, has too much ground to make up and isn’t able to.

He’s afforded that extra bit of time and space because of Brandt’s initial run. 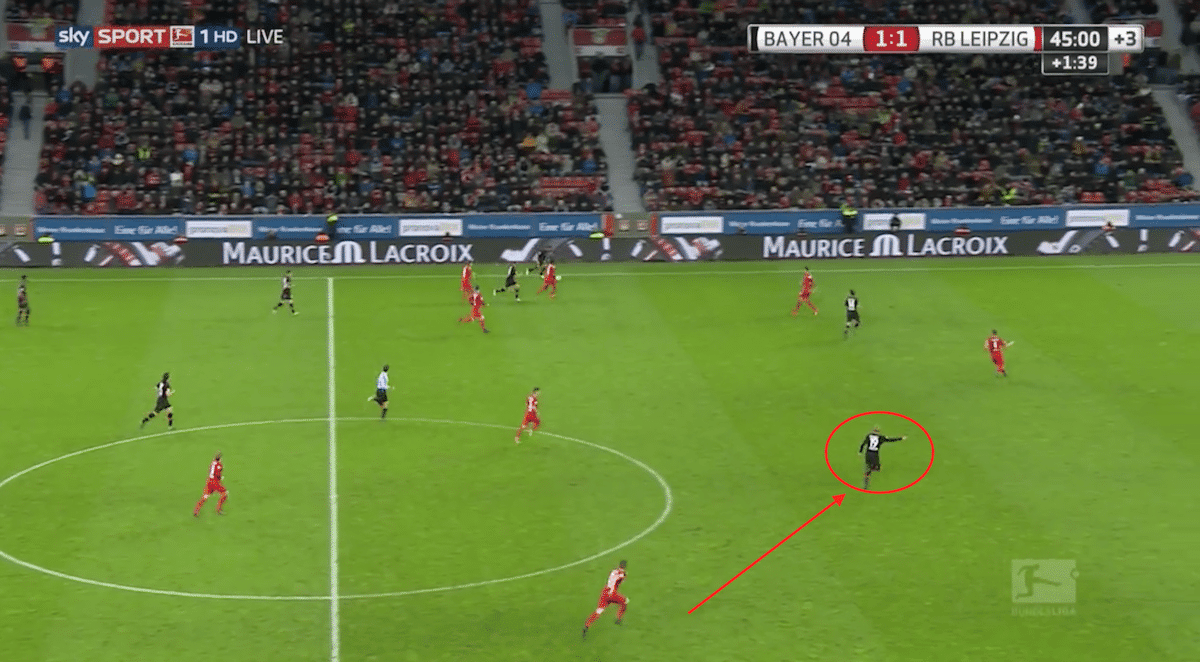 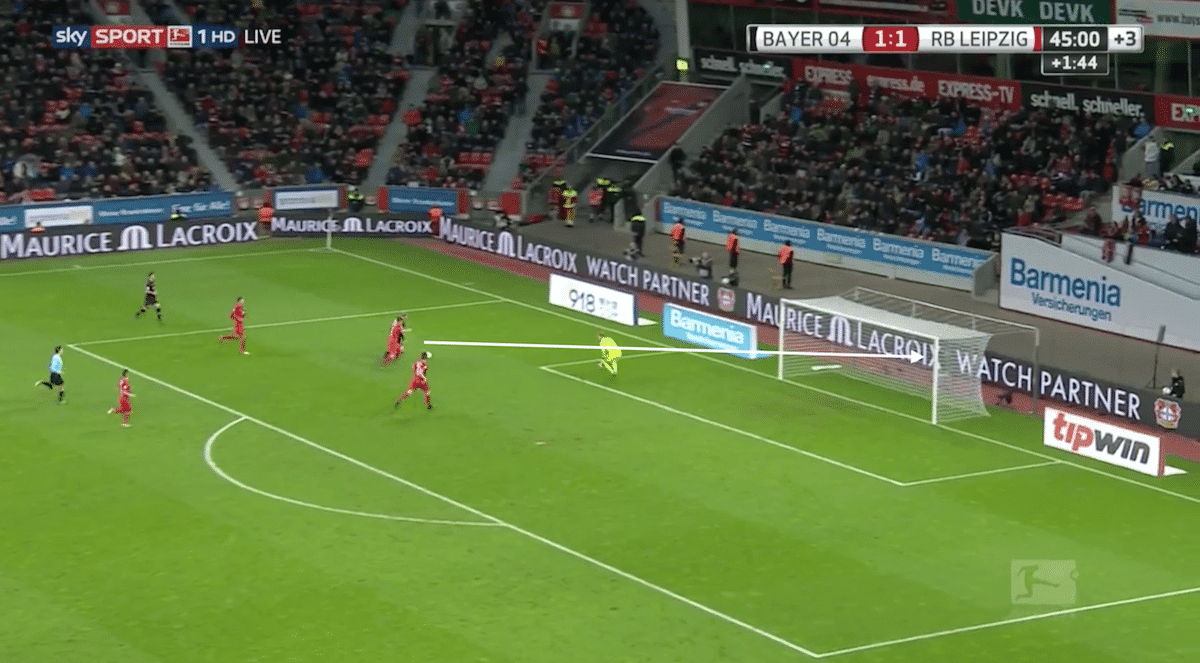 This time around it’s against RB Leipzig. There’s a turnover in possession on the Leverkusen left and Brandt is immediately looking to exploit the space. He uses his pace to drift in from the right-hand side across to a more central area and positions himself to get on the end of a lofted pass. He then uses his strength to fend off the opposition’s defender before lashing the ball home with his weaker foot.

It takes just two pictures to show exactly what Brandt is all about. Pace, power, intelligence and a goal threat because of it all.

He’d improve the squad in the short-term and he’s a potential star player in the long-term. For £20million it’s a no brainer and Liverpool should move quickly before anybody else tries to jump ahead of them in the queue.

The latest episode of Football Whispers TV also covered the subject of what is considered success for Arsenal these days. Check it out here.