Plenty of players have been dubbed the ‘new Steven Gerrard’ over the years and all have failed to live up to their early billing. However, if 16-year-old Jude Bellingham's attention-grabbing displays in the Championship are anything to go by – that could be about to change.

The Birmingham City midfielder has bulldozed his way into Pep Clotet’s starting XI, starring in several positions for the Blues. His form hasn’t gone unnoticed either with Manchester United, Chelsea and Liverpool all keen on the teenager.

The Championship outfit are believed to want £30million for the gangly-looking 6ft powerhouse. On one hand, he could turn out to be a bargain if he lives up to his early potential. However, the added pressure of such a price tag could stall his progress, especially if he’s forced to bide his time.

For most Premier League clubs, spending such an amount on a player is the norm and is rarely considered a risk. But, thanks to his age, Bellingham is a gamble. And a big one at that.

With big risks come big rewards and this will no doubt be in the back of the minds of those interested in the Birmingham City No.22.

He exudes confidence and there’s a maturity to his game rarely seen in a player of that age. It was former Blues midfielder Jermaine Pennant who compared him to Gerrard. Speaking on Alan Brazil’s Sports Breakfast on talkSPORT, the one-time Liverpool winger was full of praise for the teenager.

“He’s a fantastic player. He reminds me of a young Steven Gerrard,” Pennant said. “He throws himself about, he can get up and down the pitch, he can score goals and assist goals, he’s got trickery. He’s a fantastic young player.”” 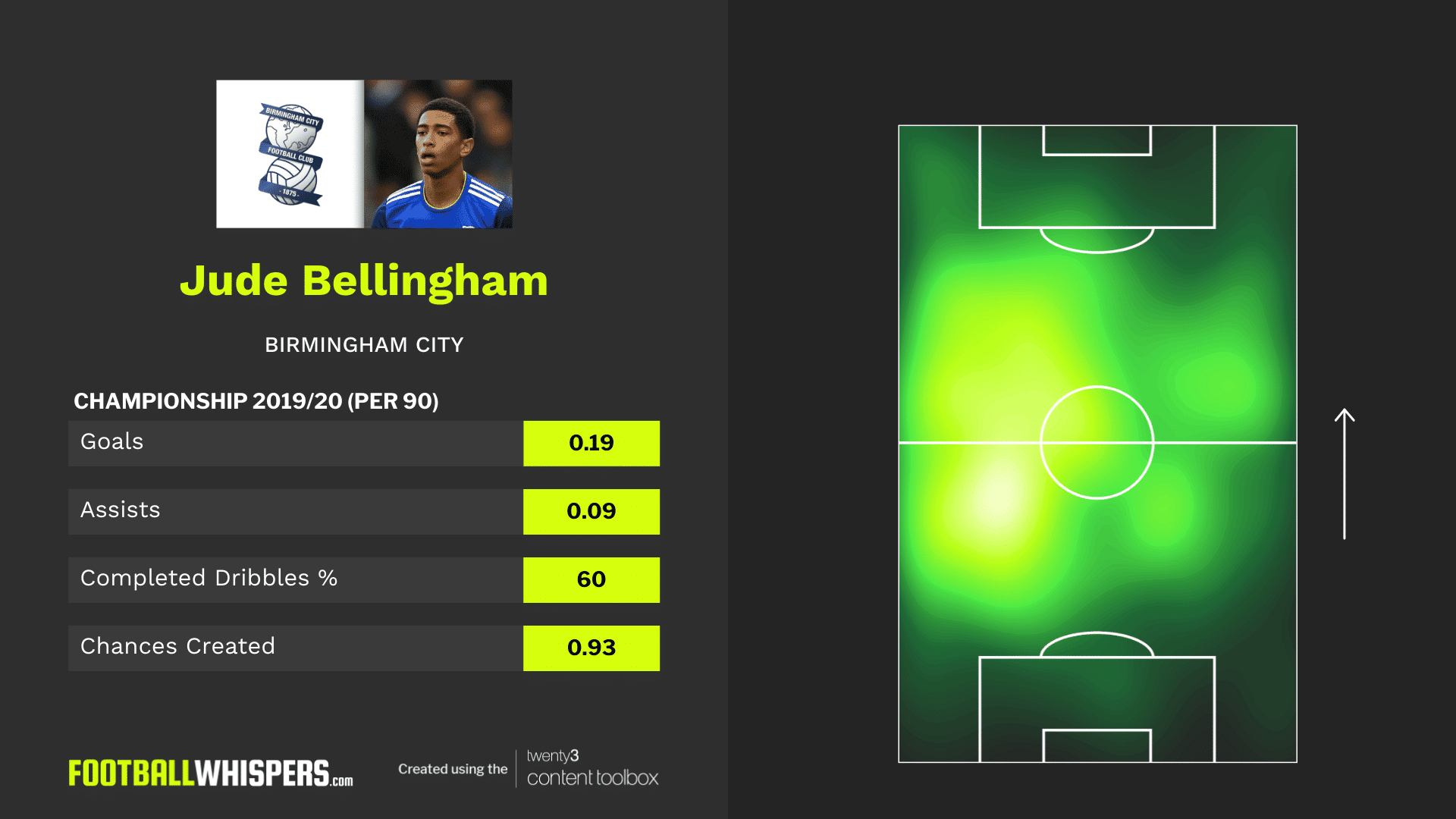 When you watch Bellingham, you can see the similarities with a young Gerrard. Arrogance has negative connotations but when the Liverpool legend first burst onto the scene at Anfield, he had plenty. Despite his age, he knew he was better than those he was coming up against. Even when he faced Roy Keane or a Patrick Vieira, he wouldn’t shy away from the battle.

That is exactly what Bellingham has been doing all season and why he’s now so highly rated. While he isn’t posting the numbers Dele Alli manages while turning out for MK Dons as a teenager – he hit seven in 37 during his first season and followed that with 16 in 44 before his Premier League switch – Bellingham has four goals and two assists in 30 appearances.

The fact he is still making headlines without scoring for fun is a positive. Using Alli as an example again, when the goals dried up for him his performances were put under the microscope.

He was creating but the fact he wasn't scoring as often meant he was performing poorly in the eyes of many. It was as simple as that. The England international was judged harshly because goals cloud judgement and change opinions. They turn 5/10 performances into 9/10s. They skew everything.

While Bellingham will no doubt want to add more goals to his game, the things he does aisde from putting the ball into the back of the net are, arguably, of even greater value to his reported suitors.

His return of 0.28 goals and assists per 90 is decent for a 16-year-old playing in a mid-table side. But what will interest teams most is his ball-carrying ability. Bellingham completes 60 per cent of the 2.55 of dribbles he attempts per 90. In terms of volume, he isn't in Eden Hazard‘s league but completion wise they aren't too dissimilar with the Real Madrid man beating his opponent 65 per cent of the time.

He doesn't shy away from that side of the game defensive game either. On average, Bellingham makes six ball recoveries per 90. He's winning more than half the tackles he attempts and regains possession in the middle third on 3.5 occasions. As evidenced in the heat map above, Bellingham gets about the pitch. The teenager is energetic and dynamic, qualities which aid him defensively and offensively.

He's far from the finished product but, at his age, he doesn't need to be. Under the right manager, and in the right environment, Bellingham could be developed into anything he wants. He has the skillset to dominate the middle third and the traits needed to play in wide areas. But it's his work rate that will take him far.

Bellingham, for £30million, would be a gamble but he could turn out to be a truly generational homegrown talent. Borussia Dortmund are rumoured to want £120million for Jadon Sancho. The Birmingham man could reach those levels, and for a fraction of the price.