Despite the time and effort poured into crafting his own winning machines at Manchester United, Sir Alex Ferguson was not afraid of admiring other teams.

He respected the masterpiece Pep Guardiola crafted at Barcelona. After all, his United had been comprehensively outclassed by the Catalans in not one, but two Champions League finals. He also had great admiration for Ottmar Hitzfeld's Bayern Munich and Marcello Lippi's Juventus.

These were sides Fergie appreciated and managers he respected.

And while he didn't always see eye-to-eye with Sven-Göran Eriksson – the pair famously fell out over Wayne Rooney‘s inclusion in England's 2006 World Cup squad – it's safe to assume the Scot appreciated what his Swedish counterpart built at Lazio.

And that is because Ferguson tried to sign a number of Eriksson's players.

He chased Chilean striker Marcelo Salas when he was still at River Plate. United, though, refused to cede to River's demands for £12million for El Matador.

He was also a noted admirer of Alessandro Nesta, only to be put off by the Italian's utterly abysmal Old Trafford audition. With Fergie in the stands of the Stadio Olimpico, the usually rock-solid centre-half crumbled spectacularly in the Derby della Capitale, reduced to a quivering wreck by Vincenzo Montella's stunning 24-minute hat-trick.

But one player he did get his hands on was Juan Sebastián Verón. The Argentine joined the Red Devils in the summer of 2001, fulfilling a lifelong ambition to play in England after having sought the advice of Eriksson, with whom he enjoyed an excellent relationship at Lazio.

Verón was also heartened by the support United had shown him during his trial for allegedly obtaining an Italian passport after having used fake documentation. He was subsequently acquitted, freeing up a move to Old Trafford. 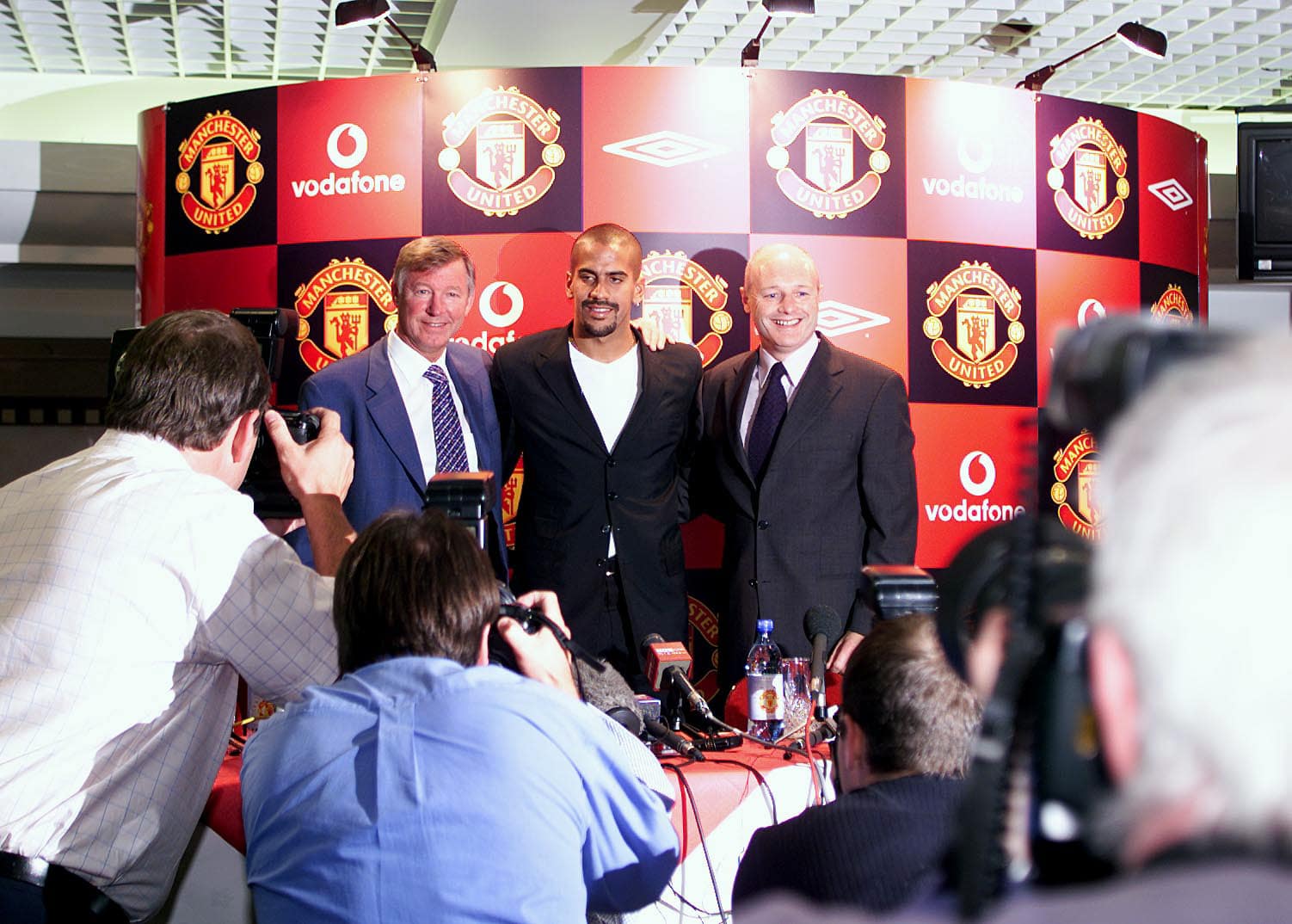 Verón's arrival in Manchester was met with considerable excitement. At £28.1million he was the most expensive player in British football history, surpassing the £19million United spent on Ruud van Nistelrooy, who also joined that summer.

At 26, he was approaching his prime but, most tantalisingly for United fans and Ferguson, he completed a fearsome midfield quartet alongside Roy Keane, David Beckham and Ryan Giggs.

Fresh from completing a hat-trick of titles and bolstered by £47million worth of attacking talent, only the bravest souls bet against Fergie's proto-galáctico's from prolonging their dominance of the English game.

But such courage in the face of Mancunian millions would have been rewarded. United proceeded to endure their worst season in the Premier League era, finishing third, ten points behind Arsenal having lost nine times (six of which were at home).

His kingdom crumbling, Ferguson often cut a cantankerous figure that season, forced to defend his players against the media's scathing assessments of United's lack of progress that season. And there was no altercation more explosive between manager and media than the late-season diatribe triggered by criticism of Verón.

It was early May and, with the tension palpable on the eve of Arsenal's visit to Old Trafford – a game forever etched in United fans' nightmares as the night the Gunners were confirmed champions inside the Theatre of Dreams – Ferguson let rip on the media assembled at Carrington.

“He is a f*****g great player” Ferguson raged. “And you're all f*****g idiots,” he said before storming out of an extraordinarily heated press conference. Ferguson had been particularly peeved by a report in a Sunday newspaper which claimed some of United's first-team confronted the South American after the club's Champions League semi-final exit to Bayer Leverkusen. 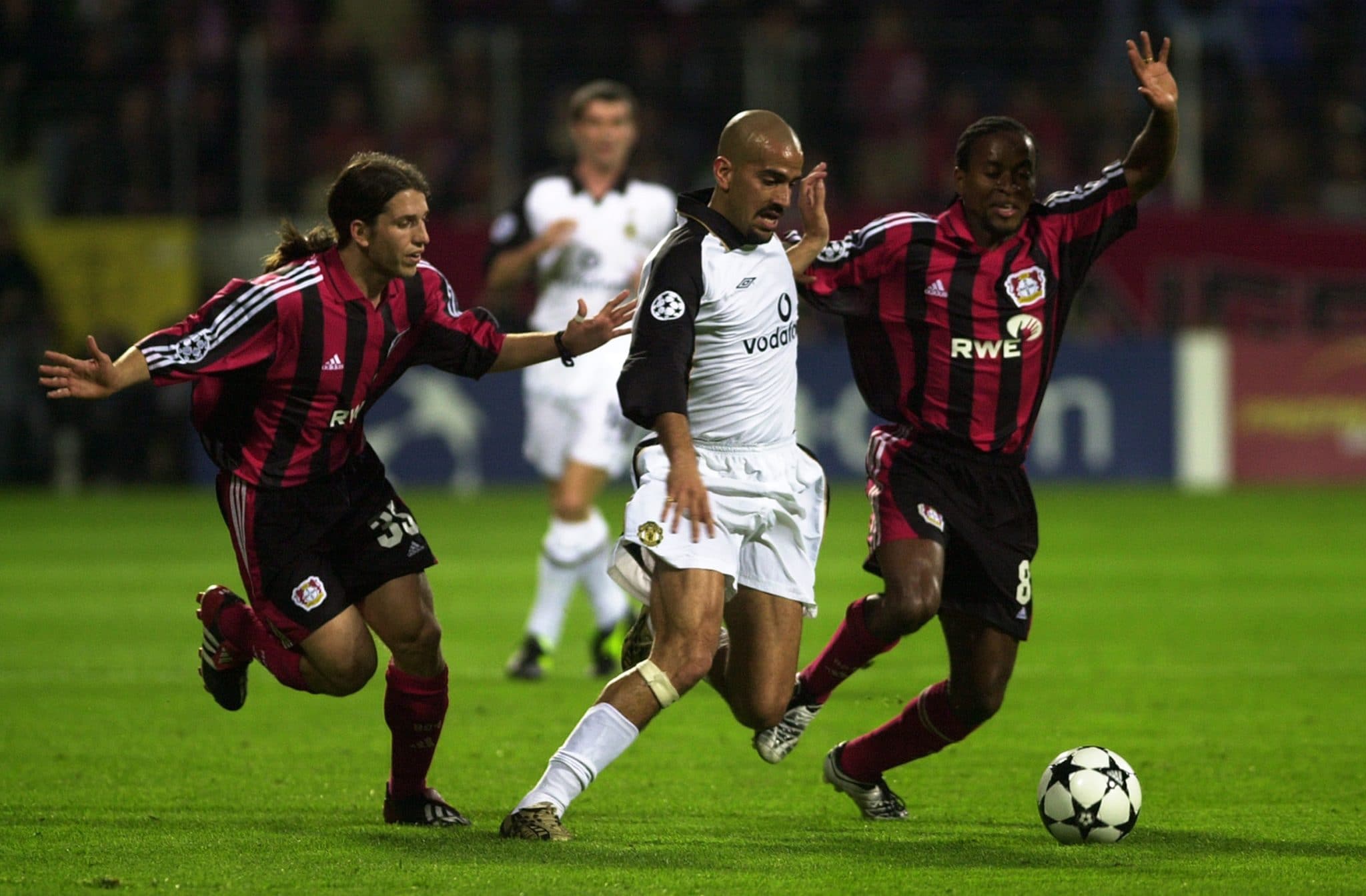 Ferguson called the report “nonsense, total lies” and suggested it was part of a carefully choreographed campaign by the media to unsettle Verón before the 2002 World Cup, where England had been drawn against Argentina in the group stages.

The United manager's vociferous defence was then undermined by Roy Keane, his captain, who, shortly after Ferguson's expletive-laden rant, gave an interview to MUTV in which the Irishman said that some players needed to “stand up and be counted”.

Contradictory remarks and conspiracy theories, however, muddled a fairly simple situation; Verón had not lived up to expectations. By the end of that turbulent season, his name could often be seen beside the word ‘flop'.

As the most expensive player in the division, scrutiny was always going to be intense. Yet, in the summer of 2002, just a year after he had been paraded around as United's record signing, there were growing reports that the midfielder was ready to pack his bags and return to Italy.

There must have been an embarrassment on Ferguson's part. After all, at Verón's unveiling, he said: “Every time we have bought this type of player, he has done wonders for us.”

But Verón did anything but. And nobody would have been as crushed as Ferguson. Although he struggled with an achilles problem, the Argentine never fully adapted to the English game.

He had attracted Ferguson with his sublime displays at the heart of the Lazio midfield, including a man-of-the-match performance in the 1999 UEFA Super Cup in which the Italians – then the reigning Cup Winners' Cup champions – edged United 1-0 in Monaco thanks to ex-Red Devils target Salas' first-half strike. 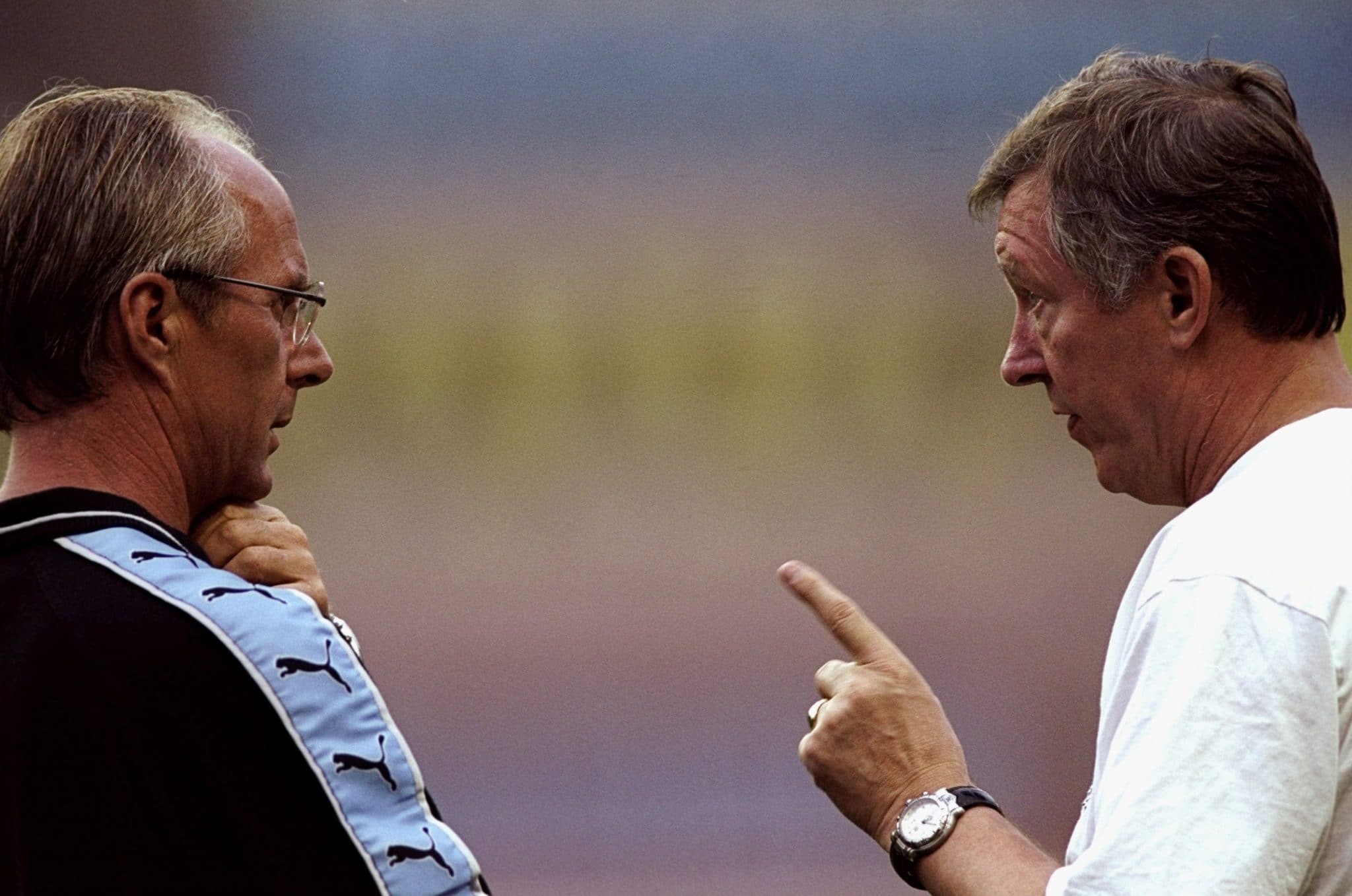 Having impressed under Eriksson at Sampdoria, Verón won a Coppa Italia and UEFA Cup double in his solitary year at Parma before reuniting with the Swede at Lazio. He enjoyed the form of his life in the Eternal City as the Biancocelesti captured a Serie A and Coppa Italia double.

Indifferent form during his sophomore year in Rome failed to dim United's enthusiasm.

Ferguson saw Verón as the missing piece in his midfield. Having been tactically outclassed by Vicente del Bosque and Ottmar Hitzfeld, of Real Madrid and Bayern Munich respectively, in consecutive seasons at the quarter-final stage of the Champions League in 2000 and 2001, the United boss realised he could not return the club to the peak of the European game playing his beloved 4-4-2.

He wanted to switch to a 4-5-1 and pack the midfield, particularly for European games. A midfield trio of Keane, Scholes and Verón, Ferguson felt, could be the right formula to end the 2001/02 season by lifting the European Cup in Glasgow.

At that time, of course, he was seriously considering retirement and there would have been no better way to bow out than as the king of Europe. Yet, while he ended up lasting another 11 years in the Old Trafford hotseat, Verón became an enemy just two years later after joining Chelsea.

United fans were disappointed, especially given how brightly the Argentine had shone during his first couple of months in England. Even before the season started, Seba lit up Old Trafford with moments of genius. He scored a spectacular volley during Ryan Giggs' testimonial, a match United lost 4-3 to Martin O'Neill's treble-winning Celtic.

He looked weary during his league debut – a 3-2 defeat of Fulham – having played in South America in the week leading up to it, but still exuded quality with his passing.  In his next outing, at Ewood Park, Verón sliced through the Blackburn Rovers defence to create Giggs' opener.

His first goal arrived two weeks later, in a comprehensive 4-1 defeat of Everton at Old Trafford. It was a beauty, too, exchanging a one-two with Keane before controlling with his chest and smashing home.

The Argentine scored in three out of his next five games, enough to win him the Premier League Player of the Month award for September. From there, however, he struggled. Not helped by Ferguson's tactics, he was often on the periphery of games, offering flickers of quality but never controlling the tempo as he had done in Italy.

The change in footballing culture was significant, too. Verón was left fighting an uphill battle after a pre-season packed with friendly games and a less intense training regime to the one to which he grew accustomed at Lazio.

His Achilles problem sidelined him for parts of the second half of his first season, but despite a harrowing experience at the 2002 World Cup where, under Marcelo Bielsa, Argentina failed to progress beyond the group stage, Verón enjoyed a more productive second year in England.

He found the net just twice in the league but drove United forward in Europe, scoring four goals in the first group phase and attracting plaudits for his accomplished displays. His goal at home to Olympiakos was special, a sumptuous chip over the goalkeeper having been slipped through by David Beckham.

But again, he struggled with fitness. Injury kept him out for seven weeks until he returned for the visit of Real Madrid to Old Trafford in the Champions League quarter-final second leg. Controversially, Ferguson selected him ahead of Beckham but Verón's tired performance and the England midfielder's two goals after replacing him did not reflect well on the Argentine.

Ultimately, the Verón experiment failed. Ferguson, having regularly deployed a 4-5-1 throughout the player's two years at the club, reverted back to a 4-4-2 in the latter stages of the 2002/03 campaign as United knocked Arsenal off their perch.

But despite his sparkling displays in Europe, Ferguson never quite figured out how best to use Verón. As Michael Cox points out in The Mixer, he was difficult to figure out. “He was neither a classic Argentine number 10, nor a deep-lying playmaker, while he was too languid to be considered a box-to-box player.”

Bielsa had deployed him in the holding role in front of a back three while Alfio Basile, who succeeded José Pékerman, played him as one of the slightly more advanced midfielders – alongside Esteban Cambiasso – in a 4-3-1-2, with Juan Román Riquelme, another Argentine midfield artist, as the enganche further up.

Ferguson was never going to be quite that radical in his departure from a 4-4-2, however, and, in the end, United were forced to cut their losses. Chelsea came in with a £15million and he was sold. He struggled to nail down a place under Claudio Ranieri and spent two years on loan at Inter Milan before heading back to Argentina.

Many United fans still wonder what Verón could have been, especially if La Brujita (The Little Witch) had rocked up to Old Trafford with his flashy earring and low-socked playmaking a few years later when continental tactical trends began to influence the English game.

Ultimately, it's a case of what might have been. He may not have lived up to his £28million price-tag but Verón was far from the disastrous flop he is often painted as. Nor was he the major reason for United's catastrophic 2001/02 campaign or their failure to reach another Champions League final.

It was a case of the right player at the wrong time. But still, what a player.