Juan Mata used to be magical.

At the age of 24, in 2012/13, he hit double figures in league goals and assists, something that only 26 players in Premier League history have done. Manchester City’s David Silva – a player in the argument for one of the league’s best-ever imports – has never done it. Neither has Mesut Özil.

It was Mata’s fourth season setting up ten or more league assists, two with Chelsea and two with Valencia. Silva, still, only has three. Mata's first two years at Chelsea were a good time for him; winning the Champions League in 2012 and claiming the club's Player of the Year award twice in a row.

And then José Mourinho arrived.

In 2013/14, the Portuguese manager returned to Chelsea and suddenly Mata was no longer trusted in the No.10 role. Oscar, who had shared the position since joining in July 2012, was now the main man.

“I'm not ready to ask Oscar to track opposing full-backs,” Mourinho explained two months into his first season back at Stamford Bridge.

“Brazil has more talented players in the No.10 position than any other country in the world, and he plays there for the national team, so I want to build with Oscar as my No10.

“I want the other two players, from the side, to adapt to that reality and learn how to do things they were not ready to do before.”

Mata was one of those players who “needed to adapt”.

The quality of his team-mates will be part of this. Mata moved from a Chelsea side who won the Champions League and finished third in the Premier League, to one who struggled along under David Moyes, then Louis van Gaal, before mixed success with Mata’s old friend Mourinho.

During his time at Old Trafford, Mata has rarely been used as a No.10. He has often been shunted out wide, crowbarred into a team rather than being given the freedom to shine. The opposite can be said for Silva, who has been the orchestrator of the City attack for several seasons.

Interesting, however, since 2016/17, the time which Football Whispers has detailed data for, Mata and Silva's styles of play have been virtually identical.

That spike in crossing for Mata, though, may be telling.

Here are the two players’ shot assists for this time period. David Silva almost never crosses the ball — if he sets up a shot from a wide position it’s in a very concentrated cluster on the left shoulder of the box. 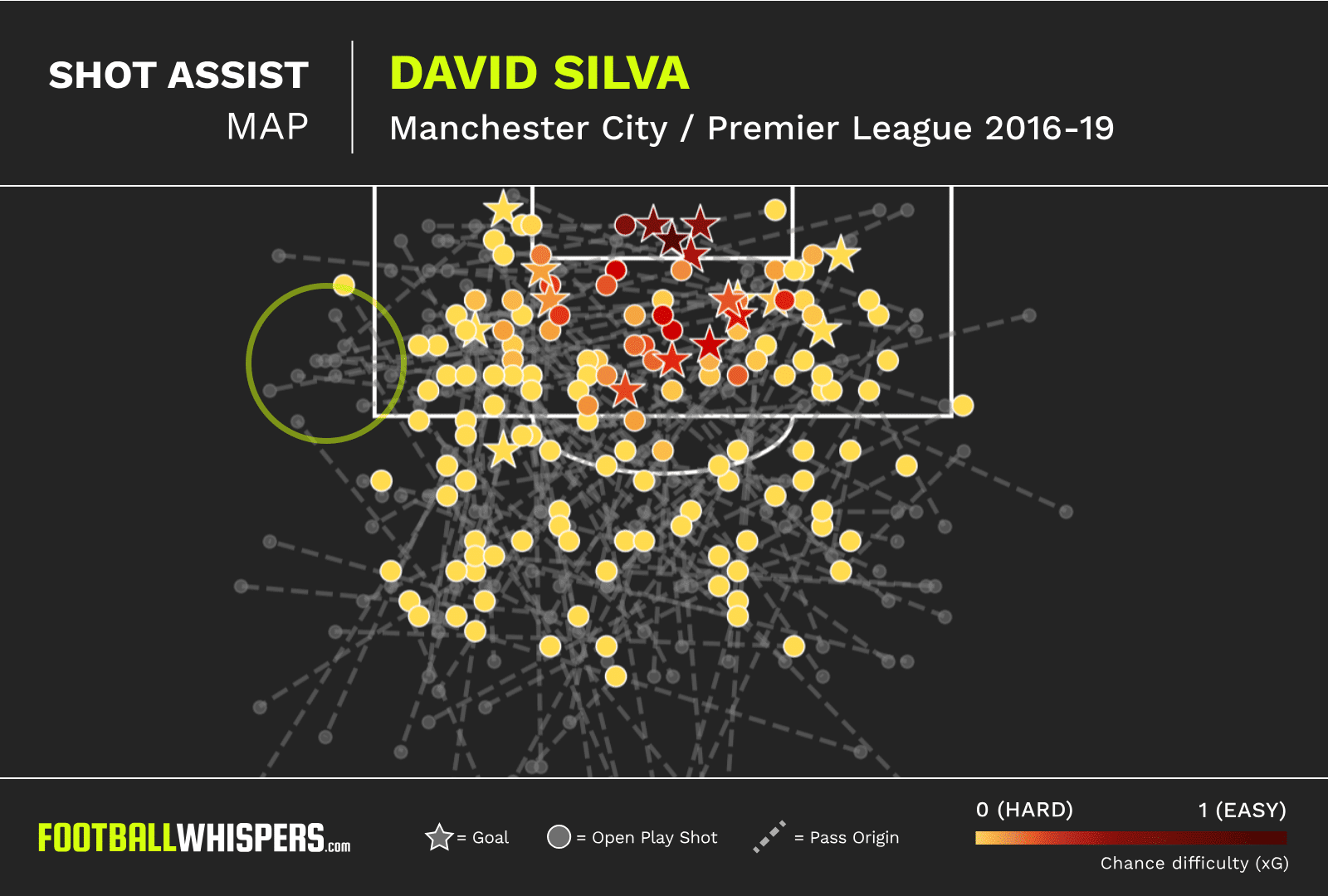 Mata, meanwhile, takes crosses. No longer is he a player who has the luxury of being able to play around the edges of the area, delivering short, incisive passes into the box. 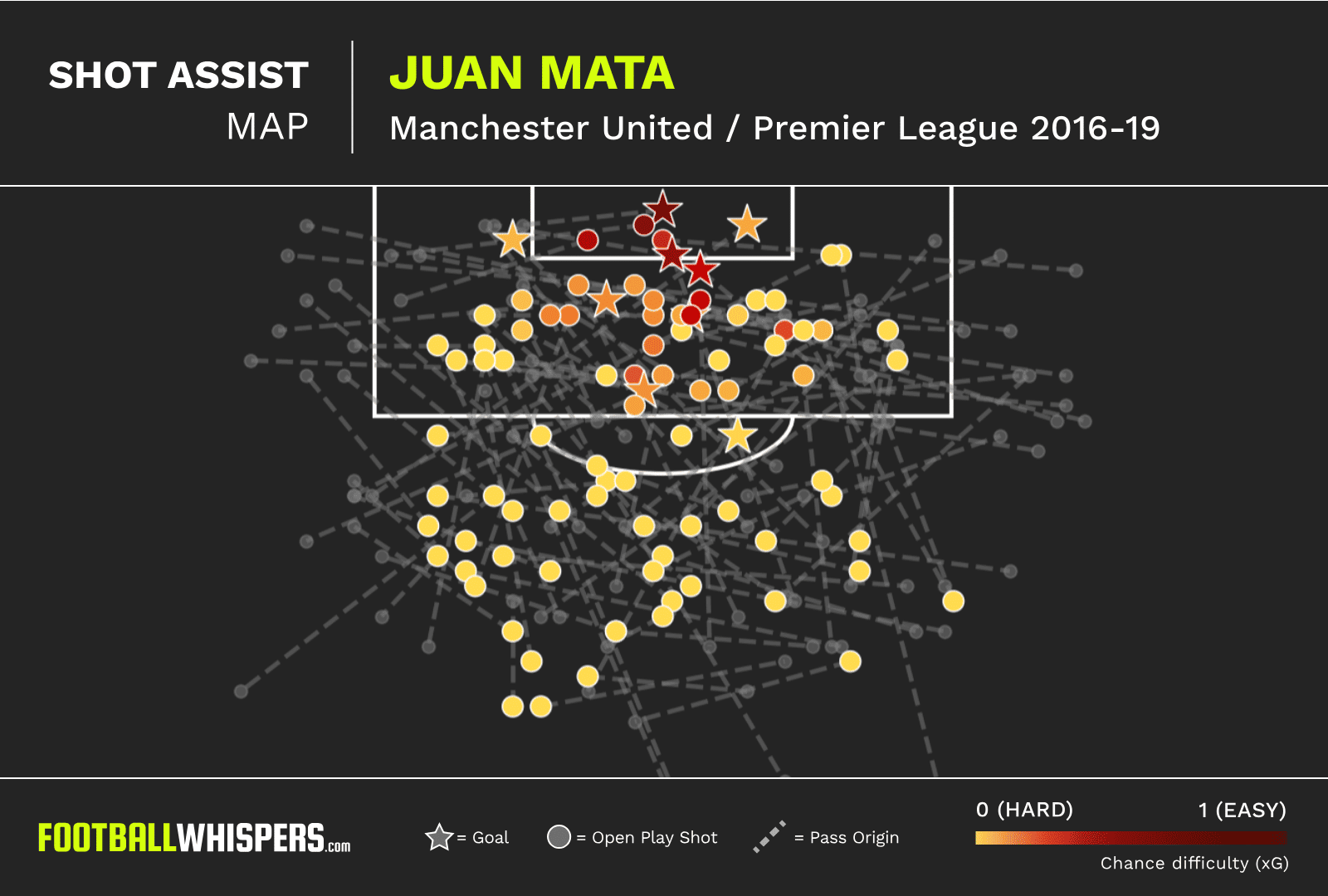 Cut off at the legs

A slightly wider game isn’t the only thing that may be holding Mata back.

When Mata was in his pomp at Chelsea, he was often a driving force towards and into the box. Now, he barely enters it.

Silva, never a player who ‘driving’ can be accurately applied to, has more of an influence inside the area than Mata. The Manchester City star had more than double (7.02) the touches inside the box per 90 minutes than his compatriot across the city of Manchester in the league (3.32).

It’s difficult to tell, or to prove, through statistics that a player is being wasted without having their peak or potential to compare to.

Mata is still a good player, but he’s a budget version of what he once was and what, for the past six years, he could have been.