Saturday's victory over Queens Park Rangers will have had Brentford fans wondering what might have been. It was the first time in over 50 years that the Bees had completed the double over Rangers, lifting the club to ninth in the Championship table.
They've left it too late to catch fellow West London rivals Fulham and mount a play-off push. But an encouraging end to this season should leave the fans confident of a top-six charge next time around. Dean Smith's side are among the most enterprising in the second tier and their young squad may be going places.
The inspiration behind the derby win at the weekend, and indeed a strong second half to the season, was a familiar one.
Jota was the match winner once again with a brace taking his goal tally to 12 in just 17 league starts since returning to the club at the start of 2017. It's no coincidence whatsoever that in that time Brentford have scored more goals than any other team in the division (44).
Had the Spaniard been at the club all season rather than going unused on loan back at Eibar, things could perhaps have been very different.

It was a shock when the winger returned to Spain at the start of last year, though injury played a significant part in his homesickness. With family issues to resolve, and following an ankle problem sustained on the opening day of the 2015/16 season, he asked to go back to his homeland to get to grips with it all.
That setback came after the 25-year-old had endeared himself to the Brentford support with a strong first season for the club. They picked him up in 2014 after Jota had played a pivotal role in Eibar's first promotion to the top flight, scoring the goal that sealed promotion and earning a place in the Segunda Division Team of the Season.
His impressive form continued as he took to English football and more pertinently Brentford's attacking approach quickly, scoring 11 league goals, whilst completing a dribble more often than any teammate in the 2014/15 campaign. It's his technique and intelligence in the final third that has set him apart as one of the Championship's most gifted talents this year though. 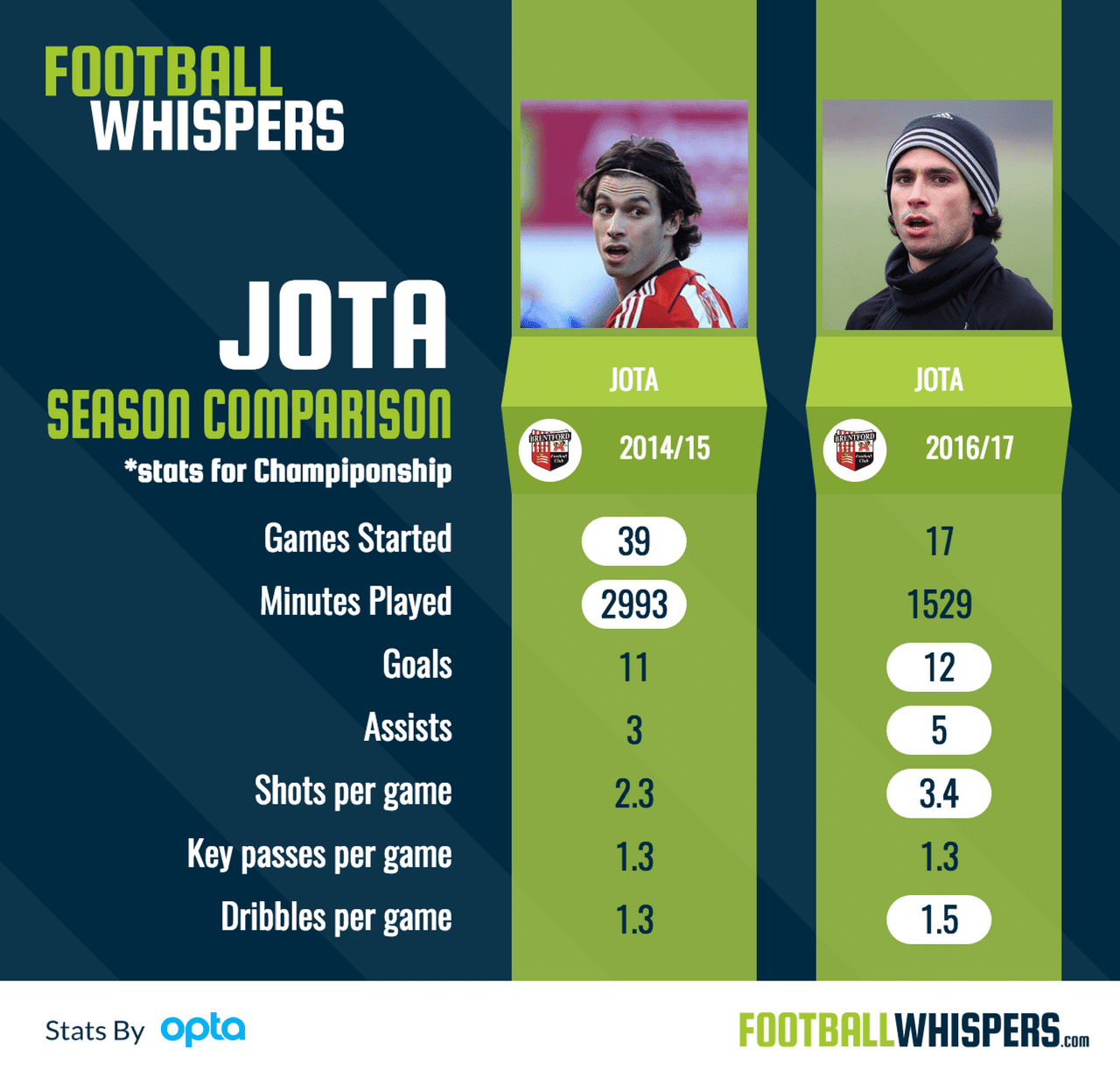 The winger took no time in reminding the fans just what he is capable of, scoring in only his second substitute appearance upon his return, while his appearance in the starting line-up against Aston Villa a week later had an immediate impact. Brentford romped to a 3-0 win as Jota had a hand in at least one goal in seven consecutive league games.
He's made a direct contribution to 17 of Brentford's 44 league goals this year, though his influence goes beyond that as he helps to knit the team together in advanced positions, bringing out the best in those around him.
Lasse Vibe in particular has profited from the speed at which Jota thinks and plays, with the Denmark international a smart forward himself. He's now able to rely on the Spaniard to make the most of his movement off the ball. Again, it's no coincidence that the 30-year old has scored 12 of 14 Championship goals this season since Jota returned to the side.
As a result Brentford have scored 39 goals in the 17 matches Jota has started this season – five more than they managed in 27 matches without him. Unsurprisingly, Brentford have won significantly more points per game in the Spaniard's presence this season.
An average of 1.76 points per game would have the Bees in the final play-off spot if repeated over 44 games. By comparison, had they continued at a rate of 1.22 points per game without him they would be down in 16th. 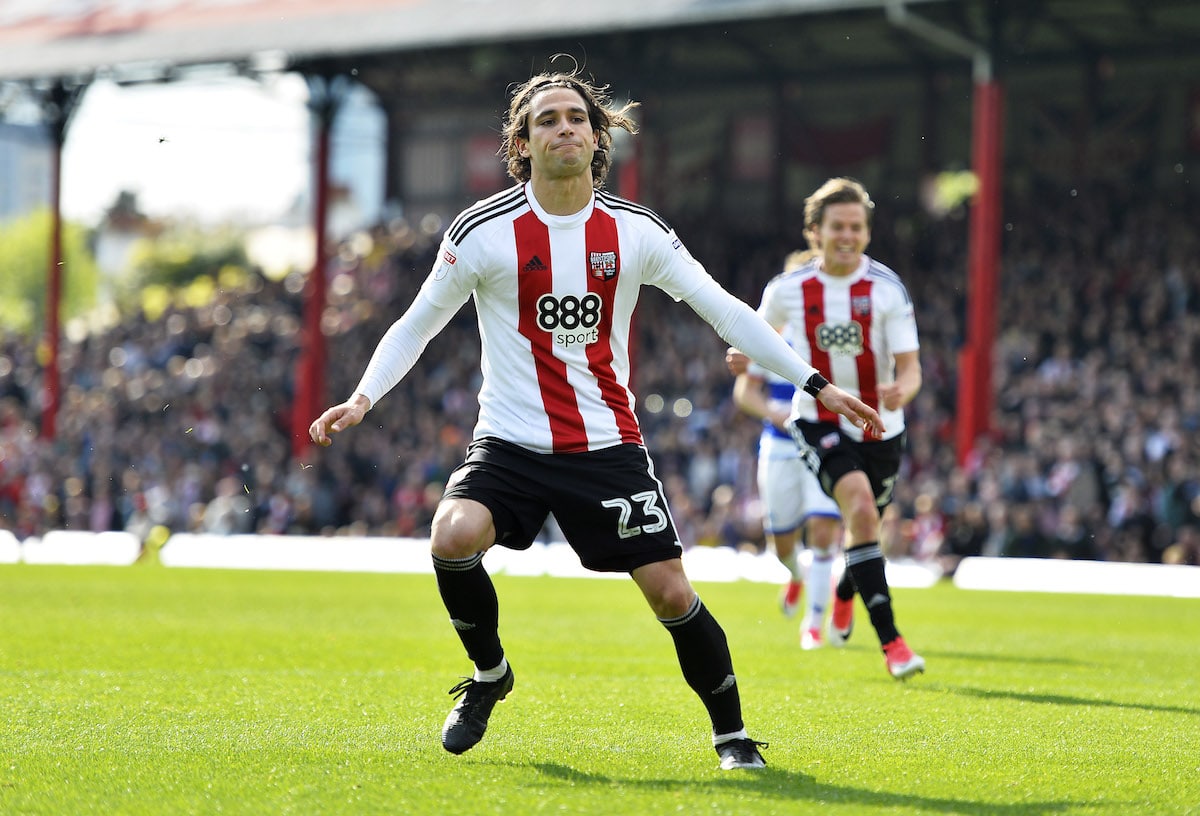 READ MORE: TIME JACK GREALISH LIVED UP TO HIS BILLING AT ASTON VILLA

His importance to this side both in the here and now and looking forwards is crucial then. His current contract is still set to expire in the summer, Brentford's number one priority should be making their option for a year extension on that deal official.
Smith is certainly confident that will come to pass sooner rather than later and there's no doubt whatsoever that Jota is enjoying his football in West London once more. He's brimming with confidence, averaging the most shots per game in the entire league (3.4), and is a joy to watch in this form,
Having confirmed that he will be flying his family to the capital in the summer, with his kids to carry on their education in England, the fans should be able to rest easy that their prized asset is going nowhere.
The Bees certainly can't afford to lose him if they are to kick on next season and trouble the top six and it's a target that is very much within their capabilities with Jota back in the fold. Indeed, Brentford may be a dark horse if the Spaniard can stay clear of the sort of injury that interrupted an excellent career in the Championship to date.