After the disaster of crashing out to Progrès Niederkorn in the UEFA Europa League qualifying, Rangers are trying to rebuild confidence in pre-season. Beating Sheffield Wednesday 2-0 at Hillsborough was a huge step in the right direction.

Pedro Caixinha’s team have drawn 1-1 with Marseille and beat Watford in a behind-closed-doors match before Sunday’s victory.

“The last three games were fantastic for us to get our cohesion, to get our ideas, to add everything in and get our confidence and our belief,” the Portuguese boss told the Rangers website.

The Gers lined up playing 4-4-2, and it was the much-maligned Josh Windass who opened the scoring before half-time.

Son of Dean Windass, the former Hull City and Aberdeen striker, the 23-year-old has a season to forget last term, after he was signed by Mark Warburton to become an attacking threat for the Glasgow club.

5 Transfers Sagas To Follow This Summer | FWTV by FootballWhispers

However, now, in a new-look system, Windass could be the idea player to threaten on the left of the midfield, give the Gers an attacking edge and become what could be considered a new signing for the Portuguese boss.

The right-footed winger, who came on for the last half an hour as Rangers lost to the Luxembourg side, couldn’t make an impact, and many would have thought the former Accrington Stanley star would be on his way out of the club.

A Hull City transfer target, the Tigers were linked with a £500,000 move, but after his goal and display against the Owls, they may have convinced to give him a second chance.

Playing 4-3-3 in the Europa League, Caixinha created too big a gap between the midfield and the attack, with the trio of Jordan Rossiter, Niko Kranjcar and Ryan Jack, all too similar in their approach.

Going with a 4-4-2 seems to suit the players more and with a key win – regardless of if being in a friendly or not – under their belts, they will go into the opening fixture against Motherwell full of confidence and a belief that the Progrès is well behind them, and that’s the attitude Windass should adopt for the new campaign.

In his 21 appearances for the Ibrox club, he may not have found the net, but he did pick up five assists, and he showed, on quite a few occasions that he has excellent vision and the ability to pull out some sublime passes.

Against Celtic, he found a pocket of space in the centre and James Tavernier made a darting run after playing the initial pass.

The midfielder superbly slips the ball in behind the Celtic back-line, taking out three players in the process.

Tavernier is in, and the defender is able to pick out Kenny Miller inside the six-yard-box to give the home side the lead.

Although they would go on to lose the game 2-1, it was a great example of the vision and quality Windass possesses in the final third.

Recently, playing 4-4-2 went out of fashion after years of success in the English game, but as French champions Monaco charged to success using that formation, they showed it can be very effective.

They are under the guidance of Leonardo Jardim, so maybe the same tactics can be utilised by Caixinha to get the best out of Rangers and Windass.

In the old English style, it was two wingers and two central options. With the wide players pushing down the by-line, trying to get in crosses, leaving the middle of the park to the forwards and midfielders.

Now, you can play No.10 type options wide, they look to pick up the ball and push inside, allowing both the forwards and full-back utilise the wide areas. 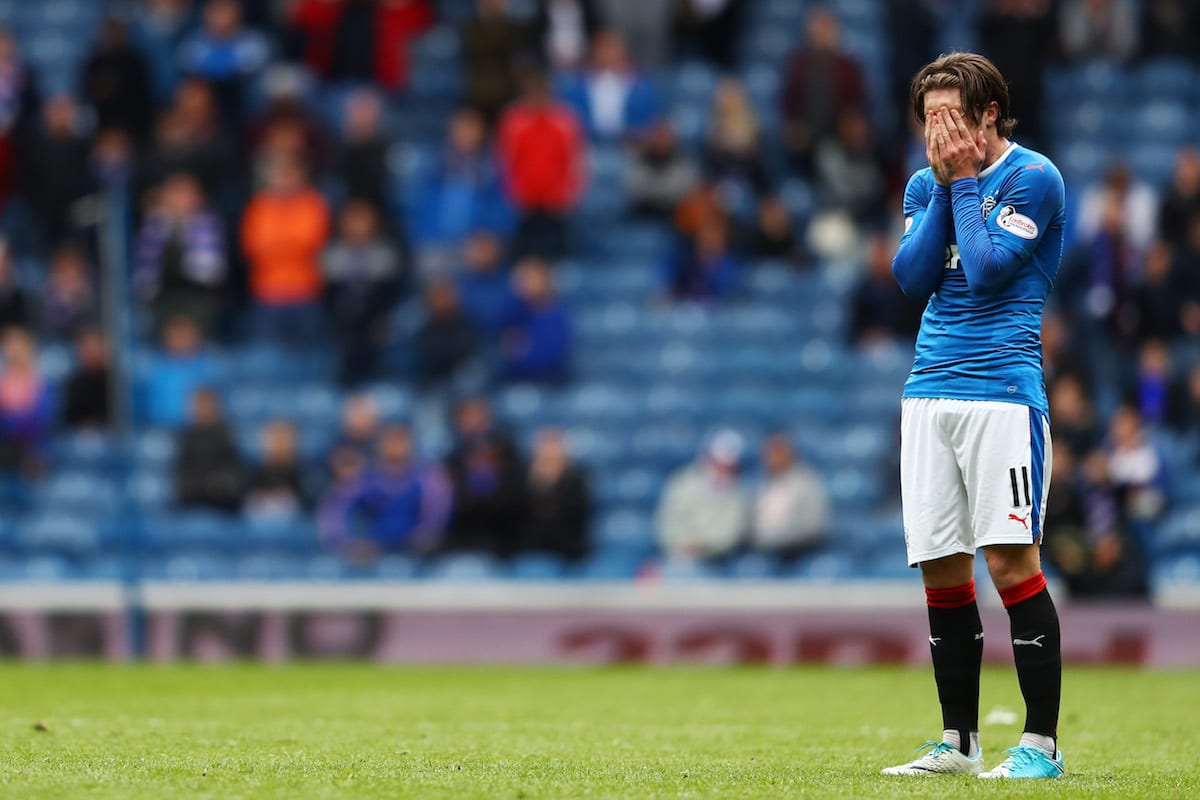 Rangers have that in Lee Wallace and Kenny Miller. Although 37 years old, the former Derby County striker still likes to run the channels, rather than being a penalty box striker.

If you have three players all trying to take up the same areas on the pitch, you become easy to cover and stop.

Although not in the same class as Arsenal transfer target Thomas Lemar and new Manchester City signing, Bernardo Silva, Windass loves that inside role, that’s where he was successful for Accrington Stanley, and coming off the flank, he could do it for Rangers.

In 86 appearances for the English side, he contributed to 36 goals, scoring 23. He will be hoping that Sunday’s return to the scoresheet will be the first of many this term.

“Obviously it is only a friendly so it doesn't mean that much but it's nice to get off the mark,” Windass admitted to RangersTV.

“I don't think I had a point to prove this pre-season. I have no idea how the manager is thinking but I can only keep playing how I have been playing.

“I have scored a few goals in pre-season so hopefully that is enough to get in the team.”

His goal at the weekend came from him getting into the box from the left flank, getting on the end of a pass to provide the finish. Not only will his ability to break into scoring positions aid the attack, he can build a relationship with Wallace on that side to benefit his team.

Playing against Kilmarnock at home last season, there was a window into what they could do together.

Windass gets the ball on the half-way line and instantly he is on the turn and looking forward.

As soon as the 23-year-old is in possession, Wallace reads the situations perfectly and is high up the pitch, waiting for his moment.

With his second touch, Windass has the ball under control and slips Wallace in behind the Killie defence and the former Hearts player is free inside the penalty area and the left-back adds the finish.

He may not have put in the strongest performances when he did make any of his 28 appearances for the Gers, but he did suffer a couple of thigh injuries that stopped him from getting off to a bright start last season.

After starting five games in a row over October and November, he’d miss another four through injury, two more starts followed before another absence.

It wasn’t until the final five games of the campaign before he got another run of consistent game-time.

Rangers are still pushing for the signing of Hearts left winger, Jamie Walker, but the Edinburgh side are holding strong.

According to his boss, Ian Cathro, it has mentally had an impact on his ability to perform.

“Jamie's been under a lot of attention, a lot of speculation all linking him to one particular club,” said Cathro. “We'll support him but everyone has to do the right things and respond properly.”

If Hearts hold out and resist Rangers temptation, it could be a blessing in disguise. Windass is perfect for the role of inside forward coming off the left-flank and it could be the break both he and Rangers need this season.