Maddison has been the standout player, with The Mirror suggesting Liverpool and Tottenham Hotspur are interested in the 21-year-old who has 14 goals and eight assists in the league so far this season.

But, according to the same report, Murphy is also interesting a number of sides, including Leicester City, Bournemouth and Crystal Palace.

Murphy’s twin brother Jacob left Norwich for Newcastle United at the beginning of the 2017/18 season and has gone on to appear sporadically under Rafa Benitez.

Josh is likely to seek a move which ensures more regular playing time than his brother. And the clubs linked give him the ideal platform from which to improve.

Who is Josh Murphy

Born in London, Murphy joined the Canaries’ youth set-up aged 12, along with his twin brother, and both showed enough promise to progress through the ranks and into the first team.

After a short stint on loan at Wigan Athletic during the 2014/15 season, he spent the 2015/16 season with MK Dons and scored seven goals and registered ten assists from 46 appearances in all competitions

Since returning to Norwich he’s become a first-team regular and has made 30 starts and seven sub appearances from a total of 42 Championship games this season.

His performances for the club he joined over ten years ago have stood out this term and it's why he could be moving to the top flight this summer.

Norwich would like Murphy, who has represented England various youth levels, to remain for at least another season, but if the money is right they will part ways with the 23-year-old.

The Murphy twins are similar in more than just looks, with both able to operate in a number of attacking roles.

This versatility is Josh’s first strength, although he would probably prefer cutting in from the left wing onto his stronger right foot. Pace is a key factor in his play and this, combined with dribbling skill and trickery, can see him regularly beat opposition defenders.

He is one of the best players in the league at running with the ball and is eleventh in the Championship when it comes to completed dribbles by wingers.

Murphy also boasts a high pass success rate for a player in such an attacking role, with 81 per cent of his passes finding their target. He also has good numbers for touches in the box, with 162 putting him ninth among his peers in the Championship, and he is sixth for scoring attempts across the campaign with 98.

One strength that can't be measured in numbers is his strong mentality. When his brother departed for Newcastle it would've been easy for Murphy to drift a little, yet he has taken his game to another level in Jacob's absence.

Another telling factor is he is eyeing an England call-up in the future despite suggestions they could be eligible for the Republic of Ireland.

“It’s quiet now around the house. It’s a bit lonely and that, and I think he’s a bit lonely in Newcastle,” Josh revealed to The Pink. “But we text each other every single day as soon as we wake up, and then when we go to sleep and what not.

“So he’s fine. He’s up there doing his thing. I’m here at Norwich doing my thing. And as long as we’re playing well, then it doesn’t really matter.

“And we’re big boys now too. We’re men. So it’s something you’ve got to deal with and although I miss him – and I’m sure he misses me – we just get on with it and as along as we’re playing well, then that’s the main thing.”

Does he have Weaknesses?

The amount of shots he has taken compared to the number of goals scored shows an improvement is needed in the finishing department.

Only one of his 48 shots from outside the area has resulted in a goal, and his total conversion rate is six goals from 98 shots, just six per cent.

And at 5ft 8ins he’s also not the strongest in the air. This doesn’t come into play too often given his role from the wing, but it does mean if he were to operate more regularly as a striker, as he has done at times, he would need balls into feet rather than lofted to him. 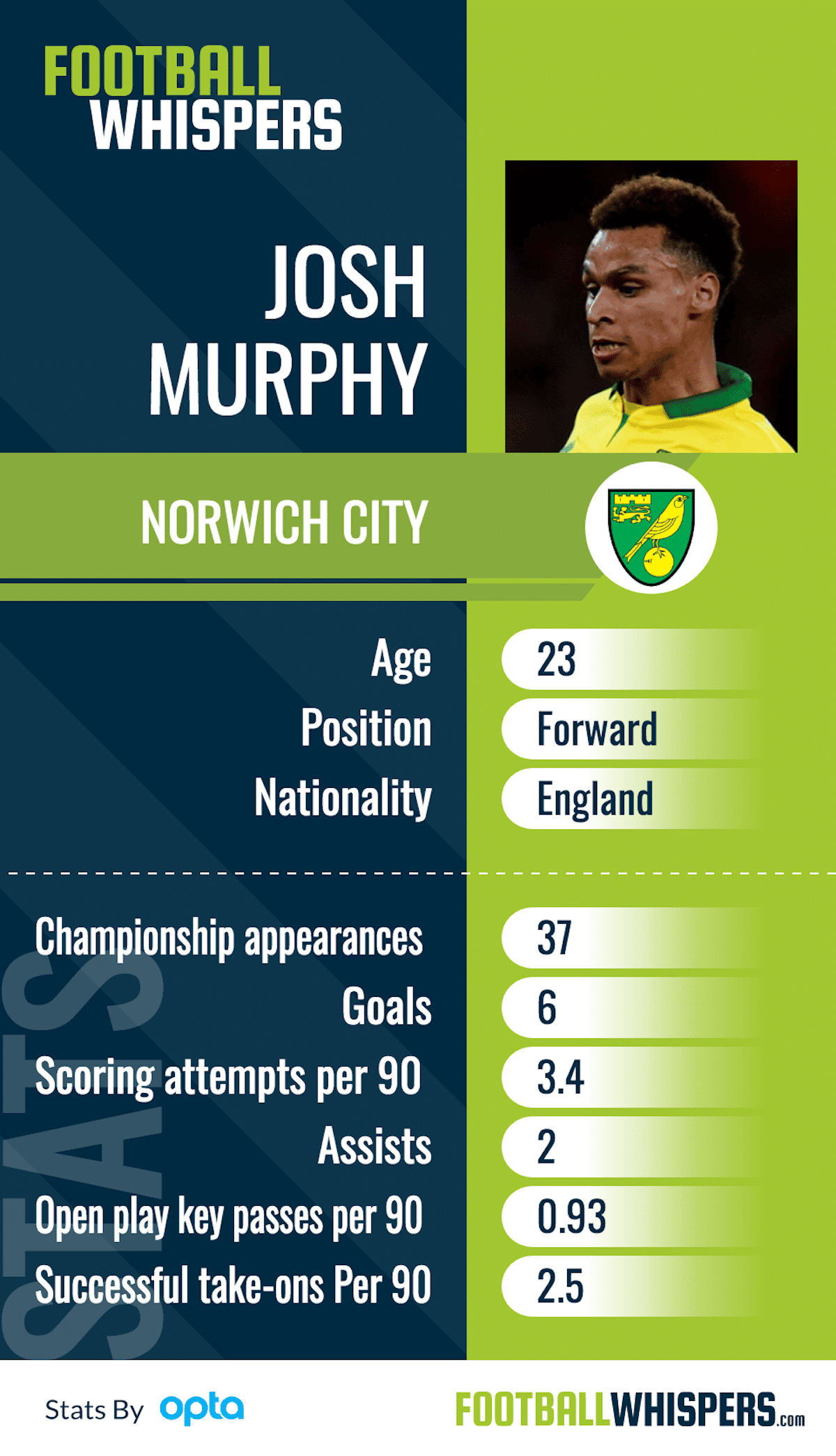 If the Canaries have to sell they will be demanding a big fee in order to strengthen their squad to push for promotion next season.

Jacob left Norwich for Newcastle for a fee of £12million, they could demand a similar figure for Josh, if not more given the volatile transfer market.

The price-tag on Maddison's head is rumoured to be around £30million. If he goes for that price Norwich wouldn't be under pressure to sell Murphy and could ask for at least £20million.

Why he should be signed

Murphy is an exciting prospect who is approaching his best years in terms of development. And at 23 years old he can be an investment for the future and a useful player for the present.

For clubs such as Leicester, Bournemouth and Crystal Palace, he would be worth the gamble. Even if he doesn’t improve beyond his current level these sides could continue to get good service from him or recoup the money they paid.