Jose Mourinho is likely a stern father. The kind who would settle an argument between siblings by sending them both up to bed without dinner. Whether you were falsely accused, framed or really did steal little Tommy’s toy car – papa Jose is not one to brook any nonsense.

Mourinho certainly has mixed relationships with his kids at Manchester United. Henrikh Mkhitaryan and Anthony Martial have been let out of their rooms after protesting their innocence all along, he’s had a happy reunion with Juan Mata, Wayne Rooney is about to go travelling in China and he never did have any love for Memphis Depay.

But there is still one problem child who remains – Luke Shaw. Once earmarked as not only United’s but England’s answer at the left-back position for the next decade at least, he is certainly no prodigal son of Mourinho’s.

Shaw, the world’s most expensive teenager when he arrived at Old Trafford in 2014, has recovered from his leg break nightmare only to stumble into another one. Publically lambasted by Mourinho after the defeat to Watford in September, and criticised for withdrawing from the squad to play Swansea in November, the 21-year-old is not only in the doghouse but the dogbasement.

He has been fully fit since the turn of the year and has not even made the bench in recent weeks – lukewarm soundbites from Mourinho, such as ‘he is working well’, are hardly ringing endorsements.

Does Shaw deserve such brutally tough love? And has such a ploy really worked for Mourinho in the past? 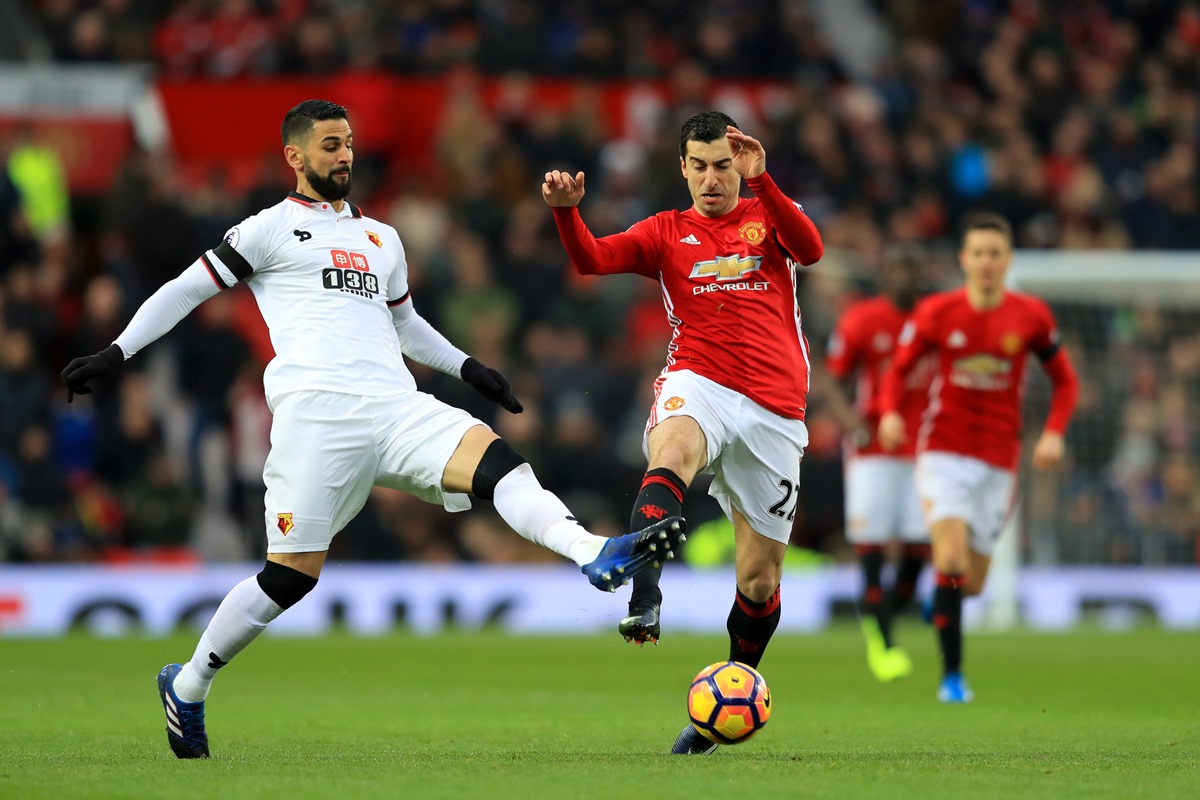 READ MORE: SIX PLAYERS WHO COULD BE ON THEIR WAY OUT OF MANCHESTER UNITED

Mkhitaryan has been held up by some as an example of Mourinho’s man management skills in practice – not afraid to risk alienating a player for the greater good.

After being bought for the relatively modest fee of £26million, what looked a shrewd piece of business was stationed in Old Trafford’s VIP seats until early November.

Why? Having appeared fleetingly in August, the Armenian was hooked at half-time in an admittedly wretched display against Manchester City at Old Trafford.

But Mkhitaryan did not re-emerge until November, earning just his second start in the 4-0 thrashing of Feyenoord in which he proved he was pretty good after all.

That the 27 year old remains one of United’s most potent players heading into the business end of the season could in some part be down to his limited use – but it is doubtful his form is any Mourinho masterstroke.

For example, when United were crying out for inspiration against Burnley, Mkhitaryan was parked in the stands. The 0-0 draw marked their third league game without a goal amid a terrible run in October which remains one of the key reasons why the number six continues to haunt United fans. Oh, and that point is still Burnley’s sole success on their travels in the Premier League. How about that for taking the Mkhi?

Martial is another case in point, a player Mourinho got a bee in his bonnet about for seemingly little reason. The Frenchman has not lit the world on fire this season – that much is true – but he has been a lively option on the left nonetheless. 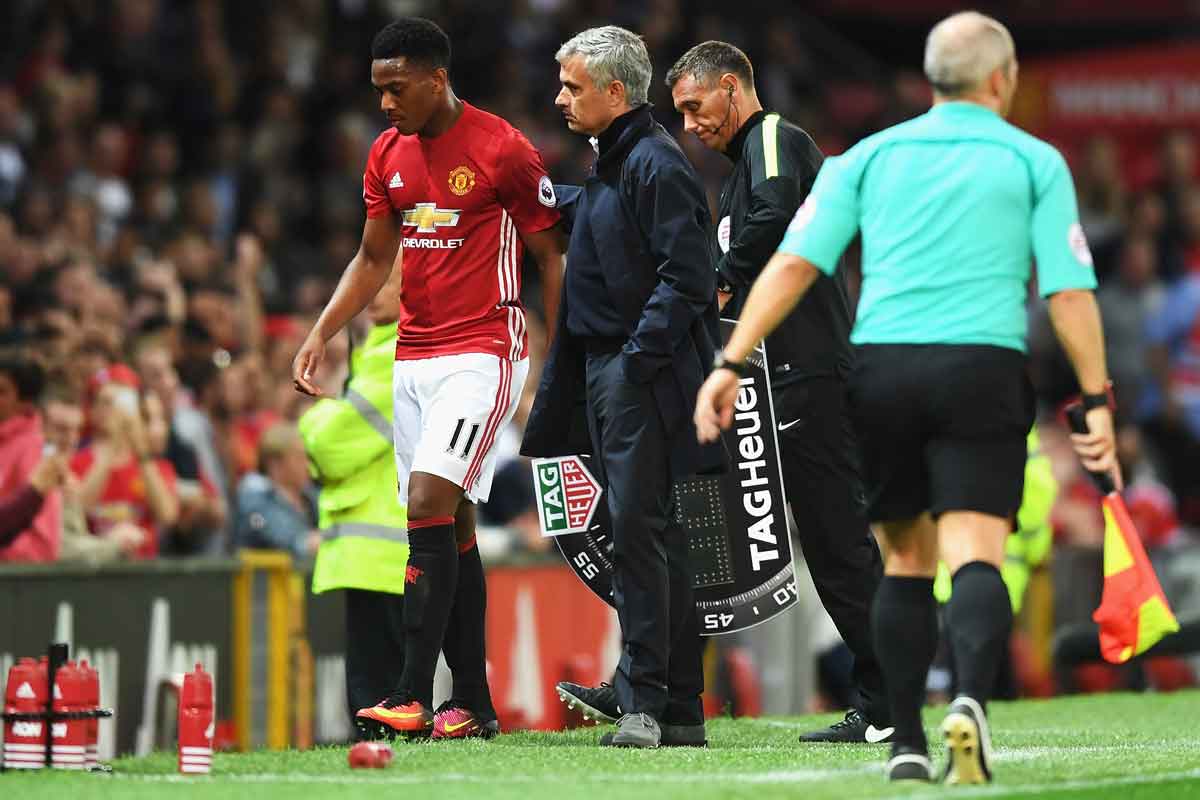 Though Marcus Rashford has been preferred of late, according to whoscored.com Martial has registered more assists (4 to 1), more key passes per game (1 to 0.7) and more dribbles per game (1.4 to 0.9) than his wing rival having played more than four hours less in the Premier League.

That’s not to say Rashford should have been the one thrown under the bus – but it demonstrates that the difference between being in Mourinho’s good books and bad books is not rooted in much logic.

Indeed Mourinho had urged Martial to respond in the FA Cup and though he contributed two assists in the 4-0 victory over Wigan Athletic, did not even make it off the bench in the key Premier League fixture against Hull City a few days later.

The result? Another 0-0, in which Martial’s lightning feet in and around the box would surely have been handy.

Blind love and the case for Shaw

Of course each case should be judged on its merits – just because Mkhitaryan and Martial may have been unfairly treated does not mean Shaw should be hoovering up every minute at left-back.

Nevertheless, there are comparisons to be drawn. Since angering Mourinho in November Shaw has made just three appearances, all in cup competitions, and the bench is seemingly too much to ask for of late.

Mourinho reasoned that Matteo Darmian offered more versatility as a substitute in Saturday’s 2-0 win over Watford – but the man who started at left-back, Daley Blind, is the epitome of flexibility. And with regular left-back Marcos Rojo also out injured, it really was a slap in the face for Shaw.

As dominant as United were against the Hornets, upon review Blind was a defensive liability down the left because he lacks the pace to cope with a speedy winger. 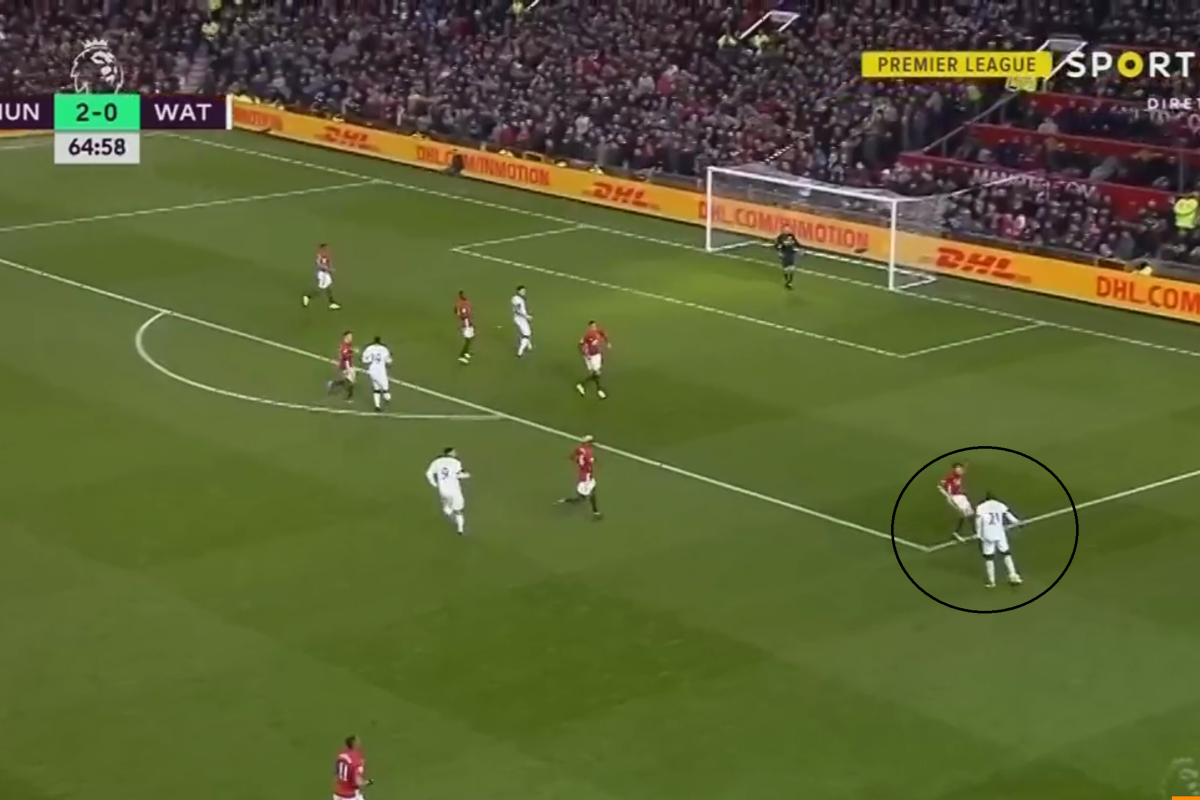 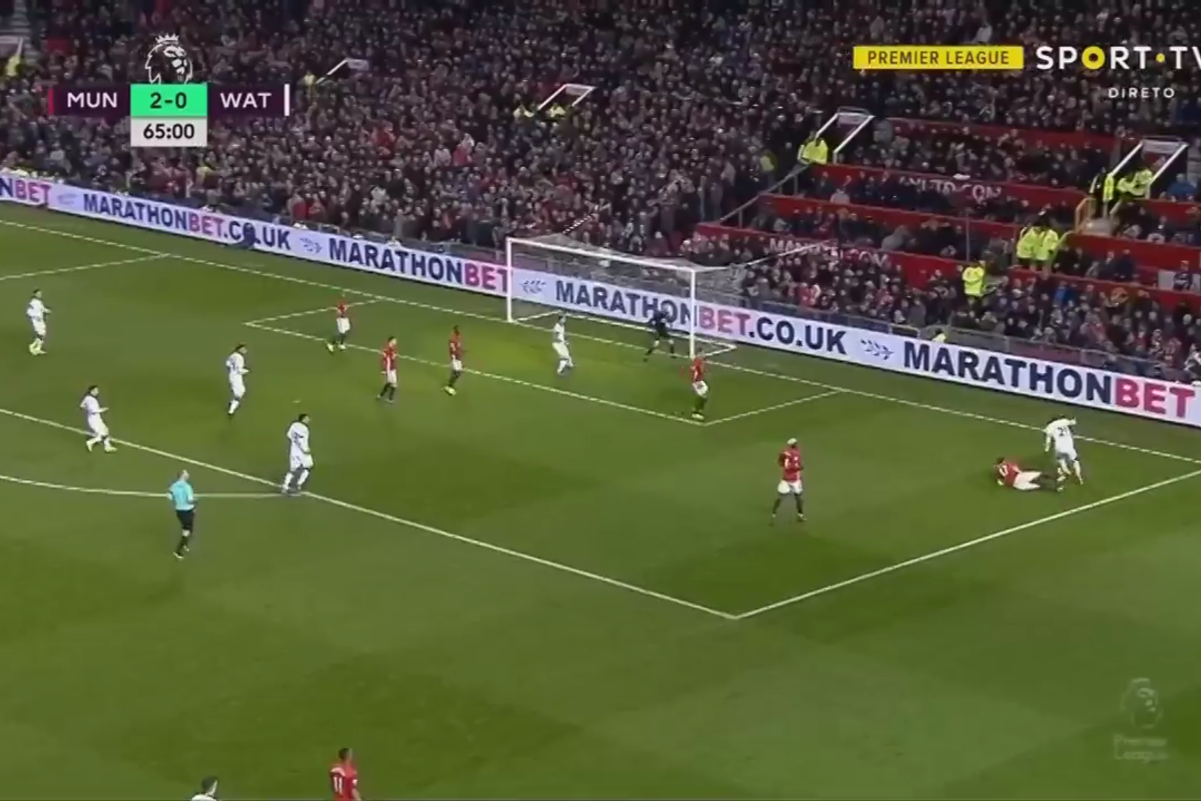 Above, Blind cannot cope with M’Baye Niang’s initial burst of acceleration and lets past a dangerous ball into the box that, thankfully for United, no Watford player gambled on. 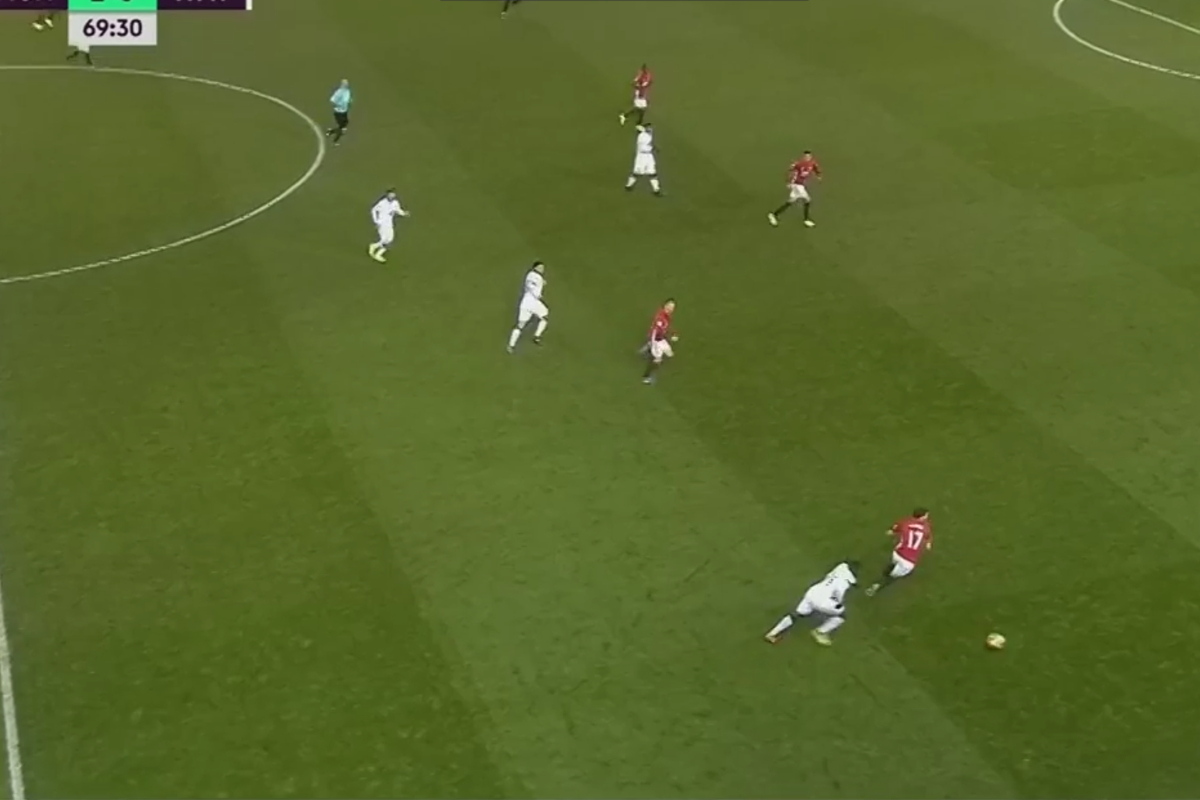 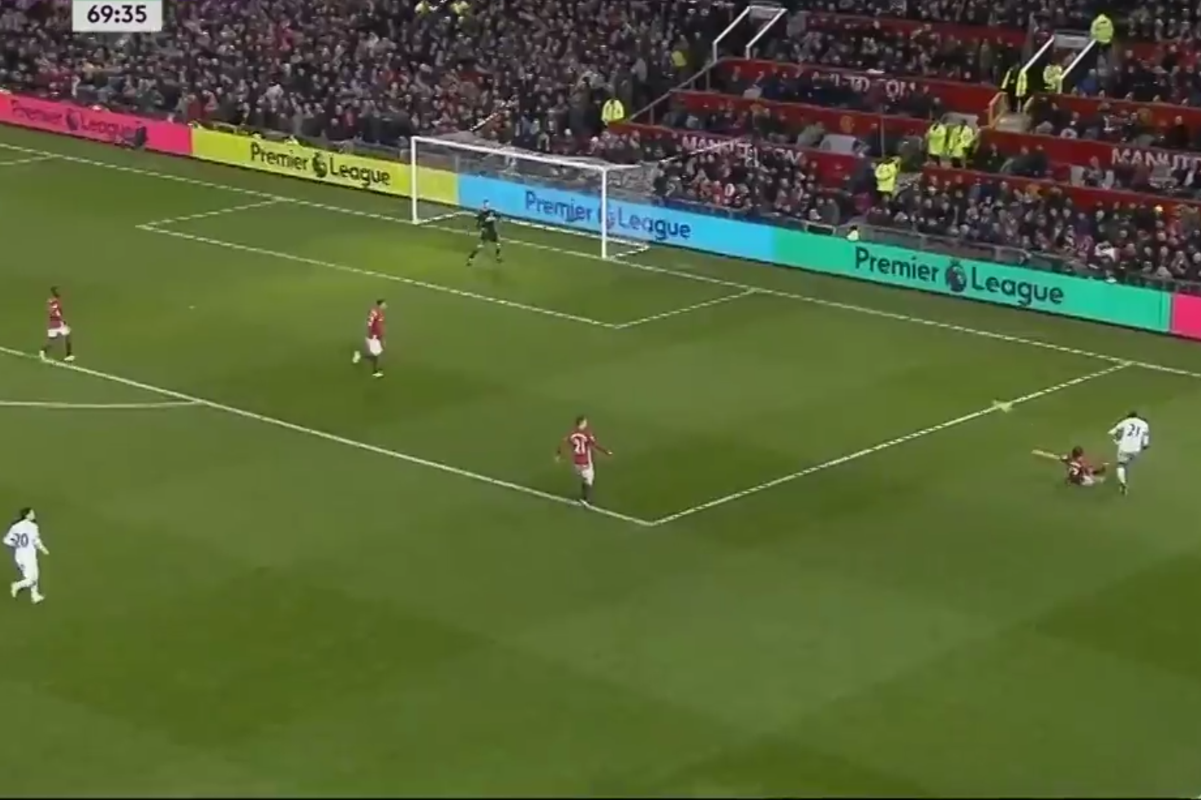 Again, the Dutchman lets Niang streak down the outside and he does not have the powers of recovery to prevent another dangerous ball being delivered. If he does not win the first tackle high up the pitch, then Blind is brutally exposed as a full-back.

This time the cross does reach its intended target but Daryl Janmaat would blast a golden chance wildly over.

Though Shaw suffered a horror injury last season there is little to suggest on the evidence thus far that he last lost much, or if any pace and while he can still be raw around the edges defensively, speed is king.

Blind is a fine crosser of the ball but United lack balance on the counter when compared to the overlaps right-back Antonio Valencia can create down his flank.

United do not play another another league game until March 4 and with Mourinho already grumbling about the a gruelling fixture ahead of the EFL Cup final against Southampton in a fortnight’s time – he must now turn to Shaw.

His ruthless approach with Mkhitaryan and Martial may have worked to varying degrees, but with reason to believe those cases were more by accident than design, alienating Shaw further could well be an accident waiting to happen.

The transfer window has ended but the Football Whispers are only getting started – check out episode 11!