The Guardian put it nicely when they said Darth Vader had entered the Deathstar upon the announcement that Jose Mourinho was the new Manchester United manager.

It may come as a surprise to many but the self proclaimed Special One had humble beginnings much like Anakin Skywalker. He grafted to get where he is today. His playing career didn't amount to much with the highlight being turning out for a second division club in Portugal.  He was brave enough to acknowledge he wasn't going to cut it professionally as a footballer but having been brought up around football he wanted to be involved in it as a career.

He was confident in his coaching ability though. He dropped out of Business School on his first day there to take up Sports Science at a local university. Some may call it foolish, naive almost, but it's a gamble that paid off. Upon receiving his diploma he completed coaching courses in the UK.

For a couple of years he bounced around Portugal doing various jobs; from youth team coach to assistant manager to a scout. His nomadic ways came to an end when he was appointed as a translator to the late Bobby Robson, who at the time was the manager of Portuguese giants Sporting Lisbon. It was this move that helped form the Mourinho many are so accustomed to seeing.

He was very much an assistant manager to Bobby Robson. There was trust between the two and a bond which saw Mourinho follow Robson to Portuguese rivals Porto and then finally FC Barcelona.

Yet despite his various other roles at the club the fans of Barcelona seemed to just know his as ‘the translator'. It's disrespectful to a man who had worked so hard to get where he was to be labelled as nothing more than a translator.

It was this jibe that seemed to be the instigator for Mourinho to transition into the character fans all around the world see on a daily basis. He's on a quest to prove to the doubters that he's much more than a translator. He seems to overcompensate. Having to prove this point to not only himself but to the world seemed to send him down a destructive path. It was the beginning of the end for Anakin and the awakening of Darth Vader.

It's even more puzzling when you consider the fact Andre Villas-Boas, a man who like Mourinho was picked up by Bobby Robson and did the leg work before becoming a manager, is lauded for the way he got to the top. Does the media play a part in this because AVB plays the attacking football they like to see whereas Mourinho doesn't?

At all three clubs Mourinho  called home with Robson he acted as a coach, a translator and a confidant to Robson. His earned the respect of the players and staff at all three clubs through hard work. Barcelona legend Xavi commented on Mourinho's time at Barcelona to ESPN –

“He was excellent in his three years at Barcelona. He was the assistant coach, someone who understood the philiopsy of Barca and who shared many characteristic with Van Gaal. He was very respected by players. He sometimes trained us alone at Barca B and he was excellent. I'm surprised that he became known for another type of football, more defensive, because he wasn't like that with us.” 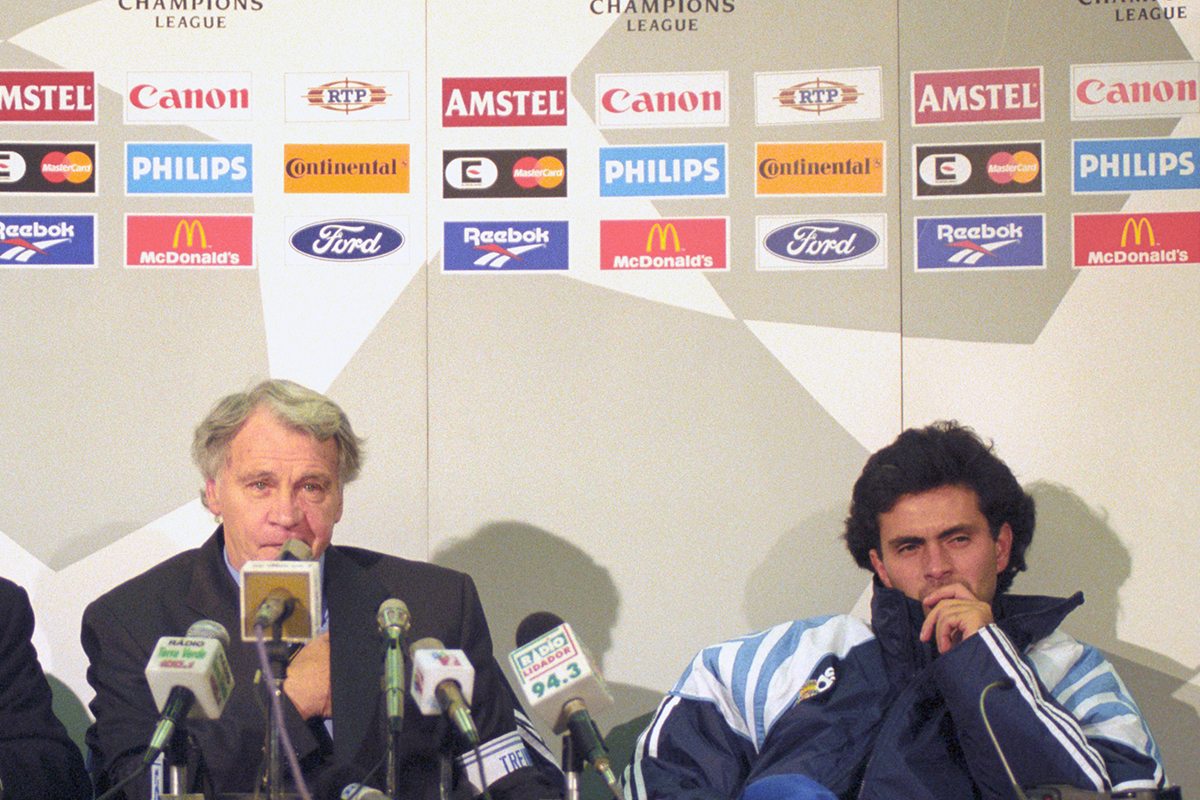 It's interesting to hear Xavi mention his style of play. Quite simply he's adapted it to win. Some managers die on their own sword by continuing to play an attractive style of play that doesn't yield results. Mourinho sacrifices an aesthetically pleasing style of play for results, and football is very much a results driven game.

Mourinho knew to compensate for winning with a certain style he had to make up for it in other ways. He had to be heard. Be Different.

“He was not submissive – he used to contradict me when I was in the wrong. Finally I wanted to hear what he had to say and ended up listening to him more than the rest of my assistants.”

When you think of Mourinho your first thoughts tend to be about the person instead of a certain style of play. That's the way he wants it. That's his design.

After leaving Barcelona in 2000 Mourinho decided to flex his muscles as a manager. Portuguese giants Benfica made their move. Mourinho's stubbornness was evident from the start. Despite the club having an assistant lined up for him already he appointed someone else.  Eager to learn he appoints assistants who have knowledge of the club. Trusty lieutenants. His time at the club was turbulent, his authority was often called into question by the president and he resigned after 9 games when the new president refused to give him a new deal.

Not many would try such a stunt. His first big job as a manager, at one of Portugal's biggest clubs, and he resigns after 9 games despite such a good start.

The following summer saw Mourinho take his ego to Uniao de Leiria and against all odds he had them in third place by the turn of the year. Porto made their move and in January 2002 he was appointed as their new manager. He took over when the club were in 5th place but after only two defeats in 15 the club finished in 3rd place.

His first full season there saw his side only lose twice in the entire season, win the league by 11 points and win the UEFA Cup. He followed that up in the following season by winning the league and the Champions League, defeating future employers Manchester United along the way.

England beckoned with both Liverpool and Chelsea rumoured to be interested in bringing the charismatic manager to the Premier League.

Chelsea Chairman Roman Abramovich made him an offer he couldn't refuse and he was now a big fish swimming with sharks. He had to commit to a role and stick with it. He did just that.

An avid believer that psychology plays a part in Football, Mourinho went down the path that had served Sir Alex Ferguson well for so many years; mind games. He knows defeating your opponent mentally is easier than doing so physically. He also identifies the fact if you alleviate the stresses from your own players it makes it easier for them. He shoulders the burden instead of his players.

He manipulates the talking points from the game to suit his agenda.

He plays the part of the villain? Why? Because it's who the public need him to be. Knee slide at Old Trafford when his Porto side defeated the English Champions en route to being named Champions League winners. Shushing the Liverpool fans in the Carling Cup final a mere few months after claiming he wanted to manage the club. Poking Tito Villanova's eye in the Spanish Super Cup final. Controversy follows the man because he allows it to.

Jorge Mendes is the Darth Sidious in all of this. Not that he needed a lot of coaxing to join the dark side but the pair together ensured that there was a Mourinho shaped shadow cast over Old Trafford for Louis Van Gaal's final 5 months as United boss.

There have been Star Wars references throughout this piece but there is also another film, and more specifically a character than Mourinho could be compared to. Batman, in The Dark Knight, when he takes the blame and becomes the villain because Gotham wasn't ready to hear that Harvey Dent *spoilers* had turned into two-face. Did Mourinho give the world this villainous character because they weren't ready for the alternative just yet? A meticulous man with great tactical nous, an innovator and a flair for attacking football? The Guardiola era was 8 years away.