With Zlatan Ibrahimovic suspended and Juan Mata becoming the latest addition to a growing injury list, Mourinho lined up with Jesse Lingard, Marcus Rashford, Anthony Martial and Henrikh Mkhitaryan as his attacking quartet.

Like in their equally frustrating endeavours against Hull City and Burnley, United were shut out in front of their own fans. With the Baggies predictably setting up to sit back and absorb pressure, United failed to capitalise on a lion’s share of possession as their hopes of a top-four finish suffered another crushing blow.

If Manchester City beat Arsenal on Sunday, United will find themselves seven points off the Champions League places, thus increasing the pressure on winning the Europa League as a means to securing a place in UEFA’s premier club competition next season.

Here's what Jose Mourinho had to say in his post-match interview with #MUTV… pic.twitter.com/LglZWZPCNw

READ MORE: WHY EVERY TEAM NEEDS A JESSE LINGARD

And Mourinho was far from happy.

“In football, especially in teams that want to win things you need consistency in the individuals,” he said.

“We miss easy chances, we miss moments to push really but then a couple of players disappear and there are 10 minutes when you don't see them and you see always the same people, always the same guys in front of the train, pulling the train.”

It was a damning, withering assessment of his attacking players, sending them a clear message: inconsistency will cost you your place at this club.

More than anything, United’s latest bungled attempt at gaining ground on those above them further highlighted the inadequacies in the squad and the pressing need for improvement.

Now, at this critical juncture, there is nowhere to hide for the misfiring attackers whose tendency to vanish won’t immunise them from Mourinho’s ruthless streak when clearing out the deadwood in the summer.

Mourinho’s vexation, understandably, stems from the fact that United are actually playing attractive football while lacking the cutting edge that defined the Fergie era and made Old Trafford that most intimidating fortress in English football.

Beating the teams ‘they were supposed to beat’ was precisely how United won league titles through the 90s and up until Ferguson’s retirement in 2013. In contrast, this United are clearly fazed by the weight of expectation, hampering their ability to win games they should be successfully negotiating with the quality they possess.

Quite simply, United have been exceptionally wasteful this season and that’s something Mourinho won’t tolerate. They are third in both chances created this season and shots on target, but a pathetic conversion rate of 12.3% has stymied their attempts to make an impression at the top of the table.

This was exemplified when Mkhitaryan spurned a one-on-one with Ben Foster on Saturday. After the former United goalkeeper turned the ball away for a corner, the Armenian cried in anguish towards the skies. His manager was unimpressed, too, chucking his pen to the ground in disgust on the touchline. This is exactly what Mourinho was referring to when he spoke about ‘easy chances.’

Of course, the depth of United’s problems extend far beyond their fleet-footed Armenian. West Brom represented another opportunity for Martial, Lingard and Rashford to convince their manager of their worth.

All three players have endured indifferent campaigns this season, sometimes broken up with an eye-catching moment which illustrates their natural talent. Rashford stung Foster’s palms with a couple of long-ranged efforts on Saturday, but the precocious England striker hasn’t scored a league goal since September, which simply doesn’t meet Mourinho’s requirements.

However, consistency will always trump that in Mourinho’s books, and there’s certainly enough to suggest his patience is wearing thin with the aforementioned trio. 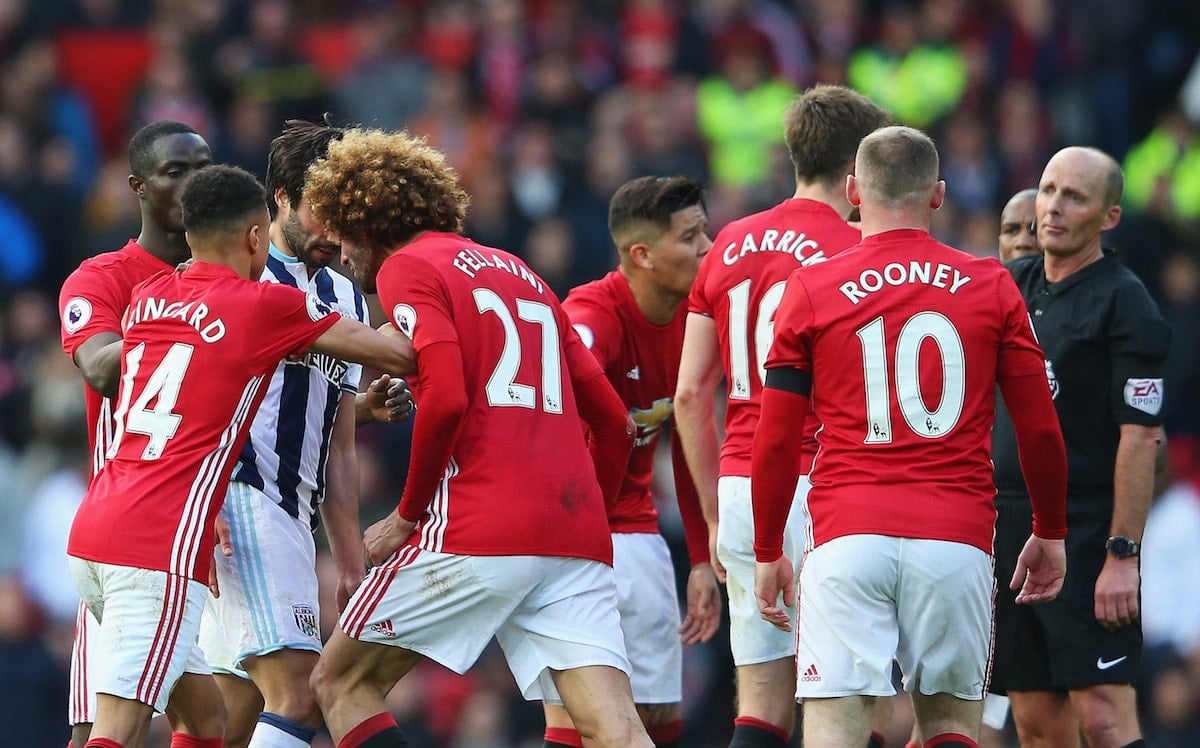 After singling Ashley Young, Marouane Fellaini, Michael Carrick, Antonio Valencia, Eric Bailly and Marcos Rojo for praise against the Baggies, Mourinho said: “The other ones were a flash of talent, a glimpse of talent, almost goal and we need to keep opponents and this is deja vu all season.”

Such words adequately portray Mourinho’s feelings: he knows this sub-par performance has been all too regular this season, and when he evaluates his squad in the summer, he will look to these uninspiring home draws as justification for making ruthless decisions.

But while it’s easy to paint Mourinho as a joyless grouch, it’s difficult to argue against him criticising players who are consistently under-performing, especially when he knows what they’re capable of. Martial and Rashford both enjoyed exhilarating sequences of form under Louis van Gaal in which they became United’s shining beacon in attack, while Lingard has often reminded detractors what a devastating player he can be, most recently against Middlesbrough.

Plenty has been said of Ibrahimovic’s wastefulness this season. The Swede has attempted 109 shots in the league this season, scoring 15. While that’s not the most flattering reflection of the striker’s powers, he has still scored nine more league goals than anyone else and almost double the entire tally of Wayne Rooney, Martial and Lingard.

In a perverted sense, Ibrahimovic has almost earned the right to be wasteful because, at the same time, he’s deadly and effective. Without Ibrahimovic leading the line, United possess the same attacking appetite without that final bite and that’s a harsh yet undeniable estimation of how Martial, Rashford and co have failed to build on their initial promise.

Tuesday night brings with it another home match, this time against Everton. While the Toffees, who possess the league’s deadliest marksman in Romelu Lukaku, will be keen to bounce back following their defeat to Liverpool, Mourinho will still expect an assertive response from his own players to his call for consistency.

The Portuguese coach is set to welcome back Ibrahimovic from suspension, meaning Rashford, Martial or Lingard could drop to the bench. Unfortunately, they haven’t done enough in their illustrious teammate’s absence to nail down their starting place.