A number of big names have been linked with the Celtic manager’s job in recent months, including Belgium boss Roberto Martinez, Newcastle United hero Rafael Benitez, and Andre Villas-Boas. Still, none of the three even come close to the latest rumoured target in terms of reputation.

Italian journalist Gianluca Di Marzio has reported José Mourinho had been offered the chance to manage the Scottish champions, who sealed an eighth straight league title with victory over Aberdeen last weekend.

Mourinho would unquestionably be the most exciting managerial hire ever made by a Scottish Premiership club. And, while finances may be an issue, it is considered somewhat feasible given the man himself has spoken of his willingness to work at a slightly lower level since departing from Manchester United.

His appointment would be huge news for Celtic, and it would also energise the game in Scotland as a whole. When Steven Gerrard took charge at Rangers last season it seemed as if the scale of outside attention ramped up; if ‘The Special One’ arrived that same effect would be felt and then some.

So, what if the unthinkable actually happened? If Mourinho took over, how would Celtic play? Here, we at Football Whispers analyse this extraordinary possibility.

It isn’t that long since Celtic experienced serious tactical change thanks to the work of a big-name former Premier League manager. When Brendan Rodgers arrived in 2016, he brought with him a positional game that led the side to dominate the ball more than before.

Offensively, Rodgers focused a lot on creating overloads in central areas, isolating his best dribblers out wide, and getting players between the lines and in the channels. This allowed Celtic to play through their opposition frequently, building out from the back and through the thirds primarily via short passes.

The attacking shape was fluid and could change mid-game – a 4-2-3-1 could become a 3-4-2-1 with a box in midfield of two central midfielders and two attacking midfielders that drew the opponent inside and created space outside for James Forrest and Kieran Tierney to get 1v1, beat their man and attack inwards. 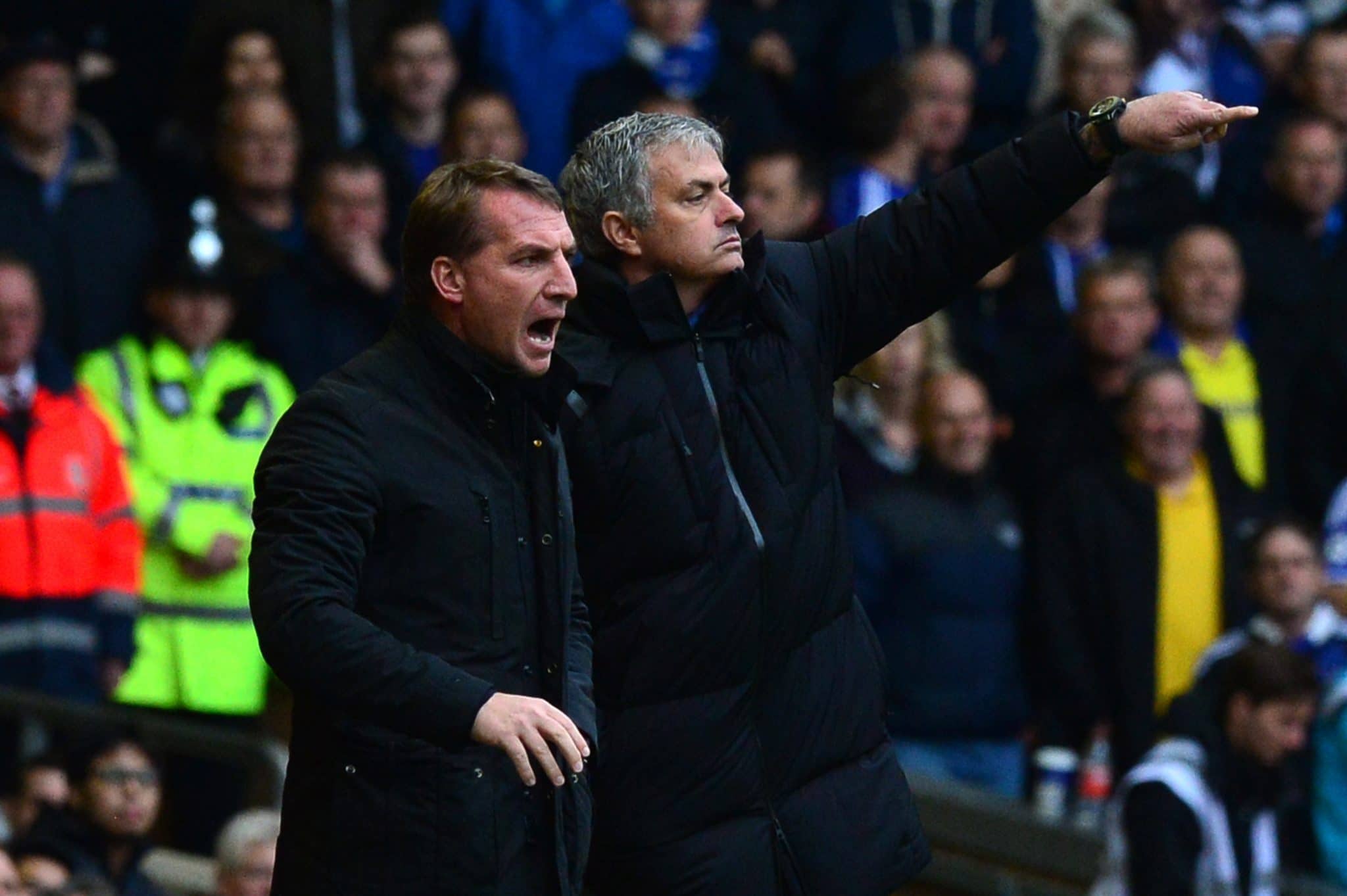 Mourinho would want his side to control possession, though there would be far less emphasis on dominating the ball and more emphasis on stability. He’d allow for some rotations and interchanges, particularly in the wide and inside channels, though he would also institute a more mixed offensive game that combined short and long passes.

Defensively, Celtic under Rodgers were highly man-oriented in their pressing strategy. Most commonly their shape would become a 4-1-4-1, with a central midfielder moving up to support the lone striker in pressing opposition centre-backs.

Both central midfielders could leave their zone to press and exert extreme pressure around the ball, while the wingers would close down opposition full-backs and the back four sat just beneath halfway to support the press.

This level of aggression and man-orientation would not be continued by Mourinho, who has generally favoured a more zonal defensive approach. Were he to manage Celtic, they would most likely apply less intense pressure and prioritise more their organisation and compactness within the defensive shape.

One of the common themes throughout Mourinho’s managerial career is that his teams have been patient without the ball, waiting for their opponent to make mistakes before counter-attacking quickly. As such, particularly for tricky away games, Old Firm derbies or big European matches, he would probably have Celtic defend a little deeper and less aggressively.

The cautious 6-3-1 shape, with wingers as auxiliary wing-backs, deployed by the Portuguese at Manchester United for clashes with the likes of Liverpool, was a unique response to the low-quality centre-backs at his disposal and far from the traditional ‘Mourinho way’. But it gave an example of how far he is willing to go in order to disarm the opposition’s strengths and hide his own team’s weaknesses.

In short, were he to take over at Celtic, those aforementioned possession numbers could be expected to revert back to something like pre-Rodgers levels (between 60 and 65 per cent).

The transition phases are where fewer changes could be seen. While at Porto, Mourinho had his side pressure the ball instantly after losing it; indeed, they were ‘counter-pressing’ long before the term came to be widely known thanks to Jurgen Klopp.

And, in the transition from defence to attack, Mourinho has always coached his teams to counter-attack quickly.

While Rodgers was not overly fussed about this and was happy to see his side re-establish controlled possession, the instant counter has been utilised increasingly since Neil Lennon returned to Celtic on an interim basis.

To summarise, Mourinho would make tactical changes at Celtic. The intense man-oriented pressing seen under Rodgers would be swapped for a more zonal approach, there would be more fast counter-attacks than before, and possession dominance within a positional attacking game would be ditched for a slightly more direct style.

With all of the above in mind, who would be the key players?

Some may laugh at the suggestion, but Scott Brown would probably become even more influential than he already is. While there have been criticisms regarding his supposed waning importance this term, Celtic’s captain remains a vital presence at the base of midfield.

The 33-year-old is averaging 2.1 successful defensive duels, 11.2 recoveries and 5.3 interceptions per 90 minutes – in all three categories he’s up there with the best defensive midfielders in the Scottish Premiership, despite playing for a team that averages over 70 per cent of possession.

Brown’s numbers reflect his key role in stopping opposition counters and breaking up attacks. This, alongside his cult hero status with the support and on-pitch leadership, would make him invaluable to Mourinho.

Behind him, Kristoffer Ajer is gradually maturing into the type of centre-back the Portuguese coach loves. He’s both refined in possession and solid defensively – one minute he could be winning an aerial battle, the next he could be driving through the centre of the pitch with the ball at feet.

Mourinho has often utilised at least one central defender that can ‘do both’ – think Ricardo Carvalho at Porto and Chelsea, or Sergio Ramos at Real Madrid. Ajer could fill this particular role in his Celtic team.

Further forward, Ryan Christie is exactly what the former Manchester United boss would want in an attacking midfielder. The 24-year-old possesses a fine touch, dribbling skill and penetrative passing, but he’s also quick to pressure the ball and reacts immediately to his team losing possession. That focus and aggression would be welcomed.

Ajer, Brown and Christie would potentially form the spine of the team within a 4-2-3-1 shape not dissimilar to that used by Mourinho at Real Madrid and Chelsea the second time around. 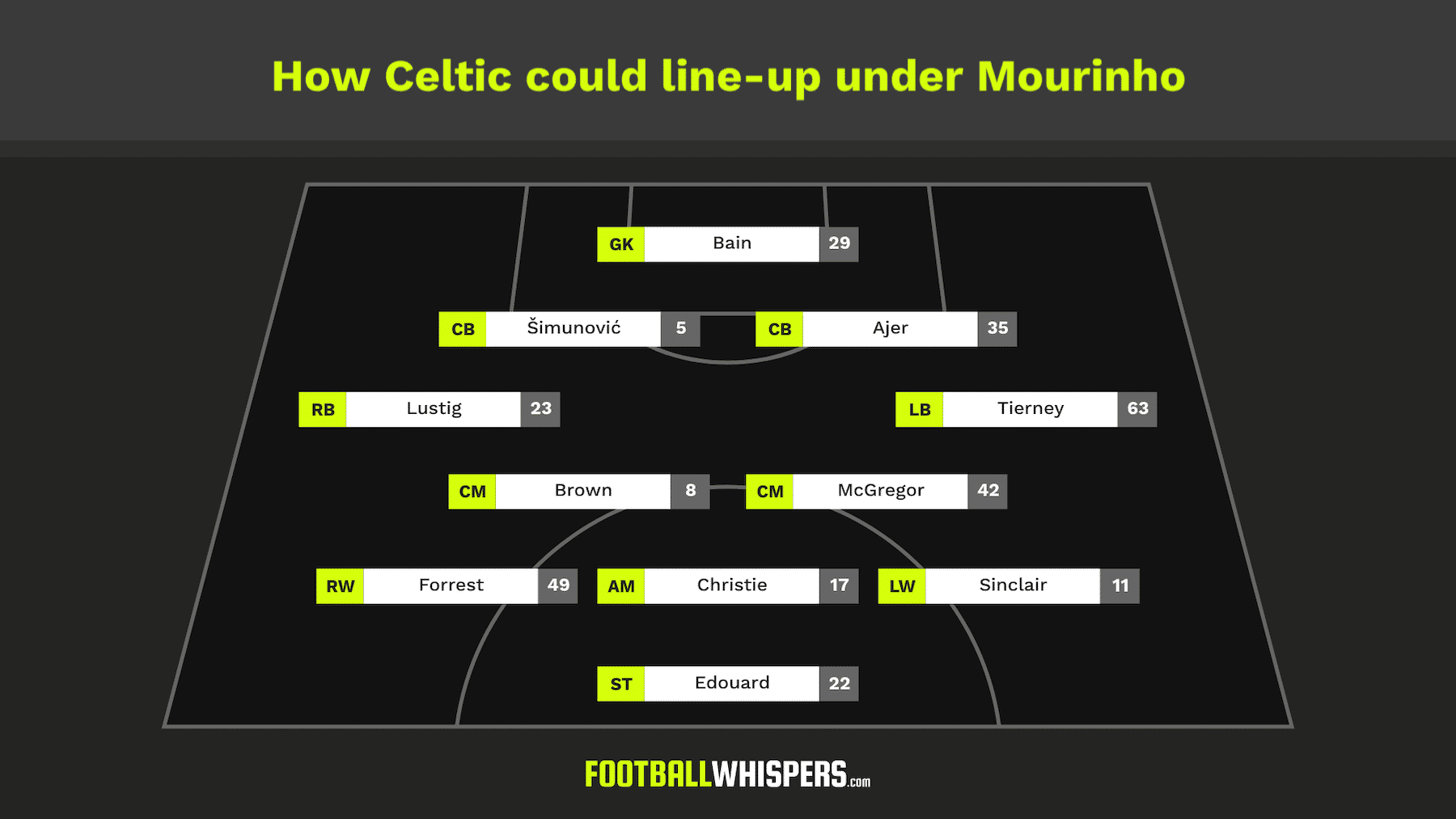 Celtic are in the hunt for 10-in-a-row, but they also want to compete more in Europe. Having failed to get beyond the Champions League group stages since 2013 who better to bring in than the man that won the competition with Porto in 2004?

Since that victory, no team outside of the big four leagues – England, Spain, Italy, Germany – has won the tournament. Indeed, in the 15 years since, only four ‘non-elite’ teams have even made the final four: PSV Eindhoven in 2005, Lyon in 2010, Monaco in 2017, and this season’s Ajax.

Mourinho may not offer football of the same aesthetic appeal as Rodgers but he knows how to get the best out of attacking teams. That, along with his success in Europe, suggests he would take Celtic onto another level.