There is a certain protocol to be observed when it comes to unveiling new signings. Any combination of a photo, video or GIF – the more contrived the better – complete with an inane hashtag, an in-house interview in which the signing confirms they are, indeed, ‘buzzing' to join their new team, all rounded off with a grammatically troubling tweet expressing a similar sentiment.

It's a well-rehearsed formula but not one José Holebas followed when he joined Watford from Roma in the summer of 2015. But then the Greek full-back has never been one to follow convention – just see the tattoos which adorn his knuckles or read his views on Brexit: “I don’t get the point of what you are doing. You should stay in Europe and that’s it”.

Instead, he spent his first few days after transferring to the Hertfordshire side denying he'd even signed for the Hornets.

“They arranged my transfer without asking me,” he said at the time. “I haven’t signed anything yet, I have to see the contract first. I don’t know why this has happened, I know that both Roma and Watford announced my transfer, but they’d have to talk to my representatives first.”

Eventually, he relented. But there was no smiling photo, no interview and no tweet to underline his delight at joining the Premier League new boys.

Make no mistake, Holebas was not thrilled to be a Watford player and as far as charm offensives go, refusing to sign a flag for supporters who'd followed their team to Germany in pre-season was not a good look.

Yet despite what can generously be described as a ‘rocky' start to life at Watford, Holebas has overcome his many detractors. And how.

In Europe's top five leagues (the Premier League, La Liga, Bundesliga, Serie A and Ligue 1), the only defenders to have recorded more assists than Holebas this season are Bayern Munich utility man Joshua Kimmich (10), Barcelona flyer Jordi Alba (7) and Kenny Lala (8) of Strasbourg. 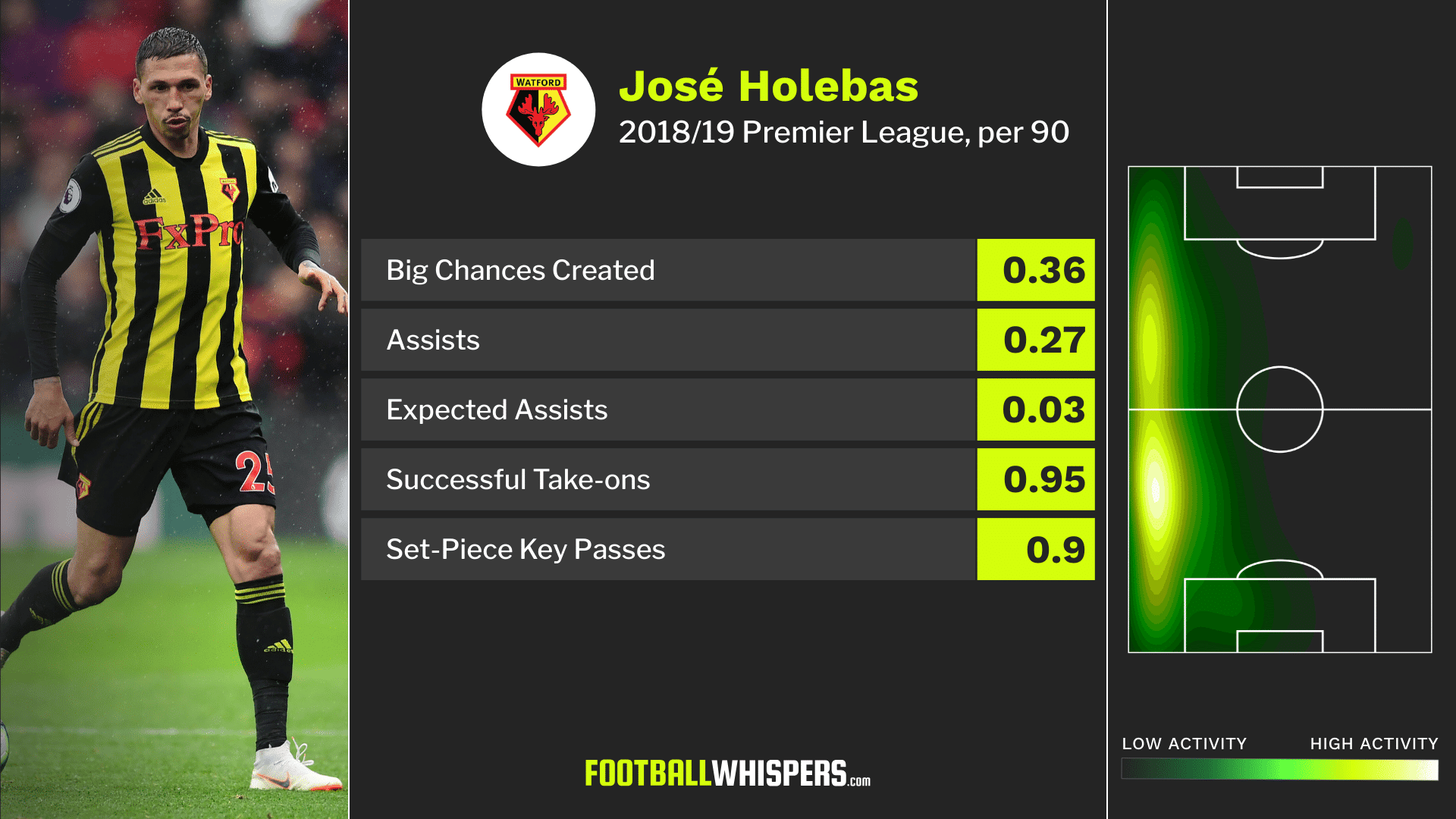 And yet it could all have been so different. After the confusion surrounding his arrival at Vicarage Road, Holebas started three of Watford's first four in the Premier League. Yet after featuring in the 2-0 defeat at Manchester City – a game after which he gave his version of events regarding his summer switch for the first time – he did not make another appearance until the 2-2 draw with Chelsea on Boxing Day.

Watford head coach Quique Sánchez Flores evidently did not fancy the Greek international and, speaking in October of that season, said: “Holebas needs to improve.

“I chose him in the first match because he was the left-back but his performances have not been enough to keep him in the first XI, so it's very easy for me. It's not enough. He needs to train more and train better and have a better understanding of everything.”

Holebas, it seems, didn't fancy Sánchez Flores either. “In the first year I didn’t know what the hell was going on, I was sitting more in my house than in a game,” he told The Times earlier this season.”That manager [Sánchez Flores] did not like personality and characters. He wanted robots who say ‘yes’ and that’s it. You couldn’t say your opinion.”

With Chelsea loanee Nathan Aké impressing in his place, it seemed a foregone conclusion the defender would depart in the January transfer window.

After failing to secure a move away in January 2016, Holebas made nine further appearances before the season was out. He still outlasted Sánchez Flores, though, the Spaniard given a rousing send-off after securing a 13th-place finish and reaching an FA Cup semi-final in his only season in charge of Watford.

With the Spaniard gone, replaced by Walter Mazzarri, Holebas made the left-back spot his own, appearing in all but five games before the Italian was removed after a single season. He was not without his faults, though, finishing the season with an incredible 14 bookings – one short of the all-time Premier League record.

It was a similar story under Marco Silva and, latterly, Javi Gracia last term; Holebas rising to see off the brief threat of Dutch international Marvin Zeegelaar, ending the season with a somewhat surprising 12-month extension to his contract.

There will still too many flashpoints for most supporters' liking, though. Not least in the 4-1 defeat to newly promoted Huddersfield Town during he gave up chasing Rajiv van la Parra, allowing Laurent Depoitre to lash home the visitors’ third as he lay prone, appealing for treatment.

Earlier in the season he had been needlessly sent off in the Carabao Cup defeat to second-tier Bristol City. The cautions tally, though, stood at just eight. 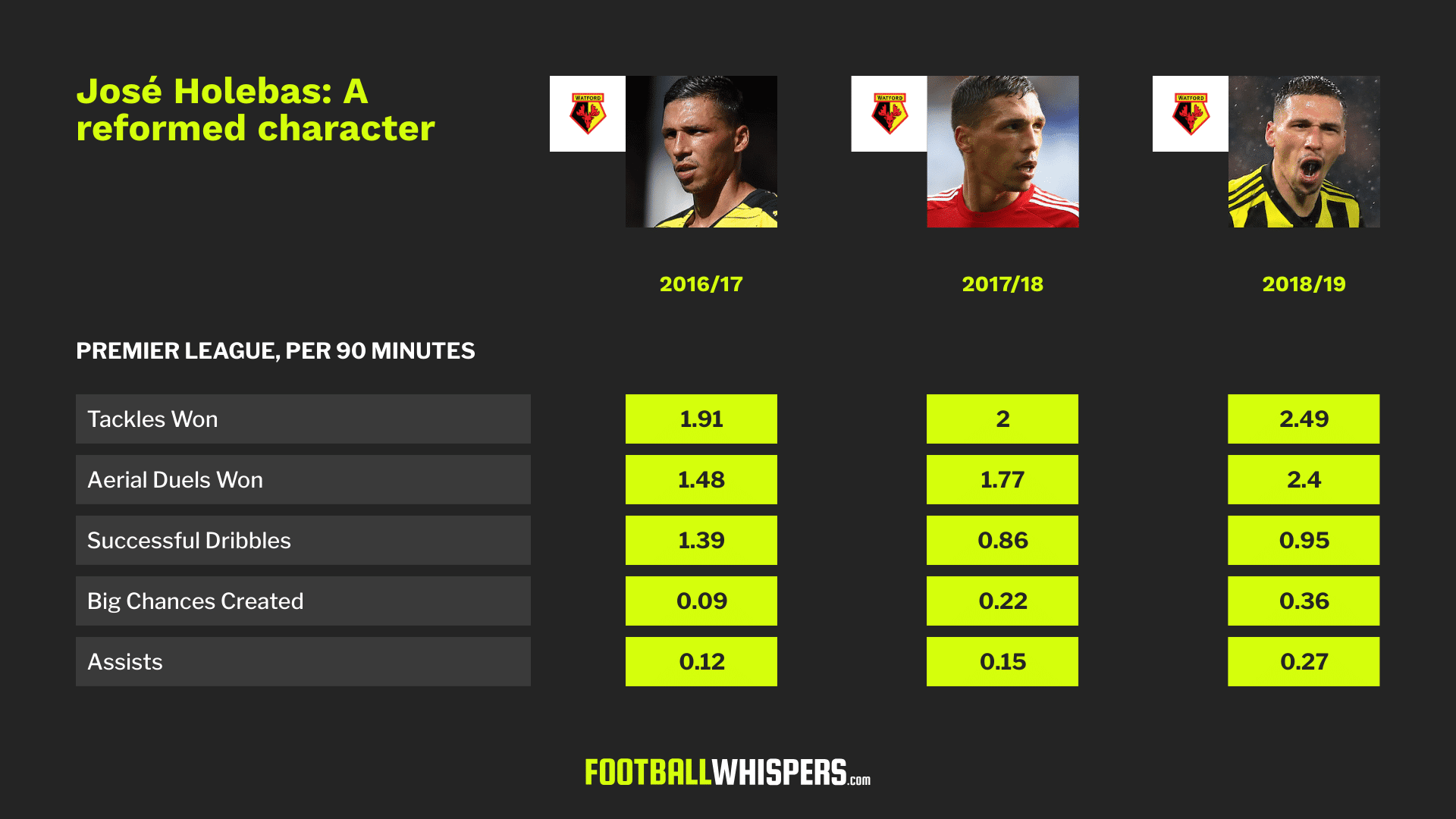 Despite his advancing years, Holebas appeared to lack maturity and his time as a regular starter finally looked to be up when Watford signed Bologna left-back Adam Masina last summer. The Moroccan threatened to be everything the veteran Holebas was not: young, dynamic and reliable.

Whether Holebas felt threatened by the 24-year-old's arrival or is simply benefitting from the leadership of Gracia is unclear. What is certain is he has taken his performances to a level few, if any, could have predicted. All of which means new-boy Masina has been restricted to just four Premier League starts – the last of which came on December 29.

At 34 the great shame of this renaissance is Holebas is in his twilight years. However, he is a player who is rarely injured. For as long as he continues to hit these heights it is near impossible for Gracia to drop him as he closes in his 100th Premier League start for the Hornets – a figure it was impossible to imagine him reaching four years ago.