Were it not for a late change of heart, life in the Premier League could've been very different for Jorginho.

Having starred for Napoli in Serie A last term, the midfielder was very much in demand. Several clubs were interested in signing him in the summer but it was Manchester City who appeared to have won the race.

But then Chelsea appointed Maurizio Sarri, the man who had built his Napoli side around Jorginho. And the Blues jumped to the front of the queue.

“We were close but in the end Jorginho decided to stay with Sarri,” Pep Guardiola said earlier in the season.

“We tried, we believed it was done but at the last turn he decided on Chelsea. Maybe it was a bit late to announce that but if you decide you don't come, then don't come.

“The blow would be to come here when he prefers Chelsea. Nobody put a gun to his head and said, ‘You have to.'”

Had Jorginho moved to the Etihad, he would have likely shared his role as midfield orchestrator with Fernandinho. The Brazilian is one of Guardiola's most trusted players and the Catalan has called him a “gift” and a “joy” this season.

Fernandinho's role in the City side is, primarily, two-fold. He is the link from defence to attack but is also the midfield destroyer. When possession breaks down he is there to stop counter-attacks, by fair means or foul.

Would Jorginho have been as effective in that role? Almost certainly not. The 26-year-old is a wonderful deep-lying playmaker but is defensively vulnerable. And that frailty to his game has been exposed more than once this season, most notably against Tottenham Hotspur.

The below graphic highlights the differences between Jorignho and Fernandinho.

Both play in high-possession sides – Chelsea have averaged 67.37 per cent possession in the Premier League this season, City have averaged 70 per cent – but it's clear the Chelsea star's role, likely because of his skill set, is very different. 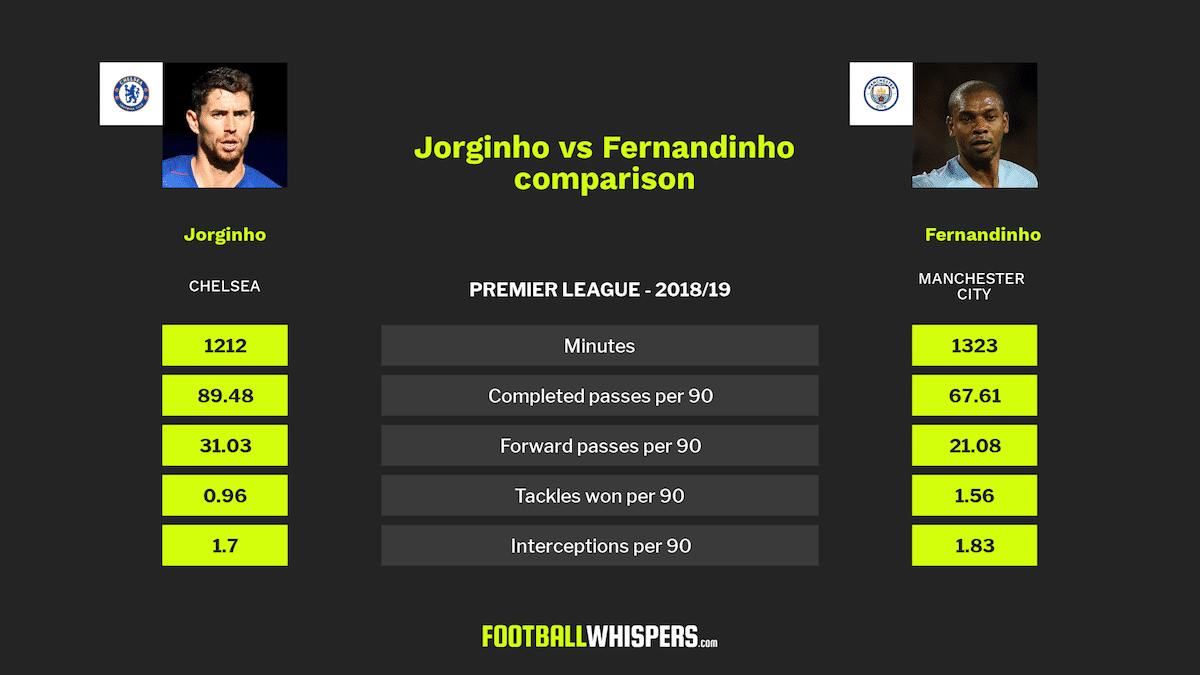 Jorginho is the Blues conductor and his high volume of completed passes highlights that.

He is also more important than Fernandinho in moving his side up the pitch, although the fact the City star plays alongside the likes of David Silva, Bernardo Silva and Kevin De Bruyne makes him less important to build-up passing. He gets it and gives it.

Yet it's without the ball that Fernandinho outshines Sarri's battlefield lieutenant.

He makes more tackles per 90 and slightly more interceptions, and would make even more if he wasn't usually so well-sheltered. He is vital to the defensive phase of City's game and Jorginho, had he moved to the Etihad, wouldn't have been able to replicate that; he simply lacks the mobility required to halt swift counter-attacks.

And City may try to expose that at Stamford Bridge tomorrow. Much like Tottenham, Guardiola's midfielders are likely to swarm around Jorginho to win back possession. Once they do, the Brazilian-born midfielder will struggle to recover.

It's why so much has been made of Sarri's decision to move N'Golo Kanté, perhaps the world's best ball-winning midfielder, to a more advanced role. If Chelsea lose the ball in their half, the World Cup winner is often too far upfield to instantly reclaim it.

Sarri will not change his system, however. Jorginho is his centrepiece and if Chelsea are to succumb to defeat against Manchester City, they will do so playing his style of football.

With Sarri at the helm at Chelsea Jorginho is insulated. He would not have had that same protection at Manchester City. And he quite possibly would've found his game time far more limited.

Guardiola would've had a plan of how to use Jorginho effectively but ultimately Fernandinho, on the basis of this season and last, is a better fit. So perhaps the midfielder's change of heart was a blessing in disguise after all.