A combination of a heart condition, the inevitable affect of ageing and the arrival of Nemanja Matić at Old Trafford last summer have meant Michael Carrick is yet to make a Premier League appearance for Manchester United this season. As such, few were surprised when the 36-year-old club captain recently announced his intention to retire at the end of the current campaign.

The midfield conductor for five Premier League title wins, as well as United's 2008 Champions League triumph, Carrick's influence, though it has waned over the last 12 months, will be missed inside Old Trafford.

But José Mourinho appears to have identified the man he sees as the ideal successor to the former West Ham United and Tottenham Hotspur playmaker: Napoli's Jorginho.

According to The Independent, United have made the Brazil-born Italy international a top target for their midfield revamp this summer.

Currently starring in Napoli's Serie A title challenge, with the Partenopei aiming to end Juventus‘ six-year monopoly of the Scudetto, Jorginho has earned rave reviews for his ability to dictate the tempo of his side's play, create chances for team-mates with his vision and passing technique and break up opposition moves through astute positioning and anticipation.

Such attributes appear to make the 26-year-old the ideal candidate to replace Carrick in the United midfield. Although Matić has come in and added physicality and top-level experience this season, and while the Red Devils have also been linked with moves for the likes of Julian Weigl and Fabinho, none mirror Carrick's skill set in his peak quite like Jorginho.

The former Verona man shares Carrick's positional intelligence, range of passing, reading of the game and calming influence. Indeed, there was outcry in Italy when national team boss Gian Piero Ventura continually overlooked Jorginho throughout the Azzurri‘s doomed 2018 World Cup qualification campaign – he still only has three full caps to his name – with many fans feeling the poise and incision he could have offered might have made the difference.

When it comes to metronomic passers with the ability to bend the tempo of games to their will, there are currently few in Europe on Jorginho's level. Sitting at the base of Napoli's midfield three, he is the conduit through which almost all the attacking moves are filtered for Maurizio Sarri's thrilling side. 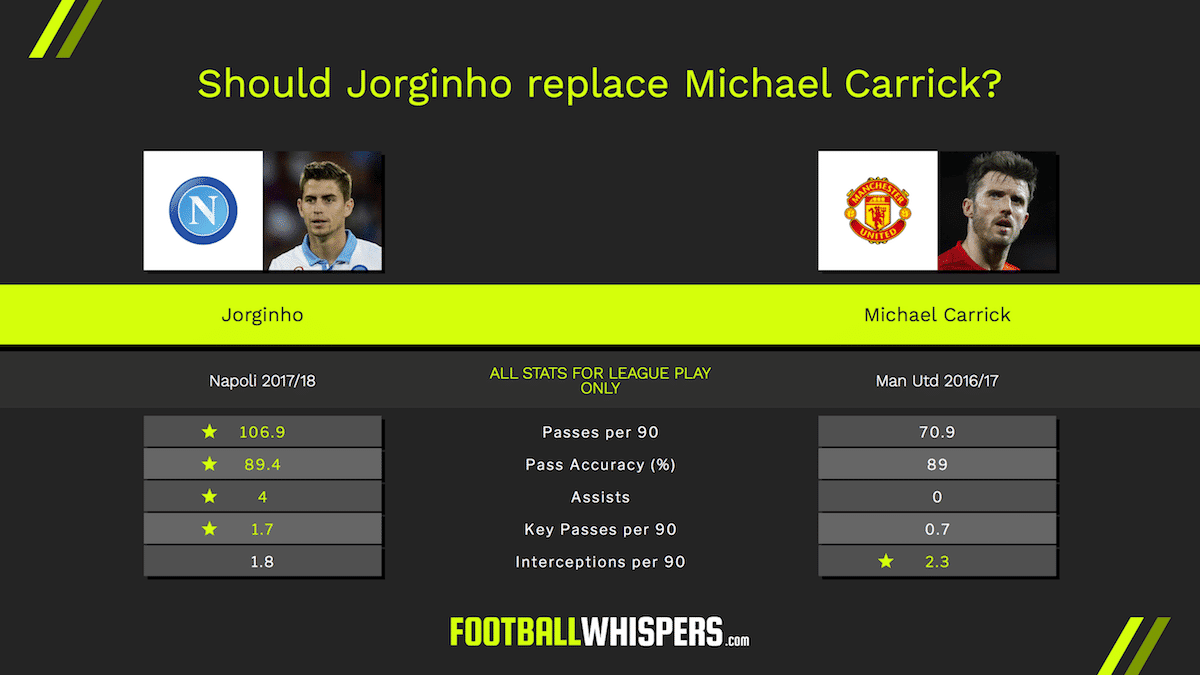 As the above graphic shows, with an average of 106.9 passes per 90 minutes in Serie A this season, Jorginho thrives in taking responsibility for constructing his side's passing moves, often receiving the ball deep in his own half and linking with colleagues to move Napoli up the pitch. Last season, no player in Europe's five major leagues could match his average of 110.9 passes per 90.

Compared to Carrick's numbers from last season – when he remained influential, his introduction into the starting XI in October setting United off on a lengthy unbeaten run – Jorginho is seeing more of the ball, is marginally more accurate in his distribution and is proving to be more creative.

What is key to his readiness to step into Carrick's boots, though, is the fact that he is not the kind of deep-lying midfielder who is unambitious in his passing, happy to safely slide short sideways passes; like Carrick, Jorginho's first thought upon receiving possession is to look forward and pick out a team-mate in an advanced position. 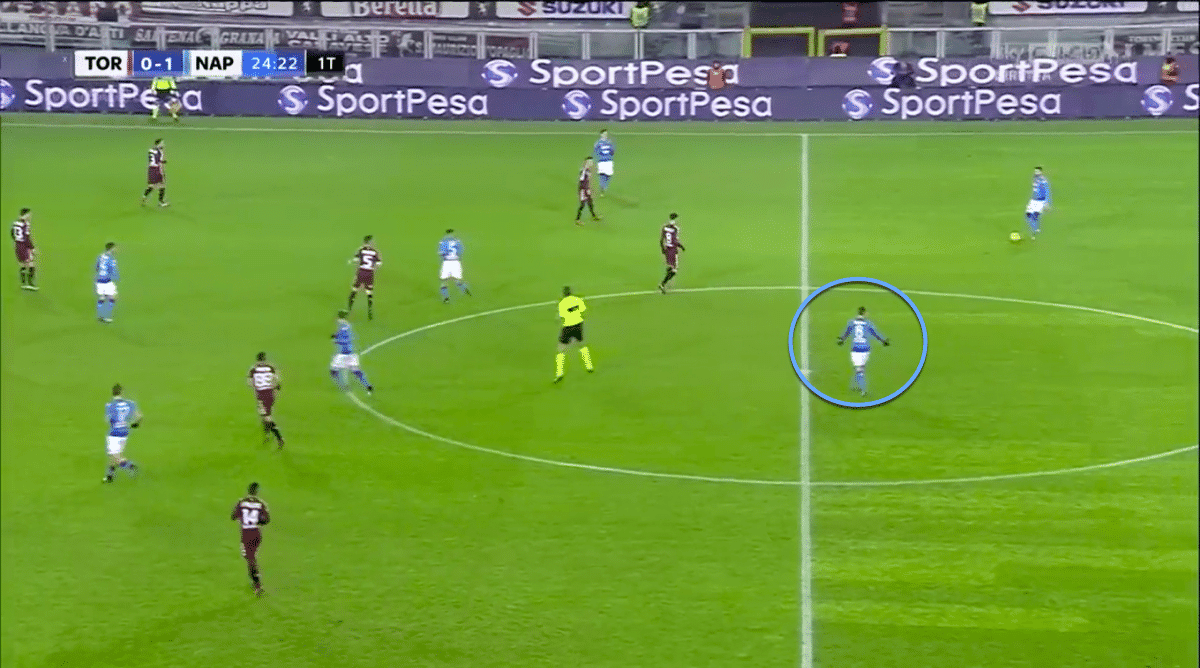 We see his progressive play in evidence in the above image, taken from a recent Napoli win over Torino. Having picked up a pocket of space on the halfway line, Jorginho (circled) demands the ball. 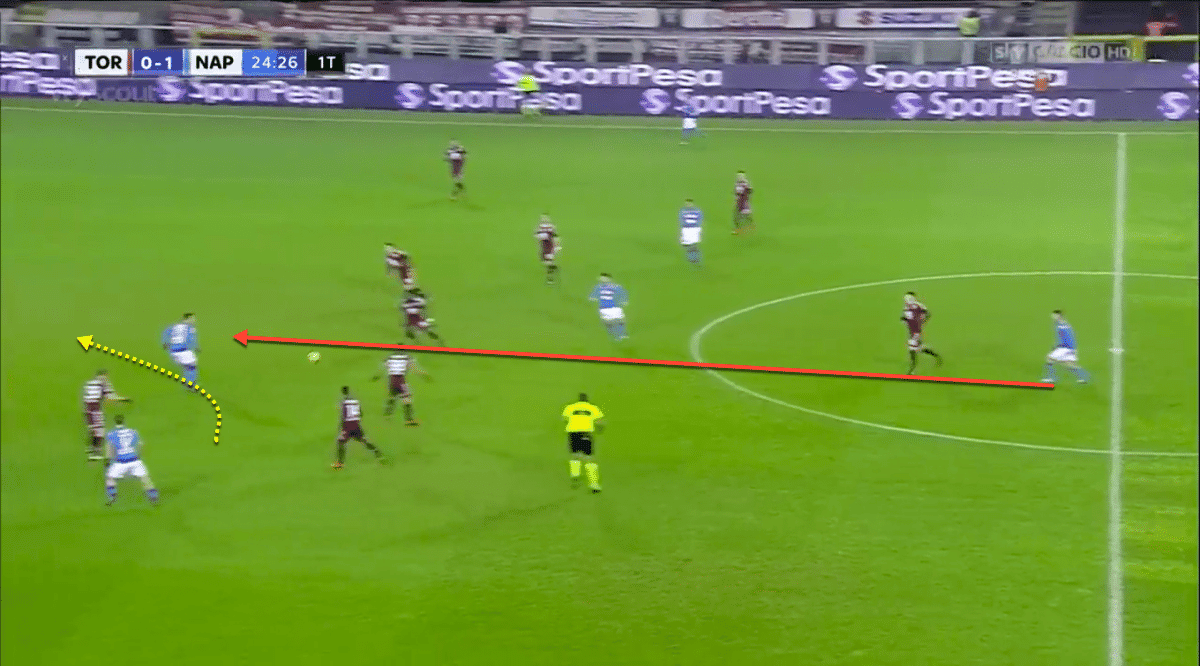 With one touch to set himself and having already surveyed his options, the 26-year-old knows exactly what he will do next, and threads a chance-creating ball through multiple Torino players to find the run of José Callejón; the Spaniard, through on goal, scores. 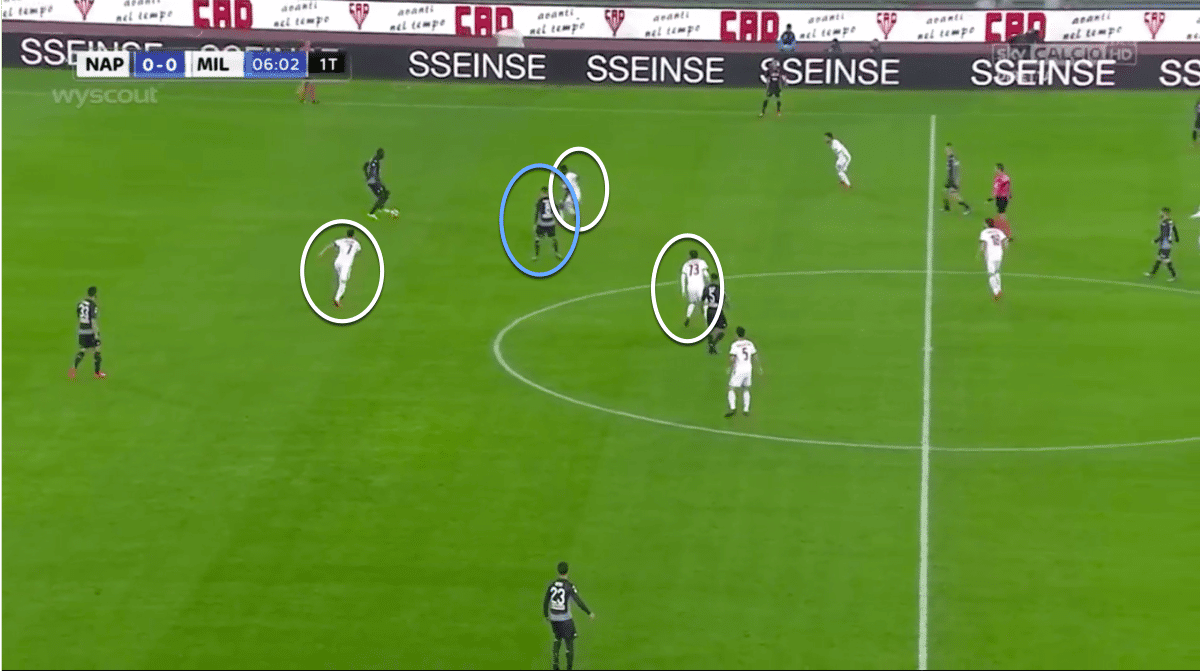 Jorginho will look to make a progressive pass regardless of the pressure he is put under by the opposition, too, evidenced by this sequence from a game against AC Milan. With centre-back Kalidou Koulibaly on the ball, despite having three opponents in close proximity, Jorginho makes himself available as a passing option. 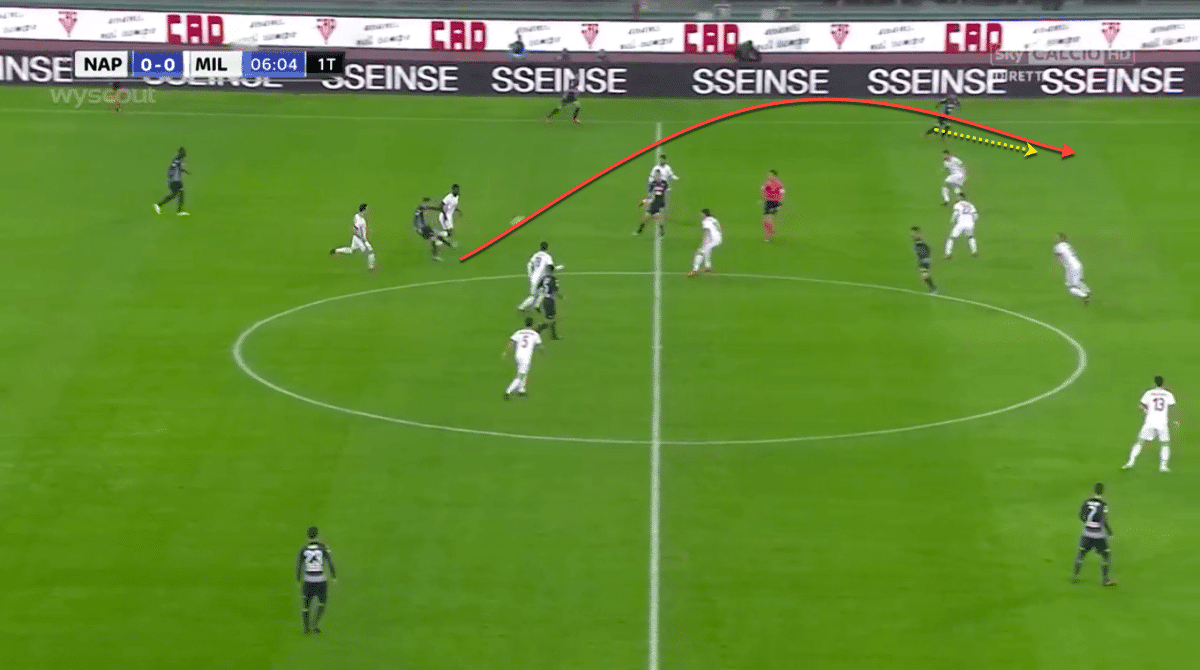 Once again, he knows what he will do with the ball long before he receives it, and  in letting the ball run across his body with his first touch, he is able to turn and face forward despite being instantly closed down. From there, in the blink of an eye, Jorginho releases Lorenzo Insigne into space down the left flank.

The Napoli star's ability to split defences outweighs Carrick's. With four assists and an average of 1.7 key passes per 90, the Italian international is a more regular creator than Carrick was last term.

When looking at the two players' expected goals build-up per 90 averages (xGB90), we see how Jorginho's involvement in passing moves often results in goals being scored. The xGB metric attempts to recognise the contribution of  players who don't score or assist, but who are involved at an early stage in a move that leads to a goal.

Whenever a player is part of an unbroken spell of possession that leads to a shot, no matter if they play the first pass or the last, the xG score of the shot is added to their xGB.

Jorginho's xGB90 of 0.56 means he contributes to Napoli producing chances with an expected goals value or 0.56 every 90 minutes on average, whereas Carrick's xGB90 last season was 0.24.

But ability on the ball, especially in a Mourinho midfield, is only half the requirement; any player looking to occupy the deepest position in United's middle third must also be able to recover the ball.

At 5ft 11ins, Jorginho is neither small nor a powerhouse, but his positioning is such that he is rarely called into physical one-on-one battles, and on the occasions that he is, he's aggressive enough to snappily win possession. 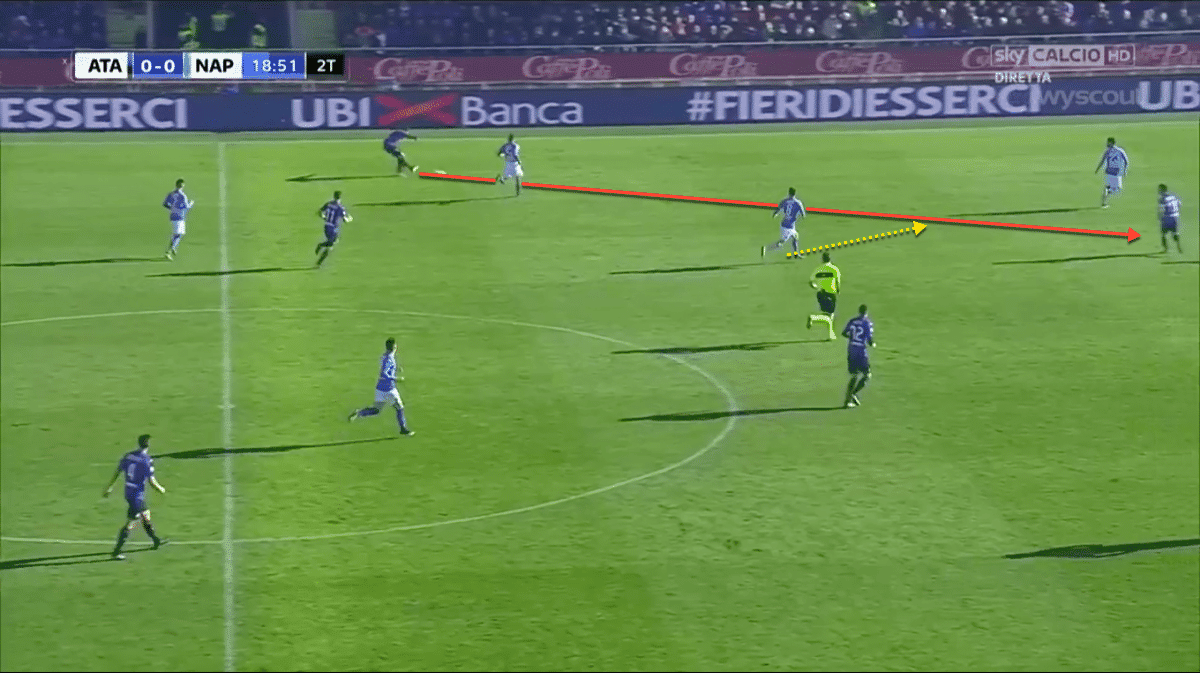 Taken from a recent win over Atalanta, the above image shows Jorgingo reading play to cut out a potentially dangerous pass from the left-back into the attacking third. 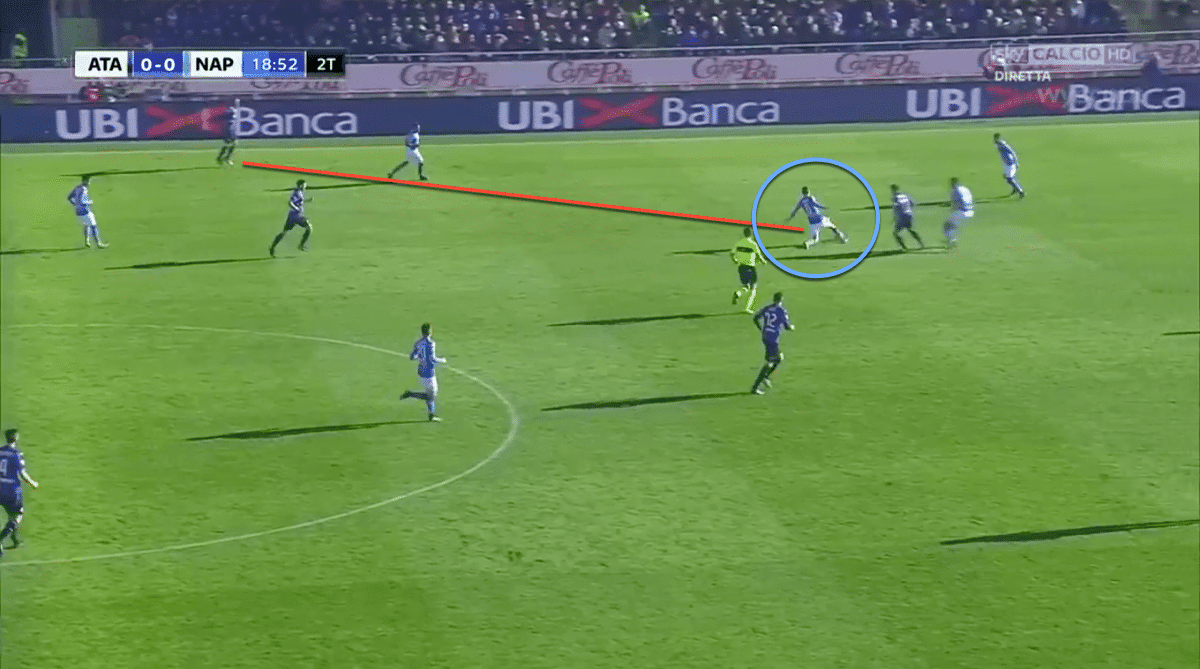 Having read the opponent's intentions, Jorginho nips in ahead of the intended target for the pass to steal possession, deflecting the ball into the path of a team-mate. 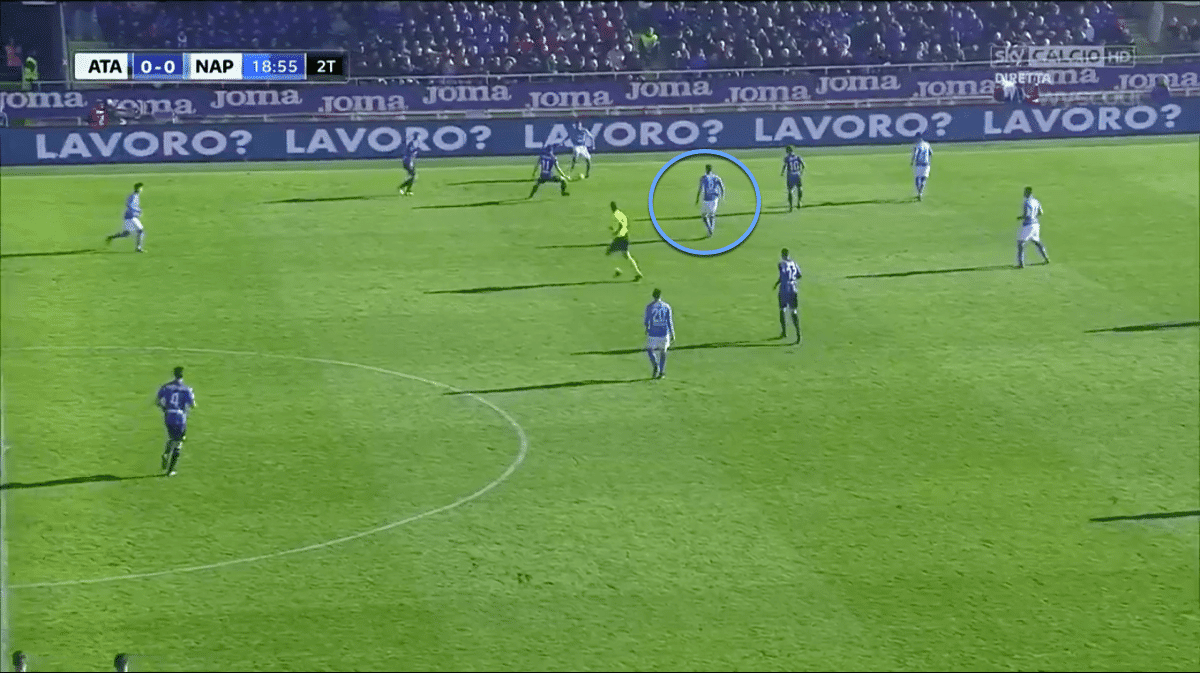 The Napoli conductor is then instantly back on his feet, finding pocket of space and yet again making himself available as a passing option as the Partenopei work their way out from the back.

Mourinho is not only looking for a player who can fill the void Carrick will leave behind, though: he is also searching for a deep-lying playmaker who can dovetail with Paul Pogba, allowing the Frenchman the ability to roam from his midfield station, and someone who can pick out the £89million man in advanced positions.

While Matić has done an admirable job thus far at Old Trafford and has certainly aided Pogba's form this term, adding Jorginho to the base of the United midfield would replicate the relationship Pogba enjoyed with Andrea Pirlo at Juventus.

The Red Devils are still seeking the best midfield combination to enable Pogba to thrive, and with Jorginho playing the Pirlo role at the base of a trio, Matić, Ander Herrera or potentially another new arrival mimicking Arturo Vidal's energy in a shuttling role on the right, Mourinho could strike the perfect balance.