We’re only just into November but the assist of the Premier League season may already have taken place. And it came direct from the boot of an unlikely source.

Jorginho conjured up something special during Chelsea’s win over Watford when he swept a first-time pass forward, from just ahead of the half-way line, right into the path of Tammy Abraham. The clinical No.9 was able to latch onto the ball and loft it over Ben Foster to give Frank Lampard’s men an early lead.

At first glance, it looks kind of simple. But then you notice Jorginho had to avoid Abdoulaye Doucouré, the Watford player looking to close him down. Not only that, though, the adopted Italian also had to weight the pass perfectly to give Abraham a chance to reach it ahead of Foster. All without taking a touch.

It’s the latest and perhaps the most memorable of a long line of standout moments for the 27-year-old. He’s pulling the strings for an inexperienced Chelsea side while stepping up defensively in the absence of N’Golo Kanté.

Fans have seen the value of the former Napoli man and they appreciate him for what he is. It was a different story 12 months ago, however.

Jorginho was the poster boy for Maurizio Sarri’s Chelsea side. He arrived from Naples with the Italian tactician and was viewed as the reason Kanté was being misused.

It was a drastic change and fans resisted it. Jorginho felt the ire of the supporters with SarriBall not convincing many there was a place for it in the Premier League. There was even talk during the summer months that the Chelsea No.5 would follow Sarri back to Italy, with Juventus reportedly keen on the one-time Manchester City transfer target.

But, to the surprise of many, he remained at Stamford Bridge. Not only that, he was part of Frank Lampard’s starting XI. Perhaps aided by Kanté’s injury, Jorginho has managed to carve out a role for himself in the new-look Chelsea side. And the Premier League is finally seeing why so many of Europe’s elite had an interest in him during his time in Naples.

For starters, his traits match up perfectly with Lampard’s tactics and system. The former goalscoring midfielder instructs his team to play free-flowing, fast football.

The off-the-ball movement works well with Jorginho’s vision and on-ball ability. But it isn't just in possession that the midfield maestro is having a greater impact this season. 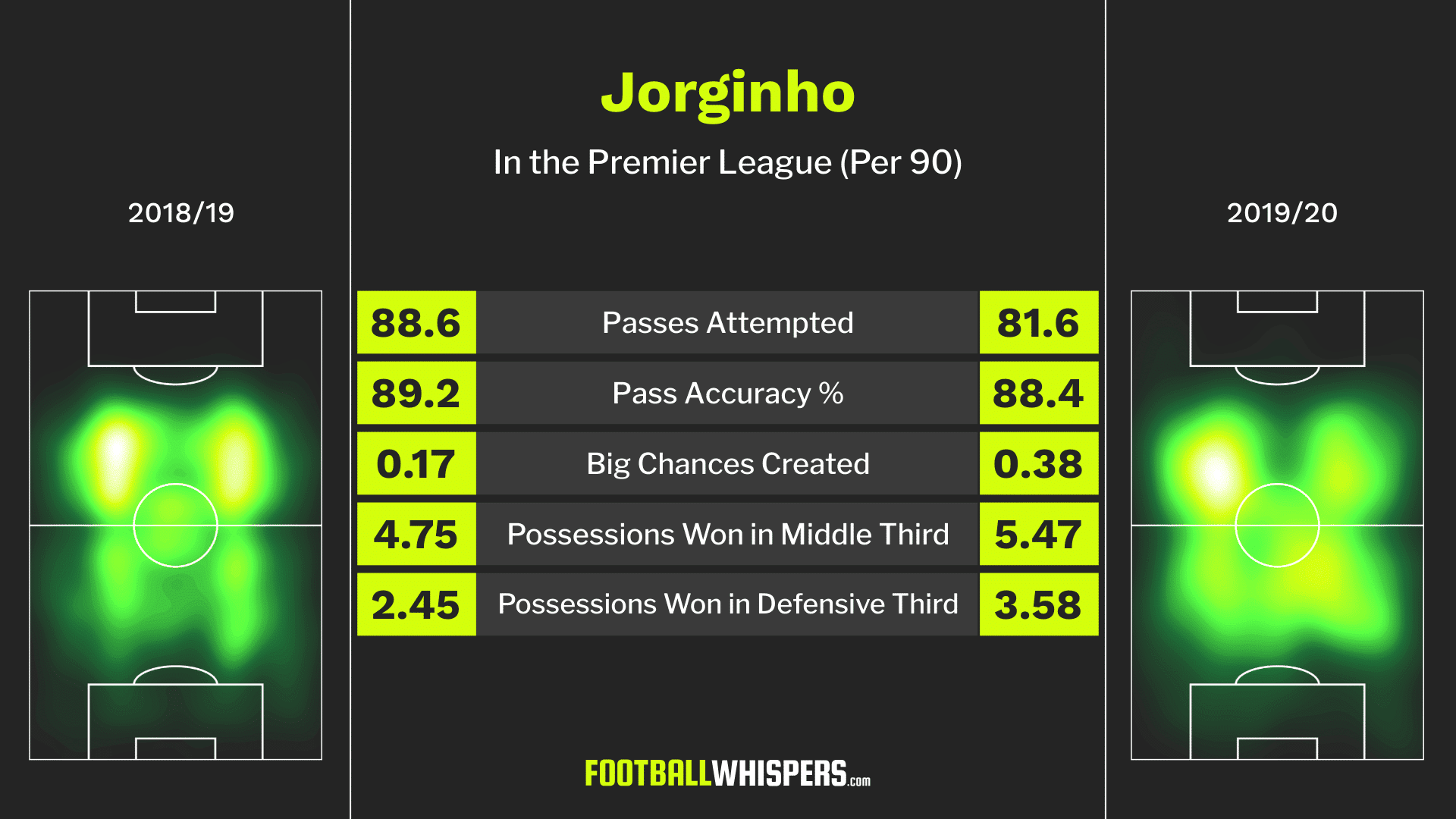 While he's more than doubled the big chances he's created on a per 90 basis despite averaging fewer passes so far in the Premier League, it's actually the defensive side of his game that has caught the eye.

Usually deployed alongside a dribbler in Mateo Kovačić, Jorginho is tasked with shoring up the middle third and quelling the attacks of the opposition. You could argue he's failed to do that, with Chelsea conceding on average 1.5 goals per 90. But that's a byproduct of the system the Blues are now using. The more attack-minded you are, the more open you are defensively.

This Chelsea side has shades of Jürgen Klopp's Liverpool team during his second season in charge at Anfield. The Reds scored a lot of goals but they also conceded at an alarming rate, too.

When you commit so many bodies forward you're always open to getting hit on the break. It's near impossible to score goals without conceding them when your system relies on transitional moments. Chelsea need this style to get the best out of the players they have. Shutting up shop and playing possession-based football will nullify them more than it does the opposition.

The fact Jorginho's defensive numbers have jumped up this year highlights he's adapting to the new demands being placed on him. He's winning possession back more this season, especially in key areas such as the defensive and middle thirds.

He's stopping the opposition and springing counters, often almost simultaneously. It's in these frenetic and chaotic moments that he's really able to shine. He's calm and composed on the ball and that is largely why he's able to play these decisive and incisive passes to decimate defensive lines.

He isn't getting the same praise as Abraham, Mason Mount or Fikayo Tomori, but Jorginho's been just as instrumental in Lampard getting off to such a good start at Stamford Bridge.