Since crashing out of the FA Cup at the hands of West Bromwich Albion, Liverpool have been in near perfect form. The Reds have won four of their last five, scoring 16 goals in the process and conceding just the three.

Jürgen Klopp's men find themselves just two points behind second-placed Manchester United in the Premier League and, barring a historic collapse in the second leg against Porto, are through to the quarter-finals of the Champions League. If you're a Liverpool fan, life is good.

However, as with most teams, there are weaknesses within the squad. Weaknesses the recruitment team on Merseyside are looking to fix to give Klopp the best chance of adding to the trophy cabinet. Roma goalkeeper Alisson has been touted as the man to bring Simon Mignolet's Liverpool career to an end. The Reds are also in the market to bring in a Philippe Coutinho replacement, though not in the like-for-like sense.

And, according to, Paul Joyce of The Times, Napoli‘s Jorginho is the top midfield target. The Brazil-born Italy international stars at the base of the midfield in Naples having been converted from a box-to-box player by Maurizio Sarri.

In a way, it's not too dissimilar to Liverpool captain Jordan Henderson's career progression at Anfield. He started off as a runner in midfield before Klopp turned him into a No.6, tasked with keeping the play ticking over. Likewise, Juventus transfer target Emre Can is often used as a wide midfielder in a three but plays in place of Henderson when the former Sunderland man is injured – a common occurrence in recent seasons.

With such uncertainty surrounding Can's future, coupled with Henderson's injury record, it's no surprise to see Liverpool looking at players in the Jorginho mould. The shock, however, is the fact it is the ex-Verona man. He's been linked with big hitters in the past and the Reds usually target players with potential as opposed to the finished product.

But, armed with the Coutinho money and a manager most players want to play for, it appears Liverpool are now in the market for ready-made players who can make an immediate impact.

Why is Jorginho a Liverpool transfer target?

The recruitment team at Anfield are familiar with the midfield maestro. There are reports from the winter of 2014 linking the Reds with a move for the player. It was the same window they tried to sign Mohamed Salah before Chelsea pipped them to the post.

Liverpool, eventually, signed Can. Was the Germany international an alternative to Jorginho in the first place? Could the Reds now be signing their first-choice target, just four years down the line?

The 26-year-old has caught the eye, especially this season, with his ability to dictate the tempo for the Serie A leaders and break up opposition moves through astute positioning and anticipation.

His biggest strength, by far, is his ability create high-quality chances for team-mates with his vision and passing technique.

Having developed under ex-Reds boss Rafael Benítez, who has an eye for midfielders, and Sarri he is tactically sound meaning he'd be able to slot into Klopp's organised system.

And, you can see from the graphic below, he'd be quite the upgrade on what the former German has at his disposal. 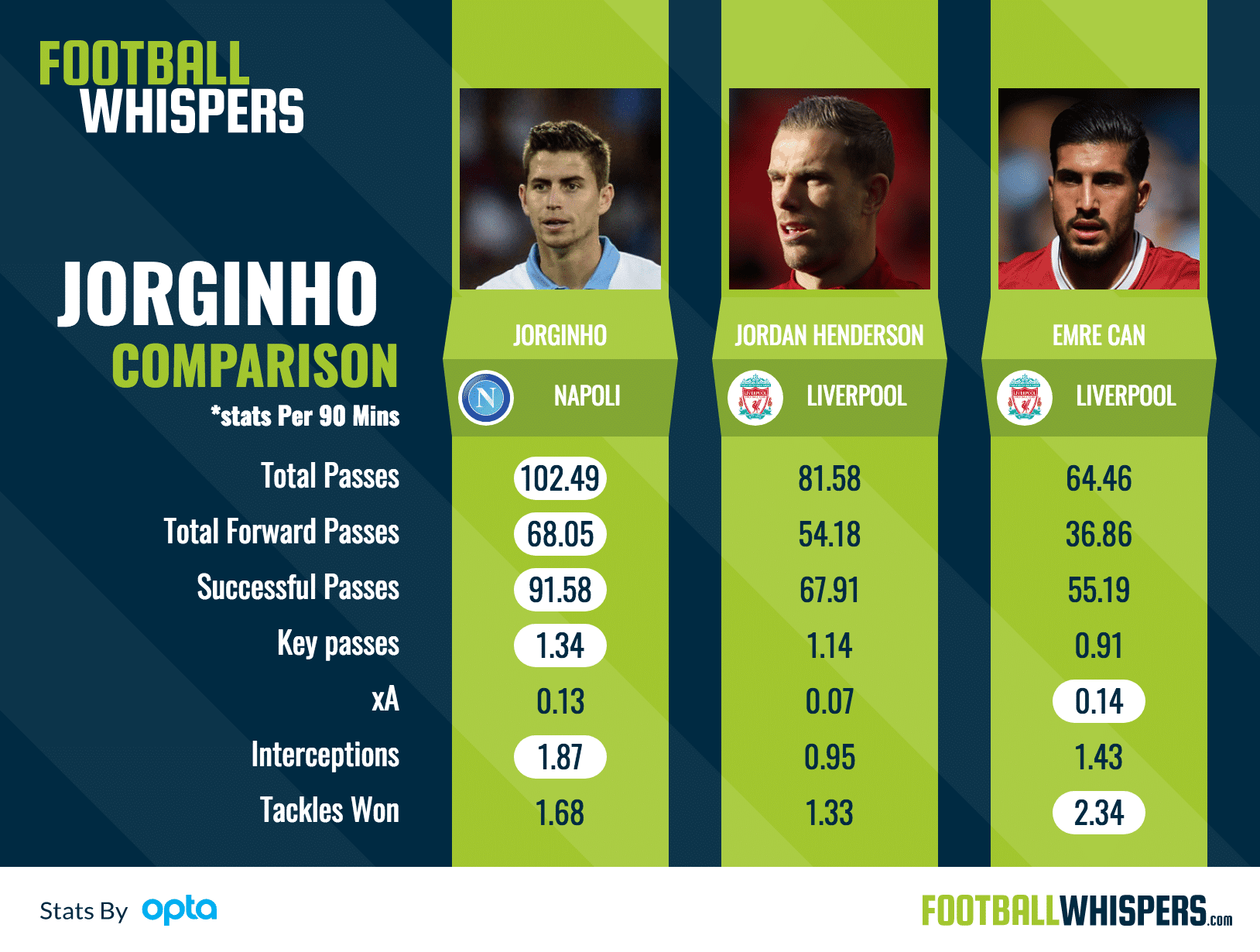 The Napoli playmaker attempts more passes per 90 minutes and has the best pass success rate with 89 per cent. Can comes in second when looking at pass completion (85 per cent) with Henderson just behind (83 per cent). Jorginho's stats are even more impressive when you consider he's playing risky passes on a regular basis in an attempt to unlock defences.

In terms of passes forward, he's tied with Henderson on 66 per cent. Of Can's 64.46 passes only 57 per cent of them go forward. However, it's worth noting his stats are skewed slightly due to him playing as a central midfielder at times this season meaning he's in the final third a lot more than the two he's being compared to.

The Napoli No.8 makes more key passes per 90 minutes and his xA (expected goals assisted) is almost double that of Henderson's. In terms of interceptions and tackles won, he's averaging 3.55, 0.67 more than the Liverpool captain on a per 90 minute basis.

He does everything Henderson can do, just better.

Furthermore, he'd allow Naby Keïta the freedom to do what he does best, just like he does for Marek Hamšik at the Stadio San Paolo. For Napoli he, more often than not, plays alongside two box-to-box midfielders so is used to having to cover when there's a turnover in possession.

At times this season Liverpool have struggled when they've come up against teams using a low block – sides who sit deep and allow Klopp's men to dictate the ball while they dictate the space. It's not happened as often as of late, with Salah, Roberto Firmino and Sadio Manè all firing, but draws in the Premier League have been their undoing. Burnley are the only team inside of the top ten to have drawn more matches.

You can forgive draws against Chelsea, Manchester United, Arsenal and Spurs. But teams with title aspirations should be beating West Brom, Everton, Burnley, Newcastle United and Watford.

The common theme in most of those matches was the lack of guile on show. Likewise, the defeat to Swansea City saw Liverpool just run out of ideas going forward and they resorting to just crossing balls into the area.

Jorginho could be their skeleton key. His ingenuity on the ball could literally be the difference between a top four challenge and battling it out for the title next season. 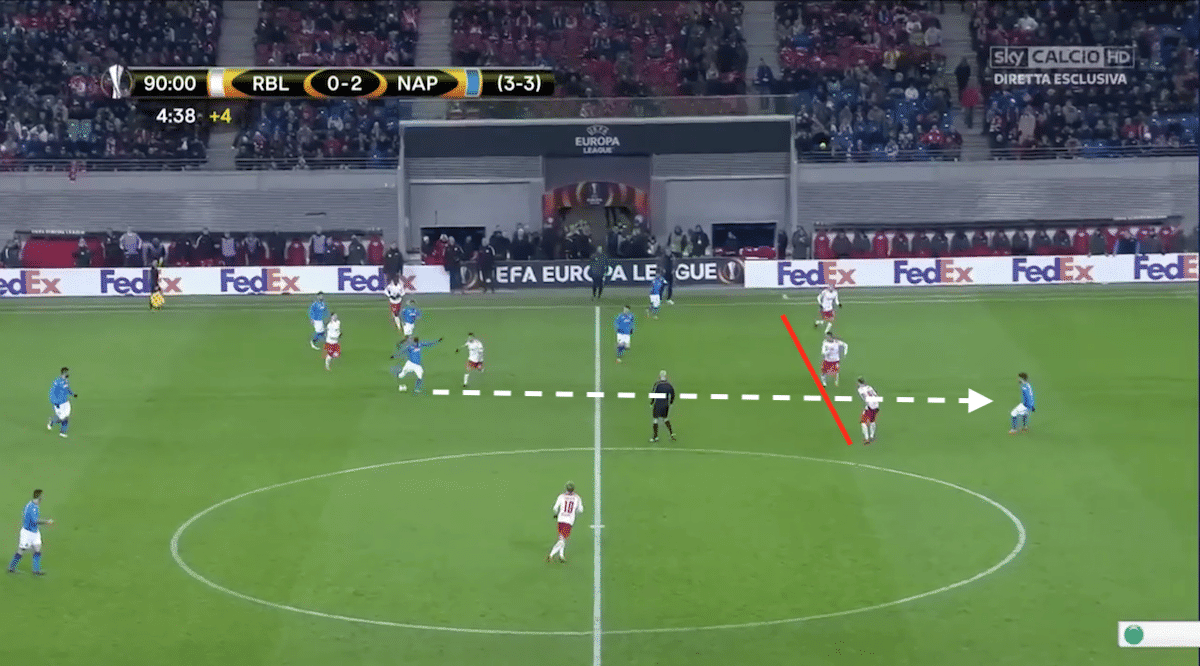 In the picture above you see Jorginho in possession of the ball. Napoli, despite being 2-0 up on the night, need another goal to progress in the Europa League. RB Leipzig have eight men behind the ball and there's no obvious passing option on the the Italian midfielder. The one highlighted can easily be cut out.

Jorginho, rushed into playing a pass by the RB Leipzig man pressing him, manages to float a ball perfectly over the top of Dayot Upamecano and onto the head of Lorenzo Tonelli. Unfortunately for Napoli it's the defender making the run into the area and not Dries Mertens, Lorenzo Insigne, José Callejón or Hamsik.

There wasn't even much space in behind for Jorginho to play that pass and yet he nails it. Imagine the damage Salah and Mané would do with their runs outside to in with him pulling the strings. 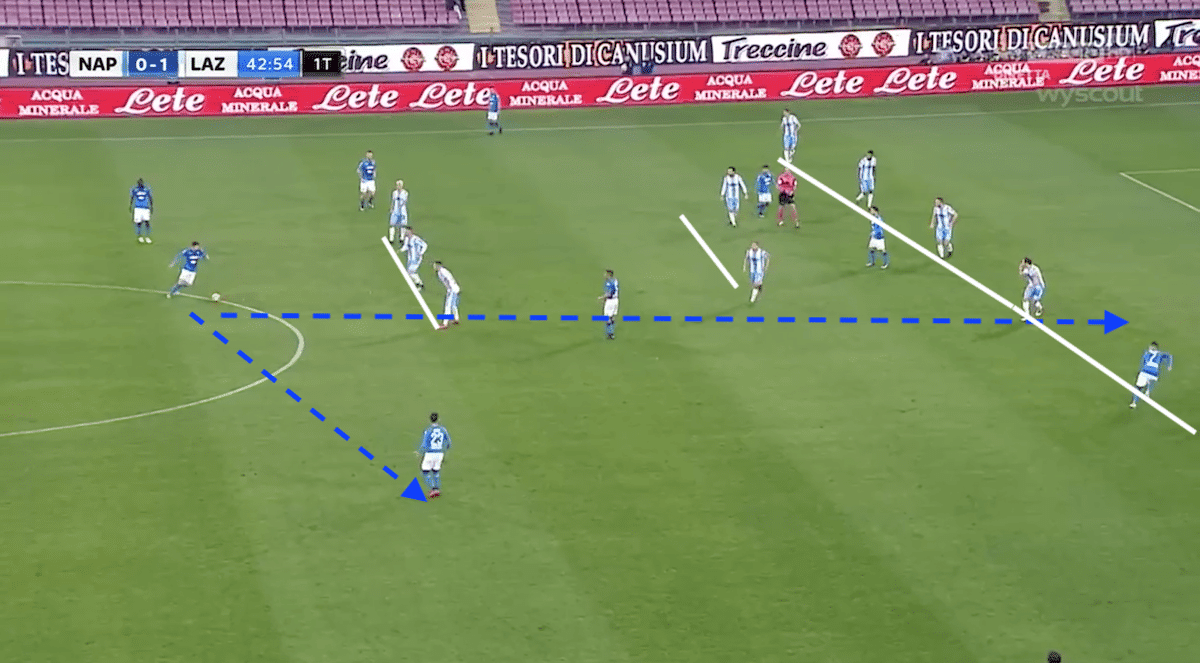 It's a similar story above. Jorginho has picked the ball up in a deep area and Lazio look well organised. Simone Inzaghi's men have all ten outfield players behind the ball, looking to defend their 1-0 lead, and passes into central areas are well blocked. There's a pass to Elseid Hysaj on the right but it's playing into Lazio's hands by keeping the play in wide areas.

Now, Jorginho's pass to Callejón is unnerving. It's weighted superbly, with backspin, and the former Real Madrid man doesn't have to break his stride to bring it under his spell. The ball over the top looks simple but that's because the Italy international makes it look easy. He takes all ten players out of the game. 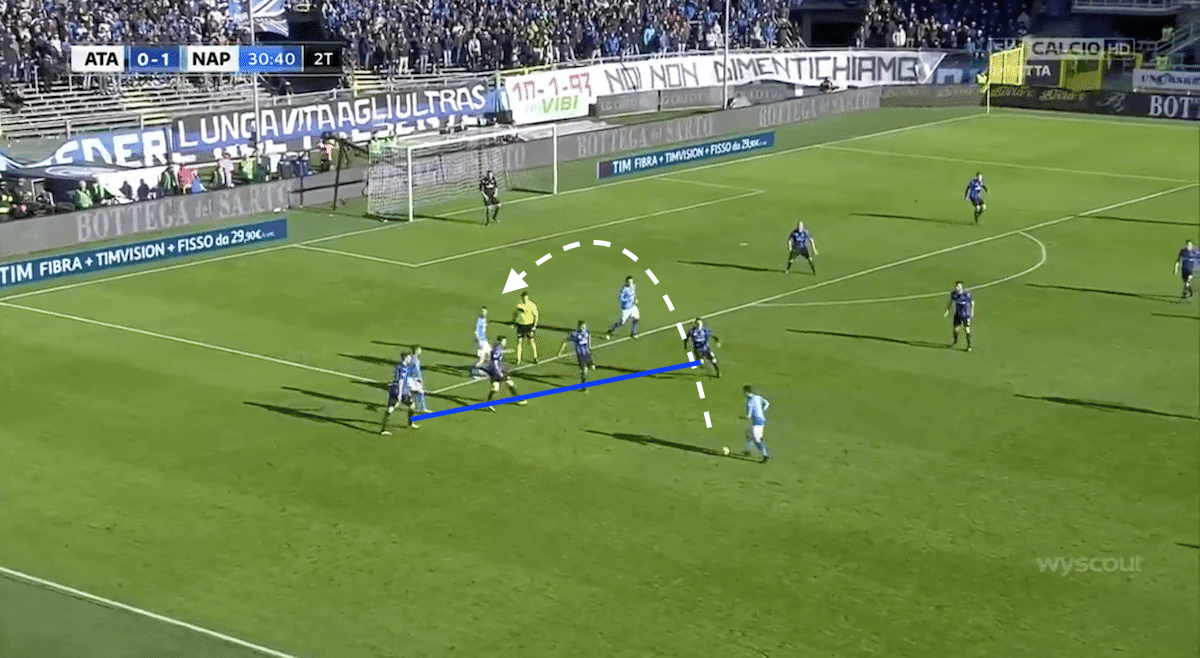 He can do it over short distances, too. In the above, against Atalanta, he's in the final third and he's fronted up by three opposition players. They're blocking a pass along the floor and a lofted one is tricky in such a small area of space. It's worth noting here that the Atalanta backline is poorly positioned and definitely helps Jorginho make his mind up.

The No.8, on his weaker left foot, just delicately lifts the ball over the advancing players and into the path of the Insigne. It couldn't have been executed any better and Atalanta are fortunate to get the ball clear before they're punished.

Jorginho seems ideal for Klopp's Liverpool system. For the rumoured £40million he could be yet another bargain arriving on Merseyside from Serie A, just a few years after he was initially identified as a target.