Despite nurturing a number of world-class stars during their fledgeling years, the Belgian Jupiler Pro League continues to be one of the most underrated competitions in Europe.

They pocketed £17million when they sold Wilfred Ndidi to Leicester City and £22million when Sander Berge, the player they signed to replace the Nigerian, departed to join Sheffield United.

However, it is KAA Gent who could be responsible for the most talented Jupiler Pro League export ever. Currently sat in second position, De Buffalo are surprise challengers to Club Brugge this term having only finished fifth last season. While this improvement isn’t solely down to one player, 20-year-old

He’s already matched his return of 12 league goals in 500 fewer minutes and his expected goals total is up, showing he’s now getting into more dangerous areas with greater regularity. The versatile forward has also chipped in with seven assists meaning he's involved in a goal every 93 minutes – a significant improvement on 151 minutes during 2018/19.

The Brooklyn-born Canada international has been in Belgium for just over two years having joined Gent from Ottawa Internationals SC in January 2018. He had to wait until the August that year to make his debut in the league but he netted a late equaliser against Zulte Waregem. He followed that with another goal in the Europa League third-round qualifier against Jagiellonia Białystok.

David went on to notch five goals in as many games and, in the process, earned an improved deal, signing a contract with the club until 2022. After more goals and more impressive performances, Gent added a further year in an attempt to protect their most-valuable asset.

Gent chairman Ivan de Witte says the club value David in the region of £18million. A huge fee for the Belgian side but a drop in the ocean for Premier League clubs. And with David stealing the show on a more regular basis, the vultures are beginning to circle. 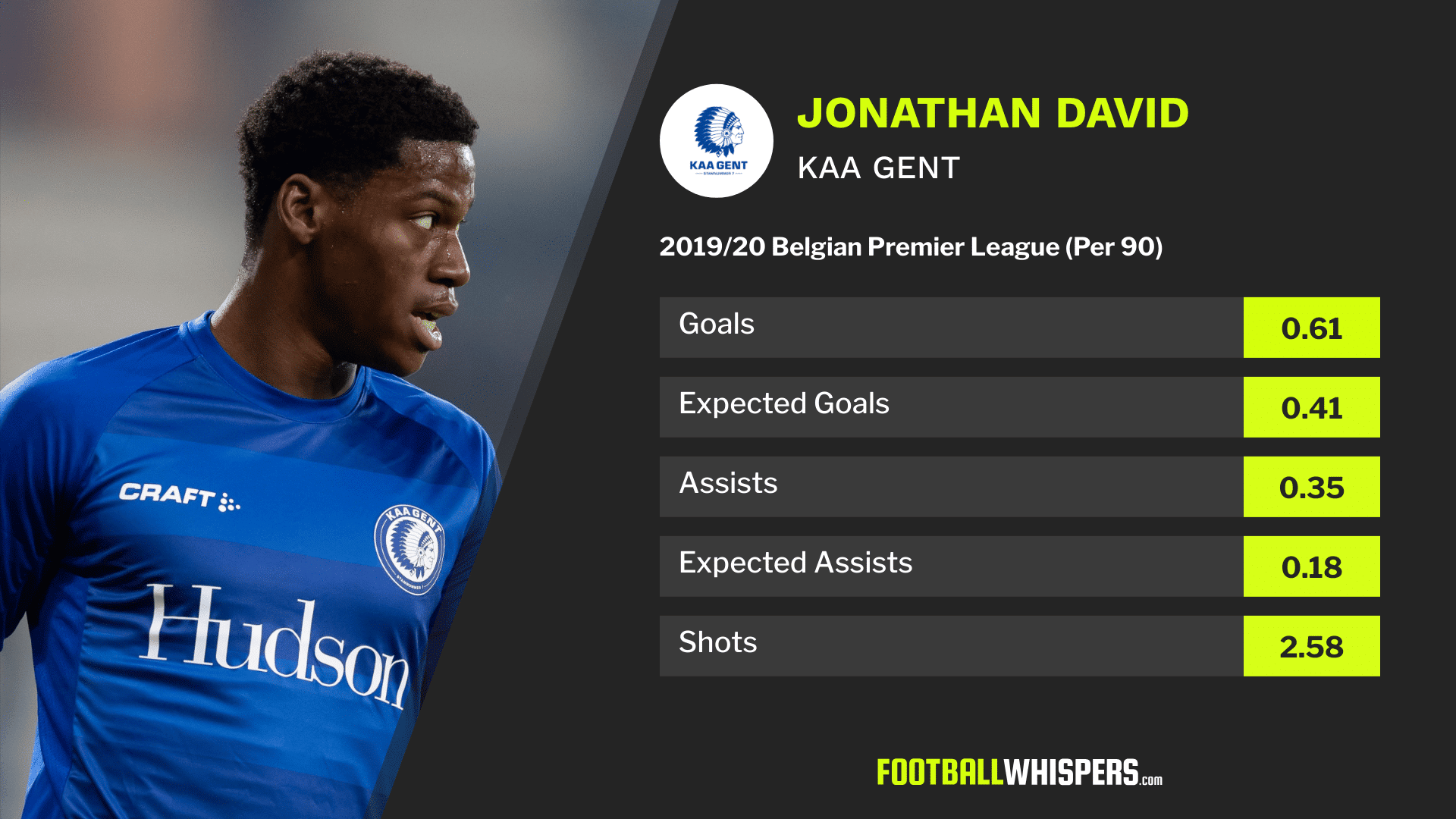 Gent play a 4-3-1-2 shape and David has operated as a centre-forward, or as an attacking midfielder behind a front two. It's in the latter that his dribbling ability really comes to the fore. He's attempting close to five dribbles per 90 and completing almost 60 per cent. When he picks up the ball, he causes chaos and that leads to opportunities for David and team-mates.

What really stands out when watching the youngster is his intelligent movement. He's constantly on the move and this is why he's always amongst the goals. The best example of this can be seen below. 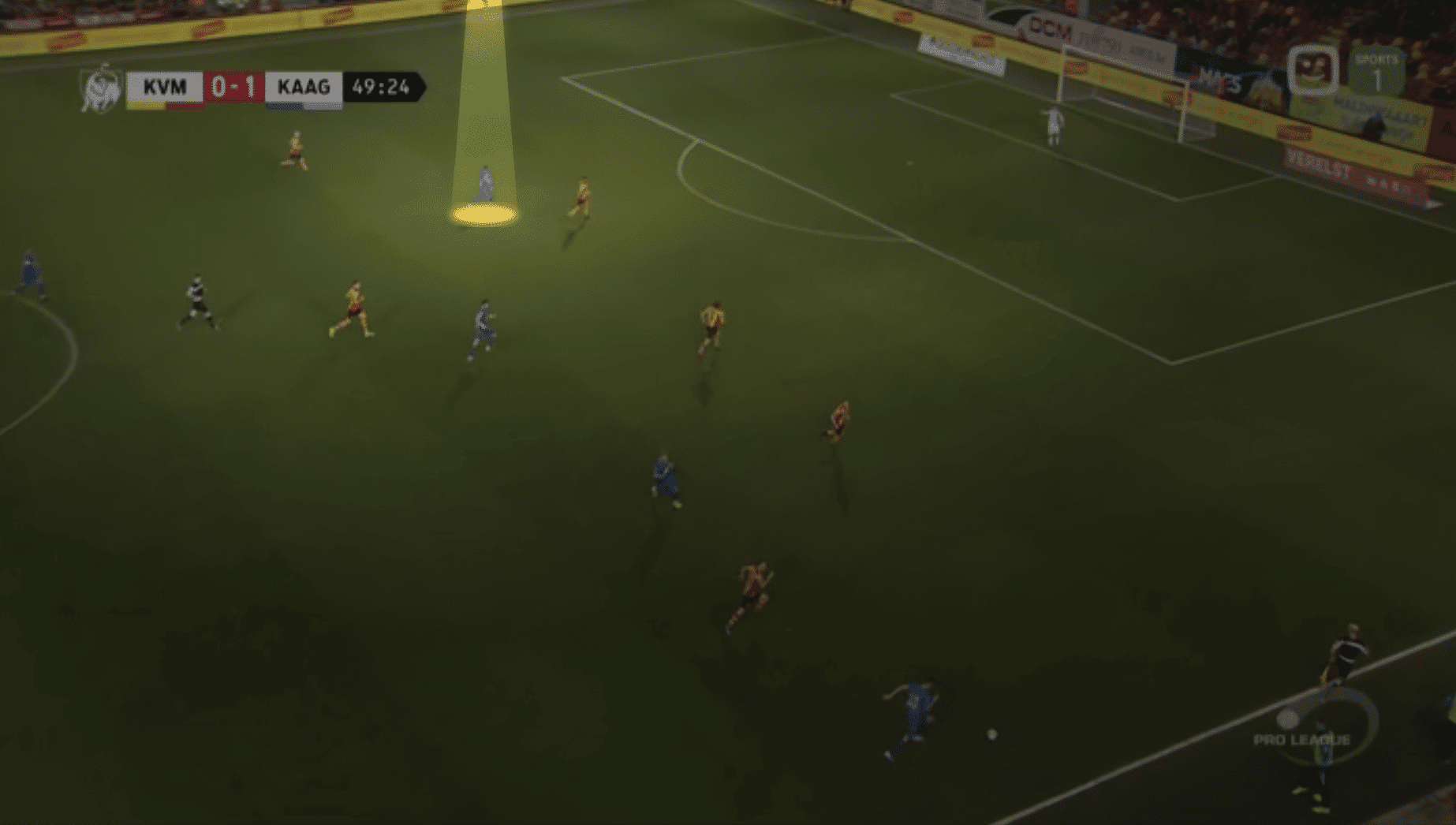 David is highlighted on the left side of the pitch with Gent progressing play down the right. He's positioned well if an early cross comes into the box and across the face of goal. However, it doesn't and the Belgian side look to recycle play. 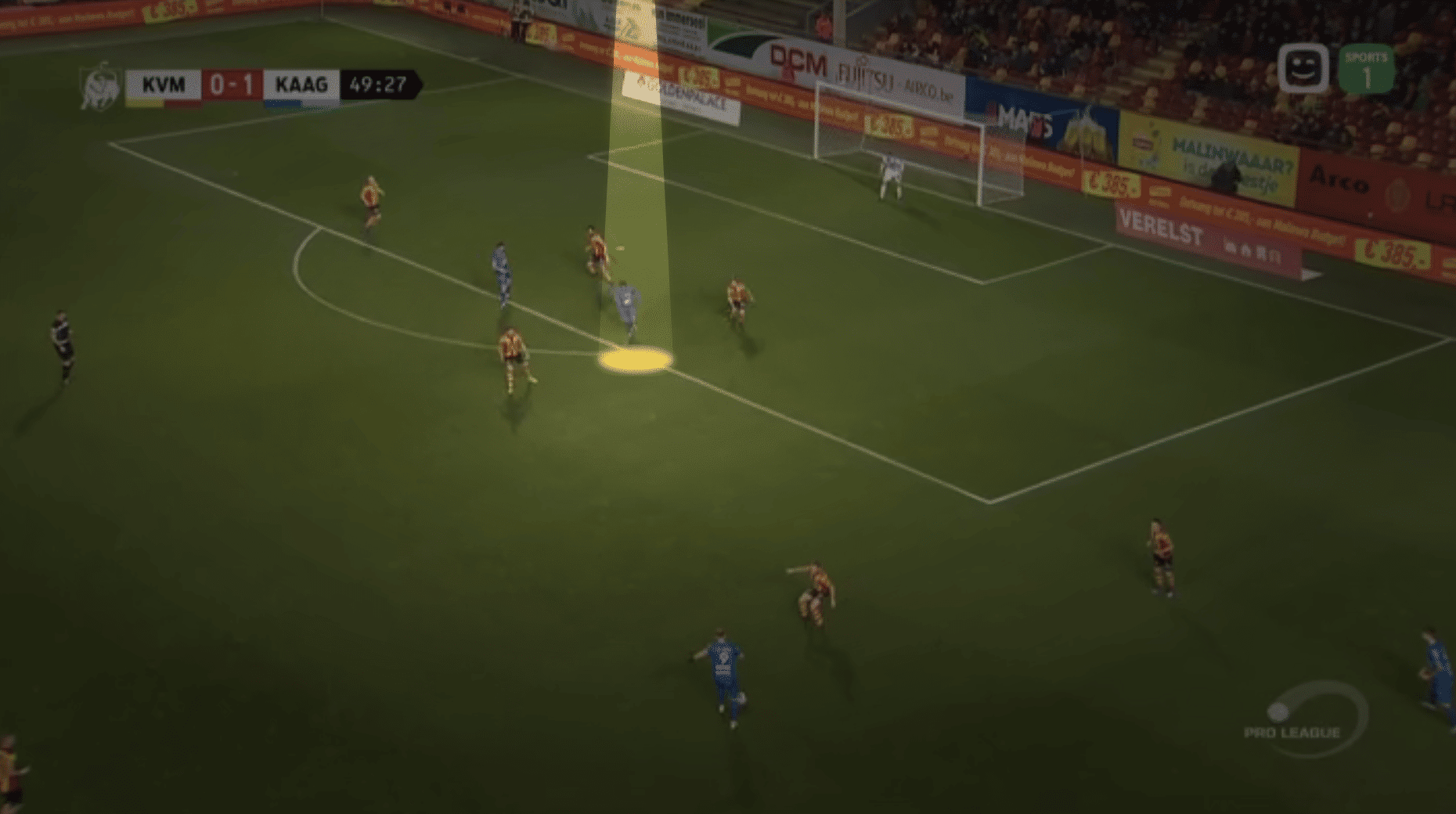 He's no longer looking to get in behind but is instead showing for a pass into feet. However, his team-mate isn't confident enough to play a risky pass and the ball is moved to the left. 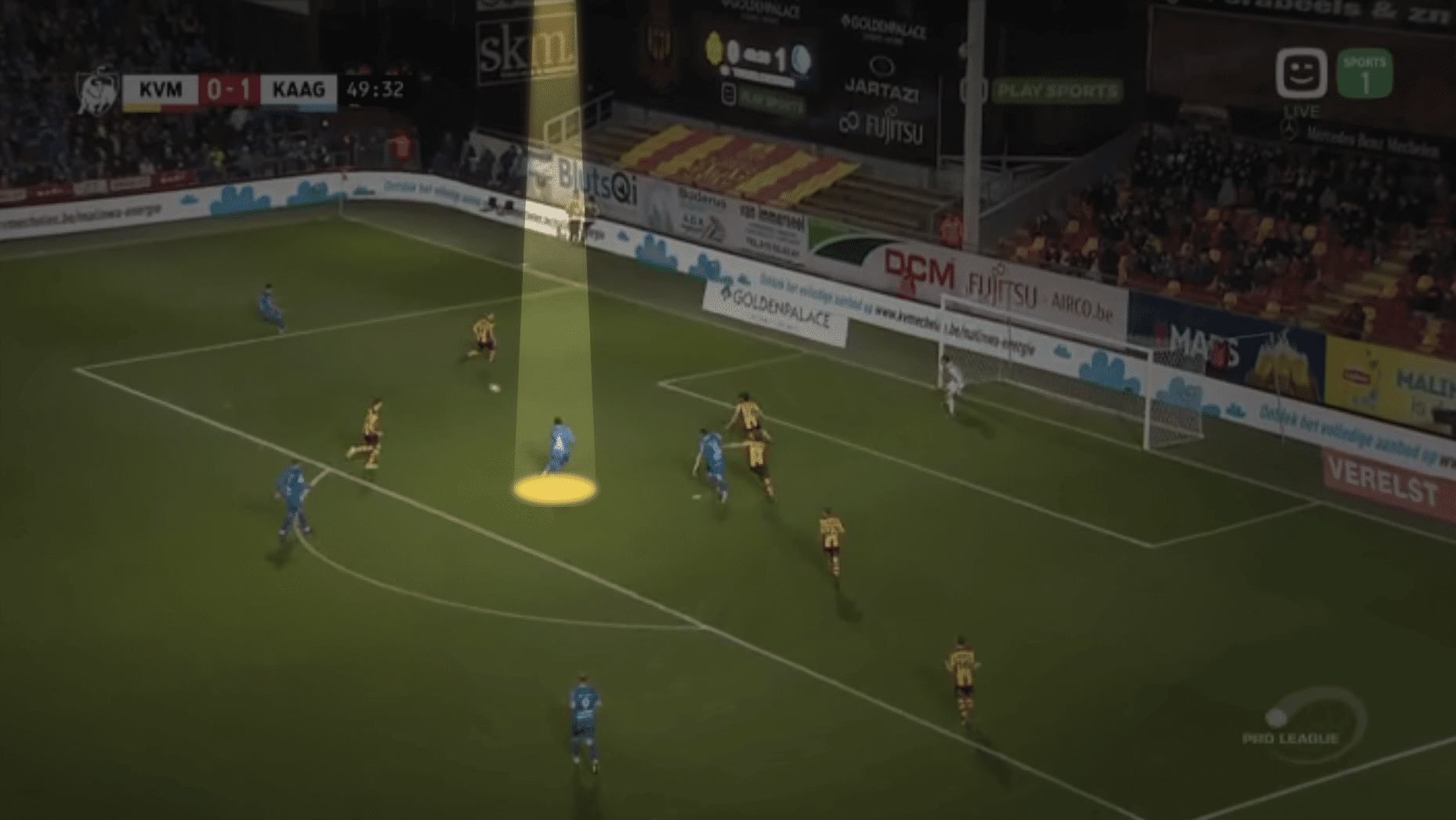 When the ball eventually arrives into the area, David is back on the left side. The cross is cut out but fortunately ricochets into the path of the 20-year-old and he's able to prod home from close range. It looks fairly simple but it never arrives if the Gent man is static.

That was a scrappy, instinctive strike. He's also capable of classier finishes, too. 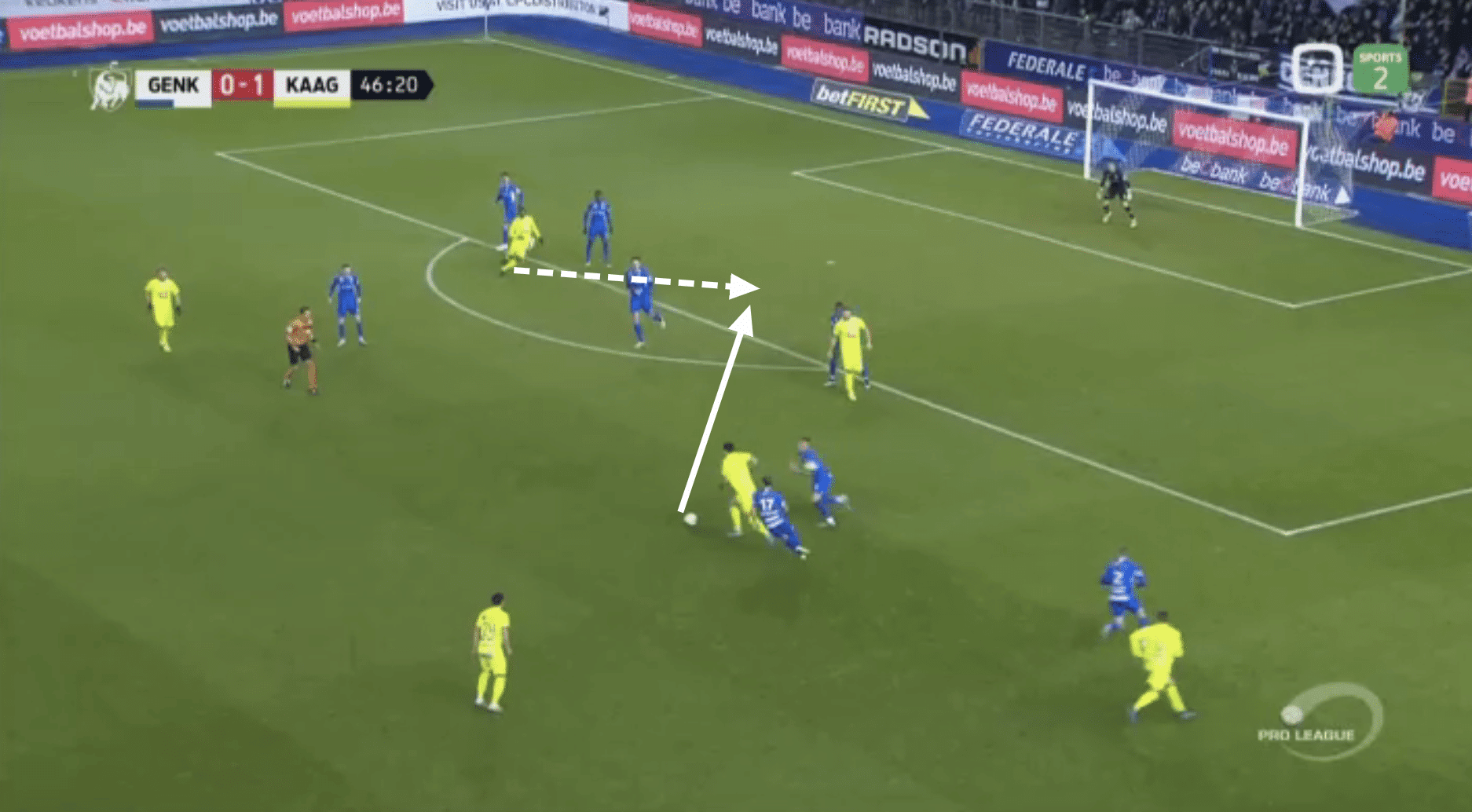 In the still above, David initially offers himself up for a pass to feet before darting across two defences and into the face just inside the penalty area. The goalkeeper rushes out to narrow the angle but the Canada international smartly hits the ball back across goal after taking one touch to steady himself. It nestles in the bottom corner.

The 20-year-old is a goal-getter and a chance creator. He's been involved in 33 league goals since the start of the 2018/19 season. Granted, it is Belgium but David kicked off that campaign as an 18-year-old without a minute of European football under his belt.

What he's doing is special and his potential is downright scary. Premier League clubs would be wise to snap him up quickly.